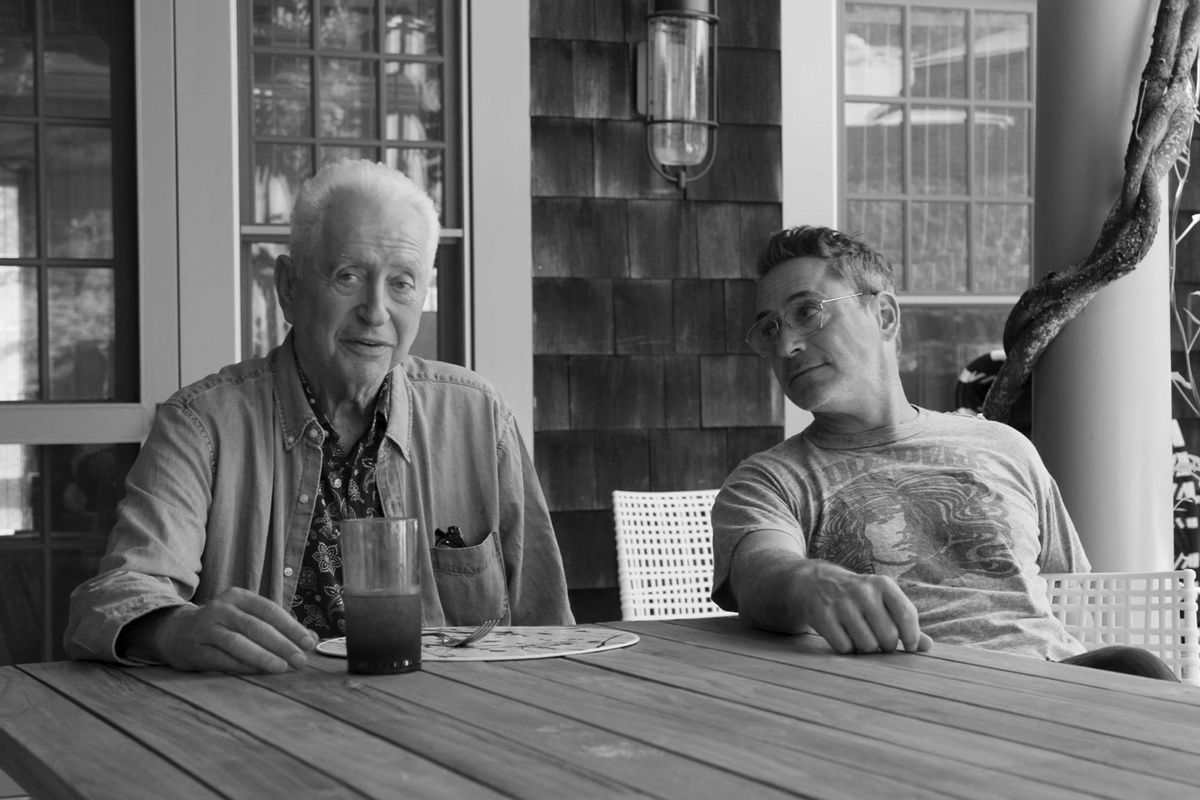 "Sr." is "sweetly narcissistic," as father and son play in the sandbox together.

"Fine by me," or "That ain't bad," is what filmmaker Robert Downey, Sr. said if he really liked something. His casual appraisal masked both his appreciation for an image, a performance, or an event — in life or one of his films — that was weird, banal and profound all at once. Netflix's "Sr." is the affectionate documentary about the groundbreaking, underground, counterculture filmmaker, who is also Robert Downey, Jr.'s father. And it ain't bad. In fact, it is quite wonderful — understated, revealing, poignant, and funny.

Sr. is highly charismatic. Jr. is too; the apple doesn't fall far from the tree. The value of director Chris Smith's documentary is that viewers come to admire and cherish Sr. that it is quite moving when he passes. (Sr. died in July 2021; the documentary was filmed over a three-year period.) Sr. had Parkinson's — "Charlie Parkinson's disease," he called it, presciently, in one of his films. The scenes of Sr. immobile and having episodes of memory loss are painful to watch.

Elvis Mitchell: The success of Black '70s films was "the dirty little secret of American cinema"

"Sr." is "sweetly narcissistic," as father and son play in the sandbox together, making the documentary as well as a side project where Sr. films his own movie. The opening moments show Sr., who always seems to be directing, staging a shot for Smith.

When Jr. interviews Sr. and his wife, Rosemary, it goes like this:

"How long have you been married?" Jr. asks.

"1,500 years," Rosemary responds in a deadpan moment right out of one of Sr.'s absurdist films.

"Sr." lovingly recounts Robert Downey's career behind the camera, featuring "Chafed Elbows," his 1966 feature about a man (George Morgan) who marries his mother (Elsie Downey, Sr.'s then wife and Jr.'s mother) to get welfare checks. It received critical praise and drew audiences, even as Sr. observes, "We didn't know what we were doing, but suddenly, the films were getting better — and weirder."

Eventually, Sr. has his breakout success with "Putney Swope," (1969), an irreverent and wickedly funny satire about a white ad agency that is taken over by a Black man (Arnold Johnson) after the chairman dies. If "Sr." does nothing else, hopefully it will prompt viewers to watch or rewatch "Putney Swope." (This classic is available on the Criterion Channel along with a few other Sr. films.)

The toughest conversations are the ones Sr. does not want to have.

"Sr." is shot mostly in black and white like the early Sr. films, which infuses it with a kind of nostalgia. Sr. often comments about gray days being the best for filming. The moodiness is also reflective of the melancholy of watching a loved one fade away.

Smith's documentary is also loosely structured, like many of Sr.'s films. There are a few scenes where Norman Lear, Alan Arkin and Lawrence Wolf (one of the members of Sr.'s stock company of actors) reflect on their friend. Paul Thomas Anderson, whom Jr. says, "Is the son my dad wishes he had," is seen effusing about Sr. in various clips, and accompanies his hero on a train ride. (Sr. appeared in Anderson's "Boogie Nights" as well as "Magnolia.")

The most revealing moments are the conversations Jr. has as he interviews his father about his life and career to better understand him. These segments are often shot in split screen which allows viewers to see the action/reaction between father and son, which is appealing. Sr. recalls he started writing when he was in the stockade during the army. (He was always a troublemaker.) He explains that because he couldn't find a babysitter, he gave Jr. his first film role in "Pound," Sr.'s 1970 film in which 18 actors play dogs. Jr.'s debut has him asking a Mexican Hairless (Wolf), "Have any hair on your balls?" — a line he didn't understand, but it generates a laugh. (A star is born!) Jr. explains that making films with his father was a way they could spend time together.

The toughest conversations are the ones Sr. does not want to have. They concern Los Angeles — Sr. spent 15 soulless years in LA, which included his making his only studio film, "Up the Academy," a disaster for him professionally. Sr. lost a fight to make the teenage cast younger, and lost interest in the project because of studio interference. He was fine not getting final cut as long as he got final cut on the cocaine, he says. "Sr." briefly addresses both Downeys' drug use, from Sr.'s regret at letting his son partake in drug culture and Jr.'s difficulties with addiction, illustrated with clips from his role in "Less Than Zero."

"Sr." feature many scenes of art imitating life especially as Sr.'s second wife, Laura Ernst, suffered from ALS. The dual topics of illness and addiction formed the basis for Sr.'s 1997 film, "Hugo Pool," which prompts Jr., like a therapist, to ask his dad about processing the grief and pain he felt in his life into his art. A later scene of Jr. talking with his therapist about watching his father slipping away is quite touching.

But there are several comic moments in the film, from asides Sr. has witnessing things in New York City, to Sr. requesting that Jr. perform a German folksong for him. Jr. is accompanied by Sean Hayes on piano in a wonderfully silly episode that even allows them to riff and perform Billy Joel's "My Life."

Throughout "Sr." its subject emphasizes how the best things often happen spontaneously. Smith's film, a love story between father and son, reflects this salient point beautifully.

"Sr." is now streaming on Netflix.