"One nation united under pasta": How the "discovery of pasta" shaped Italy

"Many popular beliefs about the origin and evolution of classic Italian dishes . . . are flat-out wrong" 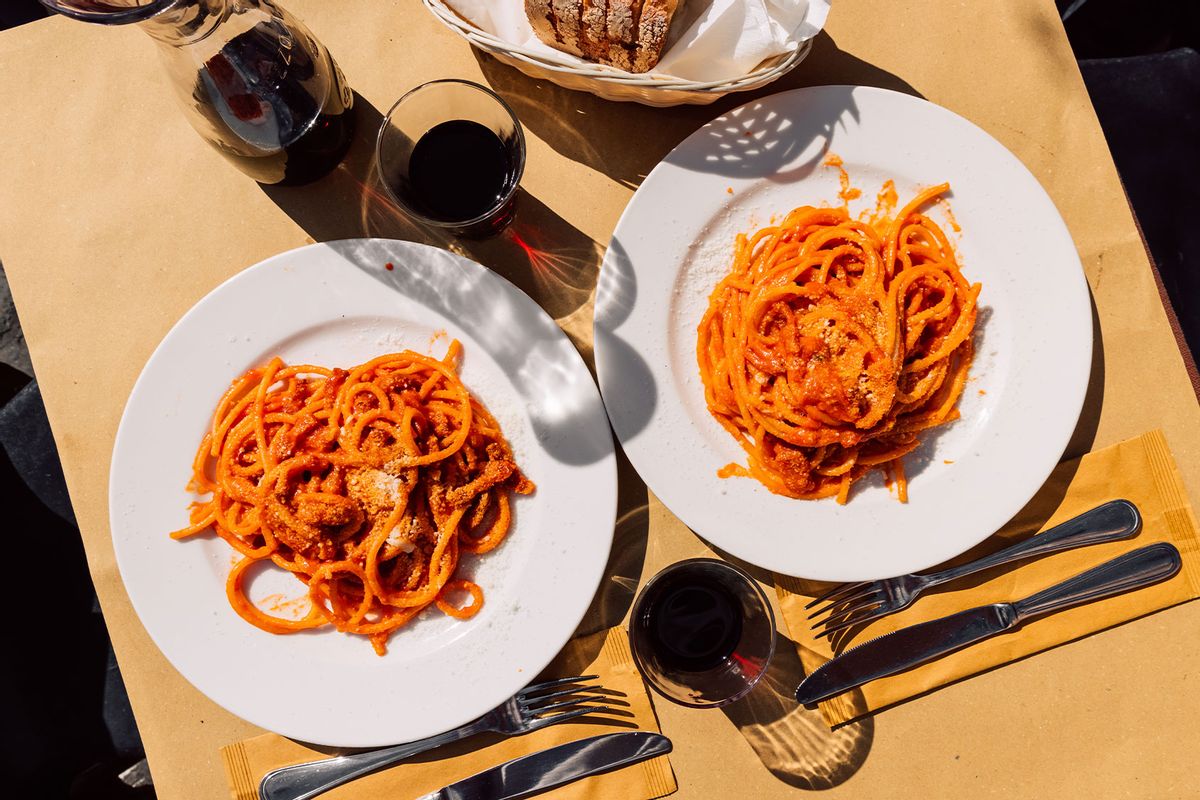 Excerpted from "The Discovery of Pasta" by Luca Cesari, published by Pegasus Books, January 2023. Reprinted with permission.

Anyone who cooks up a dish of pasta, anywhere in the world, can't help thinking of Italian cuisine. Even if they live on another continent and the food has been in their diet for generations, it makes no difference: the Bel Paese is a touchstone by default.

Yet pasta does not just belong to Italy: in the Western world alone, there's Moroccan couscous, Spanish fideuà (a paella made with short, thin noodles instead of rice), and all kinds of filled pasta — German maultaschen, Russian pelmeni, Ukrainian varenyky, the uszka and pierogi of Eastern Europe and so on — which have nothing to do with the Italian tradition and developed on their own.

If you think about it, it's a little strange that a single country in the heart of the Mediterranean developed a culture with hundreds of pasta dishes, up and down the peninsula, that characterize its cuisine more than anything else. In the end, pasta is just one way of eating a dough of water and flour: bake it, and it's a pie, flatbread or pizza; dip it in boiling oil, and it's a fritter (plain or filled), but boil it in water, and you've entered the vast world of pasta.

Definitions are not set in stone, however, and that is why, for the first few centuries of its existence, pasta was not considered a culinary category unto itself. The circumstances of its birth are also rather hazy, and although we know that Sicily was a center of production for dried pasta as early as the twelfth century, the thread of its origins gets lost somewhere back in Classical Greece and the Near East.

Seen from the outside, Italy is one nation united under pasta: families cook it almost every day at home, and very few restaurants fail to offer at least one kind on the menu. There are famous recipes that can be found everywhere and have become true national symbols, like spaghetti with tomato sauce, but most have an extremely local connotation. You can probably find a good carbonara in Milan, or excellent trenette with pesto in Rome, but these dishes are still closely associated with the place where they were invented. If we look a little closer, we will notice that every place has its own specialty, and that the next town over has a different way of cooking what is more or less the same dish. Italian cuisine is built from a myriad of recipes forming an intricate mosaic, whose tiles are hard to make out; the differences are sometimes minimal, and may even hinge on individual family traditions.

Seen from the outside, Italy is one nation united under pasta: families cook it almost every day at home, and very few restaurants fail to offer at least one kind on the menu.

It's a bit like looking at an Impressionist painting: seen from afar, it seems clear enough, but as you get closer the overall picture splits apart and the brushstrokes become an indistinguishable blur.

Since pasta is a food so deeply tied to identity, it becomes a factor distinguishing those who cook it, or rather "know how to cook it," from those who don't; in short, the classic dividing line of "Us and Them," which more or less falls along national boundaries. When Italians go abroad, they can't help being amazed by how pasta is eaten in other countries, and two common errors in particular draw the fiercest criticism. The first is cooking it too long, that is, not al dente: that characteristic consistency where the core is still firm to the bite. A dish of spaghetti or macaroni that is too soft is thought of as a mortal sin, and in Italy would justify sending the food back to the kitchen, although that rarely happens.

The other mistake that "They" often make is serving pasta as a side to meat. Those noodles nestled alongside a bit of roast, or maybe a beef stew? To an Italian, they're completely incomprehensible, because pasta is a primo piatto, a first course, and meat is a secondo, and never the twain shall meet.

What many fierce Italian champions of orthodoxy do not realize is that these two ways of serving pasta were once quite common even back home, and it was from here that they spread abroad over a century ago. "Overcooked" pasta was standard in northern Italy until the early twentieth century; the fashion of cooking it al dente sprang up in the South, and took a long time to work its way up the peninsula and become the national standard. Just a few generations ago, it was normal for a Neapolitan to cook pasta differently compared to someone in Milan.

The habit of using it as a side dish was also quite common. From the Renaissance up to the late nineteenth century, one finds many cookbooks that suggest covering boiled meat, especially poultry such as duck or capon, with macaroni or filled pasta. In Italy, this custom almost completely disappeared over the course of the twentieth century, as pasta carved out its own place on the menu, both at home and in public settings.

Essentially, when Italians criticize this sort of thing, they are revealing the cultural divide that separates them not only from foreigners, but from their own ancient culinary roots.

In countries such as Germany, Britain, France or the United States, pasta was brought by Italian immigrants. Initially considered an interloper at the national table, it took quite a while to be assimilated into those cuisines. And as we know, immigrant communities tend to be protective of their traditions, which they rightfully consider a fundamental part of their identity. So this — along with the fact that contact with their homeland was only sporadic — may be why their cooking preserved some older habits, continuing down a path that Italy diverged from. In much the same way that a language cut off from its country of origin tends to evolve separately, holding on to some archaic patterns of speech.

This led to hybridized cuisines that have every right to exist, but almost never reflect contemporary Italian usage.

For instance, Italian American cooking, with its spaghetti and meatballs, chicken Alfredo or macaroni and cheese: recipes that all evolved out of traditional Italian ones, but are now only distantly related to those original delicacies and have no real counterpart in Italy. The famous macaroni dish so common in the US and UK actually echoes the oldest way of eating pasta — topped with cheese alone — but remains a specialty of the English-speaking world, and you'd never find it on a restaurant menu in my country.

Pasta becomes entangled with cultural identity not just in relation to foreigners, but even — and one might say above all — when Italians are talking to other Italians. Endless arguments over the "authentic" recipe for a given speciality are par for the course. This maniacal attachment to our foods usually causes considerable amusement among non-Italians, who can't see why, say, the very notion of breaking spaghetti in half to fit it in the pot, or of adding a spoonful of tomato sauce to carbonara, should be such hot-button issues.

Pasta becomes entangled with cultural identity not just in relation to foreigners, but even — and one might say above all — when Italians are talking to other Italians.

In Italy, there have always been foods associated with a given region, and examples can be found all the way back to the Middle Ages, although they are often individual products rather than actual dishes.

Even in those days certain foods had a special relationship with their place of origin, but there was nothing resembling the fanatical attachment to tradition that we see today. The fierce battle against real or imagined threats to our national cuisine is a rather recent phenomenon. And the particularly inflexible attitude of the people I call "food purists" in this book took shape around the beginning of the 1960s, during Italy's frenzied industrialization.

If you read the newspapers of the time, they convey a clear sense that Italian culinary traditions were in jeopardy: according to commentators, an incredible legacy was at risk of disappearing for good.

The model they were looking to was France, which had been keenly aware of its national culinary heritage for some time and was working to protect certain skills, terroirs, and products through research and publications.

So the years that followed brought a concerted effort to record and preserve Italian foodways, but the link to thousand-year-old traditions that gourmets are always invoking was still missing from the picture. And the quest for (or rather, invention of) the ancient roots of Italian cuisine unleashed a debate that is not only still open, but has taken on gigantic proportions.

When it comes to food history, my research has concentrated on cookbooks as a primary source of information, but in order to interpret them correctly it has been necessary to explore many other fields, such as access to ingredients, production techniques, transport, food prices and every other aspect of the ancient diet.

These studies have revealed that many popular beliefs about the origin and evolution of classic Italian dishes, particularly pasta specialties, are flat-out wrong.

Writing about food in Italy is often complicated enough as it is but proposing variations on traditional recipes could be thought of as an extreme sport in this country. It's far safer to wave around a sharp sword than to serve friends a carbonara made with cream.

As a rule, in Italy, cooking is a phenomenon that flows out of the kitchen into every aspect of conviviality and social life. Food is an opportunity to strengthen family ties and friendships, the consummate binding agent. And this is true of pasta in particular, because it can be easily prepared in large amounts to share with others, at relatively little expense. If it's homemade pasta, which fortunately still exists in many parts of Italy, the whole family is often summoned to take part in the preparation of some beloved dish, especially for special occasions. It is not uncommon for everyone to gather around a big table to make the lasagna, tortellini, orecchiette, or ravioli that will become part of a festive meal. And on such occasions, the fun starts long before everyone sits down to dinner, as friends and relatives all pitch in to concoct complex dishes.

Foreigners are often surprised to learn that over dinner, Italians like to discuss what they're eating, what they've eaten, and what they plan to eat or cook in the future. Of course that's not entirely true: sometimes we just make small talk, or chat about literature, music, philosophy, history and so on.

But only if the food is mediocre.

Click here to purchase a copy of "The Discovery of Pasta" by Luca Cesari.