Abbondanza: This vodka sauce is the silkiest, easiest and creamiest weeknight dinner imaginable 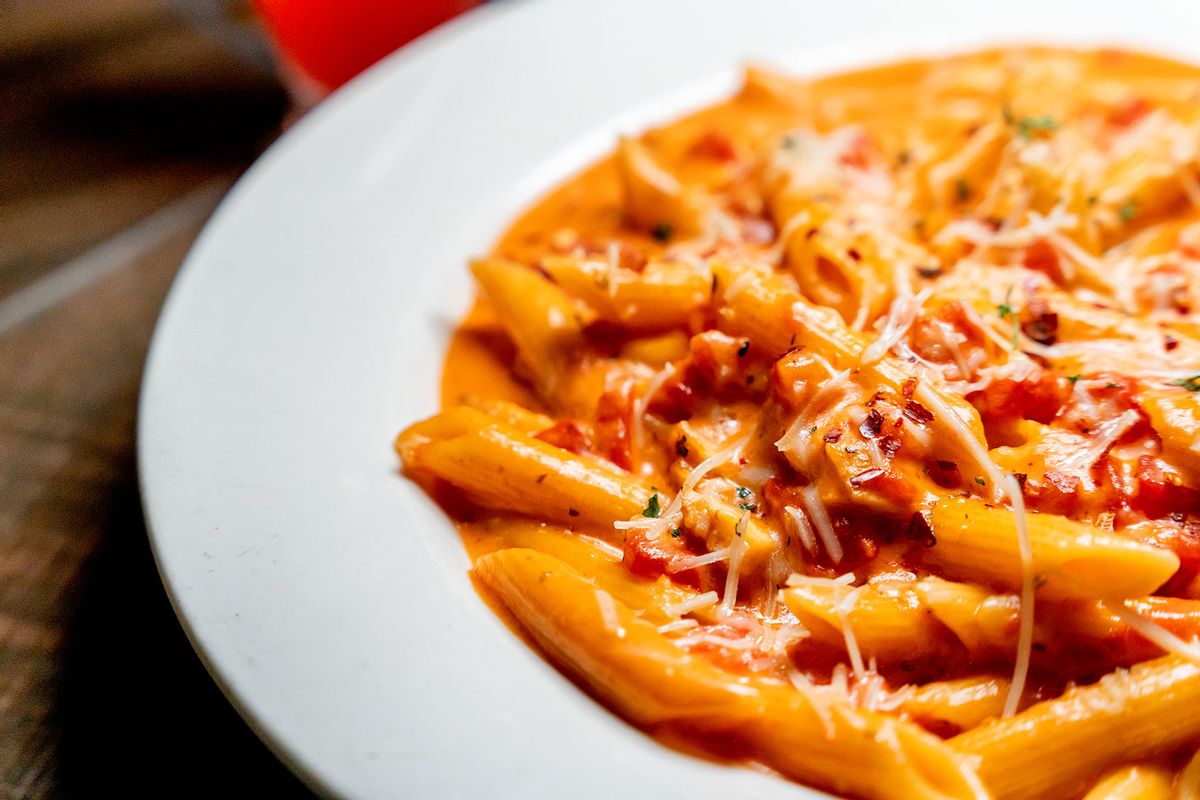 "Penne alla vodka," as many a restaurant menu, recipe, or catering spread will call it, was one of the quintessential dishes present at practically every cherished family dinner when we went out to eat at an New Jersey Italian-American restaurant (it was my brother's go-to order for years and years), as well as a primary fixture at nearly every formal occasion I've ever attended. A simple, rich dish that differentiates from standard marinara in ingredients, taste, color and even texture, vodka sauce is a dependable, reliable sauce that never goes out of style.

Why is it, then, that so many seem spooked at the idea of making it at home?

The creamiest, most decadent fettuccine Alfredo is only 15 short minutes away

A more recent Italian-American invention, Serious Eats states that vodka sauce was conceived of in the 1970s or 1980s in the New York or New Jersey area, but the real nitty-gritty of its history is blurry, full of rumors and conjecture. Paesana writes that the the original vodka sauce could be an invention of Chef Luigi Franzese of Orsini Restaurant in New York City in the 1970s, or a Columbia University graduate named James Doty in the 80s. Separately, some believe that the vodka sauce actually originated at a restaurant in Bologna, Italy called Dante, while others claim that a Roman chef actually invented the dish. The "true" story of the storied dish remains unclear.

I also spoke with Ian MacAllen, author of Red Sauce: How Italian Food Became American, who further detailed the history: via e-mail, he stated that "Luigi Franzese, the chef at Orisini's in midtown Manhattan had long claimed to be the author of a vodka-laced sauce, listed on the menu as "penne alla Russia," in 1979. However, Italian-born Armando Mei, who owned Fontana di Trevi a few blocks away, created a dish he called "penne alla vodka" as early as 1967." MacAllen also stated that vodka wasn't super common throughout Italy in the 1970s, but "in nightclubs catering to young people, especially around Bologna, pasta with vodka sauce became a popular late night snack."

Elisabeth Sherman beautifully describes the timbre of pasta with vodka sauce in a Matador Network piece, writing "I love the tang and the creaminess of the tomato sauce, captured in the humble ridged penne paste. The soft orange hue of the sauce heaped in a metal platter, flecked with chunks of tomato or cubes of pancetta came to symbolize a feeling of both comfort and celebration." Pasta vodka is also immensely customizable, so you can tweak it in a manner that satisfies the whole family, however that may be.

Partaking in Dry January? Rest assured that this dish squarely falls within the parameters; the alcohol from the vodka itself is fully cooked off, at least when properly cooked for the correct duration. Melissa Willets at POPSUGAR reports that according to Dr. Rachel Prete, a pediatrician with Orlando Health Arnold Palmer Hospital for Children, pasta alla vodka is safe for children to consume because "traditional vodka sauce uses such a small amount of alcohol that it should evaporate out during cooking."

Also, there's truthfully a pretty negligible amount typically added. Per POPSUGAR, there's about "one or two tablespoons of vodka for four to five servings of sauce."

Of course, children aren't going to get sloshed from a small bowl of pasta with vodka sauce, but obviously feel free to omit entirely, especially if you're especially committed to Dry January or sober living at large. Let's be honest, a tomato-cream sauce is pretty spectacular on its own, but the touch of vodka really does provide a sort of je ne sais quoi.

Paesana also writes that the aroma of the "cooked off" vodka actually has a lot to do with the entire experience of the dish: "As vodka's particles drift into the air, they each carry aromas along for the ride," the brand writes. "As you chew your penne or rigatoni alla vodka, the vodka particles waft flavorful aromas to the back of your mouth, creating a heightened sense of euphoric enjoyment of food."

Furthermore, the vodka can also help the sauce emulsify overall, bonding the fat, acid, vegetal and dairy components of the sauce prior to letting it flavor and enrich your favorite pasta.

I remember a former colleague once saying that pasta vodka was his undisputed, absolute favorite food — but he wouldn't even entertain the thought of cooking it himself. I tried convincing him that, actually, it was an immensely simple (and quick) undertaking, but he wouldn't hear of it.

I hope that this recipe can convince you otherwise.

UPDATE: An earlier version of this story didn't include information about chef Armando Mei's original iteration of penne alla vodka. The story has since been updated with additional information.

1 pound rigatoni, penne, ziti, or the pasta of your choosing*

2 to 3 tablespoons vodka (or non-alcoholic vodka), or omit

2 to 3 tablespoons concentrated tomato paste (I like the tubes)

Rind from a block of Parmigiano Reggiano, optional

A touch of freshly grated nutmeg

Fresh basil leaves, chopped into a chiffonade, for garnish

-Some opt for only tomato paste while others opt for only crushed or pureed tomatoes, but I like the texture and flavor that both item brings to this party.

-Protein additions are super popular for vodka sauce. This can look like pancetta cooked with the shallot and garlic, imbuing the final dish with its porky essence, or a crisped prosciutto or guanciale added as a final garnish to add some textural differentiation to the tender pasta and rich, smooth sauce.

-You can always add vegetables here, too. Peas are especially popular. Just toss some in within the final few moments of cooking.

-Obviously, many are faithful to "penne alla vodka," but I prefer rigatoni with this sauce. Do as you see fit, though; this would also be stellar over gnocchi, stuffed pastas or even spaghetti.