"One more round for my friends": Notes on becoming a "regular" 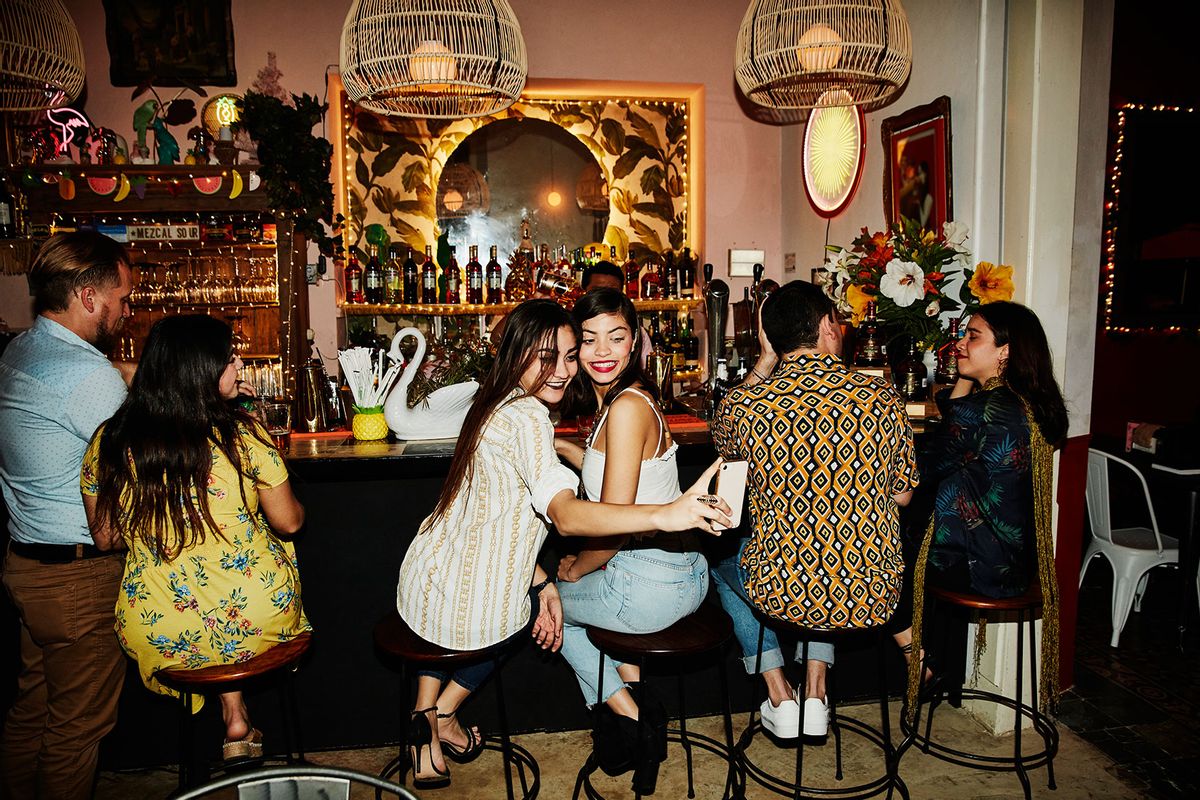 José is still getting used to his prosthetic leg, but that doesn't stop him from salsa dancing. When the music hits, he pushes himself back from the table and begins to swivel his hips. He steps forward with his left foot, then shifts his weight to the other, before finally slapping his right thigh. "That's all titanium, baby!" he gleefully shouts at no one in particular.

After about two minutes of pivoting, turning and checking with an imaginary partner, he sits down and wipes the condensation that's formed on his Modelo Especial. After taking a long swig, followed by an even longer draw from a freshly-lit joint, he looks up at my boyfriend, Stephen, and me. "So, where were we?"

We're sitting on the patio at a little Puerto Rican bar in Chicago's Humboldt Park. We were in the neighborhood and initially stopped for jibaritos — a city-favorite sandwich made by stuffing grilled meat, lettuce, raw white onion, mayonnaise and American cheese between two deep-fried green plantains — after seeing them advertised on the sidewalk menu board. I'd never been to this bar, but I liked it immediately.

The healing power of the peach

It was cool and dark and loud. People practically shouted over the string of Frankie Ruiz songs on the stereo ("Tú Con Él," "Bailando" and "Señora"), which in turn blared over the boxy television set tuned into the local news. The ornate blonde oak bar sat on a concrete slab floor, which led to the roll-up garage door at the front of the building. Apparently, the door basically stays rolled up, regardless of temperature, until the first snow. As such, people pool in and out, congregating especially on the line between "inside" and "outside."

Well, except for José.

It became apparent very quickly that José was a "regular" — the type of person who isn't just in a place, but a part of it. He migrates from table to table, greeting newcomers and fellow regulars alike. He playfully punches a short man wearing a fedora in the arm: "Hey, hey, broki! Staying out of trouble?" He asks after the waitress' son, before moving to a table with three curly-haired women, all of whom he kisses on the cheek. His lips linger on one woman's cheek just a little longer than the rest ("My old girlfriend, man," he later confides. "But I needed my freedom."), which causes all the women to erupt in tittering laughter.

They shoo him away, and he continues to orbit the bar until his eyes lock on my half-empty mojito. He hollers at the waitress, "Bring my friends another round!" He looks at Stephen, "Mind if I sit?" When we invite him to join us, he shouts across the bar again: "And three shots of whatever you like best!"

Something I realized long ago is that there's nothing like a microphone — turned on or off — to get a person to talk about themselves . . .

Stephen and I had been out recording interviews for a project, and our gear was tucked into an empty patio chair. When we move it to make room for José, he spots the recorder. Something I realized long ago is that there's nothing like a microphone — turned on or off — to get a person to talk about themselves, which is what José begins to do.

He tells us about coming to the contiguous United States and about how the neighborhood has changed since he did. He talks about his new Polish neighbors, and how they can't speak the same language but have bonded over pastries. He talks about dominoes and "The House on Mango Street" and Saul Bellow. Occasionally, he punctuates his own thoughts with questions about us. Do you believe in God? Do you wish your Spanish was better? You're a couple, yeah?

"I could tell. Beautiful chemistry," he responds. "Beautiful."

As it gets darker, the patio gets smokier. Through the haze, José spots another friend taking a cigarette break and excuses himself. While he's gone, the short man in the fedora — whose name is Luis, though he says everyone here just calls him "The Colombian" — takes José's seat. It turns out that he's a regular, too.

"I'm just quieter about it," he says with a laugh, gesturing to José.

"When did you know you were a regular?" I ask.

Luis ponders for a moment, then looks towards the front door: "That's a good question. It's like one day, people here didn't know me. Then one day, they did. What's that show? 'Cheers?' I walked in and most everybody knew my name."

I remember occasionally watching "Cheers" as a pre-teen and thinking that the concept of becoming a regular was so incredibly grown-up. In practice, however, I've always preferred bars that feel a little more liminal — airport bars, hotel bars, the places you stop at when you're on the way to somewhere else. I'd been a regular at other places, like coffee shops and one particular strip-mall Vietnamese joint, but I had never given much thought to it.

During the pandemic, though, I began to experience a kind of aching nostalgia for certain types of restaurants. I wanted to slide into a pleather diner booth, peel a laminated menu off the freshly-wiped table and order a mug of slightly burnt coffee, which the waitress brings out alongside ice water in one of those pebbled red Coca-Cola tumblers. I wanted to eat bucatini all'amatriciana at an old-school red sauce joint where they probably still bring the Chianti out in a little wicker basket.

I wanted to find myself at a bar —one that is cool and dark and a little loud — where the boundaries between fellow customer and friend had blurred.

And I wanted to find myself at a bar —one that is cool and dark and a little loud — where the boundaries between fellow customer and friend had blurred. Part of this desire was underlined by the fact that we had moved cities mid-pandemic, but an even bigger part of it was that natural desire for human connection after months of Zoom meetings and virtual cocktail hours. Tonight was a taste of that.

By this point, José had joined us back at the table. Luis and he were ribbing each other about their respective love lives — or lack thereof. Before anyone said anything that was a little too biting, someone cranked up the stereo. The bass' pulsating thud, thud, thud was loud enough to rattle the melting ice cubes in my glass and draw José back out of his seat again.

"I'm sorry, but I've got to dance," he says, eying the curly-haired woman he'd kissed earlier, before waving to the waitress. "But let's get one more round for my friends!"

essays from this author