Election during an apocalypse

Willa Paskin on the year of homeland insecurity 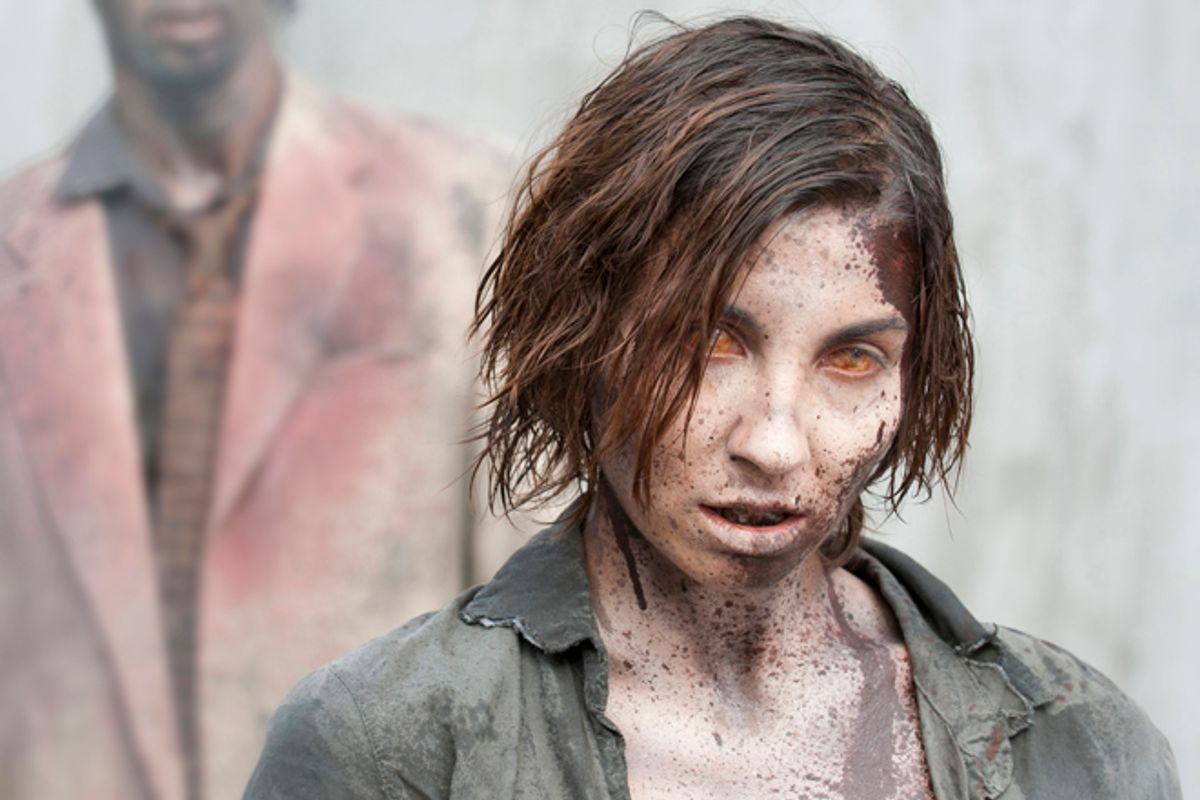 As 2012 winds down and 2013 waves, ever closer, from the far side of New Year's Eve, it's the right time to look back on the year in television. From "Zou Bisou Bisou" to Honey Boo Boo, the Lena Dunham wars to the great "Homeland" plausibility debate, from Louis C.K. to the Dowager Countess, and all the zombies, meth lords and Karl Roves in between, it has been quite a year for television. One that, amped up by hyper-engaged writers, recappers, commenters, readers and the great tweeting masses, has shown that watching, thinking, talking and writing about television are exceptionally interactive, vibrant, impassioned and nitpicky pursuits. If these activities are practiced by couch potatoes, at least they are couch potatoes with racing minds.

Here at Salon we decided we would like to continue this vital conversation and channel it into a referendum on the year in TV. We invited 14 TV critics to share with us their favorite shows, moments, lines and performances from the past year and we've assembled their answers for the Blue Glow Awards. Each of the critics who participated submitted their top five shows of the year, along with answers to more specific questions about the best scene, performance and jokes and so on. The answers reflected consensus, personal taste and a lot of personal taste amid the consensus: Entertainment Weekly's Ken Tucker's favorite scene of the year came in the third episode of "Homeland," when Brody murdered the tailor in the woods, a scene I know drove both me and the AV Club's Emily VanDerWerff  — who both put "Homeland" in our top five — batty.

First, a look at the consensus: The top three series — "Homeland," "Mad Men" and "Breaking Bad" — are the three most high-profile dramas on television, the series battling it out for acclaim, Emmys and status as the watercooler show of the moment. At least two of these three shows appeared in the top five of every critic we polled. "Homeland," the newest and buzziest, came in at No. 1 despite some of the more, ahem, problematic aspects of its second season, which even its advocates couldn't ignore. TV Guide's Matt Roush, who selected "Homeland" as the best show of the year, did so "for the thrills, for Carrie and Brody, and because suspension of disbelief is my favorite underrated pastime." As Van Der Werff put it, "It's an embarrassment of riches, even when it's embarrassing."

Time will tell, but I suspect that "Homeland" will never really compete with "Breaking Bad" and "Mad Men" (and "The Wire" and 'The Sopranos") for the "Best TV Drama of All Time" title (whatever that title's worth), but in the short term there is no discounting fun, and "Homeland" provided that in far bigger heaps than it did logic. Claire Danes' performance, as well as Mandy Patinkin's and Damian Lewis', were name-checked as some of the best of the year, and five critics thought the show had the best scene of the year, the most of any series, with three calling out the wondrous pas de deux that was Carrie's interrogation of Brody in particular.

In addition to all the acting and the action, "Homeland" does feel particularly relevant to the way we live now. Writing about why "Homeland" is the show that most evoked life in 2012, ThinkProgress's Alyssa Rosenberg said, "The Showtime drama about a CIA agent and the traitorous soldier she loves may have gone a little nuts down the home stretch. But then, so is the War on Terror, and the places drone strikes and the Sept. 11 attacks have taken us. In an election year full of patriotism-offs, a show that reminds us that everything about Washington, D.C., from coverups of the murders of children abroad, to coverups on behalf of politically connected children at home, is more than a little crazy is a tonic, even if one that comes with side effects." Or, as the L.A. Times' Meredith Blake put it, "When Barack and Bill are binge-watching your show, clearly you're on to something."

As for the runners-up, "Mad Men" and "Breaking Bad," the fact that neither overtook "Homeland" this year may be in part because we've become acclimated to their continued, impressive greatness. (Imagine either of these series' second seasons facing off against "Homeland's.") As Grantland's Andy Greenwald says, "'Mad Men's' not the newest of cable's sexy prestige dramas, it's no longer the flashiest and certainly it has the fewest disembowelments per season … But in its fifth season 'Mad Men' remains the best thing on television: smarter, deeper, sadder, weirder than any of its competitors." Alan Sepinwall wrote, "Watching the show every week felt, to borrow an old line from Ken Cosgrove, like looking into something very deep; you could fall in." Certainly, many moments from "Mad Men" — and especially Megan's performance of "Zou Bisou Bisou" — stuck in critics' minds as the year's most memorable.

Though this was the season that "Breaking Bad" — which the Hollywood Reporter's Tim Goodman praised by saying "No series has ever snatched a character away from an audience that loved him and then made that character so irredeemable. None" — murdered a young boy, it came up on three ballots as having the funniest moment of the year, only one for the unforgettable, "Yeah, bitch — MAGNETS!"

On to the real comedies on this list: Almost all the critics polled put a comedy in their top three, but when the numbers got crunched, the old-fashioned hierarchy — the same one that makes it so hard for comedies to get nominated in the best picture category at the Oscars —  occurred: dramas > comedies > genre fictions. Following "Homeland," "Mad Men" and "Breaking Bad" in the fourth, fifth and sixth slots is a murderer's row of groundbreaking comedies, "Girls," "Louie" and "Parks and Recreation," followed by the two genre shows (but not just genre shows) "The Walking Dead" and "Game of Thrones."

"Girls" and "Louie" — especially "Louie" — are funny shows that are often not funny at all. What distinguishes them from many dramas is more their 30-minute run-time and openness to laughter than a lighthearted outlook or subject matter. Matt Roush's description of Louie's "rich humanity under the cloud of melancholy" encapsulates that show's mood perfectly, and the heartbreaking Parker Posey arc was mentioned three times.

"Girls'" accomplishments, as Heather Havrilesky explains, are not contained to the world of sitcoms: "Taking an audacious, raunchy, absurd comedy about young women and making it not only relatable but oddly moving? Sounds impossible, but somehow 'Girls' pulled it off, thereby upstaging every other female-centric show to air in the last decade." Some of the specific moments from "Girls" that were mentioned — Hannah and Marnie dancing late at night to Robyn, a conversation between Shosh and Ray, and, throwing in a personal favorite, Marnie's gonzo emergency masturbation session — are all feeling-, not so much laugh-inducing. (Though, as Havrilesky points out, "No, you're the wound" sure is.)

As for "Game of Thrones" and the resurgent, much-improved "Walking Dead," here are two convincing explanations for why they're emblematic of the past year. HuffPo's Mo Ryan writes of "Games," "The show was all about the struggle for power, weird alliances, embarrassing decisions and desperate people wracked by conflicting loyalties — sort of a mirror of the 2012 election, if you ask me." Havrilesky makes a similar case for "Walking Dead": "It's hard not to encounter the around-the-clock slaughtering of repugnant, brain-dead beasts as an accurate metaphor for navigating an election year."

And lest we forget it was an election year, Stephen Colbert and Jon Stewart (and Rachel Maddow and Nate Silver and Karl Rove and Megyn Kelly) all were mentioned multiple times as the quintessential programs of 2012. (For my money, there was no better TV moment than Rove's election night temper tantrum.) In the words of Alan Sepinwall, "At the end of every night, after I've taken notes on all of the scripted shows I keep up with, made sure that bills and other household issues are taken care of and the kids are still sleeping safely, I sit down with my wife and we watch 'The Daily Show.'" And for a half-hour (or, at least, until the interview begins), Jon Stewart takes all the things happening in the world that fill me with rage or despair and instead gives me license to laugh at them." Ken Tucker spoke similarly about Colbert: "Most weeknights, I entered the world of character-Colbert to make alternative sense of the election taking shape around me, and came away constantly impressed at Colbert's daring attempt to make sense of life in 2012, how hostile and selfish and brave and crazy life was this year, and how decent a man real-Colbert seems to be."

One genre that didn't appear on many ballots was reality TV — but when it did appear, it counted. Writing about the series that most evoked life in 2012, Time's James Poniewozik said, "There may be no intentional connection, but it's striking how many cable reality shows now are either about people going to extreme lengths to afford stuff ('Extreme Couponing') or being smothered under all the stuff they've acquired ('Hoarders'). Somewhere in there is the key to the entire American economy." The Tampa Bay Times' Eric Deggans picked "Here Comes Honey Boo Boo" because, "It's exploitative, demeaning, filled with stereotypes and literally encouraging a child to act out in ways she is likely to regret later in life. It feels like a troubling allegory for too much in television and life; guilty, damaging pleasures we pretend have higher meaning." BuzzFeed's Kate Aurthur said, "I always learn the most about contemporary life – which, to me, is currently all about the economy – from 'The Real Housewives.' All of the different versions of the franchise. But special thanks to Teresa Giudice of New Jersey for demonstrating the denial a single human can live with!"

But for all the opinions we share, some of the most interesting were the ones were the oddballs: Emily VanDerWerff's recommendation of the web series "Rev." Matt Roush's plea for "The Middle" as TV show of the year. Alyssa Rosenberg's nod to acting on "The LA Complex." Heather Havrilesky's appreciation of a moment on "Boardwalk Empire," and the "Luck" scene Alan Sepinwall cannot stop watching. Joyce Millman's shout-out to the World Series. The double defense of the acting skills of "Parenthood's" Monica Potter. And — one thing I personally could not be more excited about — the fact that the quirky, strange "Bunheads" snuck into the top 10. TV, as ever, was vast this year: Dive in to the ballots and have a look.