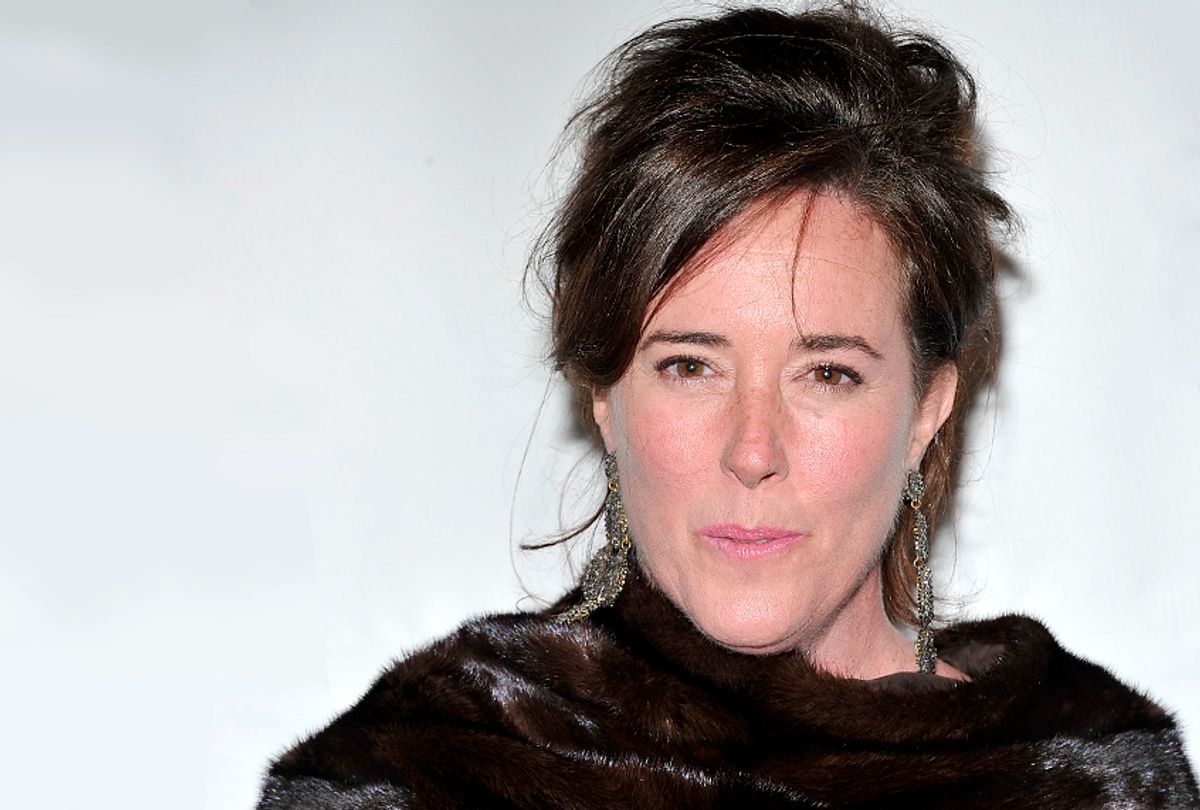 It didn't take long after the initial news of designer Kate Spade's apparent suicide to break for the inevitable attention scolding began. On social media Tuesday, armchair pundits immediately commenced asking why this death, and not the volcano in Guatemala, was trending. Why this, when immigrant children are separated from their parents, when the death toll in Puerto Rico continues to rise? In my own circle, a San Francisco friend noted that she'd already been chided for talking about it on the same day as the California primary.

Interesting fact: People can care about more than one thing at a time. They can even care about things when you don't see them caring about them!

The ubiquity of public reactions to news events — both from the major media and the guy with six Twitter followers — makes for a certain degree of competitiveness around collective thought. That "trending" column, that "most read" list, they tell you in blunt and sometimes dismaying frankness where our mental and emotional priorities seem to lie. They don't tell the whole story, though.

There are serious ethical discussions to be had about the way that news stories are covered, and what gets attention and what do not. The still stubbornly homogenous staffing of media companies is blatantly reflected in the amount of time and coverage certain issues get. Stories about poor people and marginalized communities are under reported, and that's a massive journalistic failure.

But are there are good reasons to not misdirect frustration about important issues into hostility at human beings. For starters, shaming people is not an effective way to win anybody over. (I went to Catholic school; trust me.) When Senator Chris Murphy tweeted out late last month the edict to "Stay focused. Health care premiums, gas prices skyrocketing. Immigrant kids ripped away from their parents. The federal government morphing into a kleptocracy. Wanna talk about Roseanne today? Fine. But tomorrow, let’s get back to work," he no doubt had a point about those topics.

Immigrant kids ripped away from their parents.

The federal government morphing into a kleptocracy.

Wanna talk about Rosanne today? Fine. But tomorrow, let’s get back to work.

A middle-aged, straight, white man decreeing exactly how much attention the rest of us should pay to a story that had everything to do with racism, however, reeked of privilege. What if "the work" is also respect for people of color, Senator? It's a common political and pundit ploy, and an exasperating one. It says, the things that are important to me are the things that are important. I, smart and influential person, will tell you what constitutes something real and what is a "distraction."

Popular culture is, for many of us, a way in to complex conversations about race, about gender, about class, about mental health. It's arrogant to be dismissive about them. If you think ten years of Kardashians has just been about Kim's eyelashes and not also about race, sex and gender identity, bitch please. If you think "Roseanne," the Philadelphia Eagles and Kate Spade are just about TV, sports and fashion, you need to try a little harder.

And here's something else: Feeling connected to someone's comedy or music or art is a good thing. It's a human thing. I remember when a friend callously remarked, when Amy Winehouse died the day after the Norway school massacre, that more attention was being paid to "a dead junkie" than a group of innocent children. The association was clear in his mind — any grief over this one woman was compassion that could be directly diverted to another cause. Sorry, it doesn't work that way.

Now, the death of Kate Spade — and the peevishness from certain quarters that it has received the attention it has — likewise speaks spectacularly to the enviable cluelessness of those whose mental health issues are not acute. In an email to the Kansas City Star Tuesday, a woman identified as Spade's sister said that she'd worked with her about getting into a treatment center for her issues, but that "In the end, the 'image' of her brand (happy-go-lucky Kate Spade) was more important for her to keep up. She was definitely worried about what people would say if they found out."

If this account is true, it certainly jibes with the shame and stigma that people with mental health problems often face. It's a reminder that we have a commander-in-chief who has bragged about never seeing a psychiatrist and whose budget slashes funding for mental health services by as much as half a billion dollars. So if the loss of a beloved figure is a means for somebody to talk about depression or suicide or addiction or grief, maybe let them have that, OK? Because the narrative of forced heroism imposed on people who face disease so sharply contrasts that of people trying to just stay alive through mental health issues, it's ridiculous. Trust me, I know — I've been called a warrior for having cancer and weak for having PTSD. What I've learned is that stomping in to minimize people's legitimate suffering because other people in the world suffer differently is callous, and it doesn't alleviate anybody's problems anywhere.

The eagerness to brush off stories with a mental health angle as less legitimate than those about earthquakes or politics also plays out in other ways. If you can look around at your social media feed or the people you're sitting in a bar with and sincerely observe that you don't think people are sufficiently freaked out or anxious for your liking, congratulations. You must be a pretty stable individual, surrounded by others with similar luxury. But when I see a tweet, especially from a journalist, that we're not scared enough of whatever is going on in the news today, I think, gee, that's funny, those of us with depression and anxiety and PTSD feel like we're bringing our A game here. Guess we'll have to tell our therapists we're underperforming. All I know is that my online life got exponentially better when I muted the accounts of some very popular media Cassandras.

The arm waving, "Look over here and be scared!" message presumes that the people receiving it exist in a state of placid obliviousness. Wake up, sheeple, it says. It scolds that if you're tweeting during "The Bachelorette," you can't possibly also care about reproductive justice. If you're posting a smiling selfie, you're being selfish about prison reform. It creates a vicious paradox. If you don't constantly prove your fears and anxieties, you're not paying attention. But if you do talk about them, you're just whining. Be afraid, all the time, but don't have an actual diagnosed disorder about it! Keep your eyeballs pried open to every single horror in the world, but never cop to genuine distress or sadness!

There is more than enough sad, scary stuff to go around. Guilt tripping doesn't make people care about the things you care about; it just makes them feel bad about the things they care about. I promise that we can look at our most serious social issues through the lens of a celebrity meltdown, we can cry over someone we never met and we can protest and vote too. Any time we can console each other, support each other, or, quite usefully, entertain each other, that is not wasted. And we cultivate the empathy we all so mightily need right now by sharing our experiences, not shaming them.

If you or someone you know needs help, please call the National Suicide Prevention Lifeline at 1-800-273-TALK (8255) or contact the Crisis Text Line by texting TALK to 741741.

The legacy of suicide

We need to bust the taboos of mental health