Smart Watch: What's on TV in August, besides everything we've missed?

Time to catch up on shows that slipped by us like "Bliss," "Ryan Hansen Solves Crimes on Television*" and "Casual" 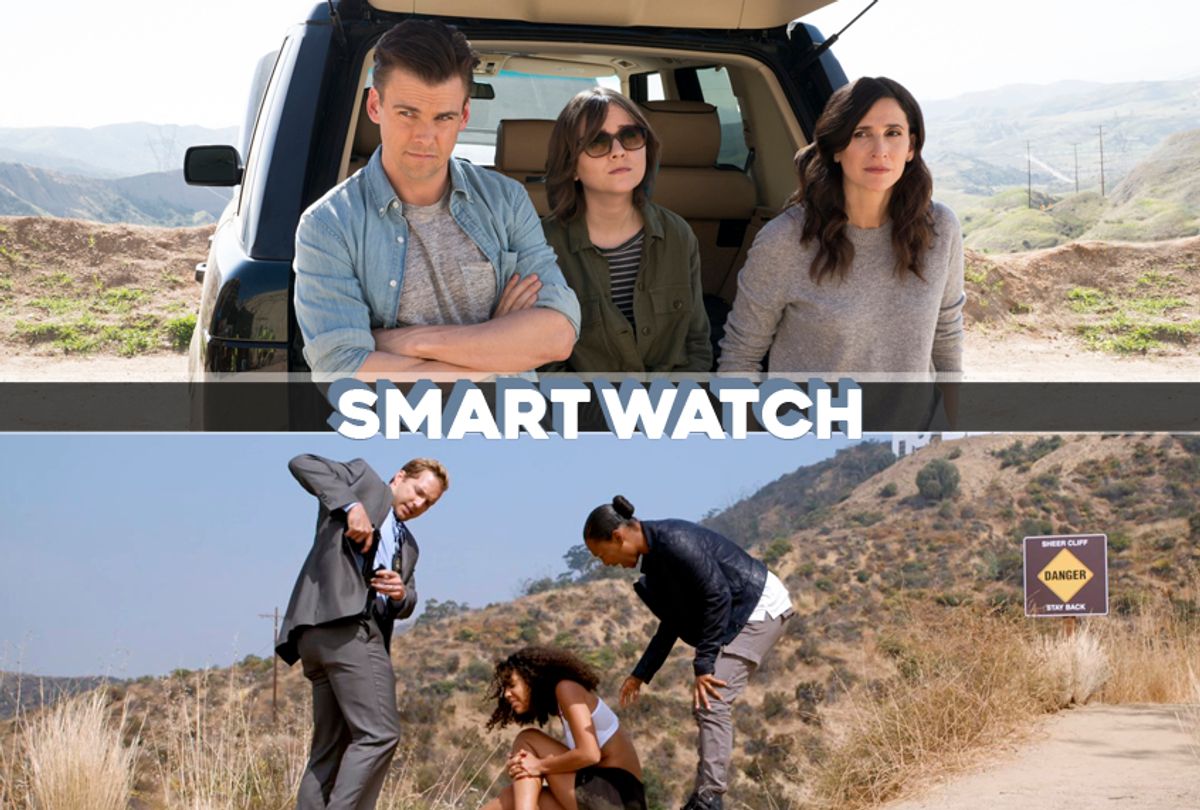 We have reached the summer dead zone, premiere-wise. And the surest sign that we’ve crept up to the end of this desert is that the latest and last (thank the Maker) “Sharknado” hits Syfy Sunday at 8 p.m.

Mentioning this is not intended to be a recommendation or a warning. Instead, think of it as a sign like, “Last Gas Station For About Two Weeks.” Not saying you should pull off and refuel there – the restroom alone received terrible online reviews!

Perhaps we should look at this impending gap as an opportunity to check your fluid levels and service requirements. Are there any shows you’ve been meaning to get to that you may have let pass you by? For the average TV viewer the answer is almost always yes these days; think of all episodes you’ve allowed to stack up on your DVR in favor of staying current with conversations about the latest Netflix series.

There’s a new one coming up on Friday, in fact, called “The Innocents.” It stars Guy Pearce. It’s about teenage runaways. Beyond that the press is not allowed to go into detail until Monday, so as to whether it’s a stream cutting the dry gulch between now and September, mum’s the word.

At any rate, there’s enough new summertime content to keep us busy in the form of series that have just gotten started, like HBO's “Insecure” or summer sleepers that are nearly done, including the penultimate episodes of Showtime’s “Who Is America?” and HBO’s “Sharp Objects,” both of which air Sunday and are better options than “The Last Sharknado: It’s About Time.”

In case you’re jonesing for something new or new to you, here are list of four series that may have slipped by you while you were juggling approximately 100 of the eleven billion shows currently airing or streaming right now, listed in order from "about to debut" to “good lord, has it been a year already?”

I recommend with a note of hesitation unrelated to its quality. Rather, it’s a matter of limited availability. “Mr. Mercedes,” another thriller based on the work of Stephen King, is an energetic cable drama which, alas, is an AT&T, and therefore exclusive to DirecTV, DirecTV Now, and AT&T U-verse app users. If your response to this is, “I don't have that service; what good is this to me?” the answer is, strike up a friendship with a subscriber.

In this new season Bill is easing into semi-retirement by becoming a private investigator, although he’s still keeping an eye on Brady, currently being kept alive by machines in a hospital. This is a Stephen King story, so being in a vegetative state might not be enough to stop a killer.

Where season 1 of “Mr. Mercedes” was electrified by shivering creepiness, these new episodes are weird in an entirely new way that merges classic Frankenstein’s monster tropes with some “Black Mirror”-style oddity.

Why on Earth would anybody intentionally bother with bigamy? Comedian David Cross answers this question, after a fashion, in this series he created, directed and writes (save for the third episode). Actually his main character Andrew Marsden (Stephen Mangan of “Episodes”) directly responds to this thought in the first episode, as soon as it’s revealed that he bounces between two wives, two kids and households, each ignorant of the other’s existence.

“I didn’t plan for this to happen,” he says. “It just sort of…happened. And then it kept on happening.”

We soon discover that Andrew is an organized deceiver who leverages his job as a famous albeit anonymous travel writer to alternate weeks between his wives Denise (Jo Hartley) and Kim (Heather Graham). Somehow he’s fooled himself into thinking he can retain control of an untenable situation in the midst of a chaotic universe. Sure enough, despite his expert juggling act his two family spheres are constantly on the verge of colliding and shattering.

Mangan, familiar to “Episodes” viewers, wields his charms in a way that prevents what could be an entirely unlikable character into collapsing into a jerk or a clown, helped in no small way by the disparate personalities Graham and Hartley create in their characters. Viewing them through the harried life of one relatively unremarkable guy actually places these women in a position to develop and grow more than Mangan’s two-timing husband who is, in many ways, locked in a state of arrested development by his inability to choose one mate and one path.

And here, Cross channels less camp than discomfort, particularly when in comes to a number of close calls that force him to take outrageous actions. As the plot spirals beyond Andrew’s grasp, “Bliss” evolves into something other than an exercise in cringing. Above all it proves that keeping a side family is way too much work which, in some respects, makes this show a public service.

The fourth and final season of his underrated comedy dropped a couple weeks ago to less fanfare than Hulu’s newest series “Castle Rock.” This, “The Handmaid’s Tale” and other dramas are examples of where Hulu is heading as opposed to this remnant of its first steps into original content. But that doesn’t make this comedic gem, with episodes directed by the likes of Lynn Shelton, Carrie Brownstein and executive producer Jason Reitman, less worthy of celebrating.

Besides, unlike those dramas, this intimate comedy about a divorced woman, Valerie (Michaela Watkins), her commitment averse brother Alex (Tommy Dewey) and Valerie’s daughter Laura (Tara Lynne Barr) simply oozes soulful sweetness, making it the perfect and relaxing end-of-summer binge. All of them have made mistakes with each other as well as separately, evolving painfully and believably as prescribed by series creator Zander Lehmann.

And while its final eight episodes fly by too quickly, these last chapters of “Casual” provide a sublime farewell kiss to fans and these characters. The series began with these three taking shelter in each other when fate knocked them into a storm; it feels right and proper to celebrate all that leads up to them, and us, moving on to whatever is next.

What great about streaming content is that regardless of how much time has passed, it somehow manages to feel up to date. Anyway, that’s one excuse for finally calling attention to a series that debuted a year ago.

In our defense, did you consider YouTube Premium, former known as YouTube Red, a destination for great series before “Cobra Kai” debuted last spring? Neither did we, and the executive producers of “Ryan Hansen” know it. The recently circulated press release confirming the show’s season 2 pick-up is full of self-loathing, shame and envy for the “Karate Kid” sequel which with it shares a platform.

Created and executive produced by an A-list Hollywood director who would prefer to remain anonymous in order to protect his reputation, season two of ‘Ryan Hansen Solves Crimes on Television*’ will feature some of the same ‘hilarious’ hijinks that caused almost no one to watch season one.

But Ralph Macchio’s and William Zabka’s cultural resurgence provides coattails upon which “Ryan Hansen” can happily ride, bringing more attention to its lovably goofy titular star, who has graced such cult hits as “Party Down” and “Veronica Mars.”

Here, Hansen plays a himbo cavorting through Hollywood, convinced that a long career as a day player gives him the chops to unmask a serial killer. Helpfully Hansen’s life mimics the absurdity of television; he’s partnered with a cop (Samira Wiley) who is too skilled to be putting up with his idiocy, and comes home every day to a bucolic sitcom wife and kids. The parade of celebrity cameos in “Ryan Hansen,” including Jon Cryer, only adds to entertainment value.

A debut date for Season 2 hasn’t been announced, but we’re guessing you have a few months to catch up. By then the regular season will be in full swing with many more distractions vying for your attention. The first season goes down quickly and smoothly, so you might as well jump into that catch-up binge. It’s going to be a while until the next fresh catch.