Celebrities like Judd Apatow and Jim Carrey said no thanks to sharing a bill with Steve Bannon. Good for them 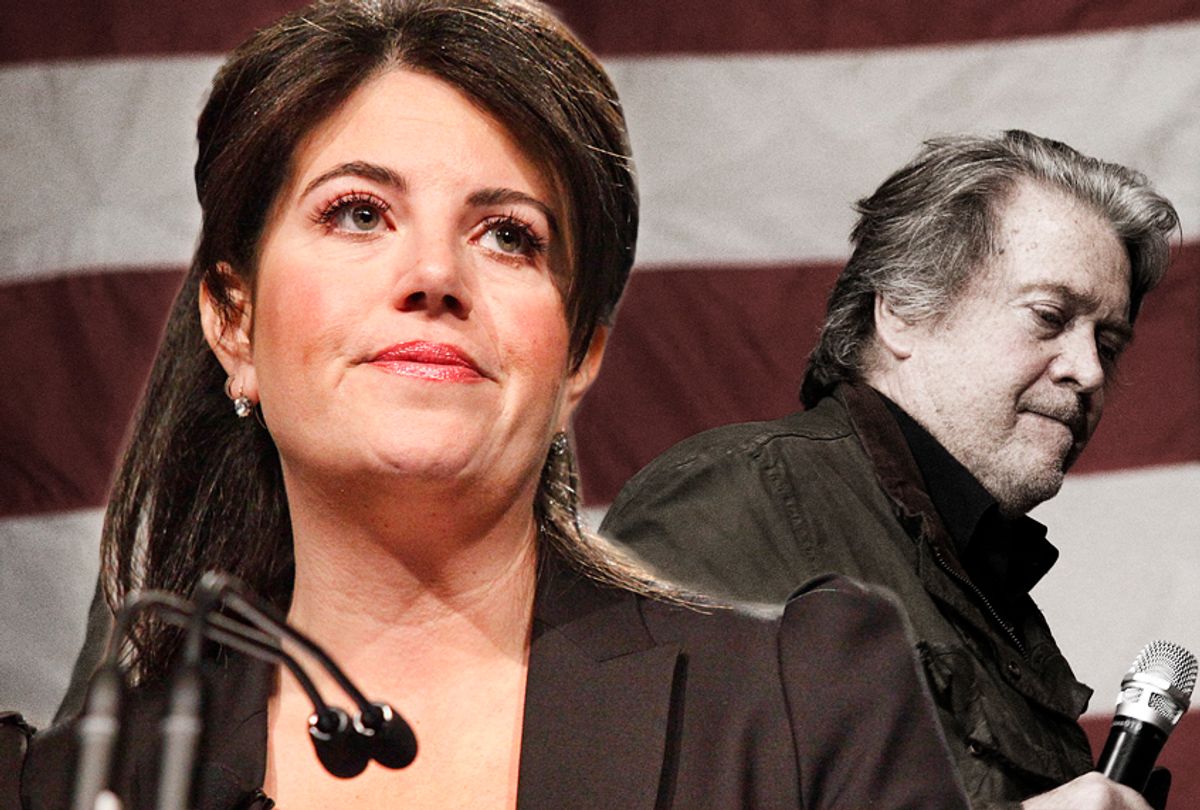 There is perhaps no more apt metaphor for the current divisive state of American discourse right now than one population burning their sneakers — and another putting them to good use. In the same holiday weekend that some Nike owners were setting fire to their shoes to protest Colin Kaepernick's inclusion in the company's "Just Do It" anniversary campaign, two other incidents showed the impact of voting with your feet.

New Yorker editor David Remnick, whose Pulitzer-winning publication could certainly not be mistaken for a Daily Caller wannabe, explained to the Times that "I have every intention of asking him difficult questions and engaging in a serious and even combative conversation. The audience itself, by its presence, puts a certain pressure on a conversation that an interview alone doesn’t do. You can’t jump on and off the record."

Among those expressing support for Bannon's inclusion was Malcom Gladwell, who on Tuesday said on Twitter, "Huh. Call me old-fashioned. But I would have thought that the point of a festival of ideas was to expose the audience to ideas. If you only invite your friends over, it’s called a dinner party…. Joe McCarthy was done in when he was confronted by someone with intelligence and guts, before a live audience. Sometimes a platform is actually a gallows." Another user, however, pointed out that "Joe McCarthy wasn't invited to speak at those hearings, he convened them."

But beyond Gladwell's illogical metaphors, there were important questions raised about who gets to decide that having conversations with people like Steve Bannon is a productive thought exercise. You might have noticed that those most directly affected and hurt by the rhetoric of the former Breitbart executive and ex-White House Chief Strategist tend not to be booking him for speaking gigs. As Roxane Gay explained, "This decision demonstrates how the intellectual class doesn't truly understand racism or xenophobia. They treat it like an intellectual project, where perhaps if we ask 'hard questions' and bandy about 'controversial' ideas, good work is being done.... They treat noxious ideologies as if they deserve a platform, as if a galling willingness to entertain bullshit is some bold demonstration of true intellectualism." AMEN.

You've got to be coming from a hell of a place of privilege — and outrageous ego — to entertain for a second the idea that sure, just let a troll have his say and then we'll shine our disinfecting sunlight on him and that'll make a difference. Or, and hear me out, we could instead give that time and platform and money to people who aren't actively terrible? You can have an exchange of ideas without putting crap on the bill. You can debate opponents without telling a Steve Bannon, as David Remnick did, "We would be honored to have you." Show of hands, please: Who would be "honored" to welcome someone who oversaw headlines calling Bill Kristol a "renegade Jew" and declaring that birth control "makes women unattractive and crazy"? Who'd be down to converse with the man who, at a French National Front Party event last March, told the crowd, "Let them call you racists; let them call you xenophobes; let them call you nativists; wear it as a badge of honor"?

As Monday unfolded, it became increasingly evident and public that having a guy like Bannon at the New Yorker fest wasn't such a hot idea after all. Like dominos, other high profile names announced that they were dropping out if the Bannon event went forward. Tough to sell those $80 a pop tickets to see Jimmy Fallon or Jim Carrey when they, along with stars like Bo Burnham and Jack Antonoff, are suddenly saying they will not appear. In the span of a single half hour, several of the most anticipated guests announced they would bail. "I will not take part in an event that normalizes hate," tweeted director and producer Judd Apatow, while comedian and "Saturday Night Live" alum John Mulaney said, "I'm out… Hard pass on this amateur-night sonofabitch." And soon after that, David Remnick announced that Bannon's invitation had been withdrawn.

In a lengthy, rather defensive statement, Remnick continued to argue for the value of talking to difficult people, not to change their minds but to "add something to our understanding" of who they are. Yet he acknowledged that a festival is a unique beast, one in which guests are paid an honorarium and their travel and lodging are compensated. It was a conclusion he and the festival organizers could have come to two months ago. You know you can have meaningful conversations around difficult people and issues without giving them money or "honor," right? But it took the force of other people walking away to make an impression.

There must be something going around. Elsewhere Monday, activist and writer Monica Lewinsky cut short an interview in Jerusalem after Hadashot News anchor Yonit Levi asked her a question about whether Bill Clinton should privately apologize to her. "I'm so sorry, I'm not going to be able to do this," Lewinsky replied, before getting up and walking out. (Hadashot News countered that the question was "legitimate and respectful.")

In a statement she posted on Twitter, Lewinsky said, "There were clear parameters about what we would be discussing and what we would not. In fact, the exact question the interviewer asked first, she had put to me when we met the day prior. I said that was off limits. When she asked me it on stage, with blatant disregard for our agreement, it became clear to me I had been misled." And here's the kicker: "I left because it is more important than ever for women to stand up for themselves and not allow others to control their narrative." NBC soon excitedly reported that Lewinsky had "bolted" and USA Today and the Daily Mail reported she'd "stormed offstage."

Maybe to people who aren't used to the sight of someone giving a polite "peace out" to a situation that feels morally untenable, it looks like a big deal. We are taught — especially we women are — to be quiet and pleasant and not make waves and basically swallow our feelings and better instincts. That's exactly what dirtbags count on. They count on making you, nice person, being uncomfortable with any form of confrontation and dissent. Like Ariana Grande, who recently had to stand tensely at a funeral while a bishop pulled her near and let his hands wander toward her breasts. That's how it goes, so often. And as Lewinsky explains, it's really important right now to show the dirtbags this is not OK or normal.

Having recently deleted all my social media accounts and walked away from the Catholic church literally in the middle of a Sunday service, permit me to testify: Leaving feels fantastic. It feels like a cool shower on a really muggy day. It feels like the first sip of strong coffee in the morning, or a nice Sicilian wine at the end of the day. It feels like when you know your hair looks good. I cannot possibly over recommend it. When you have a choice between staying in something that makes you feel bad and going, try going. It's amazing.

The idea that it's somehow necessary to hear the enemy to know the enemy is a gigantic load of garbage that people who rarely have to engage with the enemy get the luxury of entertaining. The rest of the world understands that when, because of your race or gender or sexual orientation or immigration status, you have been granted a whole lifetime of unsolicited feedback on your status as a human, you don't need to pay $80 to hear it. You already know what that guy thinks.

While some defenders of what they misconstrue as free speech insist that the market of public ideas will surely let the better ones emerge victorious, it's the responsibility of the gatekeepers of that market to behave with discernment and empathy. Whose signal are you going to boost? It doesn't have to be one you agree with. But some ideas are just gross and some behavior is unacceptable, and the less misguided fear — of not seeming open minded or balanced or a good sport — we can instill, and the more plain, simple, "I'm not going along with this because this is not OK" courage we can foster, the better for everyone. The better for those who don't have as much power to say nope.

Remember how everybody used to smoke everywhere, and then businesses and individuals started saying, actually, no, not here, and then that was an acceptable stance? Picture that, but for Alex Jones. Or Louis CK. Or Steve Bannon. Deplatforming is effective. Ask Milo Yiannopoulos, who recently took to Facebook (yeah, he's still on Facebook) to complain, "I have lost everything standing up for the truth in America, spent all my savings, destroyed all my friendships, and ruined my whole life." Whomp whomp. That's the power of not feeding the trolls. Not paying to see them. Not clicking on their clickbait. Not going to their movies. But also: not co-headlining in their festivals. Not costarring in their projects. Not giving them editorial gigs. There's no great drama in that. No "storming." It's about having the decency to, whenever possible, not be silent. Malcom Gladwell may call giving idiots a microphone "a festival of ideas." A lot of other people agreed this week is sounded more like a freak show. If a drunk person wants to drive, you don't buy him a car. And if someone who disgusts you wants to speak, you don't hand him a microphone. You leave the room.

"There is racial resentment"