Ivanka Trump: "There's no equivalency" between Hillary Clinton's private email use and my own 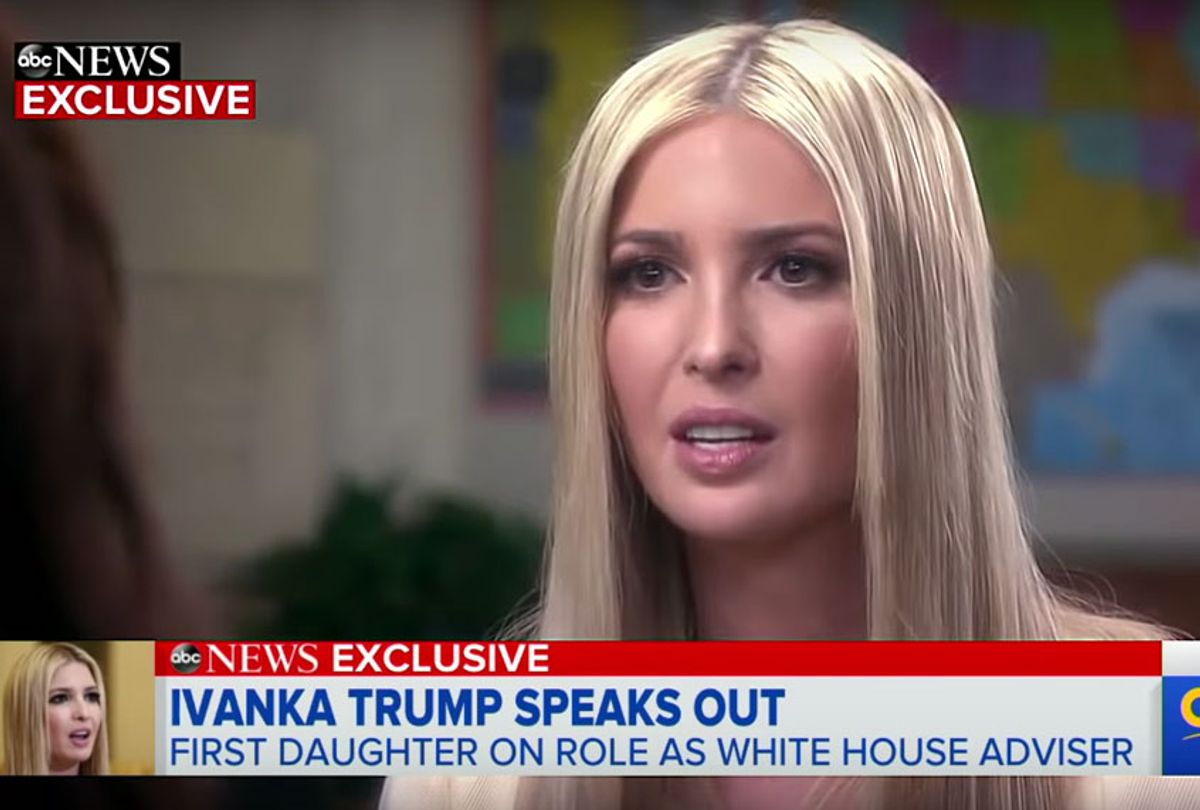 Ivanka Trump, the president's eldest daughter and a senior White House official, publicly denied comparisons of her use of private email for government work and that of Hillary Clinton, her father's Democratic challenger in the 2016 presidential election.

"All of my emails are stored and preserved. There were no deletions. There is no attempt to hide," she told ABC News in an interview released on Wednesday. "There's no equivalency to what my father's spoken about."

Republican and Democratic lawmakers have called for an investigation into Trump's email use following reports last week that she used a private email account to send hundreds of emails to Cabinet Officials, White House aides and personal assistants throughout much of 2017. Multiple news outlets have reported that many of the emails were allegedly sent in violation of federal records rules, which requires that certain types of emails be sent through government servers for record-keeping purposes.

President Donald Trump repeatedly denounced Clinton's use of a personal email and a private email server throughout his 2016 presidential campaign, famously inciting his supporters to chant, "Lock her up!" — a call to send his Democratic rival to prison over her own email scandal. The president's supporters have continued to chant "Lock her up!" at his rallies during the 2018 midterm election cycle.

The New York Times reported last week that, once in office, the president repeatedly pressed Justice Department officials — including recently appointed acting Attorney General Matt Whitaker — about the status of investigations relating to his 2016 presidential opponent Hillary Clinton. Then-White House counsel Don McGahn reportedly rebuffed the president and concluded that he did not have the authority to request an investigation into Clinton. McGahn also warned him that such a request would likely prompt accusations of abuses of power.

The FBI investigated Clinton for her use of a personal email account and a private email server while serving as secretary of state, but ultimately found no basis for charging her. The State Department also investigated Clinton's actions and found that they had violated the agency's rules.

Other government officials, including Vice President Mike Pence (when he was governor of Indiana) have been found to have used private emails for government work. Ivanka Trump's husband and fellow White House adviser Jared Kushner was also caught using a private email for government business in September 2017.

Rep. Trey Gowdy (R-S.C.), who currently chairs the House Oversight Committee, has demanded that the White House turn over information on Ivanka Trump's use of a personal email account when performing public work. Gowdy established Dec. 5 as a deadline for complying with his demand and wrote that Ivanka Trump's use of a private email account while serving as an adviser to the president might "implicate the Presidential Records Act and other security and recordkeeping requirements."

In addition, Sen. Ron Johnson (R-Wis.), the head of the Senate's Homeland Security Committee, has requested a briefing from the White House on the matter.

Democrats on the House Oversight and Government Reform Committee plan to investigate Ivanka Trump's use of a personal email account to determine whether she violated federal law when they regain control of the House of Representatives this January.