From Stacey Abrams to Stormy Daniels, these are the women who spoke out despite efforts to keep them quiet 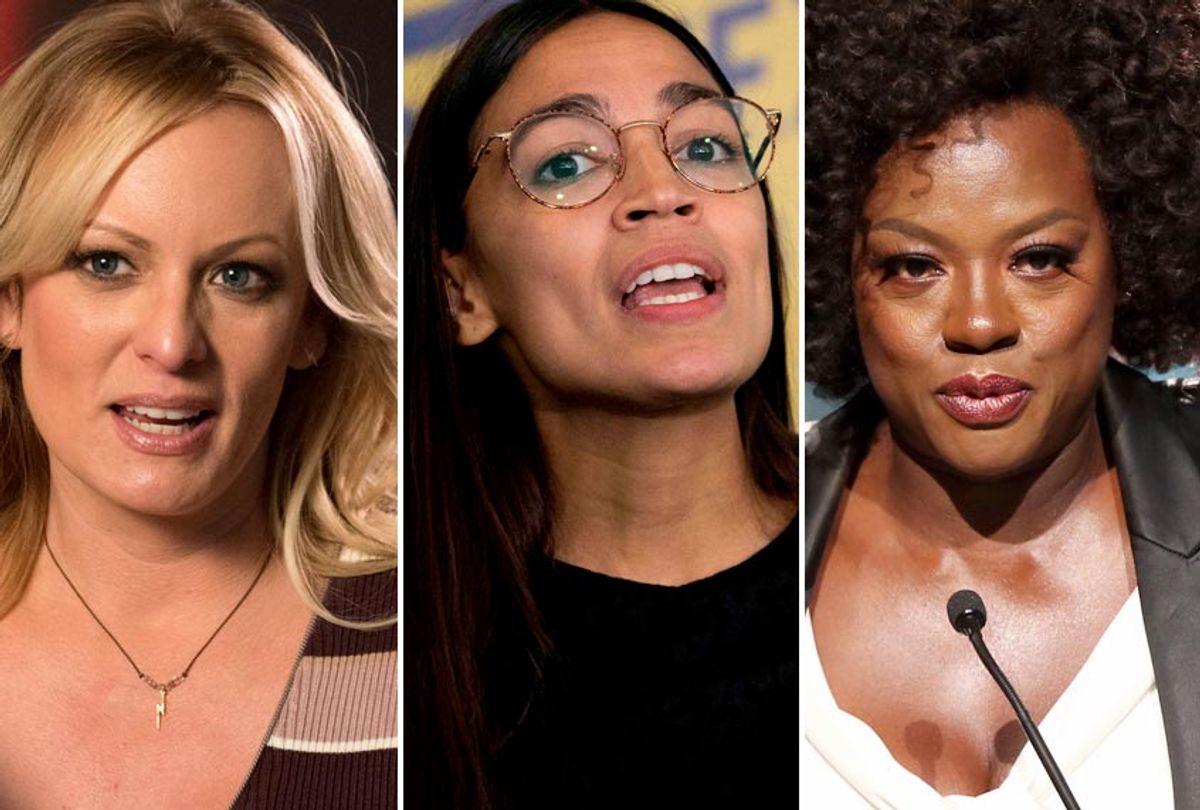 It's been 26 years since the so-called "Year of the Woman," when a record number of women were elected to Congress in 1992. Four senators and 24 representatives were sent to Capitol Hill, following contentious Supreme Court hearings for then-nominee Clarence Thomas, who was accused by Anita Hill of sexual harassment.

On several levels, the themes of 1992 have made repeat, and amplified, appearances this year. The #MeToo movement became fully realized with women reclaiming and reframing their stories, as President Donald Trump, himself accused many times of sexual predator behavior settled further into the White House. Trump nominated Brett Kavanaugh, also accused of sexual assault, to the Supreme Court, and while Kavanaugh would go on to attain a seat on the highest court in the land, serial sexual predator and former beloved comedian Bill Cosby was sent to prison for the drugging and rape of Andrea Constand, only one of dozens of women who have spoken out against Cosby with credible accusations of assault.

In perhaps a more direct indication of a "Year of the Woman" in politics, more than 100 women were voted to Congress in the midterms, representing diverse ethnicities, backgrounds, religions and ideologies. This culture of opposition — of speaking up and out, of organizing and mobilizing, while structural and cultural blockades continue to be dominant and suffocating — has been inextricably linked to the experiences and progress for women (and other minority groups) in this country.

So here's an year-in-review list, in no particular order, that seeks to acknowledge the women who demanded we hear them in 2018, despite the very real barriers that attempted to keep them quiet.

Stacey Abrams' commitment to a more equitable world has never wavered. She ran an incredible, inspiring campaign in Georgia to become the first black woman governor in the country, and fought to the end, despite rampant voter suppression in which the architect, Brian Kemp, served as both her opponent and the race's referee. Abrams has said she will run again and in the meantime is working to systematically alter the widespread voter suppression in the state, so that democracy becomes less of a dream and more of a reality for those who are black and low-income in Georgia, and around the country.

Actress/activist and trans woman of color Indya Moore, 23,  is one of 2018's breakout stars. She plays a central role on Ryan Murphy's Golden Globe-nominated "Pose," and Moore's elevation in the world of entertainment has opened the door for her to speak much louder about social justice. In "Pose" and through her own social media presence, she's putting the plight of trans people of color center stage (an urgent message in these times), and speaking out against transphobia, racism, sexism and all forms of inequality and bigotry. As she told GQ: "Trans women, especially black queer and trans women, are always in the front lines whenever there is a threat against human identity or the human condition. Whatever it is. Whether or not we’re included—and we’re often included in it—we’re on the frontlines of every civil rights movement." But as Moore and others continue to underscore, any movement that cares about liberation is incomplete if the freedom and self-determination of trans people are not part of its vision.

After long being ignored by the Democratic Party and national media, once Alexandria Ocasio-Cortez won the primary in New York's 14th congressional district, defeating incumbent Joe Crawley, she became hyper-visible and has been consistently antagonized since. But a familiarity with her platform explains why the conservative right and the DNC establishment alike are so fearful of Ocasio-Cortez's power. She's a socialist and woman of color, and a progressive politician who advocates for environmental justice, the abolishment of I.C.E., an end to private prisons, restricting Wall Street's greed, Medicare for all, gun control, solidarity with Puerto Rico, and much more. And yet because her politics are rooted in imagining a more equitable world, the incessant jabs about her clothes, her economic background, and even her intellect keep coming. But Ocasio-Cortez is no pushover, and while her political career is just beginning, her Twitter clap-backs are already legendary.

Michelle Wolf has not let access nor employment quell her voice. For roasting the president, his administration, and the media — to their faces — brilliantly and brutally at the White House Correspondents Dinner in April, she received condemnation from both liberals and conservatives. But despite widespread admonishment, Wolf did not quiet down and went on to tell searing truths on her short-lived Netflix show, which was canceled after only ten episodes. While Wolf is in a privileged position not to have to worry about one job loss, it is admirable that no matter which space she enters, whether a fancy Washington dinner or late-night TV, she will always tell the truth no matter the personal costs. After Wolf's WHCD monologue, the WHCA announced that they were discontinuing the comedic tradition. Who could dare follow Wolf anyways?

Lucy McBath's 17-year-old son was shot and killed in 2012 by a white man who argued with the teenager about playing his music too loud. While grieving the loss of her child, she emerged as a vocal advocate against gun violence. In late 2017, McBath decided to move from activism to politics, announcing a bid for the Georgia statehouse. When 17 people were gunned down in Parkland, Florida in February, McBath felt her message was more urgent and aimed higher. So McBath, a black woman and first-time candidate who ran on a message of gun control in the deep south — in a state with some of the highest rates of gun ownership in the country — managed to defeat Republican incumbent Karen Handel in Georgia's 6th congressional district, which had been Republican since 1979. After her victory, McBath wrote on Twitter: "This win is just the beginning. . . We’ve sent a strong message to the entire country. Absolutely nothing - no politician & no special interest - is more powerful than a mother on a mission."

Actress Aurora Perrineau's #MeToo disclosure was hijacked by Lena Dunham, who came forward to defend Perrineau's alleged rapist, a writer on Dunham's HBO series "Girls" and to essentially call the young actress a liar on the basis of having "insider information." Dunham recently revealed that she in fact was the liar in this situation and had no such information, only a blind loyalty to the accused. Still, Dunham has been given an exhaustive amount of time and space to apologize, but little room has been given to Perrineau's voice. I wanted to include Perrineau on this list because Hollywood and media need to do better in this regard. Where are the Hollywood Reporter columns or luncheons for Perrineau? Where are the New York Magazine profiles? In an era when so many women are reclaiming their stories, how do we handle the women who have had a hand in silencing them going forward? My hope is that in 2019, Perrineau's story will stop being used as a clickbait topic for Dunham's press and we are finally ready to hear her story instead.

Eleven-year-old Naomi Walder (who's now 12) stunned the world with her eloquent, breath-taking speech at the March for Our Lives demonstration in Washington D.C. where young people protested gun violence. “I am here to acknowledge and represent the African American girls whose stories don’t make the front page of every national newspaper, whose stories don’t lead on the evening news,” Wadler, the event's youngest speaker, said. “For far too long, these names, these black girls and women, have been just numbers,” she continued, “I’m here to say ‘Never again’ for those girls, too.” This future president is continuing the fight, which she says is personal. "Not only am I fighting for other black girls, I’m fighting for myself as a black girl," she told Teen Vogue. Walder's insightful words and politics have helped hold the gun control movement attentive and accountable to the way gun violence disproportionately effects communities of color.

Viola Davis has had an incredible year. While her award-winning acting chops have proven her talent at playing a wide range of characters, this year her own voice made an impact as well.  Davis revealed that she regretted starring in "The Help," a film that has long been criticized for its white-savior complex, and Davis affirmed that regardless of the film's intentions, the voices of the black women domestics who were forced to leave their own babies every day to raise and clean up after white ones, were ultimately marginalized in a story where they were supposed to be central. Then in November Davis gave an impassioned, unfiltered speech while receiving the Sherry Lansing Leadership Award about the continued sidelining of black women in Hollywood. "I cannot lead with bullshit," Davis said. "Stop taming us."

While President Trump's version of events regarding hush payments to adult film star Stormy Daniels and former Playboy Playmate Karen McDougal, who both claim they had affairs with him in the past, in the days before the 2016 presidential election has changed constantly, Daniels and McDougal have stuck with their accounts of events. Right wing media either vilified or tried to silence both of these women, and jabs at their professions reeked of classism and misogyny. But these women refused to back down. My colleague Nicole Karlis has long heralded Daniels as a "feminist hero" and after Michael Cohen's and AMI's admissions of the roles they played in attempting to keep both of their stories away from the public eye, let's absolutely add McDougal to that categorization.

The world watched as Christine Blasey Ford relived the most horrific moments of her life as she testified before the Senate Judiciary Committee about the time when then-Supreme Court nominee Brett Kavanaugh allegedly attempted to rape her in high school, and how it had a lasting, debilitating effect on her life. Her testimony did not stop Kavanaugh's ascent, just as many women's stories — and our histories of violence — have proven to not carry more weight than an alleged predator's accomplishments. It's a reality that Ford likely knew, and nevertheless she decided to speak up. In her testimony, we saw strength and bravery, pain and resilience, and it provided hope for many others that no matter what happens, we will not stop telling our stories and demanding our voices be heard.