Why "Bird Box" is smashing Netflix records: We're so close to apocalypse ourselves 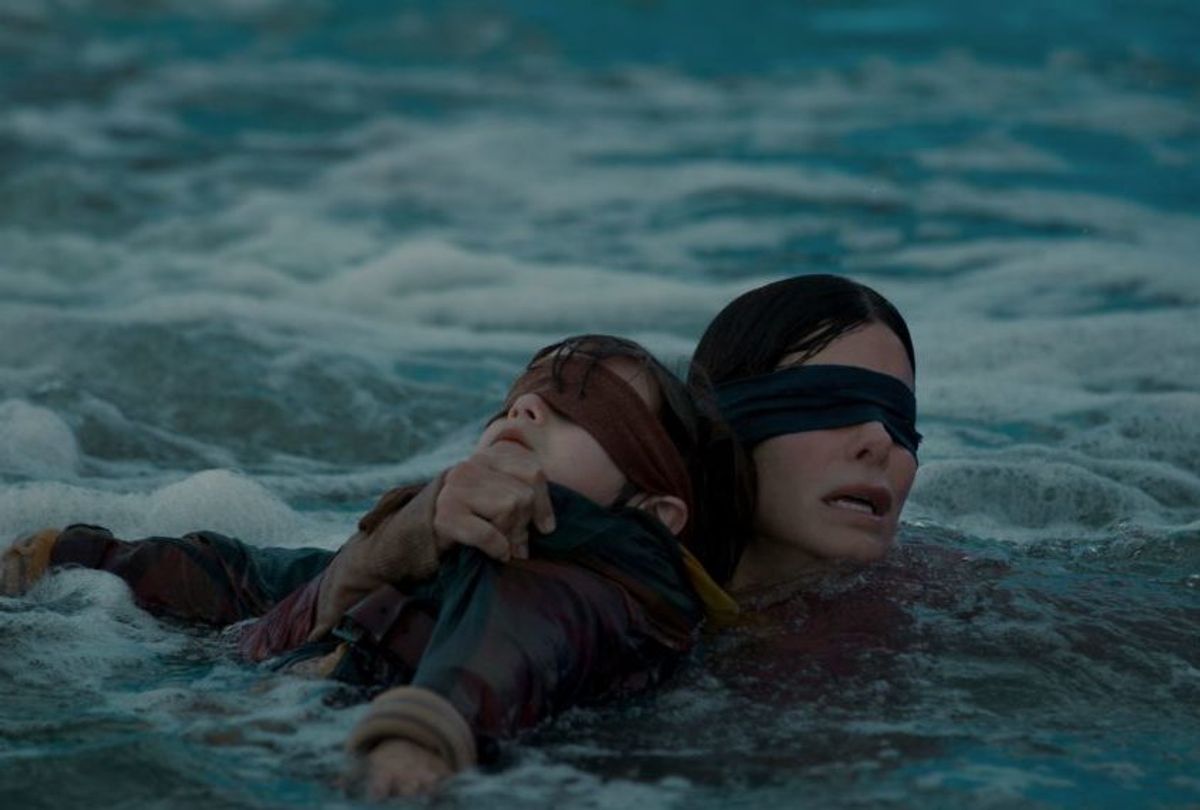 The insane response to “Bird Box,” the Sandra Bullock end-of-the-world film that Netflix dropped December 21, shouldn’t be shocking to anyone who endured 2018. In case the news and circumspect response to it has escaped you, the company claims that more than 45 million accounts have viewed the film, with a “view” counted as watching at least 70 percent of it.

Netflix, like other video on demand services, holds its viewership data close to the vest, calling out its success in the vaguest terms possible. That make the platform's reveal of a concrete number a first. The streaming service also says “Bird Box” broke its record for its most-watched Netflix film over the course of seven days, and all of this sudden transparency is causing no shortage of debate across the industry.

That said, as Business Insider points out, this jaw-dropping number has not been verified by a third-party measurement company, which is standard practice for comparable data such as box-office results and TV ratings. And the story goes on to quote a producer who declines to be named.

"I'm a huge fan and proponent of Netflix, but to believe that nearly one-third of all of their subscribers not only watched 70% of the movie, but did so in the first week of it being on the site is all but unfathomable," one producer told Business Insider over the weekend. "I want to believe it, but just can't. It's not a watch for the faint of heart after all."

The skeptic and professional entertainment reporter side of me agrees that any unverified metric is highly suspicious.

However, the woman recovering from the agony of the year that just was, and gritting her teeth for the 365 days to come, is inclined to believe Netflix. This is a statement based upon a gut feeling, that space in the core that’s willing to entertain the possibility that certain unbelievable things may exist, such as aliens, Bigfoot, whatever entity is haunting Hill House and a certain male comedian’s conscience.

But, honestly, that Netflix-reported number is a bit more plausible than that for two reasons. The first is that on the Friday before the holiday week and the six days that followed — which again, fell at the end of the never-ending face-punching tour that was 2018 — sitting down to watch a blindfolded Miss Congeniality lead also-blindfolded munchkins through the woods was a simple proposition.

Note: Mild spoilers follow for "Bird Box;" proceed at your own risk.

I don’t know what kind of year that guy had, but for most of us 2018 was the year all of those apocalyptic cinematic fantasies became that much more plausible. The year that was began with a false ballistic missile alert in Hawaii, panicking residents with fears they haven’t been confronted with since Pearl Harbor.

Since then we’ve contended with mass shootings, surprise hurricanes, a climate change timeline giving us about a dozen years to train up for Fury Road, and wildfires tearing their way through California and parts of the Northwest. We’ve had a number of asteroid near-misses. Our president has taunted a foreign dictator who is developing a nuclear arsenal. Artificial intelligence is moving closer to sentience.

Conflict zones in other countries are heating up, extremist politics has gained a foothold in Europe, and white nationalism has gone mainstream in the United States.

All of these bring us to a rebuttal to that producer’s assertion that “Bird Box” is “not a watch for the faint of heart.” Given all of that I just mentioned, “Bird Box” is precisely the sort of cinematic nightmare to which any person who has made it out on the other side of the last year can relate.

If the most memorable psychological thrillers and horror movies are metaphors of society’s ills, “Bird Box” is a two hour and four minute manifestation of Trumpian fear and loathing. The horror that descends upon the Earth begins in Russia, but Bullock’s character Malorie is comfortably in her own bubble apart from the world. She’s single, pregnant, sullen and depressed — and, of course, an artist.

Like her sister (Sarah Paulson), an equestrian, she counts on the world full of conveniences that allow her to sail through life solo. The world is sunny and safe and full of horses, until it isn’t. Within the space of a prenatal appointment it falls into chaos.

“Bird Box,” directed by Susanne Bier, jumps between this present and one five years after when a blindfolded Malorie, leading a couple of similarly unsighted moppets, is forced on a desperate journey toward a place that’s allegedly safe in a world that clearly is not. She’s also alone, which means in the part of the story taking place five years in the past, we get to see how the rest of the motley band of survivors she falls in with bite it.

The culprit is an invisible evil that takes over the minds of those who glimpse it. Some find it to be beautiful. Others take one look and want to kill themselves. The survivors Malorie falls in with are ruled by paranoia, and hesitate to trust one another. When other desperate survivors knock on the door, one rails at the dangers of letting them in — even refusing to give access to another vulnerable person. He insists that eventually one of these strays will doom them all.

As is the way with all present-day entertainment, any political or cultural commentary one derives from “Bird Box” is coincidental, since its story is based on a 2014 novel written by Josh Malerman. But that doesn’t stop a person from perhaps relating to such a predicament which, as is the way of end-of-the-world movies, tosses a crew of characters from different walks of life together in a small space. It also helps that these characters are played by the highly likable B.D. Wong, Lil Rel Howery (who was wonderful in “Get Out”), Jacki Weaver, Trevante Rhodes, any and all of whom a reasonable person would be lucky to be trapped with in an elevator, let alone at the onset of Armageddon.

But this being a microcosm of America, Malorie also is thrown in with party poopers played by Rosa Salazar, Machine Gun Kelly and … John Malkovich? Yes, John Malkovich.

Is it good? Not really, but it doesn’t need to be. We’re in the midst of the coldest season at the tail end of a most exhausting year. And Netflix knows exactly what it’s doing when it drops films like “Bird Box” at this time. Remember, this the company that gifted us in 2017 with Will Smith playing a cop paired with an orc for a partner, having adventures in an alternate but still grubby and crime-infested version of Los Angeles. It also had elves. It was terrible. I can say that because I watched 100 percent of it.

And like that mess, “Bird Box” is defined by its derivative plot design and its contrivances. If you’ve seen any George Romero film or its descendants, including “The Walking Dead,” you have a good idea of how it turns out. If you’ve seen “A Quiet Place” recently, this film compares quite badly. Then again, you didn’t have to pay anything extra for it, since it comes with your Netflix subscription.

Anyway, the borrowed structure works here, if you watch from a certain frame of mind, namely that we're right to suspect that we’re living under a shadow threatening to shred the thin safety net of stability that stands between polite if troubled society and annihilating strife and anarchy. That any moment it’s all going to come apart.

There’s also hope in seeing a woman played by Sandra Bullock be portrayed as steely enough to survive the thrashing death of modern civilization. That places her in the same ranks as Danai Gurira’s Michonne, elevated to the top of the leadership ranks in “The Walking Dead” (and who raises Judith to be a badass), and any number of female heroes left holding the end at bay in throughout television and movies.

For in addition to forcing us to accept the notion that life as we know it may cease in 2018, we also lived through the collective rage women felt grew in part from being tired of smiling at the notion that, as the late Texas politician Ann Richards famously put it, we have to do everything that men do, only backwards and in high heels.

Capping that off with a movie in which Sandra Bullock has to survive, and keep more vulnerable others alive, in a world defined by chance and will and where planning is useless, seems appropriate. And the fact that she does so successfully for at least five years longer than most of the world — and in large part, blindfolded — might even be downright inspiring to the average emotionally deflated viewer.

You can’t blame millions of us for riding to a raft like that for 124 minutes, even if it’s flimsily constructed one and barely floats. That just makes it a 2018 kind of diversion, and like the year that yielded it, it’ll be lost to the flood soon enough.