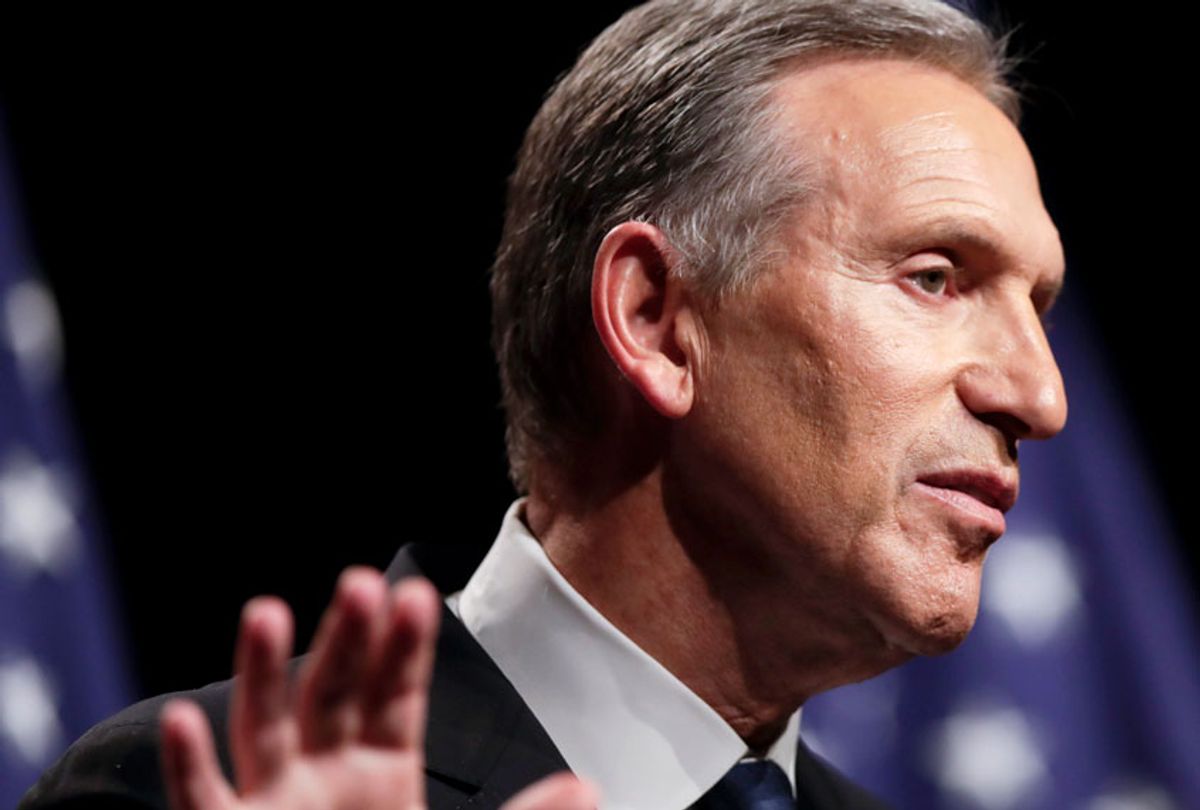 Howard Schultz, the former CEO of Starbucks who is weighing whether to mount a presidential bid in 2020 as a "centrist independent," said he does not "see color" in people, in a reference to race.

Schultz made the comment during a CNN Town Hall while answering a question about the anti-bias training at Starbucks stores across the country following the arrest of two black men at a Philadelphia location last year.

The former Starbucks CEO said the company "learned a great deal" from the incident, which spurred allegations of racial bias and led to protests after Rashon Nelson and Donte Robinson were accused of trespassing when they visited the coffeehouse chain for a business meeting. Nelson and Robinson were handcuffed and removed from a Philadelphia Starbucks last year, where they were waiting to meet a friend to discuss a real estate venture but had not purchased anything. A store manager called the police on the pair.

In response to the arrests, thousands of Starbucks stores across the country closed for the day to hold a company-wide anti-bias training session. The coffeehouse chain also changed its restroom policy to allow anyone to use a Starbucks facility – not just paying customers.

"It was a terrible moment for the company, it's not something that we're going to forget and it's something we learned a great deal from – and we're still learning about," Schultz said Tuesday.

At other points throughout the event in Houston, Schultz criticized progressive Democrats calls to increase taxes, but he did not provide any details about how the rate he believed the richest Americans should pay.

"The headline is here," Schultz said. "I should be paying more taxes, and people who make this kind of revenue and are of means should pay more taxes."

Pressed by CNN's Poppy Harlow to provide some kind of detail on what that number would be — such as a hike of 2 percent or 10 percent or 20 — Schultz said he did not know.

"I don't know what the number is," he said. "What I'm suggesting is that I should be paying higher taxes, and I think people across the country are willing to pay higher taxes."

Schultz, who has never held political office, was clear on what he did not support: Rep. Alexandria Ocasio-Cortez's proposal of a 70 percent marginal tax rate on income earned above $10 million, which he has previously called "punitive." On Tuesday, he also slammed the New York Democrat's Green New Deal, an ambitious plan backed by Ocasio-Cortez and other Democrats to combat the threat of climate change and create jobs, as "immoral" and "not realistic."

"Let's be truthful, this is one thing that I’m trying to do tonight: tell you what I believe, tell you what is true and speak to you from my heart," he said.

Schultz did not offer specifics on how he would address those issues differently.

The billionaire former CEO also did not commit to selling his Starbucks shares if he were to be elected president. Instead, he said he would "do nothing whatsoever to have any conflict of interest between my investments overall or my interests in the company that I love, because I will put the role and responsibility and the accountability for results first if I run for president. And I'm fortunate enough to win."

Schultz has not formally thrown his hat in the ring, but his proposed bid is already contentious. The former CEO has received a chilly reception on and offline, with some arguing that a third-party bid would help re-elect President Donald Trump by siphoning off votes from the Democratic nominee. On Tuesday, Schultz would not confirm that he would drop out of the 2020 race if polls suggested his candidacy would provide Trump with another four years in the Oval Office.

Schultz stepped down as chairman and CEO of Starbucks last year, and said at the time that he was exploring what he could do to best serve America. If he enters the 2020 race, he will join what is expected to be a very crowded list of candidates that already includes California Sen. Kamala Harris, New Jersey Sen. Cory Booker, Massachusetts Sen. Elizabeth Warren, Minnesota Sen. Amy Klobuchar, Hawaii Rep. Tulsi Gabbard and former secretary of Housing and Urban Development Julián Castro. Former Vice President Joe Biden, Sen. Bernie Sanders (I-V.T.) and former Rep. Beto O'Rourke, who fell short in his campaign against Republican Sen. Ted Cruz in the Texas Senate race during the 2018 midterm election cycle, have also hinted that they are weighing a White House bids — and these names are far from the complete list.