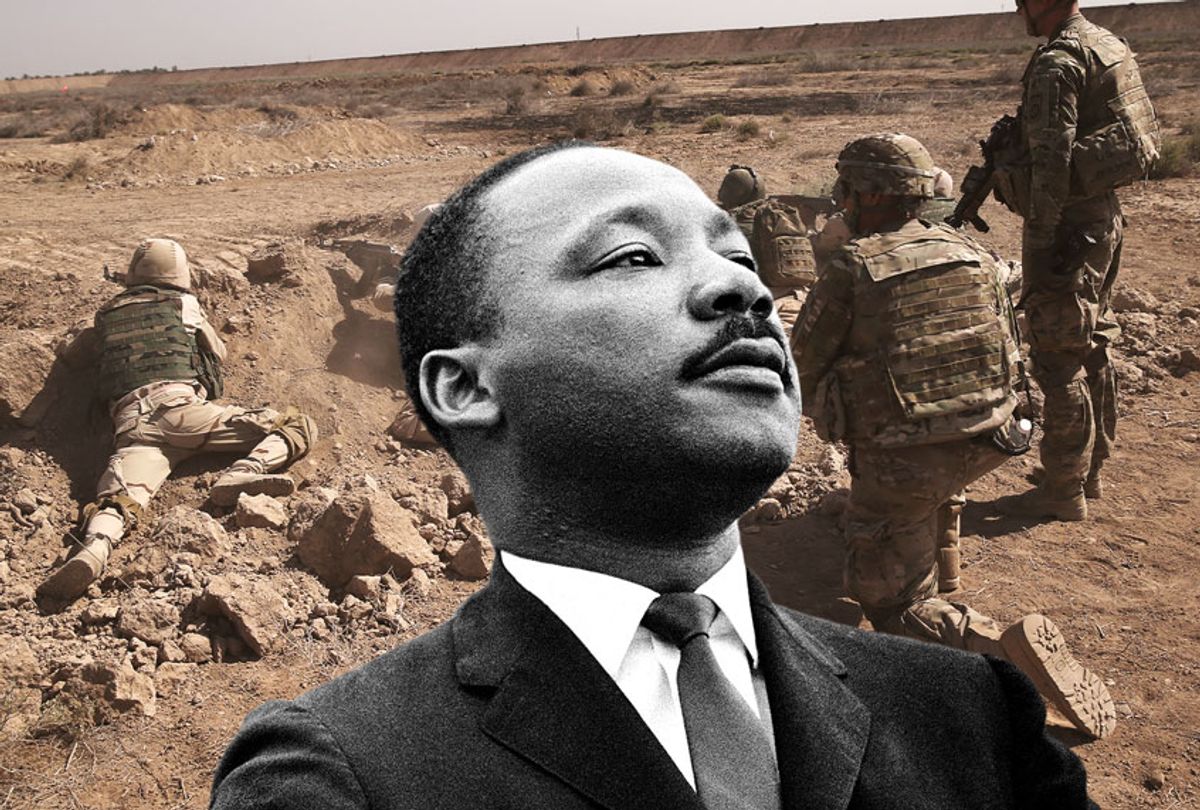 This upcoming Martin Luther King Jr. Day promises to be an especially sad one. As evinced by the deteriorating social circumstances both at home and around the world, we have done a poor job living up to his legacy.

And while we still have Dr. King’s prophetic voice as a beacon, it feels like we somehow went into reverse, deep into a dystopian wilderness since he died. By my calculation, we are about as far from the clearing of his “promised land” as we have been at any point in my 64 years.

“When machines and computers, profit motives and property rights are considered more important than people, the giant triplets of racism, materialism and militarism are incapable of being conquered,” wrote Dr, King in his last book, “Where Do We Go From Here: Chaos or Community?” He continued: “A civilization can flounder as readily in the face of moral and spiritual bankruptcy as it can through financial bankruptcy.”

As the billionaires train the firehoses of their vast wealth on the Democratic presidential primary process to "save" capitalism as we know it, progressives should keep in mind that Dr. King was a principled critic of capitalism.

As Vincent Harding recounts in his introduction to Dr. King’s seminal book, the civil rights leader famously said “something is wrong with capitalism … there must be a better distribution of wealth, and maybe America must move toward a democratic socialism…”

He has been dead and buried for over half a century, and yet King prophesied where we are now in 2020.

We have elevated to the presidency a man who used racial animus as a weapon to divide a nation so he could rule it — and now has admitted to using the power of the military he now commands to kill so he can continue to stay in power.

That corruption of our democracy by this bloodthirsty narcissist is unfathomable — and yet the corporate news media can’t press too hard on that fact for fear of losing access to the tyrant who drives our news cycle. Trump now has the entire planet on edge waiting for his next reckless act of self-preservation.

Instead, the media is consigned to cover him with the trappings of his office, crediting him with seeking an “off-ramp” because he did not carpet bomb Iran. And as with their reporting on the Trump miracle economy, which of course only benefits the one percent and corporations, this mainstreaming of his criminality helps build the scaffolding for his re-election.

During the Obama years, the corporate news media used the MLK inflection point as a kind of collective pat on the back for the American psyche. It reassured us as a nation that we were pretty far along on the path of being a more tolerant, righteous and just nation.

There was a poetic symmetry in 2008 when President Obama took the oath of office for the first time on the steps of the nation’s Capitol, directly opposite the Lincoln Memorial, where 40 years earlier Dr. King had given us our marching orders.

At that point the United States was years deep into a global war on terrorism ginned up by the George W. Bush administration and based on a calculated deception that Iraq possessed weapons of mass destructions and that it had played a role in planning the 9/11 attacks.

Over the arc of President Obama’s eight years, he essentially carried over the two most significant Bush era policies when it came to the global war on terrorism and the bailing out of Wall Street at the expense of everybody else in response to the Great Recession.

Thus, after sixteen years of an ill-conceived continuum, the stage was set for the rise of “populist” Trump. Then-candidate Trump promised to end the further-notice wars and championed the cause of working-class Americans abused by the elites who, in Trump’s view, preferred foreigners to red-blooded Americans.

The carrying cost of the further-notice global war had been obscured from the American people in two important respects. With the post-Vietnam War abandonment of the draft and shift to an all-volunteer military, the American people became increasingly disconnected from the stresses and strains on those that serve and their families.

And the hundreds of billions expended for what was a post-Cold War play for US global domination by the neo-cons were deliberately kept “off-budget” by being categorized as Overseas Contingency Operations, on an emergency basis without an expiration date, putting them beyond the discipline of sequestration.

Hiding the money was only part of the post-9/11 hijacking of our republic.

By 1968, the Nixon administration was beginning to learn an important lesson from the mass protest against the war in Vietnam. That war had become unpopular in no small part because it required a draft that drew on 2.2 million conscripts out of a potential pool of 27 million Americans.

The year before an influential paper written by Milton Friedman, the Nobel prize winner who turned free markets into a religion, advocated for an all- volunteer Army. Friedman’s reasoning was foundational to President Nixon’s creation of the Gates Commission, which he sat on along with Alan Greenspan, who was chairman of the Federal Reserve from 1987 until 2006.

The report noted that advocates for retaining the draft worried that not requiring all Americans to have some skin in the waging of war would “encourage military adventurism.” The Gates Commission countered that an all-voluntary force would “actually increase democratic participation in decisions concerning the use of military force” and denied it would result in unchecked “military aggressiveness.”

It is important to remember, as Prof. Andrew Bacevich, an historian and retired career soldier noted recently “the collapse of the tradition of the citizen soldier…is a tradition that harkens back to the very beginning of the republic and continued until Vietnam…The G.I.s who went ashore in Omaha Beach were not professionals. They were in it for the duration.”

In its place, we have, he believes “become comfortable with having a military largely detached from the people drawn from that very militant part of our society and sent out to wage wars that never end” and no longer tasked with discrete and tangible goals.

Bacevich concludes, that while Americans believe we have the greatest army on the earth, the U.S. military rarely wins decisively in conflicts. Likewise, they rarely achieve the amorphic goals they are assigned — goals like “spreading democracy,” “eliminating terrorism,” or “bringing order.”

America’s status as a perpetual war-fighting machine came after the end of the so called Cold War, when policy experts held forums about what our country could have the opportunity to accomplish with the “peace dividend” that would be realized by the collapse of the Soviet Union.

The leveling of the World Trade Center, and the post–“protect the endangered homeland” consensus commandeered not just our wallets but our imagination.

In the America of 2020, the nation has never been more economically out of whack, with income inequality accelerating. Since the Great Recession, when Wall Street greed set into motion the evaporation of $20 trillion of American household wealth, the collapse was most keenly felt in African American households.

And what is not widely appreciated is that the proliferation of federal debt — and all other manner of household, medical and student debt that have exploded since Dr. King’s death — are helping to fuel the wealth concentration that King warned us about.

As the percentage of union enrollment declined, so did American wages — and household debt exploded in place of real income growth. Meanwhile, our government itself was also being hollowed out by a growing debt addiction.

In just three years, the interest payments on our federal government debt will be bigger than our annual military budget which this year was close to $740 billion. Like a tape worm, debt service is devouring the nation from within. It is only a boon to those who speculate in it, and to Pentagon contractors who profit off the bulging military budgets.

It offers a place for great wealth to protect itself by investing in the instruments that carry it, as it does in similar bond offerings floated at the municipal, county and state levels of government. This is the great pyramid scheme whereby every public improvement, airport, bridge, tunnel or mass transit system has to tithe to investors who demand a piece of the action.

But the ever-expanding dominion of debt has not just helped turn our government into a protection racket for the one percent. It has subjugated an entire generation of young people that are shackled by $1.7 trillion in student debt many of them have no hope of repaying.

And there is a cynical convergence of our debt machine and the recruiting for the “volunteers” to fight our further notice wars.

As Vice reported, the Army met its recruiting goal last year in large measure by playing on the devastation wrought by the American student debt crisis.

“One of the national crises right now is student loans, so $31,000 is about the average,” Army Recruiting Command Major Gen. Frank Muth told Vice reporters. “You can get out [of the Army] after four years, 100 percent paid for state college anywhere in the United States."

In a society in which many believe that a lack of a college degree means consigning oneself to economic oblivion, young people are ripe for the picking. As Thomas Gokey, an activist with the Debt Collective, told Vice: “Debt is a form of social control. You can force people to do all kinds of things if you put them in debt first, including waging unjust wars, killing and hurting other people, and risking [their] own life and limbs.”

But debt as “social control” is not merely a tool used to capture the young. It increasingly subjugates the entire nation, particularly with the latest $1.7 trillion Trump GOP tax cuts for the one percent and corporations. These were enacted despite the spike in defense spending, and even as we continue to ignore the existential threat of climate change.

The same folks that profit from the existing system are now making the case that because of our massive federal debt run up to serve the military and corporations, we will have no choice but to “reform” social security, disability, food stamps, Medicare and Medicaid. (Read: cut and destroy them.)

For our debt and its holders are our 21st century rulers. Without radical change, all of our choices at home and as a nation will be increasingly driven by servicing these indentures from which there will be no redemption.