In "Mr. Jones" James Norton plays a journalist who uncovers the truth of the Ukrainian genocide

The actor tells Salon, "We see more governments . . . manipulating the truth to maintain strangleholds of power" 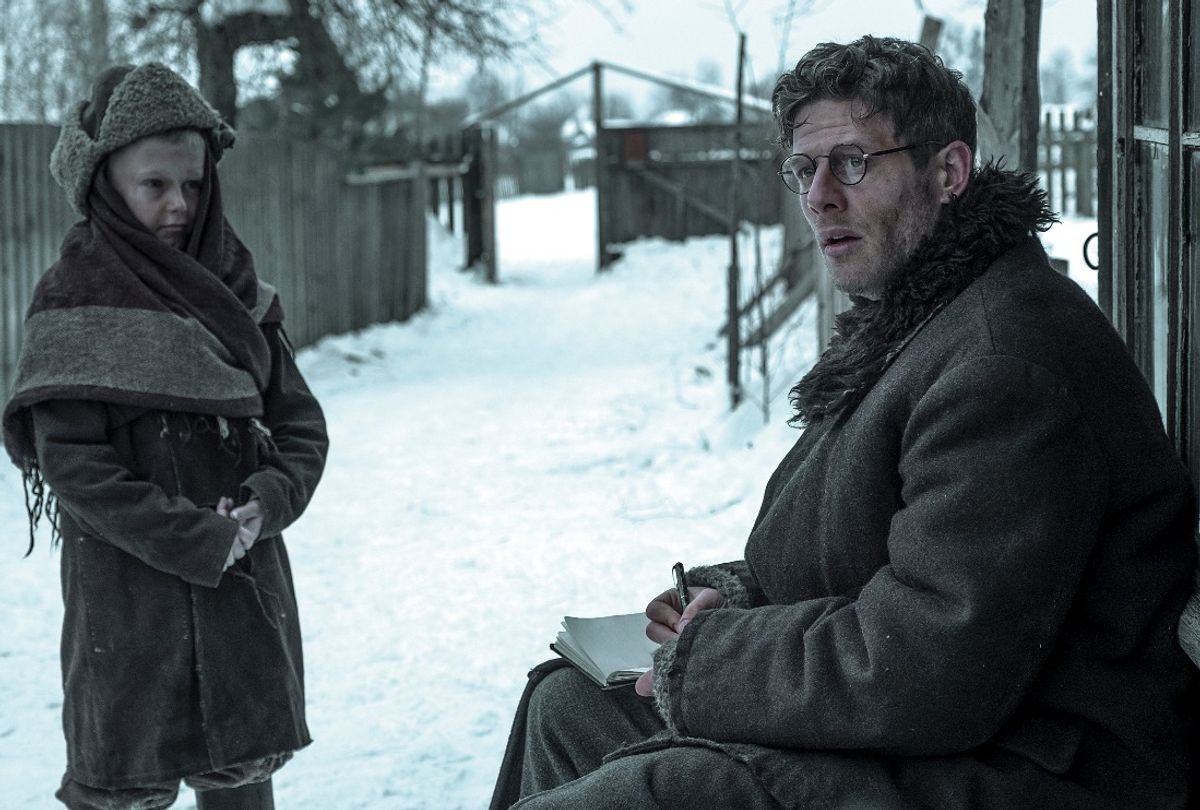 In Agnieszka Holland's absorbing drama, "Mr. Jones," now available on demand, James Norton ("Grantchester," "McMafia") plays the real-life title character, Gareth Jones, a Welsh journalist in the 1930s who is a foreign affairs advisor to Lloyd George (Kenneth Cranham). When Jones is let go from his position (allegedly for budgetary reasons), he arranges to visit the Soviet Union — hoping to interview Stalin — by working as a member of the press.

He quickly meets Walter Duranty (Peter Sarsgaard), an oily New York Times bureau chief in Moscow, along with Ada (Vanessa Kirby of "The Crown"), one of his employees. Jones is most interested in pursuing a lead given by his friend Paul (Marcin Czarnik) before he was murdered. Duranty tries to squash Jones's interest; Ada reluctantly nudges him in the right direction.

What Jones discovers firsthand — and seeks to report to the world — is the truth about the Holodomor, Stalin's forced famine in the Ukraine. In the bleak countryside Jones encounters some unspeakable horrors, and himself resorts to eating bark (and other things) to survive in the cold, desolate, brutal landscape where death is pervasive.

Norton's strong performance hinges on Jones's ability to recalibrate in every situation he finds himself in order to understand it better. He not only watches the cycles of history and follows the money, but he sees what is coming even when he gets in over his head. Jones exudes bravery as he lies, bribes, and schemes to ferret out the truths no one wants him to find, much less report. As "Mr. Jones" shows, Jones' reporting was not in vain; it inspired George Orwell (Joseph Mawle) to write "Animal Farm," a parable about the abuse of power.

Salon spoke with the actor via Whatsapp about playing Gareth Jones and making "Mr. Jones."

What, if anything, did you know about Gareth Jones before you made this film?

The embarrassing thing is that I had not heard of him, but most people are not aware of his life and contribution. The tragedy is that he paid the ultimate price in pursuit of a greater good. His legacy is uncelebrated. I didn't know much about the Holodomor either. At school, we were taught about Holocaust, not the Holodomor, as an international genocide. This was a wake-up call for me, and I'm proud of the opportunity to educate myself and bring attention to the horrors committed in Ukraine. It's a crime.

Jones is generally unflappable. His shrewd forecast of WWII falls on deaf ears, but he is always brave and risky, and at times, perhaps naïve. How did you portray his shifting awareness?

Like every character, you start with the literature and the academic side. There is some writing about Gareth. He was an earnest and serious man. Gareth left his writing, and scribblings, and notebooks. His family collated all of that material and it was accessible on the internet. I got a sense of his voice and his frenzied, constant motion — he was always in motion, pursuing something, not sitting in one space physically or intellectually.

But in embodying his headspace, you have to let go that research and what you learned. I [depended on] tiny details like his great aunt's letter that describes him jumping on the floor and playing like a clown with his niece and nephew. Those snippets pop, and are useful for establishing his boyish and naïve side. That's why he takes these incredible risks. It's not that he's an adrenaline junkie He doesn't see risks in his dogged pursuit of the truth. It was a joy to get inside his head. He was fundamentally good. He pays with his life for his pursuit of truth. Compared to these days of fake news and journalism, he had integrity.

There is a lengthy, harrowing sequence of Gareth Jones in the Ukraine. Can you talk about playing those scenes and the challenge of them?

That Gareth didn't know the severity of what was happening is a testament to the fact that no one knew the scale of crimes going on. His arrival in the Ukraine was completely blind. In a way, those are easy scenes to play. You are reacting to what is in front of you and it is so fundamentally shocking: a young child on the side of the road, his mother dead by his side. There is no acting. It plays out in front of your eyes. Those scenes were taken from the screenwriter's grandfather's first-hand account. They saw that happen. And to know that these scenes are glimpses of a huge, widespread problem . . .

The Ukrainian section of the film was physically challenging and very cold. It coincided with "The Beast of East" with minus-15 degrees Celsius temperatures and a wind chill of minus-25. The snow was up to our waists! But the actual performance side was easy. I was reacting to the weather or the horrible examples of genocide. We were in Ukraine and the sense of importance of the film for the Ukrainian crew and cast members was profound. One actress had relatives who died in the Holodomor. She was in tears saying how close this was to her family. It vindicated our being there.

Gareth Jones's writing inspired George Orwell. In what ways do you think this film has relevance to our contemporary world?

Right now, it is chillingly resonant. We see more governments becoming totalitarian and manipulating the truth to maintain strangleholds of power. It is not happening in distant lands, but on our doorstep. In exploring how history repeats itself, we learn lessons, and fall into the same traps. It is chillingly relevant, but it's encouraging to know there are people like Gareth, or Maria Ressa, or the Maltese journalist Daphne Caruana Galizia, who was killed three years ago. The importance of this was not lost on us. Every night, Agnieszka and I would discuss how relevant it was.

Did making this film prompt you to read or reread "Animal Farm"? Did you find new meaning in it, seeing monsters through talking animals?

I didn't reread it. I probably should have. I was getting my head in the Holodomor. We did research the link between Orwell and Jones and there was speculation about if they met, but his family denied it. The farmer in "Animal Farm" [Mr. Jones] is potentially named after Gareth. I should reread it, and it should have new meaning.

Jones is given a difficult choice when he is told that he should not report on what he saw in the Ukraine. If he does, six innocent men will be killed. What observations do you have about Duranty, who sells his soul, vs. Jones, a journalist who speaks up and speaks out?

What I liked about Duranty is that he's painted as a villain in the piece in history, but we also realize he has family, and his life is there. But that doesn't justify him getting into bed transparently with the Soviets. Gareth is an inspirational figure. I don't think he intended to die, but his pursuit of truth meant he fell into that sad end. But there are few people who are brave enough and obstinate and stubborn enough to be like Gareth. I'm not sure I'm brave enough to pay that price — or be like Duranty either.

Jones has an interesting speech where he talks about giving up his work to have a long comfortable life only to one day wake up screaming. What drives you to do what you do and take on projects like "Mr. Jones?" There is a rumor going around that you are a favorite to be the next James Bond.

I don't want to wake up screaming. The biggest fear is not making the most of your time in life or using it wrongly. Most people experience that. My own drive — that's a big question to answer — but in a nutshell, I want the work I do to matter. My sister is a doctor, and we have chats about this when we are both at home. I realize my life is not as important as hers, but we need entertainment. We [actors] don't save lives, but the arts make life worth living. Escapism and social consciousness — you can balance the two and have both. And hopefully, there is a Gareth for every blockbuster. I can't claim to have the integrity of Gareth, but I can stand by my work and feel proud of it. I'm lucky to have worked with Agnieszka.