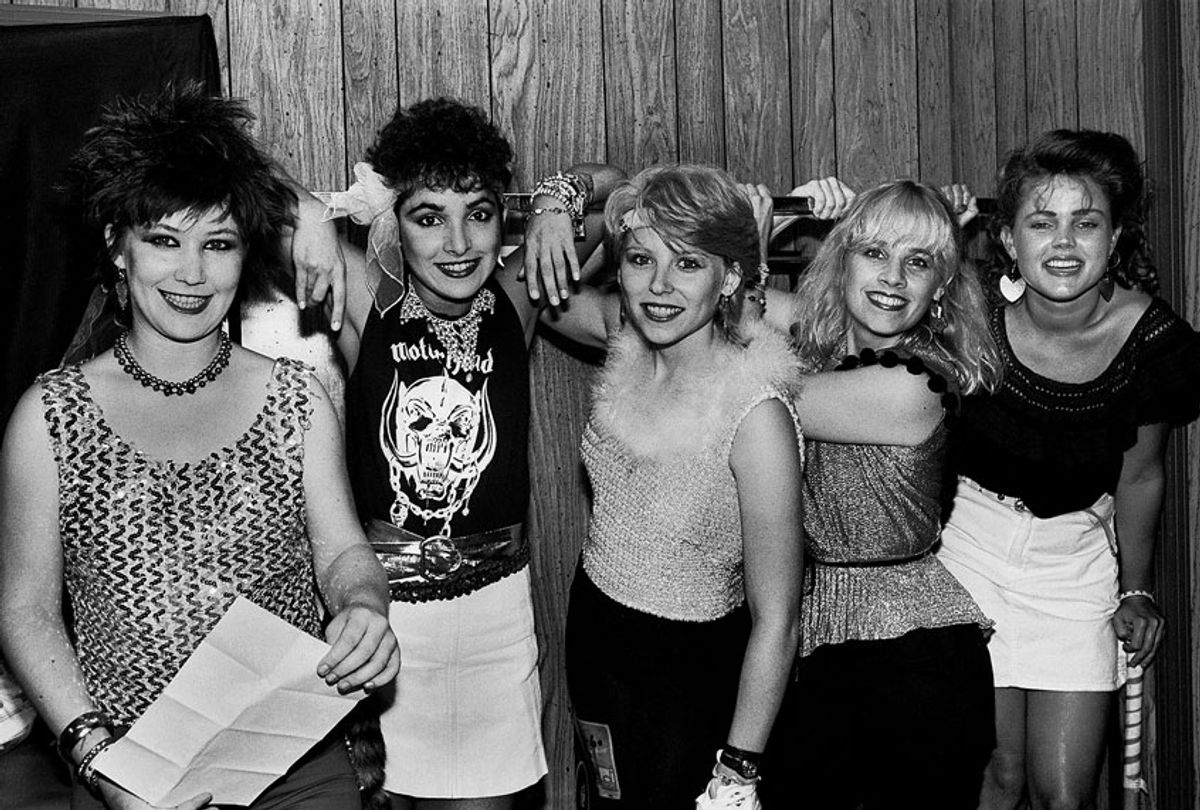 Maybe you don't even know all the spectacular things The Go-Go's achieved. They were the first all-female band who wrote their own songs and played their own instruments to earn a No. 1 album. They remain, by the way, the only one. They are among only a handful of musical acts who went to No. 1 on a debut album. Where they stayed for six weeks. At the peak of their '80s fame, their members faced addiction and open heart surgery. They've been on dozens of magazine covers and toured all around the world. But what really got me, somewhere in the midst of watching "The Go-Go's," was the nugget that Charlotte Caffey was once kicked out of Ozzy Osbourne's dressing room for being too rowdy. These girls, they're absolute legends.

After a Sundance debut earlier this year, Alison Ellwood's effervescent Showtime documentary now comes on the heels of Liam Firmager's "Suzi Q," a similar exploration of a revolutionary female force in popular music. The two films serve as nostalgic companion pieces, time trips though very different eras in the recording industry. More than that, though, they're testaments to the often overlooked legacy of female musicians. And they leave you wondering why so few women — and far fewer female bands — have been able to attain the success of their predecessors. "This is the dawning of a new era," Gina says brightly to the camera in a clip from 1981. It's four decades later, and Haim and The Chicks can't be everywhere, everybody.

Contemporary music fans likely have many of the same impressions of The Go-Go's that those of us who lived through their ascent did — that they were those chipper, chirpy girls who made music videos of frolicking in water fountains and waving on water skis. Charlotte, Kathy, Belinda, Gina, and Jane was the cool one, right? The iconic Los Angeles band's first album, "Beauty and the Beat," was a double platinum smash, but I promise that if you were an aspiring teen rock chick back then, your idols were Joan Jett and Chrissie Hynde, not those girls in their Jockeys on the cover of Rolling Stone. Their personalities seemed too sunny; their songs too catchy.

Yet as "The Go-Go's" makes clear, they were every bit as innovative and badass as Kristin Hersh or Kim Gordon. The price of their staggering success just happened to be their street cred. And if their reputation is one of pure fluff and their names are not yet in the Rock and Roll Hall of Fame, the shame is on us, not them. Interviews with the members of the group, as well as fellow musicians and pop journalists, as well as a treasure trove of archival footage and photographs, present a vivid portrait of a groundbreaking group.

The group came out of the Los Angeles punk scene of the late '70s, a motley collection of girls who started a band because, well, that was what you did back then. It was exciting, Jane Wiedlin admits now, to think they could be "Like the Shirelles and Shangri-Las . . . but this time were were going to play instruments." The only challenge was that they didn't know how to play instruments, a condition that fortunately has never been a dealbreaker in punk rock. Their first set was three songs long, and as a friend of the band recalls, "Two of them were the same song."

Watching the film, it's pure pleasure to witness such scrappy exuberance, such mayhem so enthusiastically pursued. It's awesome to learn that the women who gave us "Head Over Heels" played on the same bill as X. "People probably assume we were put together by some guy," a band member correctly observes, "but we did it all ourselves." The Go-Go's were never a slick act manufactured in a studio, pieced together to create a specific, media-friendly package. They were instead just a bunch of troublemaking young women, doing what women are still rarely rewarded for — making a whole lot of noise. "An American punk girl band who are objecting to being spit at?" the founder of Stiff Records fretted when they were shopped to the label. "I don't know if it's going to work."

This wouldn't be a rock and roll documentary without sex, drugs and drama, and "The Go-Go's" offers plenty of all. Yes, for any Go-Go's fanfic writers, there was at one point an intra-band romance. There was also Jane Wiedlen's far less secret love affair with Terry Hall of The Specials, a dalliance that produced one of the greatest pop songs of all time, "Our Lips Are Sealed." There was drug use, and partying, hidden and not so hidden. Those bubbly, energetic performances? Maybe she's born with it — maybe it's lots and lots of cocaine.

But there's so much more to the story of these talented women than a typical "Behind the Music" trajectory. As the burgeoning group fired and hired members and managers, their musicianship improved and sound evolved. You can hear the roots of that transformation as Charlotte Caffey describes how she wrote "We Got the Beat," the song that propelled them forward in their pop fame but which also remains an undeniably pure rock 'n' roll tune.

Even as they became Top 40, MTV-ready darlings, the band had a famously "take no crap" attitude that no doubt seemed at odds with the tutus and tiaras image. They gave one of the most famously debauched guest performances ever on "SNL," rivaling The Replacements for what Gina Schock recalls as "cross-eyed drunk" ballsiness. They took irreverent Polaroids that became instantly notorious. And then of course there was the incident in Rio when the Prince of Darkness himself, Ozzy Osbourne, had enough of their antics. In a decade famed for excess, the ladies earned a place in the big leagues.

It was creative differences that inevitably drove the band apart — conflicts over songwriting in particular, but a whole raft of personal issues, career ambitions and sheer exhaustion as well. Wiedlin first left in 1984, just three years after the group's big breakthrough, and each member of the band is candid about the numerous reunions and "horrible" disputes they've had over the years. But the members also acknowledge their irresistible alchemy, the kind that keeps bringing them back together.

For most of "The Go-Go's," the core members of the band are presented individually, reflecting on their history from their separate perspectives. But late in the film, we see them together in their more recent collaborations, including a Broadway musical. They talk frankly about recovery and mental health. They stand together as one of the most successful bands of the 20th century. A group of women whose place is unparalleled in music history. And then they perform a new song together, in their greying hair and reading glasses. "You ready to go loud?" Kathy Valentine asks as they start to play. "Yeah, man," answers Wiedlin. "Go loud."