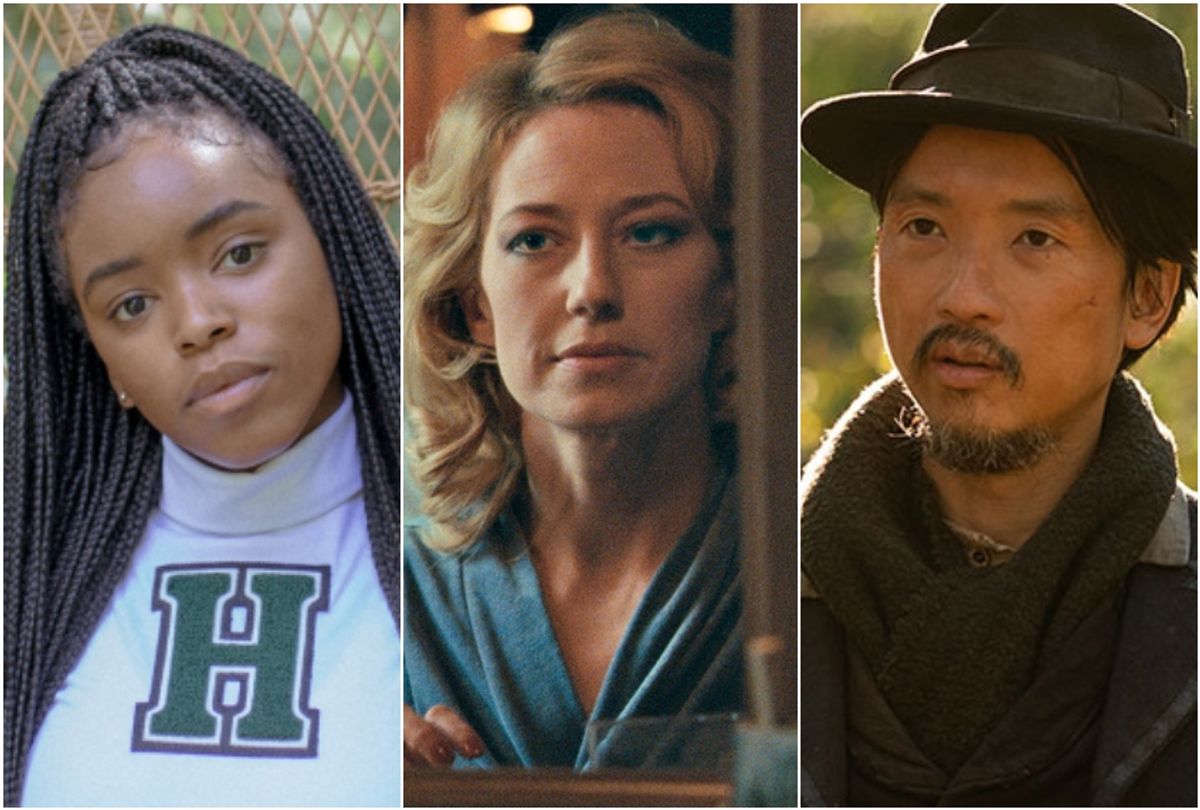 Given the universal shift to home viewing during the pandemic this year, there were almost too many films to see via all of the digital platforms and streaming options. Many of the best films were lower profile and featured performances that largely flew under the radar. Here are six great performances from 2020 that deserve a look.

Rob Morgan in "Bull" (Available on DVD and VOD)

As Abe Turner, a bull rider in the sunset of his career, Rob Morgan gives arguably the year's most soulful performance. Abe is a man who is physically and mentally broken, and Morgan makes you feel all his pain — especially when he hits bottom, being demoted to working as second fiddle to a rodeo clown. "I ain't no clown," he insists, trying to keep a shred of dignity. But as he sneaks sips of whiskey — in addition to the painkillers he takes to numb himself — Abe's suffering is palpable. Late in the film, he stares down a (possibly imaginary) bull. His power and his weariness in this moment speak volumes about Abe's life, and Morgan is at his most downtrodden and most heartbreaking.

Carrie Coon in "The Nest" (Available on VOD)

Sean Durkin's suffocating drama, "The Nest," is a magnificent showcase for Carrie Coon's ("The Leftovers," "Fargo") unflinching performance as Allison O'Hara, the long-suffering American wife of supercilious British businessman Rory (Jude Law). Coon is coolly resigned as she endures moving to England with a man she soon does not love or trust. Putting on a brave face and quietly seething for most of the film, Allison occasionally takes control, such as at a dinner with her husband where she orders an expensive meal and embarrasses him — especially when she samples the wine by drinking right from the bottle. Such impulsive moments are why Coon's portrayal is so delicious. But it is when she finally punctures things at an important business dinner that Allison shows her mettle. No longer stifled, she gives the coat check girl her fur, walks off and finds a bar where she drinks and dances, finally liberated. It may be her first taste of freedom in the entire film, and Coon makes viewers feel its rush, even as she sinks further into despair.

Orion Lee in "First Cow" (Available on Blu-Ray and VOD)

Kelly Reichardt's unhurried gem about male friendship in the 1800s benefits from Orion Lee's finely calibrated turn as King Lu, a man who is first seen naked and hiding in the woods by Cookie (John Magaro). King Lu is vulnerable here, but Lee projects such confidence as he explains that he is Chinese, not Indian, and on the run from Russians, that he secures Cookie's trust. He becomes more ingratiating after the men reunite a while later, and King Lu dreams about the value of beaver oil, wanting a farm to grow nuts, and needing capital to start a business. Stating how he "believes different things in different places," King Lu reveals himself as a seductive shapeshifter who adapts to his environment but is always aware of which way the wind blows. Lee's internal performance — watch him as he sizes up the various fools he encounters — is as irresistible as the oily cakes Cooke and King Lu sell in their community using milk they steal from a landowner's cow.

Sierra McCormick in "The Vast of Night" (Amazon Prime Video)

This sleeper sci-fi mystery features a fantastic performance by Sierra McCormick as Faye, a teenage telephone operator who is friendly with Everett (Jake Horowitz), a local DJ in Cayuga, New Mexico, circa 1950. As they walk to their jobs one night (a fabulous tracking shot), the loquacious Faye recounts popular magazine articles about radio-controlled cars, vacuum tube transportation, and cell phones in an effort to "razz Everett's berries." Her enthusiasm is infectious. This leads into her key scene, a 10-minutes switchboard sequence where she speaks far less. As a strange sound comes in over the telephone line and radio, Faye expresses her concern with a furrowed brow and quizzical looks behind her cat's eye glasses. It is in this dazzling set piece that, McCormick, reminiscent of a young Sissy Spacek, is as awe-inspiring as Faye is awestruck.

More folks saw Luca Marinelli as half of a gay couple in Netflix's sci-fi action flick "The Old Guard" this year, but the attractive Italian actor also gave one of the year's best performances in "Martin Eden," a sumptuous adaptation of the Jack London novel. As the title character, a poor, uneducated laborer who falls in love for the wealthy Elena (Jessica Cressy), Marinelli is absolutely magnetic. In a scene where he confesses his dream to become a writer to her, his anxiety and excitement are palpable. His eyes search Elena's for approval, which is not entirely forthcoming. Martin, however, is as realistic as he is determined, and applies to get educated only to be told that he is lacking in basic knowledge. He is, of course, dejected, but as he grapples with being denied an opportunity, he becomes more resolute. Marinelli communicates Martin's fortitude with grace as he resiliently bootstraps to achieve his dream. It is impossible not to root for him to succeed.

Lovie Simone in "Selah and the Spades" (Amazon Prime Video)

Lovie Simone is exceptional as the calculated, controlling Selah, leader of the underground faction, the Spades, in this juicy tale of backbiting teenagers at an exclusive private school. However, she has one weakness: her formidable mother Maybelle (Gina Torres). Selah's mom is a woman who instills the kind of fear in her that Selah instills in her classmates. When Selah returns home one day, the camera deliberately does not show her face. As she enters the house s-l-o-w-l-y, running her hand along a hall table, this is a teenager about to be rebuked. When Maybelle casts a withering look at her disappointing daughter, Selah bows her head, shamefully. Simone has very few lines in this pivotal scene; it is all her silently reacting to her mother telling her that Selah needs to be "put in her place" and "saved from herself." Selah may act contrite, but this lecture disputedly empowers her, and Simone's hypnotic performance shows how Selah both embraces — and cracks — under the pressure she internalizes. Simone's performance, however, is flawless.