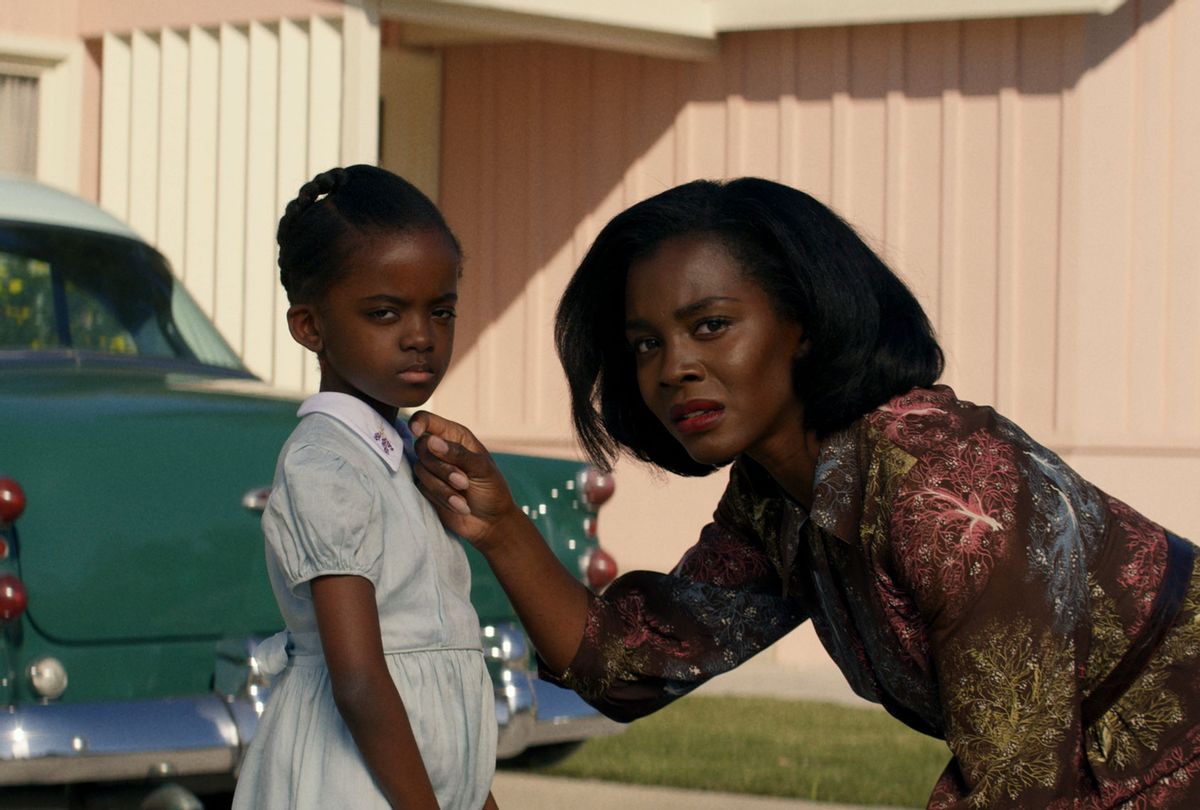 The house I grew up in was a midcentury wonder unique enough to be featured in House Beautiful. My mother proudly featured that issue on our coffee table in the seating well where she entertained guests, making sure we didn't toss it out whenever we refreshed the other magazines fanned across its polished wooden surface.

It was the only periodical granted pride of place that wasn't Ebony, Essence, Black Enterprise or Jet, and strictly it was an evidentiary detail in a wild tale. My parents were able to purchase this architectural masterwork in the mid-1960s because the white couple who custom-ordered every detail were quite literally spooked into selling the place shortly after the last coat of paint dried.

As the legend goes, someone saw a Black woman pushing her baby in a carriage down their street, and there went the neighborhood. More accurately there went the white people, including the couple who built their House Beautiful dream home only to abandon it in the mania of white flight. What a tragedy. What idiots.

Fear makes people reckless and stupid, and people like us, the cause the fear, could only shrug and get on with our lives. The larger economic effects this racist exodus had on our area would be tangible in the 1970s and '80s as money for public schools and other services followed the white people out to the suburbs.

Even in the face of that, my mother recalled some scenes from this time with a comedian's gusto. One of her favorite involved a realtor cold calling and urging my mother to sell the home she'd just moved into as soon as possible, warning that the neighborhood's property value was only going to plummet. "They" were moving in and taking over, he said, and to this my mother gleefully responded with some version of, "I told him, 'They' are already here!' And I hung up."

"Them," Amazon's new horror anthology series beginning with this season's "Covenant," contains an analogous exchange in its finale, only the circumstances are as far from comedic as can be. The line is delivered an angry coup de grace in a 10-day war white bigoted neighbors wage upon the Emorys, a Black family recently arrived from the South.

Livia "Lucky" Emory (Deborah Ayorinde) and her husband Henry (Ashley Thomas)  simply want the same verdant lawn and quiet life for themselves and their daughters Grace Jean (Melody Hurd) and Ruby Lee (Shahadi Wright Joseph) that everyone else is enjoying. But their new neighbors never give them a moment's peace.

This being a horror series, subtle antagonism doesn't cut it, but the attack strategies are entirely believable if you've survived something like this, or if you watched "Lovecraft Country." (Its third episode "Holy Ghost" mined similar territory.) First come the stares, the cold refusal to return friendly waves, the heinous perkiness of the neighborhood queen bee Betty Wendell (a bone-chilling Alison Pill). 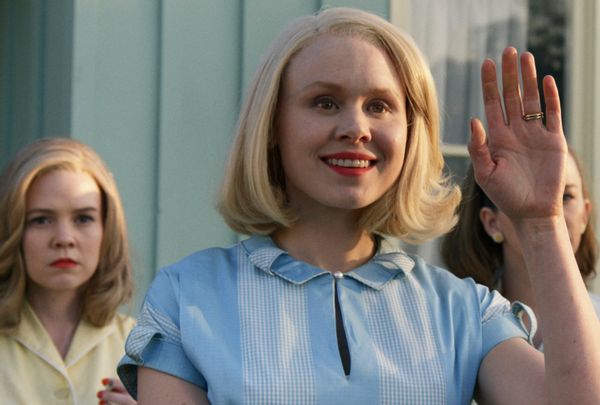 Alison Pill in "Them" (Amazon)

Then comes various all-too-familiar escalations – the women in the neighborhood lining up in front of the house and blaring an assaultive cacophony of radio noise, the racist effigies strewn outside their front door and far, far worse.

As one would expect, the police refuse to help the Emorys, emboldening those with the least restraint – including the supernatural forces lurking with the walls of their new home.

It shouldn't shock or spoil you to know that "Them" doesn't end cleanly for anybody – not for the family, not for the neighborhood and not for the viewer. I appreciated the crisp visuals and the stylistic homage to the midcentury thriller; at one point I mused that this is what "Saw" would look like with Stanley Kubrick or Robert Aldrich directing it. Thomas, Hurd, Joseph and Ayorinde – especially Ayorinde, who morphs into a desperately haunted woman before our eyes – are excellent performers who tap deeply in the viewer's well of empathy.

For all of these reasons, by the time "Them" was over, the 10-episode series had wrung me dry of any notion beyond simply wanting to be done with it, which is an odd place for a technically solid, artistically bold, and believably acted show to leave a viewer.

Whether you feel that way depends on how many kernels of truth and reality you recognize or acknowledge beneath the tale's gory, hideous surface, and more explicitly, how many of them you have witnessed or experienced.

Such fatigue is produced by decade of Hollywood equating the Black experience with slavery stories; Black heroism with a high tolerance of insult and beatings and beatifying Black exceptionalism by way of white hero narratives. Take in years and years of people who look like you being presented as instruments – objects – as opposed to fully realized individuals with quirks, and loves and faults, and you'd be bone-tired too.

But this partly discounts the reality that the entertainment industry's gatekeepers have only recently broadened their financial support and promotion for movies and TV shows centered around non-white protagonists who aren't superheroes or extraordinary professionals or historic figures or a comic's alter-ego.

Heartened by the hard-won success and growing influence of folks like Ava DuVernay, Issa Rae, Jordan Peele and Marsai Martin, who has a firm "no Black pain" rule for every project she produces and stars in, we cry out for stories made by and about people of color.

Here is one executive produced by Lena Waithe and created by Little Marvin, who also serves as its showrunner.

We want to see projects that present non-white Americans in stories we haven't seen a million times, that aren't bound in some way to slavery, criminality and poverty; here is a fiction inspired by the Great Migration, a part of American history that reshaped the social structure of every major city in every region.

Here, too, is a plot that denudes the lie of white culture's alleged celebration of the pioneer spirit and set in Compton, California, a place long associated with Los Angeles' Black working class. "Them" depicts a 1953 version of Compton that might as well be lifted out of "Leave It to Beaver."

The Emorys' move from Chatham County, North Carolina to California is presented as running to a sunny new beginning and from a place poisoned by terrible memories. Lucky has endured an explicit trauma, as has Henry, a World War II veteran.

Their problems only compound from the moment they arrive, as do those of the show's, but not for the typical reasons.

Some of the revulsion "Them" produces may be related to its veracity. Separately each character confronts situations any non-white person who infiltrates spaces long closed to them will recognize, aside from the naked insults. There are the backhanded compliments ("You've got a pretty face for a Black girl"); the denigrating comments masked as praise; the appalling, racist imagery dressed up in a major key and passed off as nursery rhymes.

People of color learn early to recognize these affronts and figure out a way to swallow their anger in the moment or find a way to redirect the fire of their rage in a direction that doesn't harm anyone else or hopefully, maybe themselves. In this show, though, there is no such thing as coded speech and forbearance, and there are no microaggressions, only full-blown hostility.

Lucky's anger leaps out of her at regular intervals; Henry externalizes the psychological demons eating him alive where he can, and all of this happens apart and is exacerbated by the constant harassment by their white neighbors who find a way to make barbarous acts of racism a full-time job.

But isn't trauma part and parcel of the horror experience? Certainly. Most successful horror movies also mitigate its impact by constructing a barrier of the impossible between our real and the dark fantasy within the story. This is true of the greatest horror stories that also comment on racism in America. George A. Romero's "Night of the Living Dead" and Jordan Peele's "Get Out" both place Black protagonists in situations where they are outnumbered and surrounded, but in Romero's film zombies are the central evil; in "Get Out" a white family's preternatural and nefarious secret terrorizes the unsuspecting hero.

Both of these threats are obviously fantastical while, in contrast, the extreme violence in "Them" is entirely familiar and possible. Variations of the indignities the Emorys endure have been filmed and circulate in viral videos. We read about such in alarming news stories about white people pulling guns pulled on Black folks as they're going about their business or in reports about white mass shooters hunting Asian and Hispanic people, spurred on they their fear of otherness.

As I write this the nation is watching Derek Chauvin's trial and listening as witnesses describe in various ways what it was like to watch this cop crush the life out of George Floyd as they looked on, utterly helpless.

All of this happened, all of this is happening, and "Them" arrives in its wake as intentionally rendered work of fiction that doesn't necessarily offer a place to escape to or from these daily accounts of torture. The adrenaline spikes it produces are not fleeting and may be accompanied by a nasty cortisol chaser that catches in your throat. Of course, one's reaction all in how you look at the story and whether you recognize enough of it to be real or true enough.

Some people are going to love "Them" and some may be content to acknowledge its visceral potency while desiring to never watch it again. It may traumatize, and that doesn't make it bad or unworthy of your attention. Think of it as a provocation. Then decide if you have the stomach to be provoked, yet again.