In "Wrath of Man," Jason Statham shoots his way through an overblown, yet fun revenge thriller 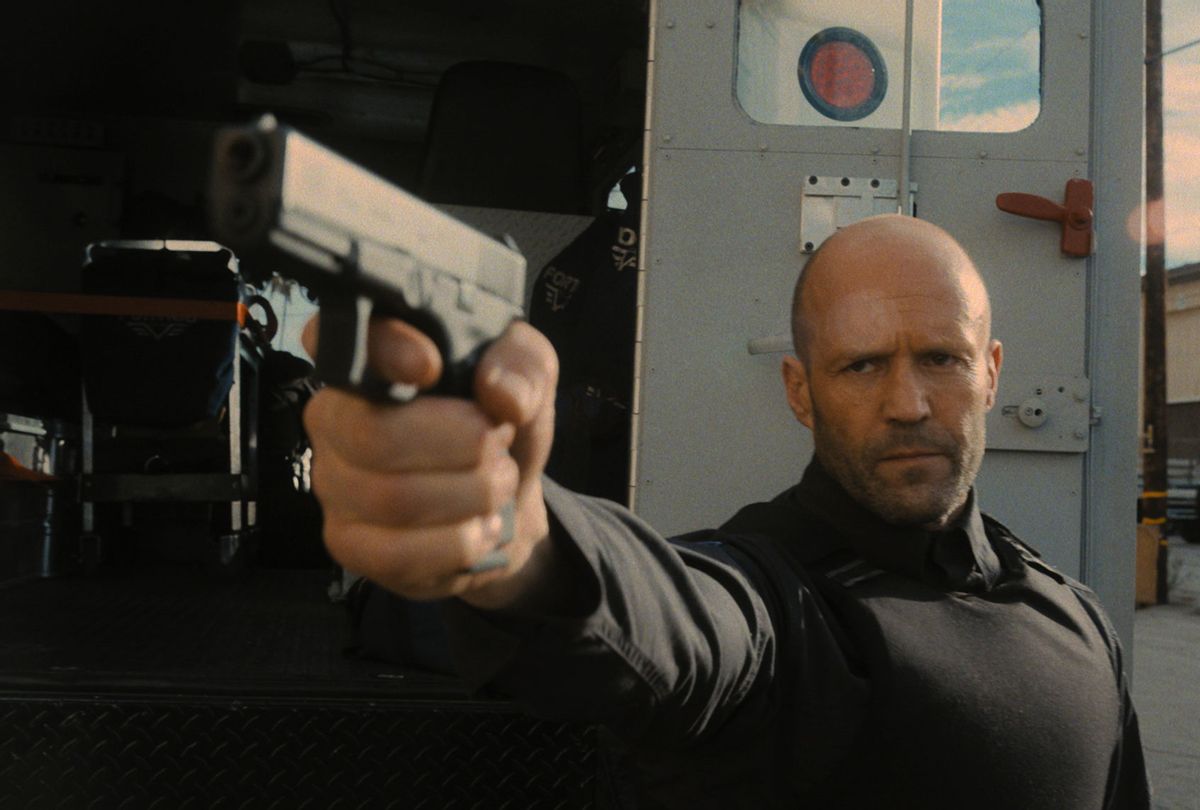 Maybe all one needs to know about "Wrath of Man," the new Guy Ritchie film is that Jason Statham shoots his way through it with "unambiguous precision." This enjoyable action heist film is tough and, like Statham, gets the job done. Alas, if only it was as tight-lipped as Statham; Ritchie still insists on larding his film with excruciating macho swagger dialogue. An early locker room scene features so much talk about cocks one might expect the guys to start measuring themselves. (Alas, this is not a Paul Verhoeven film).

A remake of the 2004 French film "Le Convoyeur" (aka "Cash Truck"), "Wrath of Man" opens with a Fortico armored truck being stopped and robbed. The two employees are killed as is a civilian who was in the wrong place at the wrong time.

Enter Patrick Hill (Statham), who is hired by Fortico and quickly nicknamed "H" (as is H-bomb, or Jesus H. Christ) by Bullet (Holt McCallany in what might be called the Gerard Butler role). H undergoes the fitness training and target shooting, scoring a passable 70%, which is enough to get hired. He goes out on his first job, picking up cash with Boy Sweat Dave (Josh Hartnett), and everything goes smoothly. Then, on his next job, H's truck gets jacked, and without a dollar disappearing, he efficiently and effectively kills all the robbers. Not only does H not get a scratch, he barely breaks a sweat. While he's offered desk duty to deal with his possible PTSD, H says hell no to that and goes right back to work.

This bravura posturing causes some folks at Fortico to wonder aloud about this dark horse who seems overqualified (70% test score?) and must have "a history." Is something else at play here? It is hard not to shout at the screen: Of course, there is! It's Jason Statham. He's made an entire career out of playing cool cucumbers who have a secret vengeful agenda! Besides, the film is called "Wrath of Man!"

So yes, that secret vengeful agenda comes to light in the second act of the film, which jumps back in time five months and reveals H's "history" that includes the robbery that opens the film and shows who the civilian killed was, and why Statham is a man of wrath.

Ritchie's film may spend a little too much time fleshing out the details here. There are several scenes that involve H's prior associates, which include Mike (Darrel D'Silva) and Moggy (Babs Olusanmokun), who are charged with tracking down the men who robbed the truck that caused the civilian's death. A scene where H oversees the torture of Jerome (Thomas Dominique) borders on the excessive. It also feels like a red herring, which can also be said about an earlier scene featuring Agent King (Andy Garcia), a man who knows who Statham is, but allows him to go about his business.

Ritchie overly convolutes "Wrath of Man" during this mid-section and the third act, which introduces a crew of bored ex-soldiers, whose leader, Jackson (Jeffrey Donovan) has masterminded a plan to rob armored trucks. (Cue the opening robbery repeated a third time, now from the perspective of the criminals). Jackson's crew includes Sam (Raúl Castillo), Carlos (Laz Alonso), Tom (Chris Reilly) and Jan (Scott Eastwood), among others, and, most importantly, they rely on an inside man who works at Fortico. Viewers only know that the coconspirator is not H.

As the plots converge in the film's epic and violent fourth act, "Wrath of Man" commands attention. There is an intense shootout where hundreds of bullets fly fast and furiously. Although this lengthy set piece could have been edited a bit more smoothly, it is pretty clear who dies, who gets double crossed, and who survives. This film is not just about serving an ice-cold heaping of revenge, it is a bag of money flick where there is no honor among thieves.

Even when viewers can see where the film is going — and there are surprisingly few surprises — "Wrath of Man" remains entertaining because Ritchie does not seem to be trying too hard or overcompensating (except in the aforementioned locker room scene).

Statham is fun to watch as he gets intel on his Fortico coworkers, hoping to figure out some connection to the tragic event at the robbery. He is particularly ruthless questioning Dana (Niamh Algar) the team's sole female member, and this scene shows Statham at his most unflappable. The actor and his deadpan delivery are why "Wrath of Man" succeeds.

The large, multicultural supporting cast, which also includes Eddie Marsan, Jason Wong, and Rob Delaney, is, however, largely undistinguished. That is actually a compliment, because this film is hardly an actors showcase; the characters are not especially defined or developed. The film's showiest turn, by Scott Eastwood, stands out because it is both broad and smug. Eastwood should underplay, like Statham, or his father.

It may be damning with faint praise to say "Wrath of Man" is one of Ritchie's better efforts, but it is. The filmmaker resists his typical flourishes and tendency to be gimmicky. There is none of the too clever by half schtick of "The Gentlemen," or the silliness of "Sherlock Holmes," or the louche panache of the horrible but stylish "The Man from U.N.C.L. E." Moreover, with this film, Ritchie has finally redeemed himself for "Revolver," the terrible 2005 Statham vehicle he helmed.

"Wrath of Man" opens in theaters on Friday, May 7.