In the tension-filled "Profile," a journalist goes catfishing online to get recruited by ISIS

In this compelling new film, an undercover reporter takes a risk to investigate how women are recruited by ISIS 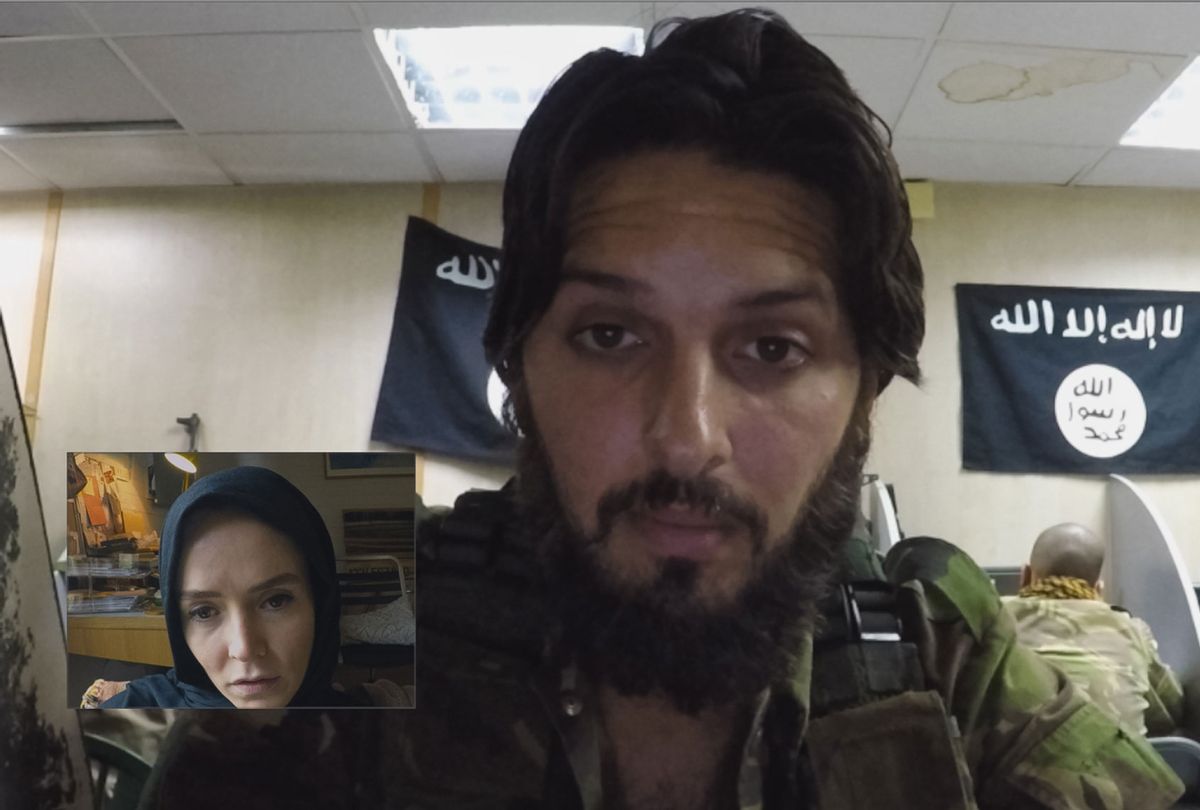 Why do young European women join ISIS, and how are they being recruited through social media? This is the clickbait topic behind "Profile," a 2018 thriller that is getting a theatrical release now. (Given that the film unfolds entirely on a computer screen, it can also be watched on a laptop by anyone who does not suffer from screen fatigue.)

Amy (Valene Kane) is an undercover reporter for Vick (Christine Adams). She creates a fake social media profile as Melody Nelson to "befriend" a Jihadist and learn (and report on) how terrorists seduce women online in weeks, encouraging them to marry, and come to Syria where they are likely to end up as sex slaves, suicide bombers, or be killed trying to escape.

It is a compelling topic, and "Profile" is engaging as Amy types and retypes information and messages, downloads images to upload on her account, and watches videos to learn how to make herself look younger, "become" Muslim, and wear a hijab. She also researches details about conversion, finding stories by young women who have joined ISIS, to make her fictional narrative believable.

And it is hard not to appreciate the details of all the texts, articles, and videos that must have gone into making this film. Director Timur Bekmambetov ("Wanted") creates a very busy screen for viewers. (He produced two other 2018 films that are shot entirely "online" — "Searching," which starred John Cho, and the horror flick "Unfriended: Dark Web.") But he keeps the action nimble as Amy makes notes, records and edits calls and videos, and even pauses to chat with her boyfriend, Matt (Morgan Watkins), or her sister Kathy (Emma Cater). However, viewers must suspend their disbelief that Amy's Wi-fi never goes down, she never forgets to record something, and never has any technical issues whatsoever.

After sharing a video on social media, Amy, well, Melody, is contacted by Abu Bilel Al-Britani (Shazad Latif in a thankless role), who wants to Skype with her. Vick sets Amy up with Lou Karim (Amis Rahimzadeh), a colleague who can help her record the call, but Amy is concerned that Lou, who is Muslim, may blow her cover. Instead, he is useful, advising Amy not to look Bilel in the eyes. As Melody and Bilel chat, a game of seduction begins. Amy is hoping Bilel will reveal his recruitment process, and Bilel is hoping to get Melody to become his wife. Is someone being catfished here?

"Profile" strings viewers along until the final frame. But it's almost a spoiler to reveal that Bekmambetov, who co-wrote the script with Brittany Poulton and Olga Kharina), adapted Anna Érelle's 2015 memoir, "In the Skin of a Jihadist," which recounts the true story that inspired this film. Nevertheless, there is considerable tension as Amy tries to keep her identity as Melody compartmentalized. Viewers may worry that she will reveal her ruse accidentally as she shares her screen with Bilal or shifts in and out of character between Skype sessions. Meanwhile, Matt, Kathy, and Vick are all concerned that Amy is going too deep into her role. The danger mounts as she is pressured by Bilel to wed him online over Skype and come to Syria via Amsterdam.

Valene Kane is marvelous to watch as Amy juggles paying her overdue rent, assuring Vick she has a story, and managing her boyfriend's needs (or not). But her high wire act as Melody is slightly less successful. While her fictional persona is meant to be pliable, her connection with Bilal never quite convinces. He may be "charming," cooking with her over Skype, promising her everything she desires (including a Kalashnikov!), but the suggestion that Amy is losing focus and falling for Bilal is unpersuasive. There should be some real ambiguity here — is Bilal for real, naïve, or devious? Latif's performance does not invite such complexity. Even when he reveals some personal details that intrigue Amy/Melody, he fails to entice. As Amy loses sight of things, and considers revealing her true identity to Bilal, audiences may have a disconnect. This crucial episode may come off as facile and contrived.

What is more, "Profile" also only scratches the murky ethics of the situations it presents. Because the "seduction" is so fast, and Amy is so determined (and deadline-driven), the bigger picture issues feel glossed over. More attention should have been paid to the loneliness and lack of belonging that young women (and young men) experience that lead them to join extremist groups, cults, Neo-Nazis, and other similar insidious organizations. Likewise, when Amy asks Bilal about online reports that recount sex slavery rings or suicide bombing, their conversations seem superficial. Given how strong the film's setup is, one wishes it had explored these topics deeper to sustain the dramatic tension through the characters' "courtship" and conversations.

However, this underdeveloped midsection does lead to an absorbing finale where Amy encounters some real danger. "Profile" may be manipulative, but it does create a thrill-ride vibe for viewers who fall under the film's spell.

"Profile" opens in theaters on Friday, May 14.