"In the Heights" reclaims Latina beauty and honors its roots

Screenwriter Quiara Alegría Hudes spoke to Salon about, well, the salon & the importance of transformation for Nina 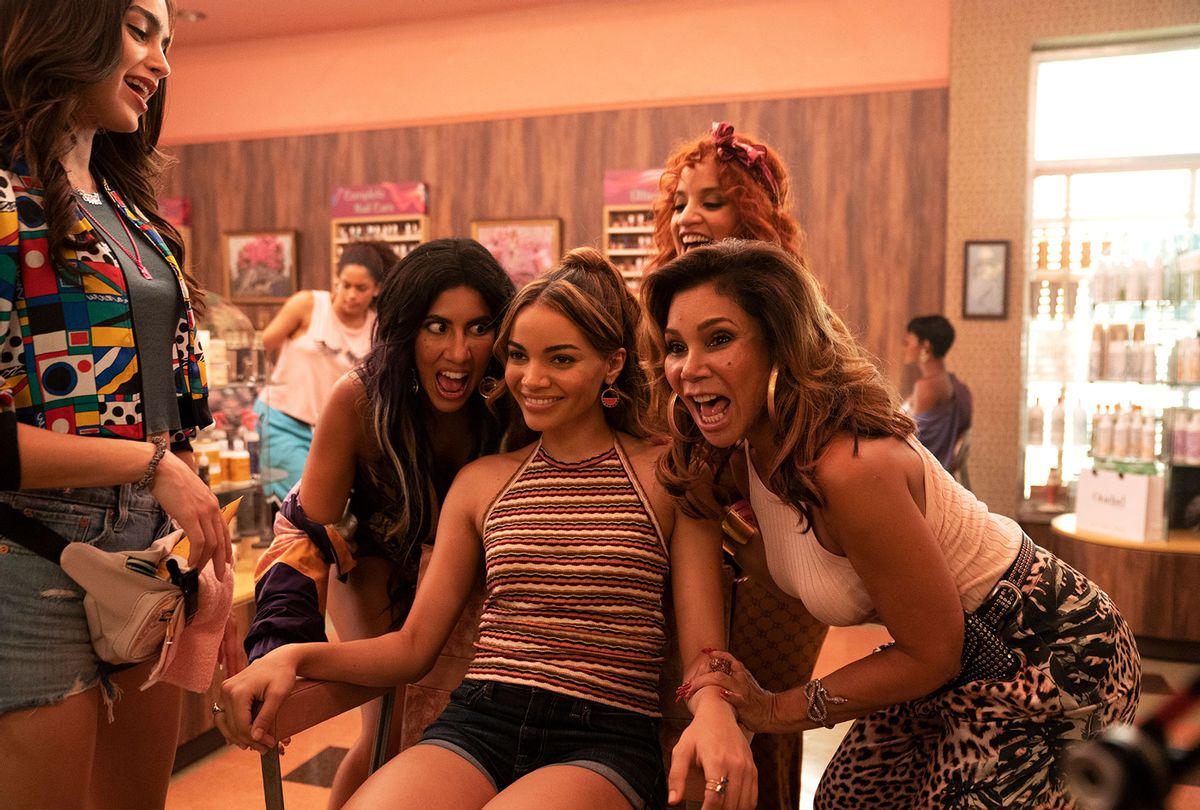 It's not every day one can get a haircut, manicure and rousing speech about overcoming imperialism in one place, but that's precisely what "In the Heights" offers at its salon.

Run by Daniela (Daphne Rubin-Vega) and her partner Carla (Stephanie Beatriz of "Brooklyn Nine-Nine"), the Washington Heights salon has been serving locals for over a decade, providing makeovers of the "skin-deep kind and emotional kind." Now that the threat of gentrification has become a reality, the salon has been priced out, and it's time to pack up and move. Daniela's clientele, however, are reluctant to follow her all the way out to the Bronx – and after hearing one more excuse, she loses her temper.

"Our people survived slave ships! We survived Taíno genocide! We survived conquistadores and dictators! You're telling me we can't survive the D Train to the Grand Concourse?!"

The speech shuts everyone up immediately. Having one's privilege pointed out can do that, but it's not shame that Daniela wants to foster but pride. The people hailing from the Caribbean islands who predominantly live in Washington Heights have been subject to imperialism twice over: first in their homeland and now in America. It's this layered sense of identity that often comes down to West African heritage and the Indigenous Taíno of the Caribbean and South America, whom Daniela references.

"To be honest, the salon was the area I was the most nervous about the translation to film," Quiara Alegría Hudes told Salon on a Zoom interview. The Pulitzer Prize-winning playwright wrote the book for the Broadway musical, based on an original concept by Lin-Manuel Miranda, and also adapted and produced it for the screen.

"Lin and I have been trying to get this movie made for a long time. It had been through a few Hollywood studios, and I could just feel this gravitational pull happening with the salon coming from executives," she said. "It was basically like, if I didn't really take charge, the salon ladies were gonna end up very like buxom and voluptuous, all wearing skin-tight mini dresses in four-inch stiletto heels, which is a real bastardization of reality."

Authentic portrayals are essential to interrogating the themes of identity that play a central part of "In the Heights" – for its characters and its creators. It's also why outlets like The Root have criticized the lack of dark-skinned Afro-Latinx characters in the main cast. And while Miranda apologized for the colorism in casting and vowed to do better, there's still overwhelming support and goodwill for the film's love letter to the majority Latinx neighborhood. goodwill for the film's

The film's inclusion, albeit imperfect, captures a group of people onscreen in a way that's never been seen before, especially in the summer movie market of crowd pleasers and blockbusters. Inclusion onscreen boils down to inclusion at the highest levels offscreen, and frankly, Hollywood is still failing its Latinx filmmakers.

The ladies of the salon 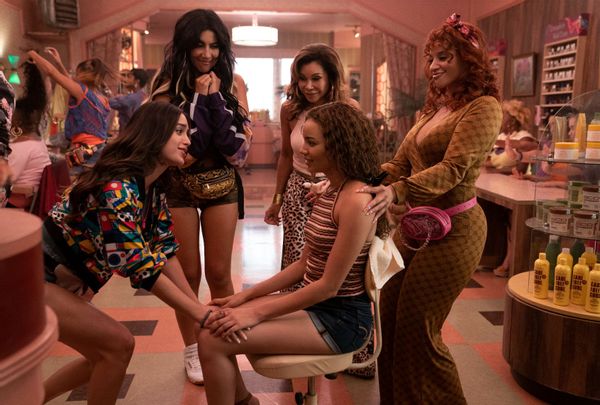 As a producer on the film, Hudes wanted to have a say in how specific spaces, especially those dominated by women, looked.

"I just went got my hair cut in Washington Heights yesterday, from a local Dominican salon called Miss Rizos," she said. "They're wearing clothes that move easily that are comfortable, and they're wearing tennis shoes because these are working women on their feet eight, nine hours a day.

"They're not all hourglass figures. They have different body types. It's a much more grounded and honestly interesting approach to beauty than I think is in the popular imagination about what Latina beauty looks like. So that was where I said, 'Can I approve every single costume that's in the salon? I just don't want it to become a male fantasy of what Latina beauty is.'"

Also working at the salon with Daniela and Carla are budding fashion designer Vanessa (Melissa Barrera of "Vida") and bombshell Cuca ("Orange Is the New Black" star Dascha Polanco). The scene were Daniela lectures her customers transitions into a tight, choreographed set piece when the neighborhood's prodigal daughter Nina Rosario (Leslie Grace) returns from a semester at Stanford.

"When we cast this extras for the salon, I was like, we need to make sure there's elders in there too. It's not just all 30-somethings. No, these are real spaces where people in the community go," said Hudes. "I wanted to make sure it was a queer-friendly space. There's a little boy in the salon too, because honestly, we don't all have childcare. The kids come to the salons too and they have to hang out, so that was one detail that was really important to me to retain, to stay grounded and connected to reality."

As Nina is getting pampered, the women begin to gossip, leading to the song "No Me Diga." Choreographer Christopher Scott developed a dance in which the carts with hair products are wheeled around in synchronicity, elaborate fashion nails click and clack ("It's utterly divine," Hudes enthuses), and the employees and clients bend and spin as they avoid obstacles.

Set decorator Andrew Baseman noted how the dance required putting the carts on casters and gluing down anything that could fall. But it was the massive amounts of beauty products that took the most research.

"The most important thing was getting the hair product right, to get the specific brands and types of things for that specific kind of hair," he said in a phone interview. "My assistant Ashley [Wellbrock] found some salons that we could go to and pick their brains and did research. We imported some of it and we bought some from the shop that we did research at and also were able to order some wholesale. And nail polish – you know there's hundreds of bottles of nail polish." 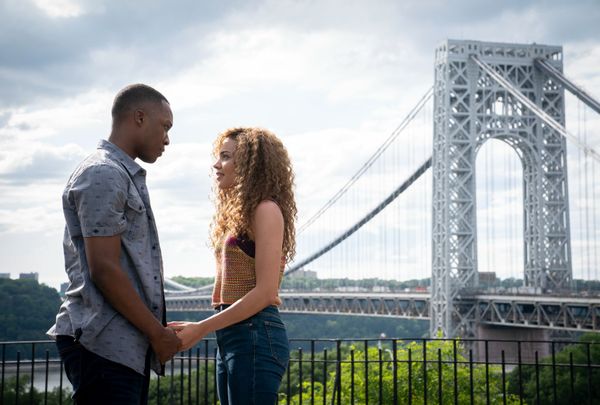 Corey Hawkins and Leslie Grace in "In the Heights" (Warner Bros.)

Actress and singer Leslie Grace, who is an Afro-Latina of Dominican ancestry, is the daughter of a salon owner, and therefore knows the importance of having just the right hair products to nurture her naturally curly hair. In the film, her Puerto Rican character's hair goes on its own journey. When Nina returns home, she has straight hair to reflect how she tried to fit in on the West Coast at school. But after the salon, she emerges with a full, beautiful head of curls.

"Our hair designer actually storyboarded Nina's hair beginning to end in the movie," said Hudes. "Nina comes back from Stanford with ironed hair. As she spends a little time on the block and then goes to the salon, she returns to kind of her natural haircare routine, which is which is curly and braids."

For some people, it may just seem like hair, but as the neighborhood's matriarch Abuela Claudia notes in a conversation with Nina, it's "little details that tell the world we are not invisible."

Hudes takes that sentiment to heart, focusing on a detail so small that most people probably wouldn't notice. Just as Nina's hair is visual act of decolonization of Latina beauty, insisting on one specific word represented the decolonization of language and identity for Hudes.

"It's a tiny little example," Hudes admits. "I didn't write the subtitles, but they sent them to me for approval. Jimmy Smits as Kevin Rosario has this line in that very emotional scene with his daughter, in which she has a change of heart and expresses to her dad what she has realized about life. He holds her head in his hands gently and tenderly and he says, 'Tú  eres boricua.'

"The subtitle for that line was, 'You are Puerto Rican,' and I was like, Okay, I'm gonna get in trouble because this is me being really picky and controlling, but actually, the translation of 'Tú  eres boricua,' is not 'You are Puerto Rican.' Puerto Rico is a place and it's the colonial name of a place. Boricua is a people, Boricua is a culture, and it means something a little different."

This name of the people and culture goes back to the Taíno, who called the island colonized as Puerto Rico by an Indigenous name: Borikén or Boriquen. It makes sense that Kevin Rosario – and Hudes who is of Puerto Rican descent herself – would prefer to use the word "boricua" over the colonized word names, "puertorriqueña" or Puerto Rican.

"It's really, it's a claiming of something that colonization has tried to take away," said Hudes. "So I was like, let's make the subtitle, 'You are boricua.' And in that instance, if English-speaking people aren't familiar with that word, that's okay."

"In the Heights" is now in theaters and on HBO Max.