"I have devoted all of my adult life ... to pursuing this strange phantom intersection between smart and stupid" 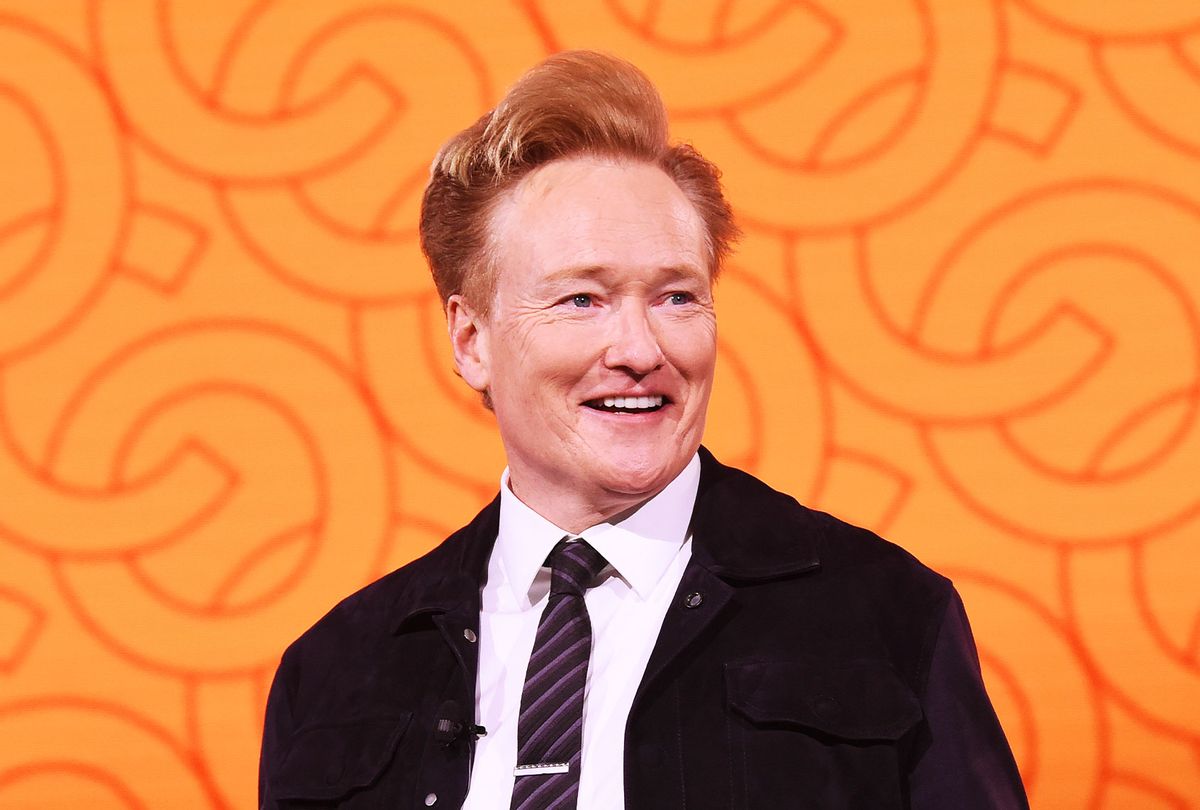 Conan O'Brien of TBS’s CONAN speaks onstage during the WarnerMedia Upfront 2019 show at The Theater at Madison Square Garden on May 15, 2019 in New York City. (Kevin Mazur/Getty Images for WarnerMedia)
--

Conan O'Brien never got the chance to legitimately compete for the King of Late Night title on an even playing field. But when it comes to signing off, few performers can compare.

At the end of the "Conan" series finale this past week O'Brien described what drives him quite simply: "I have devoted all of my adult life, all of it, to pursuing this strange phantom intersection between smart and stupid.

"There's a lot of people that believe the two cannot coexist, but God, I will tell you, it is something that I believe religiously," he continued. "I think when smart and stupid come together – it's very difficult – but if you can make it happen, I think it's the most beautiful thing in the world."

Thursday marked the end of  "Conan," O'Brien's little late-night perch that could, after an 11-year run on TBS. It also closes the book on his 28-year run as a late-night talk show host, making him the longest tenured one on TV at the time he left. This time his departure is entirely his choice, shaped by him, welcomed by his supporters. O'Brien lived it up in the final week of his modestly rated show, smoking a blunt with Seth Rogen, messing around with Jack Black and being congratulated by a slew of celebrities wishing him well.

Many tributes written about O'Brien include the obligatory career timeline: He was a writer on "The Simpsons" whom Lorne Michaels elevated out of that supposed nowhere to take over "Late Night" in 1993 after David Letterman left to launch "The Late Show" on CBS.

Then comes the reminder of his brief reign at "The Tonight Show," where he took over for Jay Leno in 2009 and wasn't even given a year to find his rhythm or his audience.

Not helping matters was the fact that Leno refused to leave despite NBC having established its transition play a full five years before it happened. First Leno negotiated another talk show that tanked. Then he straight-up swiped "The Tonight Show" from under O'Brien, yielding bushels of acrimony in doing so.

All of this is known. Many still can't forgive Leno all these year later. Less remarked upon were the protests staged in O'Brien's name which, at the time, were as diversionary as they were puzzling. One of them included a wrestling match between impersonators of the comedians, with O'Brien emerging victorious. Another show of support came by way of a stellar "Downfall" meme.

All of this ridiculousness represented smart and stupid coming together beautifully and for entirely nonsensical reasons.

Certainly NBC's treatment of O'Brien was terrible, and Leno was and remains lousy. But so goes the TV business, an industry that errs on the side of elevating mediocrity at the expense of creativity.

All of this happened in the midst of one of the worst recessions in modern history, one that hit Generation X workers the hardest.

That cohort graduated into an unstable economy and watched the nine-to-five workday be erased in front of their eyes. After working longer hours and paying their dues, the promotions they were taught to strive for either never materialized or weren't there because said positions were still being occupied by Boomers working beyond the prescribed retirement age.

The O'Brien-Leno brouhaha therefore came to symbolize that generation's rage, hence the demonstrations on behalf of a man who received a reported $45 million payout and a six-month non-compete for his trouble.

Over the years I've marveled at the average person's propensity to organize their anger around famous, wealthy people who were wronged.

Some current version of this is the #FreeBritney movement surrounding Britney Spears' demand to be released from an oppressive, exploitative conservatorship that denies Spears autonomy over her career, earnings, even her own body.

Until the New York Times Britney Spears documentary "Framing Britney Spears" aired on FX and Hulu in February, most Americans hadn't a clue of the extent to which Spears' life was not her own. The fans who have been screaming on her behalf long before that probably looked crazy.

They still might – because, again, if Spears is released from her conservatorship she should have access to the millions her father Jamie Spears is keeping from her, not to mention a higher earning potential than the vast majority of her stans.

But those of us who remember the smart-stupid Great Coco Uprising of 2010 should minimally understand that the furor isn't entirely about Spears. Indeed, as Elie Mystal explains in The Nation, her situation may and should lead to needed reformation of a flawed section of U.S. law that has needlessly ensnared a lot of everyday people.

O'Brien's bumpy road to TBS never approached that level of national import. Emotionally, however, he and Spears represent the public face of their respective generation's completely understandable private seething.

For millennials, as Tabitha Blankenbiller's explains in her Salon piece, the requests Spears made before the judge are the same as the ones they want and that have been imperiled:

…to be paid a living wage without working ourselves to death. To fall in love. To decide whether we want kids, and not worry that our livelihoods will suffer because of that choice.

These are universally accessible desires supposedly enshrined in the part of the Declaration of Independence that talks about "life, liberty and the pursuit of happiness." Not listed in that document is any advice about being ready to pivot, relaunch and define your own version success.

Then again, for the majority of working people this is a risky, indulgent attitude; and for performers who aren't white these are other people's problems. It's fair to ask whether a Black, brown, Asian or Indigenous person would have received the famous grace that Turner afforded to O'Brien after NBC pulled the plug on him.

But it's also worth pointing out that in the space between his last "Tonight Show" episode and the launch of "Conan" O'Brien personified the concept of hustling, leaping directly into the multi-city "Legally Prohibited From Being Funny on Television Tour," which was immortalized in the manic warts-and-all documentary "Conan O'Brien Can't Stop."

"Conan," in comparison, was a calm landing and a mostly apolitical refuge, which in these hyper-partisan times did it no favors. It also existed during a transitional period that saw the rest of the late-night landscape expand and be taken over – and made better – by alumni of the Jon Stewart era of "The Daily Show"  and Trevor Noah's rising generation along with former "Saturday Night Live" stars Jimmy Fallon, the current "Tonight Show" host, and Seth Meyers.

O'Brien was never in the "SNL" troupe or part of the Comedy Central club, and in the end I think that makes his transition from the linear TV grind to the next chapter of his career smoother. His post-"Conan" career currently includes continuing his podcast, "Conan O'Brien Needs a Friend," and plans to make more "Conan Without Borders" specials for TBS, thereby expanding on what may be the most successful product of his late-night show.

In a much smaller way maybe this, too, provides a small beacon for those same folks suddenly, maliciously diverted from their pathway to achieving the American dream more than a decade back.

O'Brien's departure from TV was his choice this time around, and that it's happening during another time of massive economic upheaval when millions of workers are quitting dead-end, draining jobs to seek more fulfilling work is a coincidence.

That makes him less of an avatar for a dominant sentiment than perhaps a participant in a burgeoning societal movement dubbed The Great Resignation, albeit one retiring joyfully and with a large platform. We understand he's not really like us, and yet his faithful fans would say he's with us.

In his final moments of "Conan" he speaks to our shared 2021 notion of finding meaning in what we do one more time. "My advice to anyone watching right now – and it's not easy to do . . .  but try, try and do what you love, with people you love. And if you can manage that it's the definition of heaven on Earth. I swear to God, it really is."

So good night for now, Mr. O'Brien. Thank you very much and see you soon. Because if he can't stop, then neither should we.