Occupy Wall Street set the tone: A decade later, how protests against inequality made the GOP worse

"We are the 99%!" exposed a reality Americans couldn't unsee, making Democrats better and Republicans somehow worse 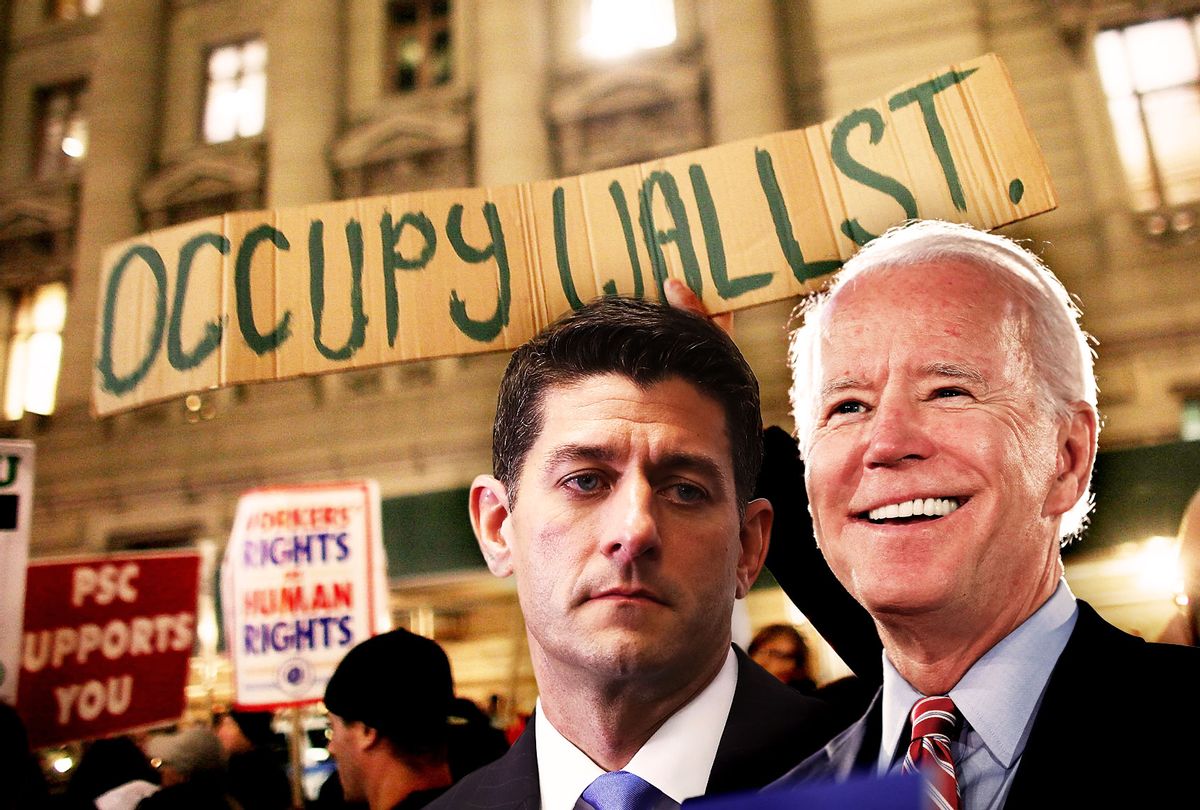 Occupy Wall Street — which started 10 years ago on Friday — has long been understood as a historical novelty, a movement that swiftly rose to national prominence and almost as swiftly sunk below the waves, destroyed by the in-fighting and mission drift that unfortunately tends to plague leftist movements. But, a decade out, it's clearer than ever that the movement had an impact far beyond its own existence.

Inspired by the Arab Spring a year before, a group of protesters started camping in Zucotti Park, which is near Wall Street and in the heart of Manhattan's Financial District, with the message: Americans can no longer tolerate escalating wealth inequalities. It started off with a few hundred people, but spread rapidly across the country, touching the lives of countless Americans. It came down to the simple slogan: "We are the 99%!"

The motto, like the movement, represented Americans who work, day in and day out, but can't seem to ever get ahead. Meanwhile, the 1% — people who make at least $422,000 a year by most recent estimates — are gobbling up an ever-bigger share of the pie. And the ultra-wealthy hoard even more. Recent estimates show that the top .1% of American families has more wealth than the bottom 90% combined. So a few rich people hoard all the cash while everyone else is forced to scrape by on increasingly mean resources.

Occupy Wall Street may be gone, but these truths that it exposed cannot be unseen.

After decades of conservative propaganda pitting the middle class against the working poor, here was the harsh reality: The reason middle-class people struggle to pay for homes or college tuition is not "welfare queens," but a billionaire class sucking up all the wealth. Republicans had spent decades slashing taxes for the rich and gutting spending on everyone else while triangulating Democrats stood by and let it happen — and in many cases, actively participated. This really was a rich vs. everyone else problem.

In a lengthy piece for the Atlantic, journalist Michael Levitin makes a persuasive case that Occupy didn't die, but was a seed that bloomed a thousand plants: The climate change strikes, the growth in the organized labor movement, and even the disorganized wage rebellion. It also framed a "populist economic message that thrust anti-corporate lawmakers such as Elizabeth Warren, Bernie Sanders, and [Alexandria] Ocasio-Cortez into the electoral spotlight."

It also, I would argue, had a profound effect on the mainstream of both major political parties.

Occupy Wall Street didn't just drag the Democrats to the left but also ruptured the traditional messaging and hierarchy of the Republican Party. It made the Democrats a better party, with a more coherent economic and social message that created a coalition between the working class and middle class. But it also destabilized the multi-decade libertarian politics of the GOP — driving out figures like former Speaker of the House Paul Ryan — and created an opportunity for white nationalists and other culture war authoritarians like Donald Trump to remake the party in their own image.

Let's start with the good news: Occupy's impact on Democratic politics isn't limited to the prominence of Warren, Sanders, and AOC. It moved the center of the party to the left, and far earlier than a lot of folks realize.

Barack Obama had mishandled the economic recovery of 2009 in many ways that had exacerbated the inequality problem. Within a month of Occupy, Obama was using the "we are the 99%" and he shaped his 2012 campaign around this economic message. (He also did better economically in his second term.) But the biggest piece of evidence for the shift is in the current president, Joe Biden. In the 90s, Biden was one of the worst Democrats in the Senate on the issues of class and economic inequality, earning him the moniker "Senator from MBNA." He spent the decade fighting tirelessly to pass a bankruptcy bill that benefited banks but ruined the lives of countless ordinary Americans. He was held off for years through the efforts of then-Harvard professor Elizabeth Warren but eventually got it done during the George W. Bush administration. That Biden is currently unrecognizable to the modern Biden, who has been laser-focused on passing two massive jobs and infrastructure bills — one literally written by Sanders — which are meant to be funded by raising taxes on the 1%. His old buddies in the banking industry are now his enemies, spending lavishly on propaganda and disinformation campaigns to derail the bills.

The shift isn't just in Biden himself, but the whole party. Centrists like Sens. Joe Manchin of West Virginia and Kyrsten Sinema of Arizona, as well as nine in the House, get an inordinate amount of media attention for their threats to derail Biden's progressive economic agenda. But that shouldn't distract from the remarkable fact that the vast majority of Democrats are fully on board with this expansive agenda that would do a great deal to shrink the wealth inequalities that plague us. That's a huge shift from 2005 when Biden got 41% of Democratic senators to back his bankruptcy bill that severely hurt the middle class to benefit the banks.

But what is just as remarkable is the shift that has happened in the GOP since the days of Occupy.

In the pre-Occupy days, things were simple for Republicans. The party was guided by the priorities of wealthy class warriors. The hoi polloi voters were brought along with deceitful arguments, leading them to believe their economic problems were due not to the rich taking all the money, but mythical "welfare queens" living high on the taxpayer dime. And the GOP base, who are motivated by racist and sexist bigotries, was ready to buy that myth. But by the 2012 election, the usual order of things was being threatened by this new, more truthful narrative about how the rich are screwing over everyone else.

Even before Occupy, Paul Ryan's 2011 State of the Union rebuttal — where he called social spending a "hammock" that "lulls able-bodied people into lives of complacency and dependency" — went over like a lead balloon. And when GOP nominee Mitt Romney was caught making a similar argument — claiming 47% of people are lazy government dependents instead of hard-working Americans — it was the nail in his 2012 campaign. This, even though Republican voters had swooned to similar rhetoric in the age of Ronald Reagan and Newt Gingrich. Nowadays, the majority of Republican voters believe the rich need to pay more in taxes. Even in red states, minimum wage hikes and the Medicaid expansion pass when they're put up on ballot initiatives.

What's happened is that the GOP base has started to decouple their priorities — which are all about culture war, white supremacy, and sexism — from this libertarian economic agenda. This is ultimately why Donald Trump has such Svengali-like powers over the base. (It certainly isn't his personal charisma, as much he'd like to think otherwise.) He gives the base what they want, which is red meat bigotry that is unfiltered through this bow tie Republican talk about "hammocks" and the "47%." Plus, Trump promised to protect Social Security and Medicare, broad social programs the base loves and depends on. He was lying, of course — his only real legislative "achievement" in office was cutting taxes for the rich — but his mere existence has created a path forward for this wing of the party, which outnumbers the richer wing by a whole lot.

Of course, most Republican leadership is still in this for the money, and the racism is just an added bonus. And to keep the masses satisfied, they've been escalating the culture war antics at a dizzying pace, amping up the authoritarian conspiracy theories, gutting reproductive rights, and bringing back the racist politics of Jim Crow. It's not that the leadership disagrees with the culture warriors on any of these issues, to be clear. But they're putting a higher priority on them than they used to, so that they can keep up their agenda of cutting taxes and slashing social spending in peace.

This shift of power is most evident in the politics of COVID-19. For extremely complicated but equally stupid reasons, the refusal to get vaccinated has become a sacrament of right-wing culture warriors, their way of showing their dedication to the cause of owning the liberals. In the past, this would not have flown with the GOP leadership, because the ongoing pandemic is a major threat to corporate profits. But even though Republicans have never been anti-vaccination before, all of a sudden they've discovered this suddenly incontrovertible "right" of right-wingers to infect whoever they wish with COVID-19. And only COVID-19. Republican support for all other vaccine mandates has not changed.

This is the first major test of what happens when culture war priorities conflict with the wealth accumulation priorities of the GOP, and, well, the culture warriors are winning. It doesn't mean that the Republican Party is going to suddenly soften on their multiple decades of support for growing the piggy banks of the rich. But it does mean they are going to get even more baroque and hateful, as they keep trying to find some kind of culture war distractions to keep the base from abandoning them over their economic policies.

Everything has tradeoffs, I suppose, and this is the bizarre one that we've faced in the decade since Occupy Wall Street: Democrats got way better, but somehow Republicans lost their goddamn minds.

That might not have been such a big deal in a better political system. The GOP is swiftly becoming a minority party, while the American population lurches left politically. In our political system, however, disproportionate representation and voter suppression gives Republicans a real shot at permanent minority rule, as long as they can keep their voters on the hook with horse paste and abortion bans.

None of that is the fault of Occupy Wall Street, to be clear. They set out with one mission in mind: Wake people up to economic inequality and get folks to start taking action to change things. On that front, they succeeded. The Democrats have power and they are trying, most of them anyway, to pass bills that directly address the concerns Occupy raised. That's a big shift in what was only a decade, especially with so many moneyed interests going against them. If America can survive the assault on democracy, we're in a great position, politically, to really address the economic problems that have plagued us for decades. That, I'm sad to say, is a very big "if."