Two comedy A-list actors provide the reason to join with this story, but Kathryn Hahn is the real revelation 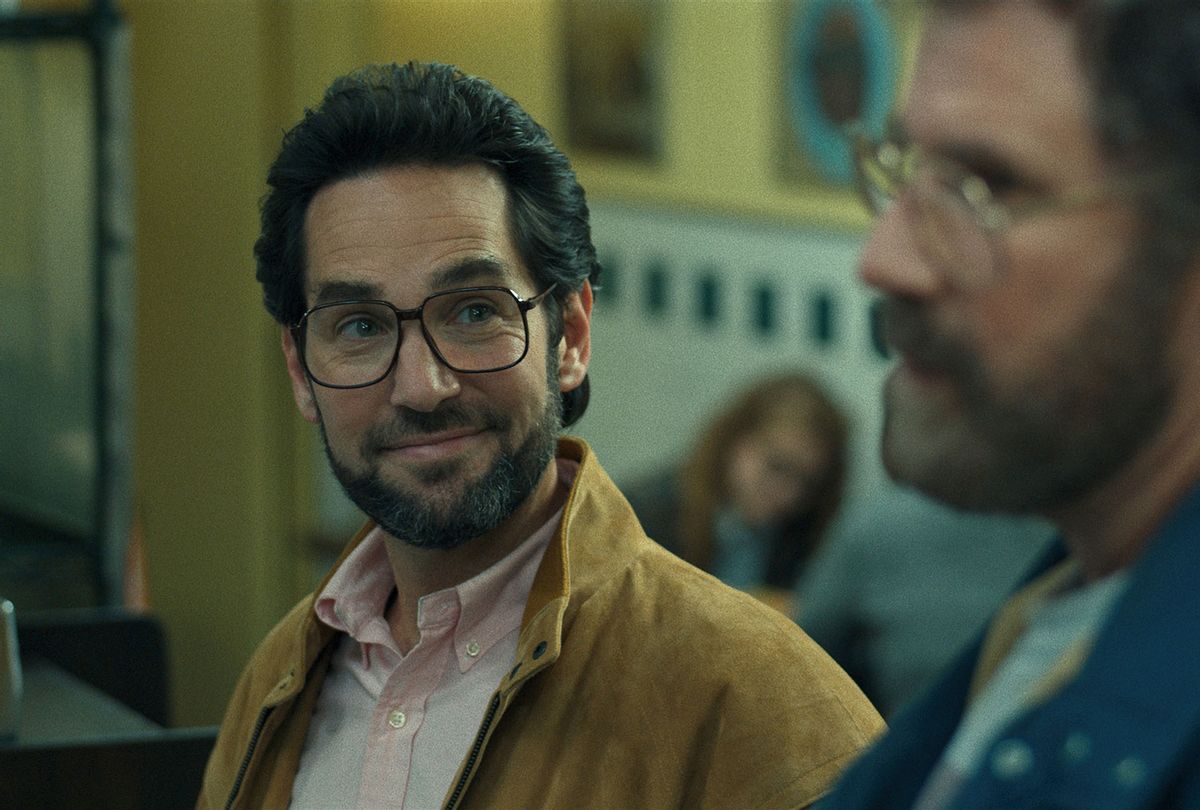 If you subscribe to the philosophy that tragedy is comedy's buttress, the casting for "The Shrink Next Door" is spot-on. That seems like an easy observation since the limited series pairs "Anchorman" co-stars Paul Rudd and Will Ferrell again alongside Kathryn Hahn, who has a significantly greater presence here compared with that movie. But honestly, even if their screen chemistry wasn't previously established, people enjoy each of these actors even if they don't always love their projects.

Rudd and Ferrell also serve as co-executive producers for this series, making it more honest to say that the two have brilliant instincts when it comes to selecting projects. In their roles as a psychiatrist and client who take doctor-patient boundary violations to bizarre extremes, they're compelling even when the script falls short.

As journalist Joe Nocera chronicles in his 2019 Wondery and Bloomberg podcast of the same name, Martin Markowitz  was to Dr. Isaac "Ike" Herschkopf what wealthy marks are to grifters. Herschkopf manipulated Markowitz into paying him $3.2 million over the course of 27 years, draining Markowitz's accounts and treating his patient's second home in the Hamptons as if he owned it.

Herschkopf took up residence in his client's psyche to such an extent that Markowitz behaved like Herschkopf's servant as opposed to his host. And Dr. Ike, as he was known, is a charismatic and especially dangerous type of confidence man because he has a medical degree.

That afforded him a level of legitimacy that eases his way into the most exclusive social circles, chronicled in his collection of celebrity photos and prideful moments he professionally framed before prominently displaying them.

Assuming the real Dr. Herschkopf is as celebrity-obsessed and narcissistic as he's written, he'll probably love the fact that he's being played by Rudd, a guy whose name typically appears next to descriptors like "handsome" and "likable" – a face, not a heel. The actor plies his reputation in a performance that weaponizes that trait.

Rudd's sympathetic comportment smooths the way to our comprehending how Herschkopf successfully preyed upon insecure people and persuaded them to heed him above all others, in the name of self-actualization and growth.

But while Rudd plays to type while twisting our expectations, Ferrell realizes Markowitz as a more woeful, tortured version of a character he's played in movies like "Get Hard." Marty, as his friends know him, is a sweet pushover hogtied by social anxiety and gastrointestinal distress when he's introduced in 1981, on the verge of turning 40.

Overwhelmed by the recent deaths of his parents and his inheritance of the family's fabric company, he leans on his protective sister Phyllis (Hahn, whose brilliance is re-affirmed here) to handle confrontations that give Marty asphyxiating panic attacks. But she can only do so much. She persuades Marty to seeking therapy with Dr. Ike based on their rabbi's recommendation.

People who know these stars but not the story may assume they're signing on to some version of "What About Bob?" That 1991 comedy classic pitted Richard Dreyfuss' psychiatrist Leo Marvin against Bill Murray's multi-phobic Bob Wiley, a hysterically fearful man who encroaches upon the self-involved doctor's vacation.

Not so with "The Shrink Next Door." Here, it's the doctor that ruins his patients' lives, cutting them off from their families and persuading them that the nightmarish circumstances he foments are necessary to manifest their best selves.

Rudd's kind smile and gentle nuggets of wisdom disguise his obsessive greed and predatory mind games. First, Ike pries Marty's self-doubt out of him – questioning, for example, his frequent minimizing of his problems with dismissive repetitions of "It's fine!"  Then he starts prying money out of Marty's wallet by extending their sessions beyond office visits into long walks, impromptu lunches and basketball games, each containing therapeutic lessons.

Soon he infiltrates Marty's workplace, then his company, and so it goes until Marty is remodeling his family's vacation home to erase all memories of the time spent there with his parents and sister in order to make it feel like the personal domain of Ike and his guilt-ridden wife Bonnie (Casey Wilson).

All of this unfolds through episodes guided by showrunner Georgia Pritchett and directed by Michael Showalter with the sensibility of a New York-based comedy that feels weirder than funny, and grows heavier as the story progresses.

"The Shrink Next Door" narrative isn't uniformly woven. The energy palpably lags in some spots, requiring the viewer to remember they're watching a true crime story that isn't a thriller. But it doesn't quite meet the level of a frog slowly boiling in a pot, either.

Rather, it's a methodically paced, odd but mesmerizing piece set to an infectious soundtrack highlighted by its strategic use of '80s soft rock hits. Besides, the cast hoists the show over and through its slack spots. Despite its imperfections, the script holds some outstanding lines, particularly when Dr. Ike drops prompts that appear as keys meant unlock progress but actually function as foreshadowing or warnings.

"Do you think the goal of life is to avoid getting hurt?" he asks Marty. "The goal of life is to live! Getting hurt is just the price of admission, my friend." Sounds very carpe diem without the context: They're in line at a local deli when Ike says this, and he is enthusiastically trying to talk Marty, his patient, into eating spicy food despite knowing it could make him ill.

Ferrell and Rudd are as pleasing to watch in this scene as they are in their best movies. Wilson's also a pleasure to watch, molding Bonnie into a reluctant accessory to Ike's vanity and deceit as she chafes against his self-serving actions. None will win any awards for their New York Jewish accents, which they slip out of as frequently as they over-emphasize. Still they are, to use a word Dr. Ike can't stand, fine.

But Hahn is the spark plug that gets the story's engine started, lending a buttery tartness to every line of dialogue she utters. She inhabits Phyllis in a way that makes us feel and know the reality of this woman without ever having met her real-life counterpart. This adds a lovely layer to the melancholy spicing the plot once Dr. Ike inevitably comes between Phyllis and Marty. "That's what family is, huh?" Phyllis says in a despondent moment. "It's a collection of people you owe an apology to."

Rudd and Hahn share a scene in Dr. Ike's office where she comes face to face with his superpower, nearly falling for his invasive therapy tactics before he jerks her out of her spell with a veiled insult he tries to pass off as an "ah-ha" moment. He reads her, but the way she furiously reads him in kind is simply outstanding.

Therapists of all stripes are bound of find "The Shrink Next Door" upsetting regardless of the fact that the real Dr. Herschkopf had his license revoked. In the way of all such strange-but-true stories, this is the nightmare scenario of what can happen when one lets the wrong people into their life and makes them privy to their deepest vulnerabilities.

The real Marty Markowitz, we eventually find out, has never returned to therapy. But you won't mind traveling with him on this crooked tale to understand how he arrived at that breakthrough.

The first three episodes of "The Shrink Next Door" debut on Apple TV+ on Friday, Nov. 11. Watch a trailer below via YouTube.