From extreme catfishing to wine fraud, here are 13 documentaries about con artists

Have "Tinder Swindler" and "Inventing Anna" piqued your curiosity? Check out a dozen more docs on next-level fakers 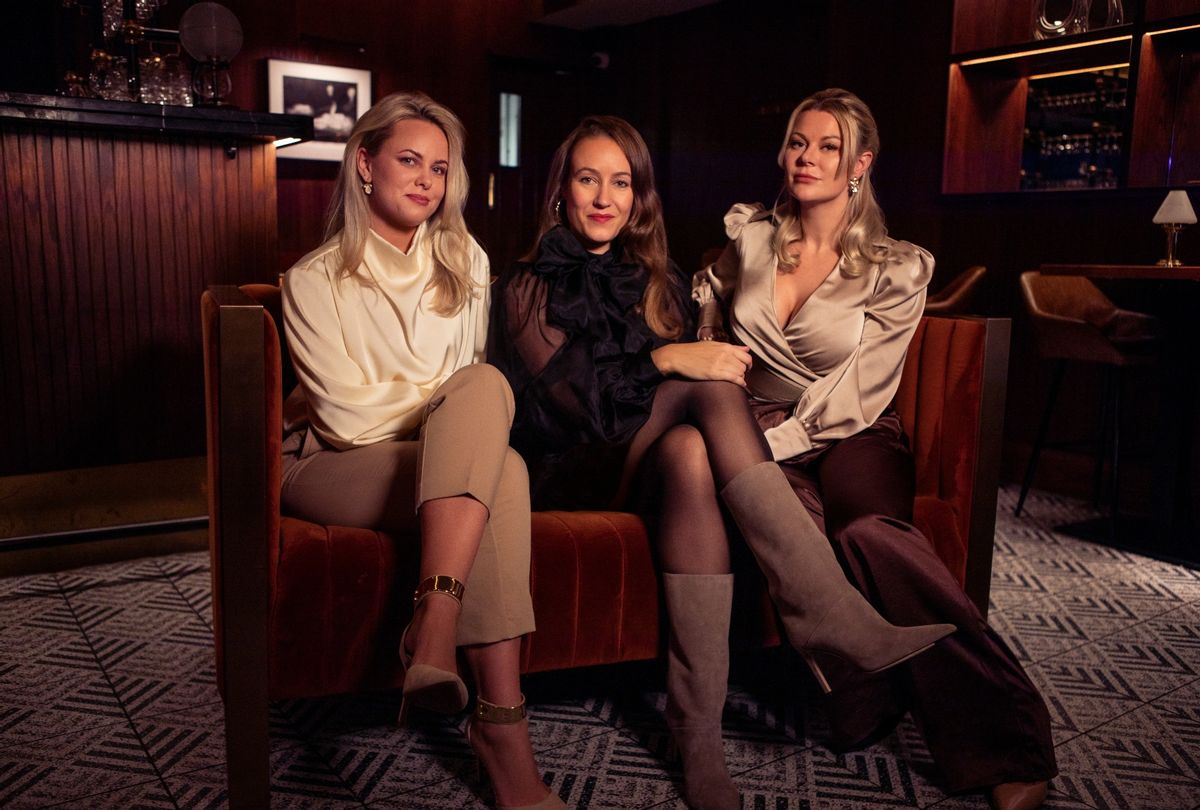 Sometimes there's nothing more satisfying to watch than a good con or, at least, watching how someone who has perpetrated one gets caught.

In those narratives, there's often a really appealing push-pull between admiring the artfulness of the fraudster and rooting for the investigators on their trail. It's also a brand of true crime that's a little lower stakes — and inherently less problematically salacious — than some of the gorier serial killer stories.

RELATED: "WeWork had all the bad red flags"

If you're fascinated by the scammers and schemers, the imposters and hoaxsters who walk among us (such as Anna Delvey as seen in "Inventing Anna"), then check out some of Salon's favorite documentaries and docuseries about some of the most intriguing cons in recent history. From an extreme catfisher to a man who donates forged art to museums, there's something for you.

This four-episode docuseries looks into a man who has taken catfishing to an absolutely wild extreme, resulting in a multi-state manhunt spearheaded by all the women he's left in his wake. "Love Fraud" investigates the case of Richard Scott Smith (that's just one of his names, by the way), a Kansas native who would try on different identities to lure new romantic partners — though just long enough to marry them and make off with their cars, credit cards and hearts.

A number of women who were scammed by him hire Carla Campbell, a pint-sized bounty hunter with a foul mouth and quick temper, to track Smith down before he strikes again.

"Generation Hustle" depicts the ploys of a dozen con artists and scammers – from faux Saudi princes, a German heiress and EDM kingpins. In "Hollywood Con Queen," a con artist swindles the pocketbooks of aspiring artists, luring them across the globe with the promise of high-paying jobs. The series also highlights infamous WeWork co-founder Adam Neumann and "Soho grifter" Anna Delvey.

As co-creator Angie Day told Salon, "Everyone wants to think that they're too smart to be conned, but actually, anyone could be conned." And that even includes the producers of "Generation Hustle," whom almost got conned by one if its subjects.

The world of high-dollar wine is one filled with excess, tradition and gatekeepers. But in 2006, Rudy Kurniawan, a 30-something Indonesian wine collector, seemingly burst out of nowhere when an auction company broke records by selling $35 million worth of his wines.

Kurniawan soon became a wine world darling as restaurant owners, Hollywood producers and billionaire Bill Koch purchased from his collection of Burgundies. And people loved him! He was a wine genius who had always had an encouraging word (and often a spare bottle of wine) for everyone.

However, elements of his origin story — how he accumulated his collection, how he learned about wine and how he made his money — started to unravel once a French winemaker started looking into his claims.

In "Sour Grapes," filmmakers Jerry Rothwell and Reuben Atlas investigate how Kurniawan pulled one of the biggest wine world scams in history.

J.T. Leroy, an HIV-positive young prostitute from West Virginia, penned memoirs of childhood abuse under the elusive nom de plume  "Terminator" during the late '90s. At the time, Leroy existed in a world of both mystery and celebrity, publicly schmoozing with Lou Reed and Winona Ryder while shrouded in a blonde wig, large sunglasses, and wide brimmed hat.

But the "Terminator" turned out to be 40-year-old Laura Albert. And the woman under the wig? Albert's sister-in-law Samantha Knoop. As Albert fabricates the persona of J.T. Leroy in an effort to cope with childhood demons involving non-consensual stays in a mental ward, Albert begins to embody Leroy, unable to separate herself from the character she created.

"The Woman Who Wasn't There," Amazon Prime

"The Woman Who Wasn't There" recounts the chilling story of Tania Head, President of the World Trade Survivors' Network. Head claimed to have survived severe injuries during the 9/11 south tower attack and the death of her fiance killed in the north tower. The group marveled at Head's resilience as she gained increasing national prominence as the poster child for the support network.

Until the tale began to unravel. As it turns out, the figurehead of the World Trade Survivors' Network was not even in New York on 9/11.

In "The Woman Who Wasn't There," Head recounts her own journey in unsettling detail, allowing viewers to grapple with Head's identity and the catalyst for her damaging hoax.

Mark Landis was one of America's most prolific art forgers. For over 30 years, he conned museums by donating paintings to them that he claimed were made and signed by famous artists, but had actually been created by him.

He generally targeted smaller museums, however his habit for making copies of the same painting — sometimes up to six at a time — finally caught up to him when Matthew Leininger, a museum manager with a grudge, started tracking Landis' movements.

However, when the two finally came face to face, Landis wasn't exactly the picture of the con man Leininger had painted in his mind. "Art and Craft" is a surprisingly heartwarming and humorous documentary that delves into truth, belief and mental illness.

Some of the best con stories are ones that are bolstered by schadenfreude — the kind where you're actually kind of okay with what the scam exposed about those who were taken. Then there are the ones where you're just dying for the con artist to get their just deserts instead.

"Fyre," Netflix's documentary about the ill-fated Fyre Festival, is the best of both worlds.The Fyre Festival was billed as a luxury music experience on a private island. It was supposed to be headlined by blockbuster acts and attended by an endless stream of Instagram influencers and models. But in the hands of a cocky entrepreneur, it failed in a spectacularly public fashion, leaving said influencers stranded with nothing but some lackluster cheese sandwiches and their cell phones.

"The Imposter" centers on the Barclay family, whose 16-year-old son disappeared in 1994 after an innocuous basketball outing with friends. Three years later Frederic Bourdin enters the scene – dark headed, with cold brown eyes and a heavy French accent. Bourdin claims to be the missing Barclay son, crafting an elaborate narrative to work around the obvious conundrum that Bourdin looks nothing like the blond, blue-eyed Nicholas Barclay.

From Director Bart Layton, "The Imposter" weaves through Bourdin's outlandish claims involving criminal sexual abuse, military personnel and international trafficking. Viewers hear from Bourdin and the Barclay family members themselves as they attempt to explain how a desperate, grieving hope gave Bourdin an opening to execute his nefarious plot.

Posing as a British spy, con-man Robert Hendy-Freegard swindled one million pounds from his female victims for over a decade. Using twisted manipulation tactics, he convinced victim Sarah Smith to go undercover for 10 years in order to flee the IRA. His exploitation of Sandra Clifton is ongoing; Clifton has been missing for seven years after her teenage children uncovered her relationship with Freegard. If you're looking to binge a machiavellian tale of deceit and greed, "The Puppet Master" will keep you on your toes.

"Made You Look," Netflix

"Made You Look", directed by Barry Avrich, delves into the elaborate forgery scam that rocked the '90s upscale art world. For more than a decade, Glafir Rosales sold Knoedler Gallery director Ann Freedman a series of iconic Jackson Pollock and Mark Rothko works on behalf of a clandestine wealthy collector.

Except . . . there was no wealthy collector. Nor Jackson Pollock and Mark Rothko pieces. Only 60 fake canvases that fetched more than $80 million by the end of the sordid ruse. The man behind the fakes? Pei-Shen Qian – Queens resident, Chinese national and math professor extraordinaire who dabbled in imitating Pollock and Rothko for fun. "Made You Look" ultimately raises the question: Is imitation a form of art itself?

"The Inventor: Out for Blood in Silicon Valley," HBO Max

With her deep voice and collection of black turtlenecks, Elizabeth Holmes was billed as the next Steve Jobs. Her company, Theranos, gained traction when they announced the invention of miniature blood testing labs called "Edisons." Holmes hit the covers of major magazines and managed to get glowing profiles about her purported genius — but a couple whistleblowers eventually tipped off reporters that Holmes was more interested in accolades than the scientific advancements her company was allegedly making.

This 2014 documentary is one of the oldest on this list ("Art and Craft" is from 2014, as well) and there are times that, watching it seven years later, it looks a little dated. That said, "An Honest Liar" is a splendidly meta examination of a man who used his talent for deception to build a career, who is also deeply intent on exposing the people who believes to be real fraudsters.

"An Honest Liar" documents the life of magician and escape artist James Randi. After turning 50 — and nearly drowning during one of his escape attempts — Randi turned his attention to exposing psychics, faith healers, and con-artists, many of whom used the same sleight of hand he had mastered for his stage shows.

The filmmakers also caught Randi and his partner of 25 years, José Alvarez, in some deception of their own, calling into question the bounds — and ultimate importance — of complete honesty.

Directed by Felicity Morris, "The Tinder Swindler" is the only documentary to top Netflix's global most-watched list, touting 45.8 million hours viewed in one week. The film follows Shimon Hayut, an Israeli con-man who poses as the heir to a large jewelry fortune under the alias Simon Leviev.

As "Leviev" wines and dines his female victims, the women dole out increasingly large sums of money to rescue Leviev from enemies purportedly demanding thousands of dollars from him. Victim Cecilie Fjellhøy's fling with Leviev, for example, left her saddled with more than £200,000 in credit card debt and clamoring for retribution. The documentary tracks the victims' pursuit of justice as they uncover Hayut's identity and launch a GoFundMe to repay their debts.