In the "Succession" season 3 finale, Roy sibling unity is no match for Daddy

In its examination of power, "Succession" returns to the source of Logan's wrath: His disdain for his children 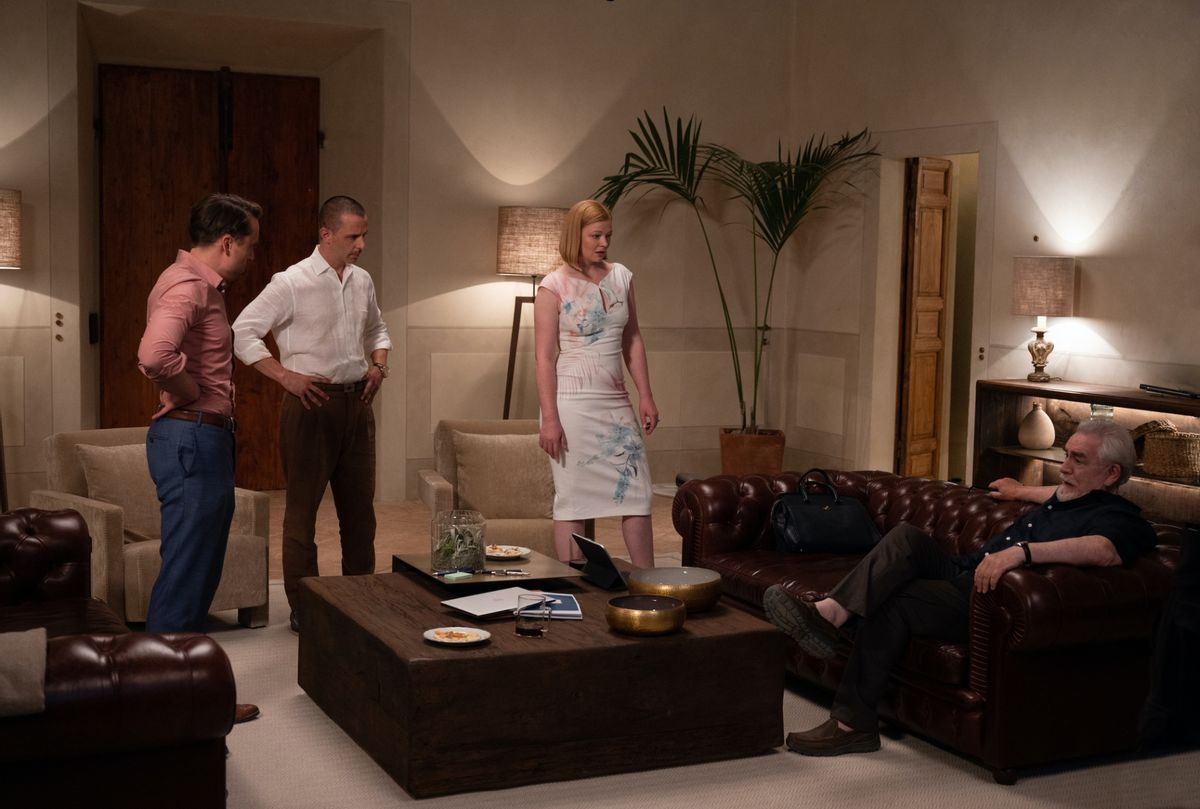 Spoiler alert: This article includes detailed discussions major plot points of the "Succession" season finale "All the Bells Say." If you haven't seen it yet, stop reading now and check out our other coverage of the show.

The "Succession" opening credits sequence is a mashup of Roy family home movies. A more accurate assessment would call them evidential videos that the children of Logan Roy (Brian Cox) were at one point allowed to be children. Sort of.

As Nicholas Britell's piano theme jingle-jangles in its ominous minor key, we take in sepia-filtered frames of the kids in an estate's garden — not playing in the grass but standing, unsmiling, radiating all the joy of the condemned before a firing squad.

But their father is always elsewhere, whether walking away, passing by and generally maintaining a vast emotional distance between him and his heirs. That leaves the youngsters we presume to be Connor (Alan Ruck), Kendall (Jeremy Strong), Shiv (Sarah Snook) and Roman (Kieran Culkin) with a permanent view of their father's back.

Every episode of the show reminds us that from a young age, Logan's kids have always been several steps behind him, if not on an entirely different continent. That makes the possibility at the climax of the third season's finale — that Kendall, Shiv and Roman could put aside their differences and work together to enact a full coup — so enthralling.

Jesse Armstrong, who wrote the episode directed by Mark Mylod, was never going to let the Roy scions pull off a regicide so cleanly.

RELATED: On "Succession" every dog has his day

But the fact that he had us believing even for a second that they could succeed proves how electric Strong, Snook and Culkin can be when they come together.  When they face down Cox, as Logan, and he annihilates his children, their hollowed-out expressions end the season exactly where it should.

Every "Succession" episode teems with searing lines, but Logan's face-melting speech kills the concept of fatherly love dead in the Roy bloodline for all time. The single lesson Shiv, Kendall and Roman can't seem to wrap their heads around is that Logan always wins, both for and against his family. When they're beaten bloody at his feet, Roman can only bleat, "Dad … please."

Logan asks what he has to offer him as a counterweight to a deal sealing their fates. Here Armstrong falls back to "King Lear" and Cordelia. "What I have got?" Roman lamely replies. "I dunno … f**kin' love?"

"You come for me with love?" Logan growls cynically. "You bust in here, guns in hand, and now you find they've turned to f**king sausages … you talk about love? You should have trusted me."

Roman can't even call on Gerri to help him, and why would she? "I'm focused on whatever outcome best serves the financial interests of the shareholders of the company," she says to Roman on his knees in front of her, asking for help. "But it doesn't serve my interests. How does it serve my interests?"

Armstrong's writing brings out the best in every moment of this episode, and every member of this cast, as ever.

While Strong rockets between despair and quiet, determined vengeance, Snook works her angry queen energy and Culkin writhes and withers between his siblings and his father, Cox shreds the scenes where Logan flexes his might, as he must. He's eyeing either ignominious obsolescence or acquisition at a point in Waystar Royco's timeline when it still has value and Logan himself has power.

The third season finale episode's title, "All the Bells Say" references another line from the John Berryman poem "Dream Song 29," from which the second season ender "This Is Not For Tears " draws its title. Here, Armstrong creates a flawless bookend to the previous season's closer.

"All the Bells Say" comes at the end of a season in which Logan turned Shiv and Roman against Kendall after he went rogue trying to assume a social justice warrior's mantle without knowing what the term means. Logan reels in Roman with the empty assurance of power in exchange for loyalty, and ices out Shiv at every turn as payback for any number of slights.

Mainly, though, Shiv's gender ensures that Daddy will never let her hold power. When Logan decides to jump on a private jet to seal a deal to merge Waystar Royco with the tech media conglomerate GoJo, he taps Roman to interface with GoJo's head Lukas Matsson (Alexander Skarsgård) instead of his dear Pinky.

This is after Logan's youngest son sends him a d**k pic meant for his general counsel Gerri (J. Smith-Cameron). Logan would rather put his trust in his lecherous sexual harasser of a son, not his daughter.

A more grievous insult comes Shiv's way later as her husband Tom (Matthew Macfadyen) makes a Faustian bargain to move him and Cousin Greg (Nicholas Braun) "away from the endless middle and towards the bottom of the top. "

"Do you want a deal with the Devil?" Tom asks Greg. When he says it, we don't know which Devil he's actually dancing with.

As is ever the case with "Succession," the business deals are far less important than what they tell us about how little Logan thinks of his children. In this finale, he's determined to break every single one of them, not just Kendall. But the bludgeoning he delivers is Olympian in power and cruelty, fitting for a man who believes himself to be a god.

The main action takes place at the Tuscany-set wedding reception for their mother Caroline (Harriet Walter), a fitting setting for the Roy children to be reminded in so many ways, and by so many traitors, that they are unloved in a world that's not inclined to shed a tear for them.

The episode begins with Connor, Shiv, Roman, Tom, Cousin Greg and Willa (Justine Lupe) playing Monopoly as they wait for Kendall to return from the hospital after his PR assistant Comfry (Dasha Nekrasova) finds him unconscious in the pool and fishes him out.

Shiv and Roman fall into their natural mode of making jokes at Kendall's expense — "the Kurt Cobain of the floaties," Roman quips — and when Kendall mumbles vacuous threats about a mounting a smear campaign via a profile in Vanity Fair, no one is moved. Comfry quietly admits that they're the one pitching the magazine, not the other way around … and there you have it.

By the middle of the episode, Connor is screaming "I am the eldest son!" to anyone who will hear it, sliding to such an emotional low that when Willa accepts his marriage proposal, days after he makes it, with, "F**k it. C'mon, how bad can it be, right? Why not?" that counts as an emotional win for him.

Kendall also hits rock bottom, again, finally spelling out to Shiv and Roman the circumstances of the mysterious murder that's been eating at his soul, revealing it to be on par with the Ted Kennedy Chappaquiddick incident. (Under the influence, Kendall drove into a lake with a server at Shiv's wedding reception and swam away, leaving the young man to drown.)

This time Roman and Shiv reach out their hands and pull him to his feet, entirely out of a sense of self-preservation through solidarity. For by this point, Connor has discovered a plug of maca root in Daddy's pantry, alerting him that Logan is trying to "fire up the siege engines" and perhaps have another baby … with his assistant Kerry (Zoë Winters)? Could be.

The womb's identity matters less than what this implies to Connor. "I guess he really doesn't rate you guys," he tells Shiv and Roman. Moments later they find out through texts and other subterranean channels that Logan is moving forward with the GoJo deal without their input, closing the door to any chance of them taking over.

Formally, "Succession" is a story of corporate power and the emotional cost the people who chase it pay to keep as much of it to themselves as they can. But in episodes like this and the second season finale, Armstrong foregrounds the true point of the struggle between Logan's heirs. Each is dying to prove Father loves them not only more than the others, but also enough to hand over the keys to the kingdom.

But when it looks likely that Matsson's going to be the one to score the kiss from daddy that's eluded Shiv, Roman and Kendall all their lives, that's enough to make these lifelong enemies into allies. During the brief moments when they're together, the Roy children realize that while none of them can run the company, each of them knows enough about their power as shareholders to gang up.

"I do think that, even though this literally makes me want to vomit and I want to kill you both every day, and it's all going to end horribly," Roman admits, "I do think that we — puuuuke — could make a pretty great team."

They do! Or at least, they look the part. Shiv struts assertively in the lead position as they enter the lion's den as a united front for once. But Daddy Roy is always many steps ahead, and puts Caroline on the line to deliver the cruelest cut. She and Logan have renegotiated their divorce agreement to change the terms of Kendall's, Shiv's and Roman's shares in the company, slitting their throats.

So it's not just their father who doesn't love them. Caroline, their mother, abandons all her impulses to protect her children as well. The final twist of the knife comes in the form of a warm pat on the shoulder Tom receives from Logan as he strides away from his defeated children, hinting that all this time Shiv has been sleeping with the enemy. 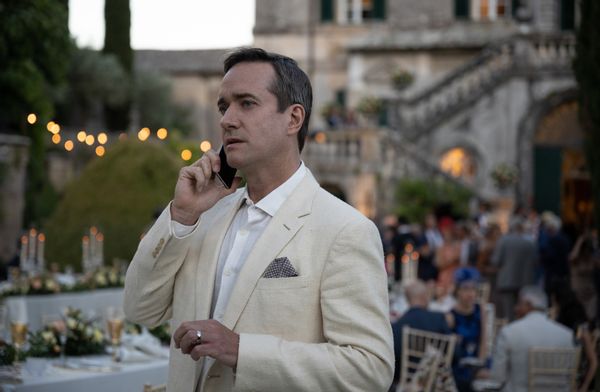 We should have known: "My hunch," Tom tells Kendall in episode six, "is that you're going to get f**ked. Because I've seen you get f**ked a lot. And I've never seen Logan get f**ked once." In "Chiantishire," Shiv tries to pass off her disgust with Tom as dirty talk ("You're not good enough for me. I'm way out of your f**king league. But that's why you want me," she says) and never stops to think he might take her insults as a challenge to outmaneuver her. He doesn't quite do that, but he arms the man who can and does. Sometimes being at the bottom of the top is enough.

All this leaves "Succession" at a staggering juncture, with Logan still on top, subduing his children again, perhaps for all time, by revealing their mother chose money over her love for them. Shiv knows that Tom loves what Logan can do for him more than his own wife.

Such is the fate for a group of people who spend their lives pursuing a father who doesn't want to be caught.

"Dream Song 29" is not a widely known poem, but those who may have looked it up might have predicted the events surrounding Caroline's destination wedding wasn't going to end well for the Roy children based on the line from which the episode's name comes. "All the bells say: too late."

That makes the title, like the episode itself, poetic perfection.

All episodes of "Succession" are streaming on HBO Max.