"Insecure" no more: The HBO comedy departs with satisfying confidence

At the end of five stellar years, Issa Rae ends her groundbreaking comedy by showing how far her heroines have come 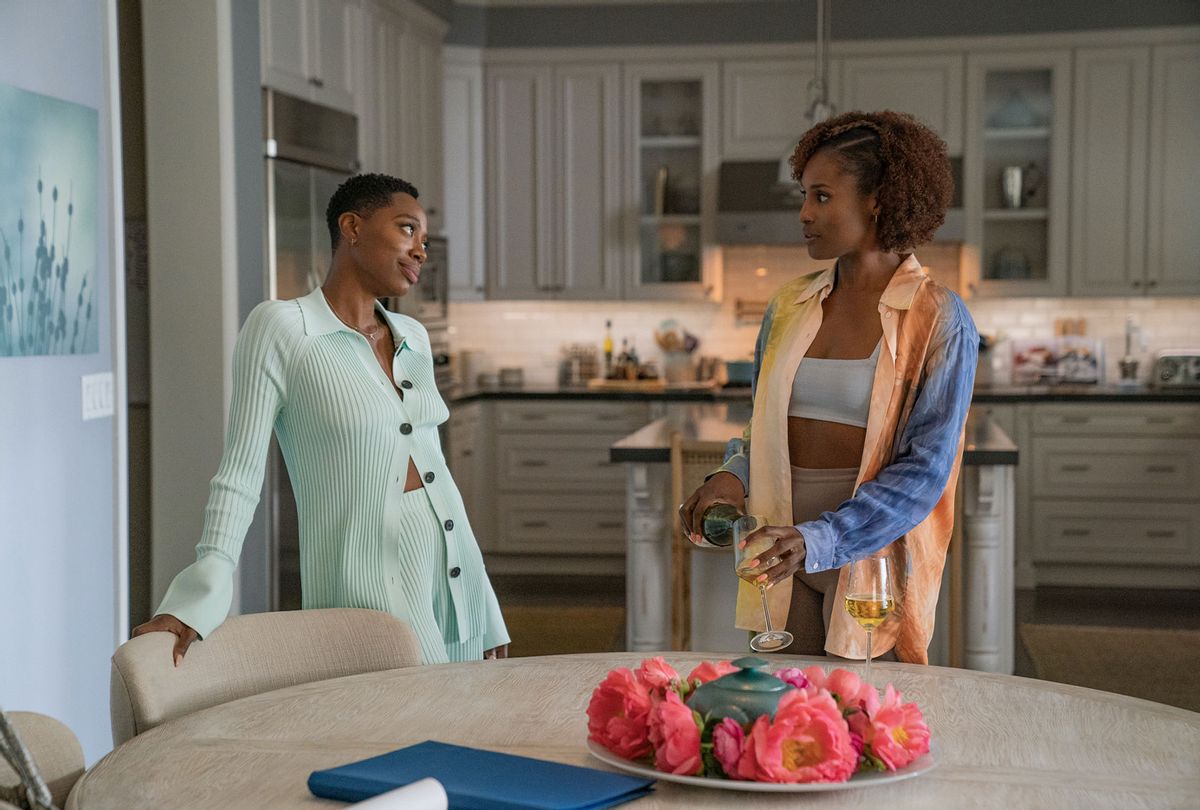 We carry a common set of expectations into series finales, and "Insecure" co-creator Issa Rae doesn't buck any of it. As she ends our time with her alter ego Issa Dee, Rae ticks several boxes on the universal series closer bingo card – answering lingering questions, delivering happy endings, tying bows on wishes.

But it's all a piece of the broader significance of Rae and her characters Issa (Rae), Molly (Yvonne Orji), Tiffany (Amanda Seales) and Kelli (Natasha Rothwell) arriving at this finish line. If every great show's send-off can be summarized with one succinct moral, this one invites us to look back not with yearning of what could have been, but in total appreciation.

Besides, every episode title of "Insecure" answers a question. What are Issa and Molly like, the pilot asks? "Insecure as f**k." So it goes through the second "Hella" season ("Hella Great," "Hella Shook"), and third's pervasive vibe of uncertainty, captured in titles such as "Better-Like," and "Ready-Like," describing how thirtysomething life typically feels as one sets a course by their ambitions.

RELATED: We're not ready to let go of "Insecure"

It involves glimpsing a lot of goals and directions but not quite getting where you want to be when you expected to. That's been the larger story of Issa's life, and Molly's. If you relate to this show at all, you know it well. Season 4, the "Lowkey" season (with episode titles such as "Lowkey Distant," "Lowkey Done," and "Lowkey Lost") express the simmering frustration and resentment of being stuck on a plateau, the kind that can make best friends turn on each other … or propel us someplace new.

That explains the decisive "Okay?!" finishing off every fifth season title. Each reads in any number of ways depending on the tenor of that week's story, expressing everything from frustration ("Faulty, Okay?!") to resignation ("Choices, Okay?!") or simply relating ("Tired, Okay?!").

By announcing "Everything Gonna Be, Okay?!" the finale reassures its audience – and Issa, who confers with the mirror personal early in the 41-minute episode and sighs, "I just want to fast forward to the part of my life where everything's OK." Trust the title.

"Insecure" wraps up on its own terms, a victory not guaranteed in TV and certainly not with shows centering non-white actors and characters (a truth to which "Insecure" co-creator Larry Wilmore can attest). We take for granted the acclaim and status this one earned over its five stunning seasons — a mantle that Rae, along with showrunner Prentice Penny and everyone else in its cast, carry with a pride devoid of arrogance.

To be sure, "Insecure" cleared the way for shows like Amazon's "Harlem" and Starz's "Run the World." But so did "Living Single," the '90s Fox sitcom following six friends living in Brooklyn brownstone that pre-dated "Friends." Starved of the level of promotion its Warner Bros. counterpart received, it was cancelled at the end of a shortened season in 1998 despite its consistent popularity with Black audiences.

Another "Insecure" predecessor, "Girlfriends," ended in 2008 without its foursome receiving their farewell flowers. So if Rae, who wrote the finale directed by Penny, places Issa in a classic two princes contest between Lawrence (Jay Ellis) and Nathan (Kendrick Sampson), recognize that this is the realization of a moment Black characters, actors and writers don't usually get on TV.

Moreover, it is Issa Dee and Molly Carter's creator fulfilling the desires these best friends express in the very first episode. Make a note of that.  Final seasons of our favorite shows usually inspire a full series rewind, something many "Insecure" fans were doing on the regular anyway. But to fully savor the show's finish, which is satisfying on its own, simply revisit the series premiere.

It was only five years ago, but five years ago was a lifetime, a feeling that Rae and Penny toy with throughout the conclusion. The premiere introduces Issa as she's turning 29 years old and working at "We Got Y'all," the archetypical non-profit dedicated to serving a segment of the population its founder and staff doesn't understand.

Issa is the only Black person working there, and Molly's in the same situation at her law firm. And this is one of the highway markers we can use to measure the distance their stories and the show itself has traveled since 2016.

When "Insecure" launched, producers believed that featuring white characters in shows centering Black stories was essential to broadening their audience. But "Insecure" didn't lose its white viewership when the show let go of its white characters after Issa and Molly left their old jobs. As of 2018, Rae confirmed at a Cannes event, the show's viewership was 62 percent white.

And that shouldn't be surprising. All great shows speak everyone. This one delivers comfort and reassurance about the challenges of thriving in your 30s, when many of us are still figuring out what we want to do and how we want to live as we burrowing into the middle of careers in which we may not have pictured ourselves. Aspiring to be singular, and better, is an ideal that "Insecure" champions and one that also appeals to the American story.

The show differentiates itself from what's come before by representing that philosophy through visions of Black excellence as uniqueness. That's expressed through its forward-looking fashion sense, its hairstyle game, the hazy, seductive music, featuring tracks by emerging artists, and the dreamy visual style established by executive producer Melina Matsoukas, who set the tone by directing many of its first season and second season episodes.

We see it in its cast, of course; "Insecure" elevated the profiles of all its stars, introducing Orji and Seales to broader audiences and pulling the enormously talented Rothwell out of the writers' room to give her one of the funniest roles on TV. (She's also one of the chief highlights of the limited series "The White Lotus.") And we're witnessing it in Rae's meteoric rise to become one of Hollywood's most sought-after talents, both as an actor and a producer.

The questions this show asks at the beginning are the same ones Issa, Molly and those they love carry with them five years later, and into the future, as so many of us do. Issa has steadily lived her way into answering some of those questions that once stalled her out.

"How different would my life be if I actually went after what I wanted?" she hypothetically asks in front of a grade school class in the series premiere. In turn the kids make her feel small with their inquisitions: "Is this what you always wanted to do?" "Are you single?" "Why aren't you married?"

From there, Issa and Molly keep questioning everything about their careers, their love lives, each other. "Where are we going?" "Are we here?" "Am I official?"

That makes "Everything Gonna Be, Okay?!" the correct final answer as well as a declaration of resolve and assurance – not only for the characters but everyone watching.

"You went from We Got Y'all to 'I got mine,'" one of Issa's loved ones tells her, speaking from a place of awe at how far she's come, and maybe reminding us to appreciate our own travels through uncertainty. And this ensures this show will keep speaking to us long after we've parted ways.