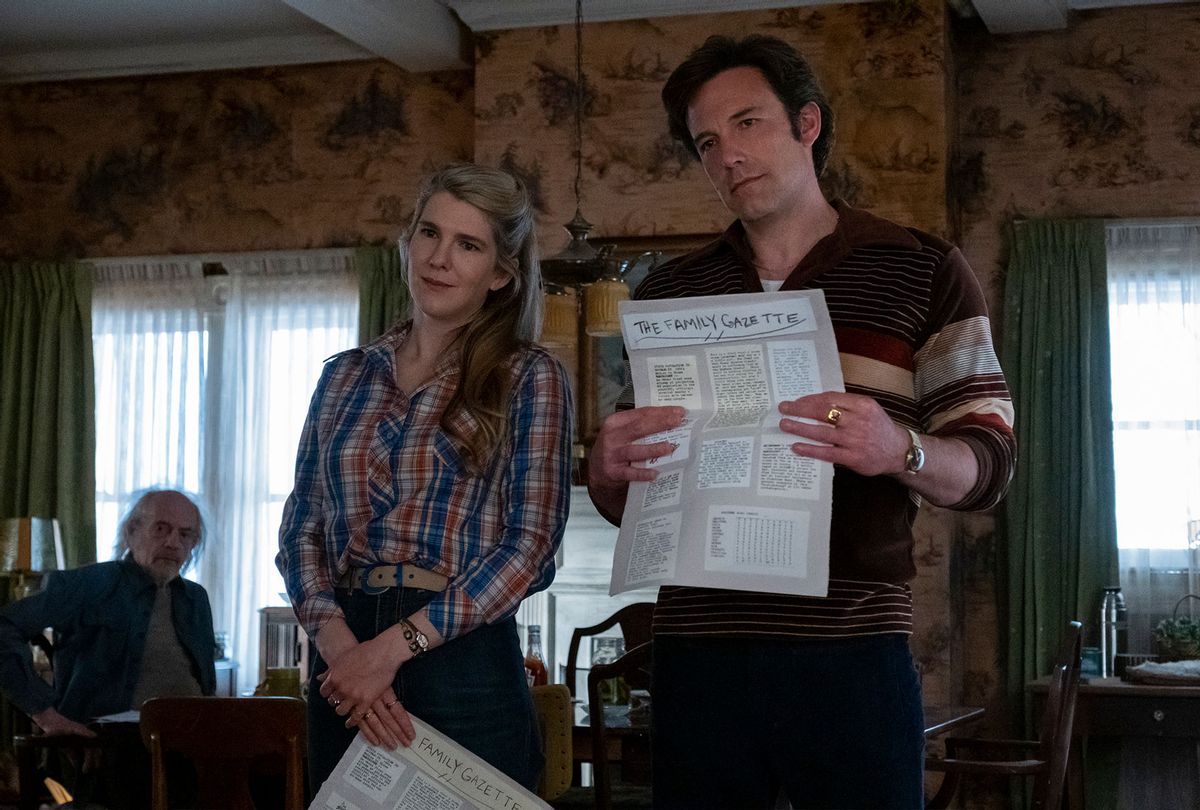 Lily Rabe is one of the busiest performers in Hollywood. In just the past year and a half, you've seen her in "The Undoing," "Tell Me Your Secrets," "The Underground Railroad" and of course, "American Horror Story." Now, in the new George Clooney-directed Amazon studio film "The Tender Bar," she costars with Ben Affleck, Christopher Lloyd and Tye Sheridan as a tenacious single mother with big dreams for her only child.

Rabe joined me on "Salon Talks" for a conversation about being directed by an Oscar-winning actor, what dancing taught her about acting, and how she keeps all her death scenes so fresh. Watch our conversation here, or read a Q&A of it below.

The following interview has been lightly edited for clarity and length.

The film is based on a memoir of the same name, about growing up in Long Island in the '70s and '80s. I want to know how you came to this project and who your character Dorothy is.

Dorothy is the protagonist's single mother, and he's her only child. It's a coming of age story in a lot of ways. It's also so much a story about mother-son relationships, and the family that we build when we are missing what we might think is a very significant piece of it. Her son has an absent father, and so he has quite a remarkable relationship with his uncle. The book is so beautiful, and is dedicated to his mother. They had such a remarkable, remarkable relationship.

You've said everyone who approaches this film feels a personal connection to it. What about it from your own personal life as a mother, as a member of a family, resonated with you?

I did feel such a personal connection to it. I also felt there are roles that come to you at different points in your life. Sometimes there is that lightning in a bottle feeling where you think, "Not only do I have to play this part, but I have to play this part right now. In this moment in my life I have this way into who this person is and to telling her story, and I have to do it." That's how I felt about her. I was so struck both in the screenplay and in the memoir by her tenacity and also her genuine hopefulness.

She has a default position of optimism and ambition for her son. She talks about Yale and she talks about him being a lawyer quite a lot, but really it's not about vicarious living through her child. She's not a stage mother. She's not trying to get him to fill the void in her own life. She genuinely wants him to be able to move forward and have the most joyful, fully realized life possible. I haven't experienced, in a script or in a film, that quality in the way that I did reading this and then getting to play her.

I was wondering watching this, about performing in a film with someone who as your director is also an Oscar-winning actor themselves. You've worked with so many great directors, but is there something different about working with someone who is coming to it from that perspective?

Definitely. But I would say that George does it absolutely uniquely. He's an actor who has accomplished so much, but really I think he's an actor who genuinely loves filmmaking. He loves acting and he loves actors. He also knows exactly the environment to create for people to do their best work and to feel their freest doing it. He creates that environment genuinely. He also gives the most wonderful notes. They're so specific. They're so simple. He knows the movie that he's making. He's so confident and clear, and he's a great leader.

Very often, you find yourself on a set where you can feel in the director this sense of self doubt. After a scene, you'll see them go off and talk to 10 people about whether they have it or whether we should get some more insurance coverage and set the camera up over here. It's just never going to happen with George because he knows exactly what he needs. It doesn't mean he won't change his mind or admit fault at some point, which is always welcome. This idea of, "I know where we're going," I felt so profoundly from him. It was very wonderful to work in that environment.

It's a very assured film on every level. There is this real comfort level that you all seem to have with each other. I was thinking of the different ways in which that comes about, and part of it that really leaped out is the Long Island accent and the consistency of everybody. You've done accents before. How did you prepare to do this character and get into that voice?

I love accents. Coming from the theater, your voice — whether there's an accent or not — that's such a part of the way that I work. I have wonderful people in my life that I work with and I love to work on it on my own. Having her voice, that accent, that's who she is. They can't exist separately. That kind of work is something that I always love doing. I really loved doing it with her, but there was no finding her without that.

You have played Shakespearean characters and you've done Ibsen, and you've also played a lot of real people like Amelia Earhart and Aileen Wuornos. You have two new projects coming out where you are playing real people, "Love and Death" and "First Lady." What is the rabbit hole you go down in that preparation, or does it vary from character to character and project to project?

It does vary from character to character and project to project. There's always for me a heightened sense of responsibility. That responsibility comes with such wonderful opportunity because you get to learn so much about not only who these people were, but who these people were to other people. In the case of this film, Dorothy is not someone who was necessarily in the public eye. Certainly people experienced her through the reading of the memoir, but I got to know her. So much of how I got to know her was through her son's eyes. That was such a wonderful process and thing to be able to do.

I love when I watch actors who started out as dancers, whether it's you or someone like Margaret Qualley, because you can just see the physicality that they bring even to these very restrained roles. I'm curious how you have interpreted that. In what ways are you still a dancer in everything you do?

I love talking about dance and I am so grateful for the training that I had as a dancer, not only physically, but just mentally. Learning that discipline at such a young age, and this idea that you don't ever come into class and cut to the end. You have to warm up. You're always going back to the basics and to first position. Because I did start so young, having that unconsciously instilled in me as part of the process that I've carried with me through my acting career, I'm so grateful for it.

There's also this idea of telling a story with your fingertips, because when you're dancing on stage, or if you're acting on stage, there are no closeups. Your voice and every part of your body, that's what you have. You don't have someone who's going to be able to zoom in on a closeup or to make sure that it's clear that your hand is gripping the bottom of the chair. It's all on you to be able to express that fully from head to toe. I come back to it all the time, or I never leave it. It's so with me. My mother [Jill Clayburgh] was an actress and my father [playwright David Rabe] was in the business. I started dancing when I was three. It was my indirect route to getting to acting, but it was my own.

My mother loved the ballet, but she herself hadn't been a dancer. She was just someone who loved it. We were on the Upper West Side walking down the street, and the way she tells the story is that it was Broadway Dance Center or something where you can see the dancers on the top floor through the window. I just said, with great determination, "I want to do that." And we marched up the stairs and she said, "When could she start? How does this work?" And that was that.

When I think about dance, I think about the word "repertory." You in your career have forged this path with other actors in the Ryan Murphy world where it really has become something of a repertory company, where you see the same people again and again, taking on different roles. I'm wondering if that's also informed by your dance experience, or what it is about that coming back to a company that is so appealing to you as an actor.

It is so appealing to me as an actor, having a creative shorthand with people when it's good. Good doesn't mean it's never difficult or that there's zero conflict. I just mean that it's creatively good in all the ways that that can be true. Having that shorthand is something that I always love coming back to — certainly having it in my life in the theater, working at the Public, working with Dan Sullivan, working on "Horror Story," working for the second time with ["The Undoing's"] Susanne Bier in a short period. My God, I hope I get to work with Barry Jenkins again. I hope I get to work with George and Ben again. They are great artists. There's no question. But it is also that thing that you find where you just work with certain people and you realize, "Oh, we've gotten to the heart of things so quickly." I always will want to walk towards that. Very often, that's repeat business.

Of course the ideal thing is to find the projects where every element is there, but certainly there are directors I would work with maybe not even reading a script. The hope is to find something that checks all the boxes. But even if I fell in love with a part now but I didn't feel aligned or that the material was aligned with the director, I wouldn't do it. I may have said yes before. So that's shifted a bit.

I know what you have coming ahead, including a project that is based on a true crime story. You have died a lot in your career, Lily. I've watched you die many, many times. What's the secret to dying on camera?

I don't feel expert. I'm saying that only because each experience of it is so incredibly different and it can be so painful, but it never is the same. Much like playing sort of any scene, there are no two times that I have died on camera or on stage that have felt remotely similar. I don't know that I have the perfect answer, but I can say that I'm never like, "I'm a real pro at this." I'm not varsity at this. It always feels like the first time.

"The Tender Bar" is now streaming on Prime Video. Watch a trailer for it below, via YouTube.

More of our favorite actors in conversation: