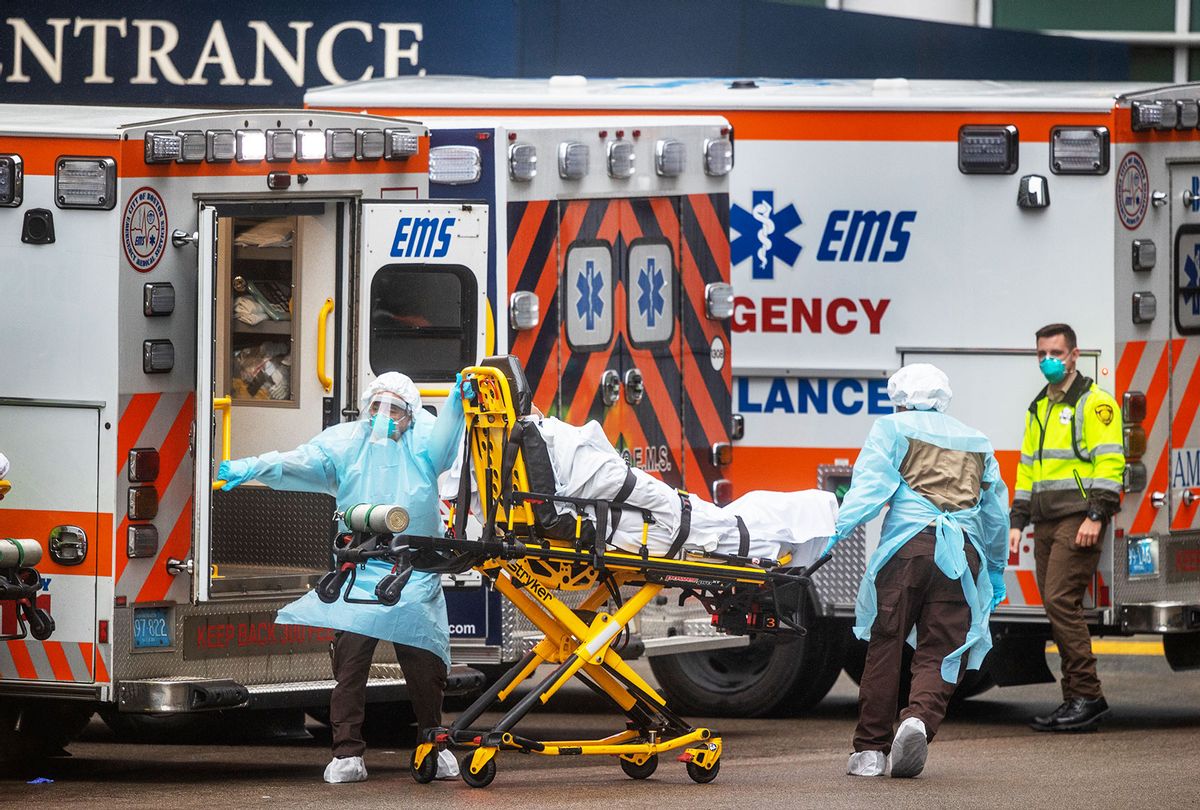 EMTs rush a patient to the emergency room at Massachusetts General Hospital in Boston on March 24, 2020, as the number of confirmed Massachusetts cases of coronavirus soars to near 5,000. (Stan Grossfeld/The Boston Globe via Getty Images)
--

"I haven't opened a newspaper this morning," Emily Maloney says when I ask if she's read the latest dire news story about our American healthcare system. Then she adds the kicker: "I've actually spent the last two hours on the phone with our insurance company."

Maloney has experienced the medical world from a variety of angles — as a frustrated, misdiagnosed patient, as an overtaxed ER tech in a Chicago trauma center, as a curious writer. "I had believed that doctors knew everything," she writes early on in her new collection of essays. And with that trust, she paid a price. "Cost of Living" explores the financial, physical and psychic toll of trying to survive within a broken system, from an itemized tally of Maloney's medications (one of which ran "a couple of hundred dollars" a month and tasted "like licking a battery") to the types of restraints used in emergencies (two) to the calculations providers make in assessing addiction risk (unquantifiable). It's a complicated and intimate tale of the messy healthcare apparatus we're all at the mercy of.

Salon talked to the author recently while she was recovering from a breakthrough case of COVID-19 about how the system can be saved, and what patients don't understand about emergency rooms.

I keep coming back to that line in the book where you say what an emergency room is good for and what it is not good for. That's certainly about my own experience. It's good if you're in septic shock. It's not good if you have a broken arm. What did you mean when you said that, and what do you think you have learned from being on both sides of the equation?

I think the answer lies in several things. One, we need a single-payer health care system. People are coming to the ER because they don't have a primary care physician a lot of the time, or they're not getting relief from whomever they've seen prior to coming to the ER. We live in a world where there's just very low health literacy, and we're operating from an illness-based model instead of a wellness-based model. The notion of preventative medicine, for most people, does not exist, because no one wants to go and see their doctor — provided they even have one — because no one can get the time off from work, or it's going to cost too much money, or they don't have health insurance.

And so we're in a place where a lot of people show up in the emergency department, and they're not necessarily going to be helped by being there. That's especially true now with COVID patients, who are flooding the ER. The patients who are non-COVID patients, a lot of those folks are not able to get the help that they need. You see that in terms of outpatient surgeries being canceled or delayed, basic medical decision-making being impeded by patients who are flooding the ER.

I think of myself as a fairly health-literate person who tries to make good choices in life, but it's also there is this sense of, "Well, what am I supposed to do if I broke my arm? Where am I supposed to go if I'm not dying but there's a problem, or I don't know if I'm dying?"

Right. People can't understand whether or not they're dying. If you see people in the ER, you see them on the worst day of their lives, usually. But the worst day of their life might not result in death. It might just be a really bad day. They come by different names, but using an urgent care or fast-track or doc-in-a-box, which has a really bad reputation and connotation, there are certain sections of the emergency department that might be devoted to orthopedic injuries like broken arms, or people who need sutures but didn't have a loss of consciousness, that sort of thing.

RELATED: Learning how to talk to your doctor is a skill that might just save your life

Emily: A lot of people like to rag on the NHS, but they're doing a pretty good job. I think PBMs should be illegal. I think big health insurance should be illegal. Everyone's just trying to do the best they can with the resources they have, and the resources they have are not enough. There needs to be massive investment in infrastructure in terms of the health care system, a complete overhaul, in order to get to a point where we can actually help people.

I think that happens in terms of health literacy. This is something that should be taught in school, honestly. How to know what's wrong with you, and how to be able to navigate for basic systems, but also not to have so many systems that you have to be sufficiently educated to navigate them. That's the other problem, that we're both unable to access the health care that we need, and also hopelessly mired in bureaucracy at the same time. So health literacy is huge.

We need to be sending a lot more people to medical school. The road to being a doctor is a very long one, and it's a very expensive one, and it should be neither. We should have more residency spots. There's just not enough residency spots for people to match into residencies. Even if you graduate from medical school and you're reasonably well-qualified to become a physician, you passed your step one and you have good scores or even okay scores, you're still unable to match, especially if you attended medical school outside the U.S., which a lot of people end up having to do in order to get into medical school. That adds an additional cost.

I know lots of people who have gone to medical school in the Caribbean, and they're great doctors. They're still an MD or a DO. They still provide the same level of care that people who are educated in the U.S. provide, yet they had to go elsewhere to seek an education, in large part because they didn't score well enough on the MCAT. That does our country a real disservice, because patients should have access to physicians, and the fact that we don't even have enough physicians to go around is sort of wild. The idea that we're living in a world where people don't have access to basic preventative health care is crazy.

I want to talk about pain. You write in the book about this idea of "safer" medication and "safer" pain management, and the slippery slope that we are all on — that balance between listening to patients and taking their pain seriously, and over-medicating or letting them manage it themselves DYI in a way that's always going to be disastrous. What have you seen from that side of it, and what do you wish we as patients knew about the way that pain is managed in the ER?

Pain is managed poorly. Pain is an acute problem. If you go to the ER for chronic pain, that's a real problem, because no one's going to be able to help you with that. That's a real issue that unfortunately is not going to resolve itself any time soon.

What happens is frequently patients present to the ER with real problems. Their pain is still real, even if they are taking too much of their medication by diversion. Diversion is the most common way to take medication. So you might save some it for later. You might take it in a different way than what was prescribed or directed to use. You might take more than what you've been prescribed or allotted for a particular time period. There's lots of different ways to participate in diversion of your medication. But what's really important to understand is that regardless of whether or not patients are engaging in diversion, regardless of whether or not patients are feeling like they're getting the help they need, their pain is still real. Whether you're an addict or not, whether you are using your pain medication incorrectly or not, whether you've been on a safe dose of OxyContin since you came home from the first Gulf War or not, unfortunately we are operating from a space where we're unable to help those patients.

The refrain among the pain patient community is, "dependent but not addicted." A lot of pain patients are dependent on their medications. They don't view themselves as addicted, and honestly the evidence suggests that very few pain patients become, quote unquote, "addicts." There's a lot of genetic evidence that certain kinds of patients with certain gene markers are more likely to be sort of prone for addiction or primed for addiction, but among the general public, a lot of patients are stable on the same amount of drug for a long time.

We had the CDC's guidelines come down and attempt to regulate the amount of drug that is being dosed to people. the CDC should not be in the practice of medicine, really. It's really up to doctors and their patients to decide what's best for them on an individual basis. Patients who are on a certain amount of a drug should not be taken off that drug because that amount arbitrarily exceeds whatever value that has been set by the CDC, or the DEA, or anything like that.