To the crimes of "Inventing Anna," add atrocious journalism 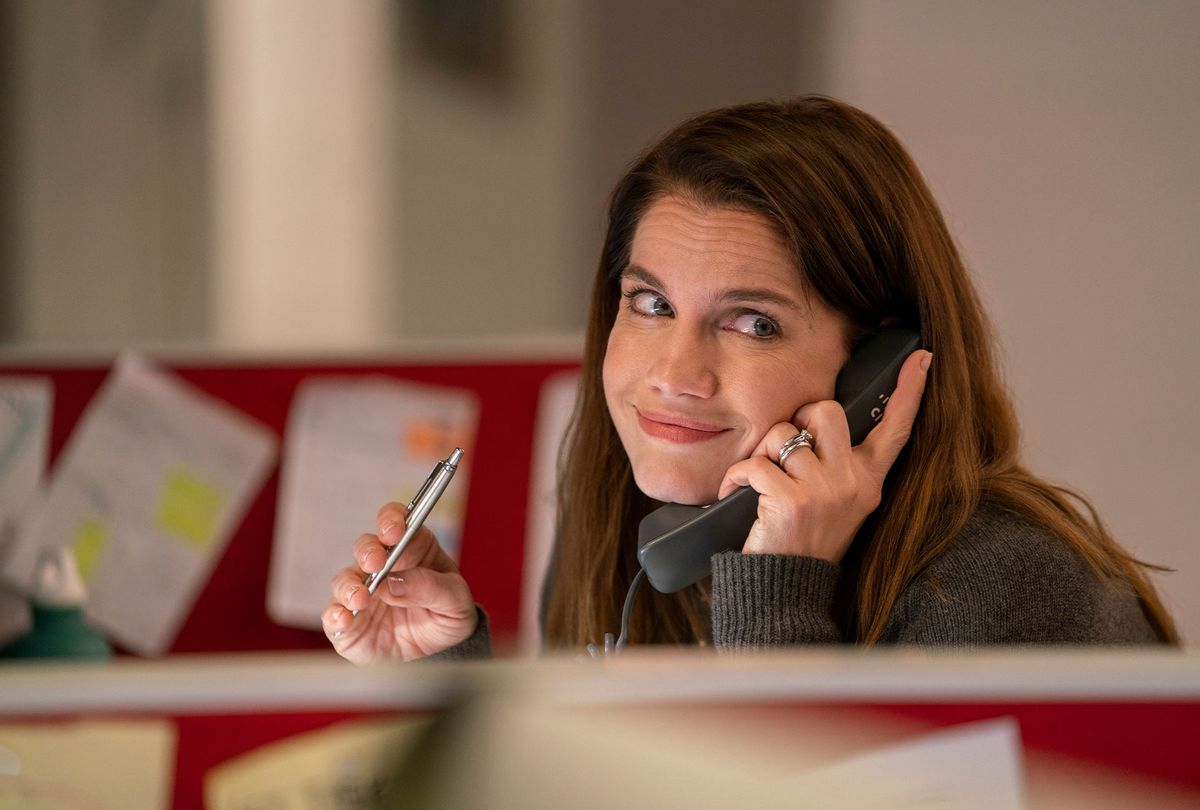 We have likely all had the experience of seeing the actual job we do portrayed on television well, wrong. Sometimes, we witness our entire home region painted in the broad brush of total inaccuracy by people who aren't from there.

But fraudsters in general have always been enjoyed by America. We love the incredibly toxic (and totally incorrect) bootstraps myth — and who is more self-made than someone who's made it all up, who's lying about everything? More than that, perhaps we love finding hucksters out. We love being the one to catch the liar in a lie. To call out the emperor for wearing no clothes. Or, in the case of the Netflix show "Inventing Anna," wearing designer clothes purchased with a stolen credit card.

"Inventing Anna" fictionalizes the life and crimes of one Anna Sorokin, a convicted Russian-German fraudster. She cheated expensive hotels and powerful financial institutions out of hundreds of thousands of dollars. But Anna isn't the only character living a lie in the Shonda Rimes series.

"Inventing Anna" has an imposter journalist too.

Related: "Inventing Anna" takes a good story, imprisons it in unnecessary excess and robs of us our time

"Inventing Anna" is based on a New York Magazine story by Jessica Pressler about Sorokin, who went by the name Anna Delvey. The article, titled "Maybe She Had So Much Money She Just Lost Track of It," was published in May 2018. Shondaland wrote that Pressler "broke the story on Delvey and her crimes," and that upon publication of the magazine article, "the calls started rolling in almost immediately to try and option the story. Ultimately . . . Pressler chose Shonda Rhimes to steer her hard-won investigative piece into the world of television and create another fictionalized version of herself."

Pressler had already been dramatized once before, played by Julia Stiles, after Pressler's article "The Hustlers at Scores" was adapted into the 2019 film "Hustlers." As Stiles's character does not share Pressler's name, neither does Anna Chlumsky's fictionalized character based off Pressler in "Inventing Anna." That character is named Vivian Kent. I would distance myself from her too.

Vivian works as a writer for a New York City-based magazine called Manhattan magazine. It looks like a very nice place to work with windows and congenial colleagues (more on them later), except Vivian has a history. She writes under a dark cloud — and was forced to turn down an apparently better, new job than her Manhattan staff writer position — after she reported a story about teenager making millions off the stock market, which turned out to be false. She had to return to the magazine in shame, while her editor apparently suffered no career consequences, and in fact, in the way of men, got promoted.

Though this part is actually kind of true — in 2014, Pressler reported a fake claim, which New York Magazine published then publicly apologized for — it feels, in the way that truth is often stranger than fiction, implausible. That Vivian would believe and publish such a lie. That a weird listicle would continue to haunt her career, and that her desk at work would be pushed to the far corner like a child being punished in school.

The fake claim shame takes up a lot of space in the series, in a way that starts to feel self-indulgent, a desperate attempt to make Vivian sympathetic and align her with Anna. In real life, Pressler bounced back pretty quickly with the whole "Hustlers" movie thing.

But Vivian has something to prove, I guess, and she's not going to be content with the #metoo story her editors assign, for a reason that she doesn't spell out until quite late in the show (and it's not much of a reason). No, she's going to interrupt her bosses in a meeting and demand to be assigned a different story.

This is not the way to earn the respect of your editors. This is also not the way for a character to endear themselves to an audience.

Vivian is supposed to be our everywoman. Anna (Julia Garner) calls out how disheveled she looks all the time, and makes mean girl comments about the weight of Vivian, who is pregnant.

But Vivian's behavior is far from relatable. And as a journalist, it's ethically questionable, at best. As the New York Times writes, "For a show that includes a reporter among its producers, the writers pay little attention to what true or at least ethical reporting looks like." And it's not only any reporter-producer here, but the one who wrote the New York Magazine story in the first place, Pressler.

Journalist Vivian is a bad employee. And not in the Erin Brockovich, going to get to the bottom of this injustice way. But bad in the way of: She disregards her work assignments and lies about where she is during the work day. She lies to get in to visit Anna at Rikers, pretending she's not on a media visit (because it takes too long to get approval) but a personal one. She manipulates the outcome of Anna's trial by convincing the young woman not to take a plea bargain. And she does so because it's better for Vivian's own story.

In a wildly implausible move, Vivian basically joins Anna's defense team, cataloguing evidence and pleading to Anna's beleaguered lawyer (Arian Moayed): "Let me be part of the team." He makes some questionable moves himself, like allowing Vivian to riffle through the discovery documents, and the two become unlikely, close friends. It's not cute. It's disturbing, though perhaps the reddest of red flags comes when Anna demands that Vivian buy her underwear. And Vivian does. She also lends Anna her own dress to wear when Anna goes on trial.

There are other fallacies about journalism in this show that stars a journalist. The offices of Manhattan magazine are giant, filled with a happy, huge staff that has apparently never seen the layoffs that ravaged much of the journalism industry. Staffers seem to write about a story a month each. Vivian has weeks upon weeks to write her story, and when she's given even more time to write, my partner — who is also a journalist — and I burst into raucous laughter.

Not only does Vivian have infinite time to write a single story, she has a whole team behind her — literally — in the best part of the show, the writers of the so-called Scriberia. After the whole published-a-lie thing, Vivian was banished to a cubicle at the end of the newsroom, where her neighbors are older writers played by Anna Deavere Smith as Maud, Jeff Perry as Lou and Terry Kinney as Barry.

In other words, the dream team.

I'd like to be assigned to Scriberia, please, because that seems like a winning group of colleagues. They are supportive, good-natured and wise, pumping her up — and doing a lot of her work for her, including the grunt work of research for her own article. Again, writers at Manhattan do not have enough to do, and possibly the magazine should consider downsizing.

But please, keep the so-called old timers of Scriberia, the only big, beating heart in a show that can feel pretty cold. Lou is unflaggingly supportive, even to the point of following Vivian into the restroom to make sure she's all right. Maud is practical but comforting, like a reporter aunt. Barry provides the humor, but also, the deep research. Like Anna, Vivian is not a very good friend to these loving friends who actually stick by her; she talks often of leaving them at the first opportunity for her own corner office.

Recently, when I filed multiple stories in a day, including an intense one, I just kept thinking of Scriberia. How much I wished I had a Lou to lift the pages as I printed them, to read supportively behind me. A Barry to do research. A Maud to cheer me on.

It's strange to feel nostalgic for the late 2010's — but this show is pre-pandemic (and it feels innocent) when we might have all worked together in that office. Had a reason to get dressed and leave the house in the morning. Had colleagues to think through stories and give pep talks in the women's restroom.

Nothing is more lonely than writing. And team Scriberia's support extends to that most unlikely circumstance, as any working mom will tell you: support of Vivian through her pregnancy and into early motherhood.

Not a lot of "Inventing Anna" seems real, so a fantastical view of motherhood should come as no surprise. Having a newborn while reporting in the field doesn't faze Vivian, but not much does, including trying to do her job responsibly. Or, you know, correctly.

Unlike Erin Brockovich. Vivian is not fighting for the greater good. She's fighting for her own article while pretending to fight for the life of a young woman, who isn't the most sympathetic, either. With her splashy magazine story, in a way, Vivian invents Anna. But the show invents an idea of a journalist too, one who is unscrupulous and not worth Scriberia's support.