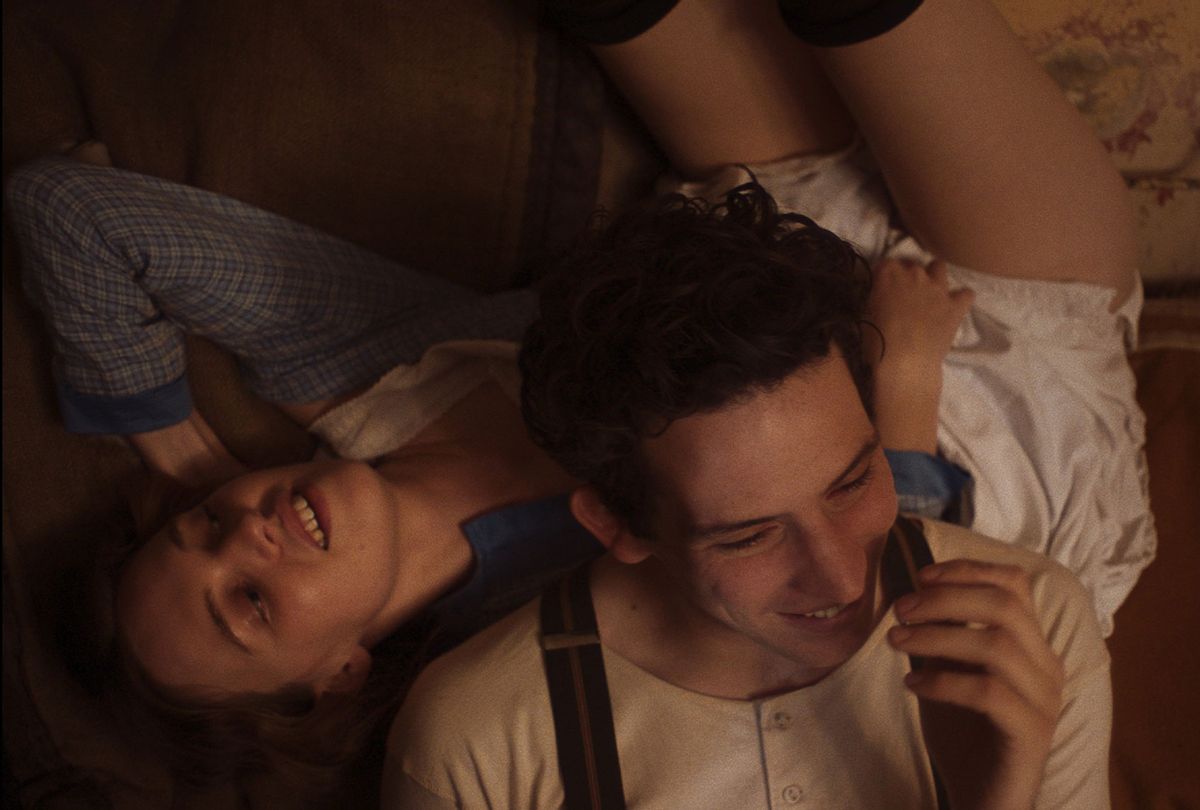 The superb, heartbreaking drama, "Mothering Sunday," depicts the clandestine affair between Jane Fairchild (Odessa Young), a maid, and the upper-class Paul Sheringham (Josh O'Connor, of "The Crown"). Director Eva Husson maintains a firm grasp on the repressed emotions in a time — England after the Great War — as the characters are all filled with optimism and sadness in this adaptation of the Graham Swift novel.

The story features several narrative strands, which Husson effectively uses to create a prism to observe Jane at critical times in her life. The main thread has Jane and Paul meeting, discreetly, on a Sunday morning, (Mother's Day, 1924), for a tryst. It may be the couple's last encounter as he is engaged to wed Emma (Emma D'Arcy). A second plotline takes places a few decades later as Jane (Young again) is romantically involved with Donald (Sope Dirisu), a Black man in 1950s England. The last storyline jumps ahead a few more decades. Jane is now an old woman (Glenda Jackson).

Jane's experiences shape her into a writer, and Husson captures how her protagonist picks up on cues about a woman's place in society, the differences between classes, and issues of race and gender. A marvelous scene features Jane, nude, walking around the Sheringham estate taking in the paintings, eating a piece of pie, or examining books in the vast library.

Donald asks Jane when she knew she would be a writer. When did you know you would be a filmmaker? "Mothering Sunday" is very different from your previous features, "The Bang Gang" and "Girls of the Sun."

Pretty early on. I wanted to be a writer when I was 10. I kept diaries and numbered the notebooks at that age. I was scouted in the street at 14 to be an actress. I went to drama school, and I kept thinking, they don't know what the f**k they are talking about. I could do better than this. When I was 18, I didn't want to be an actress anymore, I wanted to be a director. So very early on.

There is also an observation that Jane's work as a maid, allows her to be a keen observer of life. What can you say about how you filmed the details and creating such a powerful drama?

That was something that was very present in the script, and something I felt extremely comfortable with. It's how I live my life. I am aware of things, and I knew how to convey it. I saw it in [screenwriter Alice Birch]'s writing. I added only a few things, like signifiers of time to make clear distinctions and the associations to go from one stimulus to another — that was very much in the editing process. For example, the sound of an ambulance in 1948 to Jane typing, and how you go from one sound relative to another, like in a dream.

Yes, you use flashbacks and flashforwards astutely as well as cutting to words on a page to depict fragmented memories or emotional triggers. You use slow motion to present the idle rich, and often shoot characters in reflection. What decisions did you make in telling this story visually?

I used very simple things to show how people feel trapped in their condition. The first time you see Emma she is caught in a reflection of her own image; you see her through the mirror. A lot of the characters are caught up in the representation of themselves. When Jane first appears on screen, you think you see her directly, and you see she is trapped behind glass. She scrubs, and that's her job as a writer — she polishes and cleans until she gets to the truth. I love that we have this image of her completely lost in her thoughts, you can see her concentration and focus, and she blinks and snaps out of it. That is such a telling image of what being a writer is, the ability to get lost in your own trance. That's the entry door. The connections between the Janes in the different eras are her looking outside. 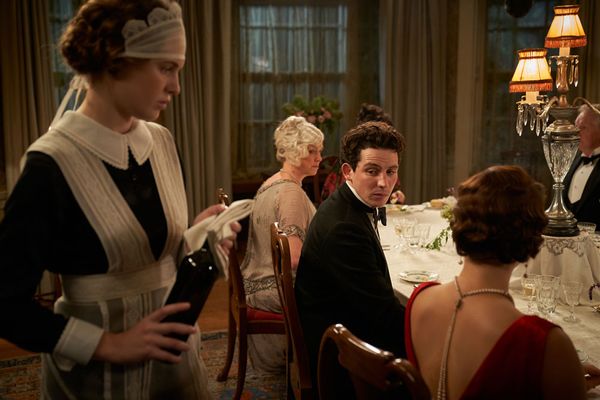 Mothering Sunday (Sony Pictures Classics)The film addresses themes of class — I loved Emma's encounter with a waiter (Deano Mitchison) who puts her in her place, by showing his experiences are not unlike hers. What can you say about the appeal of and our collective fascination with British class period drama?

It's just this heightened version of the class struggles. It makes things more obvious which is why we find them more interesting. We are drawn to separation of classes. It's good ground for fiction. The whole film is really a great exploration of gender, class, and race struggles and conflict. I agree with you about the scene with the waiter. There was talk of getting rid of that scene, saying it was long and pointless, and I said, "No way, It's gold!" It gives us such an incredible window to Emma's character. She was an ice-cold lady before that, and it shows in another time or another era she would have been so much freer and in touch with her emotions.

What do you think Paul sees in Jane? Their relationship could very well have been a flirtation, but we feel it is something deeper. He tells her, "You're my true future."

I think it's a capacity to live his emotions vicariously. He knows, without her he doesn't have access to his emotions because he bottles them up. That's just what you do when you live that life. He is also aware of her intellectual capacities. He's aware she's more intelligent and articulate than he is, and he is fine with it. He has some modernity. She's great with books. The 1920s are really refreshing on that level. You didn't know what cynicism was. We have a very unhealthy relationship with cynicism. People were very trapped in their circumstances and at the same time open to the potential of something. People were fluid sexually, then. Why put words on things? You just were something. You were attracted to a person it could be a man or a woman. You could dream of things in a much simpler way.

It was the era of the Bright Young Things . . .

Exactly.  The Bloomsbury group — everyone was in love with everybody. They were trying to be very sincere. There was a vital, metaphysical need for sincerity. Some people had access to that, because they were more middle class like Virginia Woolf and Jane. Others were so constrained that they couldn't allow themselves to feel it.

Jane is told she has "nothing to lose" and that is a gift. It empowers her. But she also suffers. What are your thoughts on her character? She is kind of fearless and headstrong.

The point of that was to show she was not wasting time. She did what she wanted to do. She just walks naked in a house when there is nothing about her gender or her class that allows her to do it. She thinks why not? Why would I not stand proud and naked in this context? She stands proud and naked in front of this wall of names of white male writers who have written the history of patriarchy. Her mere presence is political. Her relationship with Donald is political, but she does not verbalize it, but I think it is beautiful to see people live by the standards of their ethics without creating a discourse around it. 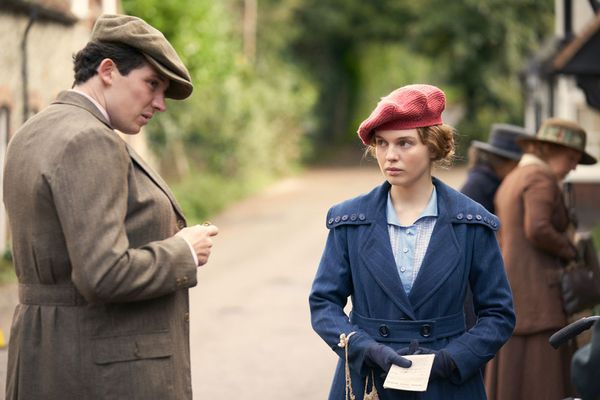 Mothering Sunday (Sony Pictures Classics)I also want to talk about how you use space and depict intimacy. The film is very painterly; you use dark backgrounds to highlight the lovers' skin at times. How did your female gaze inform your presentation of the film's depiction of sexuality?

The history of cinema has obviously been shaped and dominated by a male gaze where nudity is associated with lust and sex, and it has dropped the ball on the representation of nudity when it stands for different things — and it does, and one of them is the relationship to intimacy. Nudity is also how comfortable are you with someone. If you are extremely comfortable with someone, you are capable of spend hours talking to them naked without being aware of being naked. Nudity levels out classes. When Paul and Jane are naked, they are equals. That is also a strength she has.

It was important to go back to that function of nudity: What does it say about intimacy and politics? When she walks around naked in the house, it is not me showing her being a pretty sex kitten — on the contrary — I want to show the political body owning the space, making a bold political statement just by being. That scene moved me to tears in the book. I was terrified and excited to bring that to the screen because I've never seen that. I know women throughout history have done that. I have done that. It's funny how such a small gesture can represent so much.

The female gaze for me was to not shy away from sex, because nudity is also sex, but in the scope of the importance in a relationship it was it give it back its due proportion. It is one minute of screen time, and the rest is intimacy around it. As a society, if we don't represent nudity the way it really is, the only representations we are going to have is pornography which is completely biased and skewed and distorted. Cinema has had to shy away from the representation of nudity. How many films do you see in theaters that have a proper exploration of that?  It's more on TV, and there's not so much of the softness or tenderness.

The film is very much about our internal thoughts and what we reveal to others. There is an emphasis on manners and expectations. Several of the film's characters have emotional moments or even outbursts. What observations do you have about how you present the characters publicly and privately, and within the rules of civility?

I think it is very important. We all have to carry on a public persona in public of what we are expected to behave like according to our social classes and our culture. We know the codes very well when it comes to the British upper class. It is less obvious in working class and proletariat, and Jane belongs to that class. That was important for me to show how much Jane had to put a wall of absence of emotion in public. It's not that she had a stiff upper lip; she's not allowed to emote when she learns of heartbreak in not allowed to show any emotion. She has to go into the kitchen and grunt as a dog and then gather herself and show her face. That the working classes have not had much access to showing emotion in public has not explored as much or as openly, and it is very much an issue. The middle class is the closest thing to a perfect balance — the financial comfort to aspire to minimum of a comfortable life and not have pressure of upper class. With a lot of money, everything is at stake in relationships, and it is harder to know how authentic they are. Middle class is the best of both worlds. Being sincere is a privilege of the middle class — to be aligned with your emotions — which may be why I was able to become a filmmaker.

"Mothering Sunday" is in theaters beginning March 25. Watch a trailer for it below, via YouTube.