Stephanie Grisham blows Sunny Hostin's mind with the level of influence Thomas had & relates what she saw Jan. 6 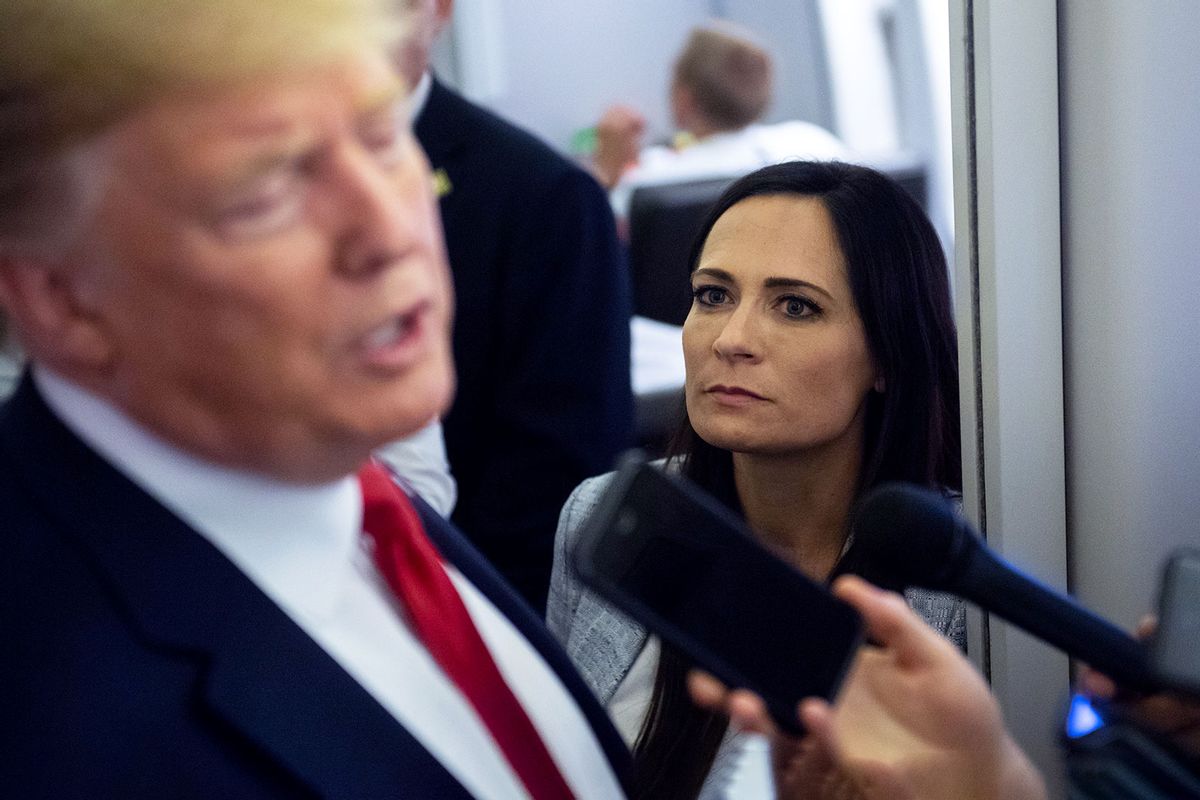 White House Press Secretary Stephanie Grisham listens as US President Donald Trump speaks to the media aboard Air Force One while flying between El Paso, Texas and Joint Base Andrews in Maryland, August 7, 2019. (SAUL LOEB/AFP via Getty Images)
--

Over a year after the Jan. 6 insurrection, former President Donald Trump is still spinning his version of events, and of course the hosts of "The View" have something to say about that. This time though, they have an insider source to fact-check his narratives: guest co-host Stephanie Grisham, who served as the White House press secretary under the former administration.

In particular, they address Trump's recent interview with The Washington Post in which he makes many claims, including how the Secret Service kept him from marching to the Capitol alongside his supporters, trying to shift the responsibility of stopping the violence to Nancy Pelosi (who was in hiding for fear of her life at the time) and how he doesn't recall "getting very many" phone calls that day.

RELATED: "The View" hosts argue over GOP hypocrisy and ask: "How credible is Mike Pence?"

"I'll say one thing about the call logs, and this is my own personal opinion," Grisham says. "I think there weren't many calls because he didn't want to take any. He didn't want to hear from people."

She also confirms how much influence Ginni Thomas had on Trump and paints a picture of them as being fairly chummy, occasionally meeting up for lunch.

"At that time we [the President's personal staff] would all be scrambling to do damage control knowing that once she [Thomas] left he [Trump] would be telling us who needed to be fired, who was a Never-Trumper in the White House or administration, who was in the 'deep state' because she would come with a list of people who should be fired," Grisham says.

Thomas also advised Trump who to hire, a sticky situation that Grisham says they had to "work around."

The revelation shocks co-host Sunny Hostin, who is fascinated that Supreme Court Justice's wife has influence in the dealings of the executive branch. "It's like a shadow government," she marvels.

"She, I think, is one of those folks that demands attention and has lists of things that she wants to make sure he's aware of," Whoopi Goldberg says.

Grisham says that Trump ultimately wanted to lead "the largest crowd ever" and be regarded as a "king." According to her, throughout his presidency, Trump abused Article 2 of the Constitution — which states that "the executive Power shall be vested in a President of the United States of America" — to "do whatever he wants" without considering the repercussions. This is also why she calls "bull" on his claim that he was sitting back to let Pelosi take control of the situation.

"Even in this interview he sounds as sensitive as a toilet seat," says Joy Behar. "Five people died that day and all he's talking about is the number of people who were there to, you know, continue with the 'Big Lie.'"

The panelists also ask Grisham if she's heard from the Trump base following the insurrection.

"I've not been hearing from them," she shares. "They've been digging into my personal life, stalking my biological father, trying to plant really bad stories about me."

Grisham also notes that Trump's claim that his decision to run for president in 2024 depends on his health doesn't wash since he's often bragged about being in "very good" health, even while adhering to a diet of fast foods and high-calorie meals.

"I think it's a way to be able to not run," Grisham says.

"He's scared of losing," Behar asserts. "And he will lose."