The comedian spoke to Salon about countering fake news with artifice, from spoof MTG interviews to Trump showtunes 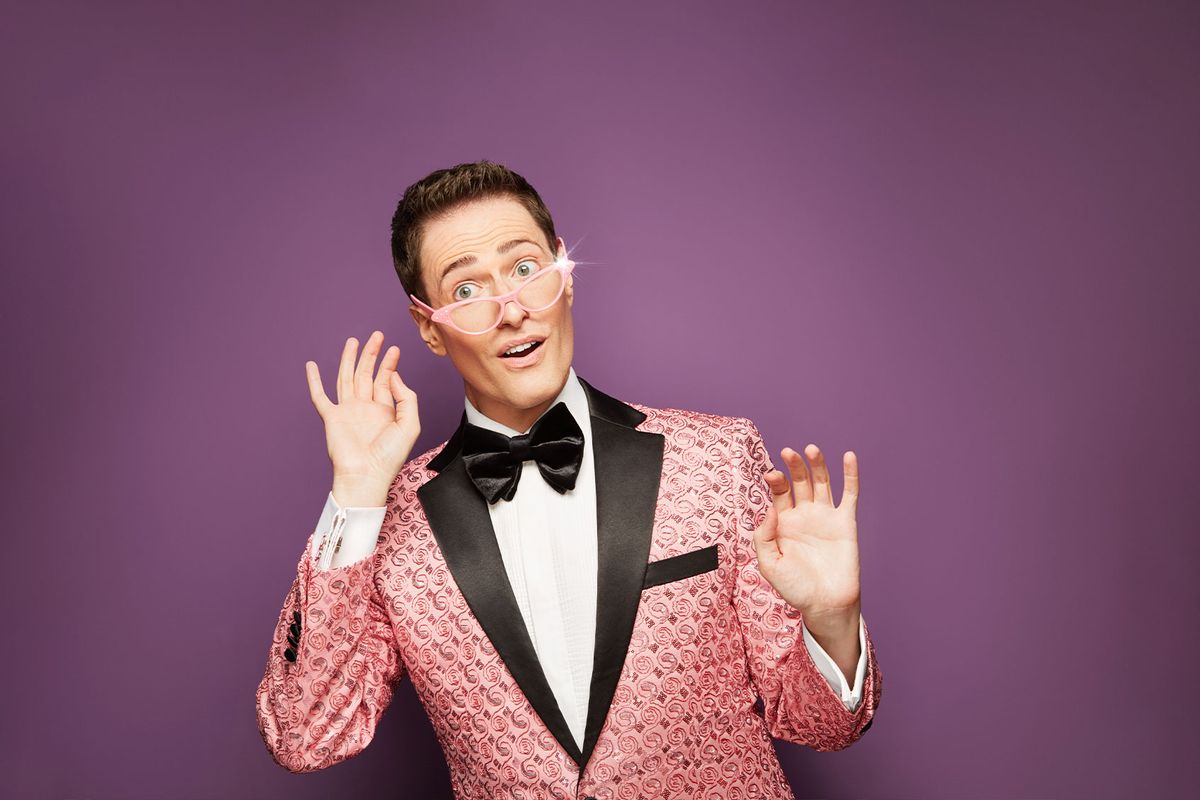 Here's how you know you're watching your first Randy Rainbow video. For a few seconds, you're wondering whether you've played the wrong one, because some well-dressed talking head seems to be interviewing, say, Marjorie Taylor Greene, a politician you loathe. You're thinking, I thought this was supposed to be funny. Before you can scroll away, though, you realize something's just . . . not . . . real.

The graphic in the lower left corner of the screen reads "Fake News," not Fox News. The interviewer starts insulting Greene right to her face. He responds to her first comment by muttering "Who gives a s**t?," donning a pair of sparkly glasses, and calling her a few names you really wish you could call her yourself . . . and then it gets interesting.

Suddenly, the "interview" becomes a music video. That talking head is now wearing a lab coat and singing "Gurl, You're a Karen" while Lauren Boebert — another of your "favorites" — rambles behind him. As you keep listening, the melody starts to feel familiar. Is that . . . a show tune? (It is. It's "Dentist!" from "Little Shop of Horrors.") Wait: now he's in drag. Now there are THREE of him in drag! This thing is spectacular!

His chief comedic achievement is his mastery of the song parody. Videos from his ever-growing catalog, like "Cheetoh Christ, Stupid-Czar" and "Braggadocious," are routinely streamed by millions. Scrolling through his YouTube channel is like salivating over a tray of petit fours in an exquisite patisserie. Every song he produces is yummy, delightful, and expertly artificial. Sharing a new one on social media is like bringing the dessert everyone ends up raving about to the party. It really doesn't hurt that they're easy to look at, too.

Rainbow himself, however, is more than just a pretty face framed by his signature pink glasses. For more than a decade, bit by bit, he has constructed a magnetic persona that serves as an avatar for contemporary rage and bewilderment, giving voice to our collective anxieties throughout the Trump-and-COVID era.

Rainbow ... has constructed a magnetic persona that serves as an avatar for contemporary rage and bewilderment.

Lest anyone mistake that persona for the real man, Rainbow has written a fetching memoir, "Playing with Myself" (St. Martin's Press) that reveals more of who he really is and where he comes from, both comedically and personally.

"I really wanted to write this book to kind of introduce myself because people came to know me just through this sort of two-dimensional version of me," he explained in an interview with Salon. "And I really wanted to take down the curtain. I was craving, like, being real a little bit." 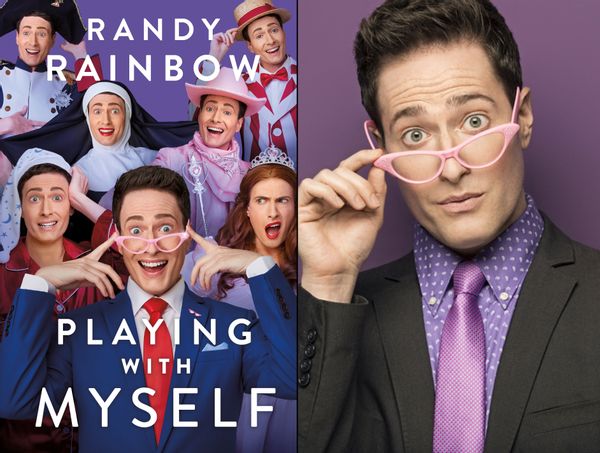 Playing With Myself by Randy Rainbow (Dirty Sugar Photography)Although he started releasing videos in 2010, Rainbow became a cultural touchstone during the 2016 presidential election campaign. While Donald Trump shattered political norms left and right, conventional media struggled to keep up with his torrent of falsehoods. Guided by Steve Bannon's insidious strategy, Trump "flooded the zone" with what Kellyanne Conway later called "alternative facts." All the major newspapers and networks wrestled with whether to call them lies while new lies replaced the originals.

America's best-known political satirists — Stephen Colbert, Samantha Bee, and John Oliver — gamely rose to the occasion, calling out Trump's falsehoods and dissecting his unreal universe night after night. They engaged in what humor theorist James Caron (author of "Satire as the Comic Public Sphere") has called "satiractivism," counteracting the effects of Trump calling real stories "fake news" by presenting real news on fake news programs. No matter how funny they were, though, their satire never fully succeeded, largely because you can't shame a man who, by all accounts, has no shame.

Rainbow's campy caricature proved to be far more effective at skewering the absurdity of the modern GOP than their faux news shows, largely because as he developed his oeuvre, he put comedy and entertainment before rhetoric.

"I really just wanted to be, you know, Carol Burnett and Julie Andrews and Barbra Streisand and maybe some Jerry Lewis," he said.

Rainbow inherited his devotion to entertainment from his family. "That's in my blood," he said. "You know, that old Borscht Belt kind of Jewish humor and performance." Indeed, his great-grandmother Estelle was even a Borscht Belt singer. His grandmother Nanny, a major influence, was a live wire. He describes her in his memoir as "savagely quick-witted, a Michelango of sarcasm, the greatest story-teller around."

Over time, though, Rainbow realized that comedy could do more than generate laughter. "I began to appreciate what an effective tool it actually was for delivering political and social commentary on such widely polarizing issues," he noted in "Playing with Myself." His humor became more personal and took on more of an agenda.

Throughout the Trump administration, while Rainbow continued to release videos, Americans found themselves trapped in social media bubbles. Sociologist Jean Boudrillard called the social world a "simulacrum," a hyper-reality full of noise, images, and symbols designed to mesmerize the mind and replace the boring real world.

To satirize the falsity of conservative politics, he would have to co-opt their methods.

With the advent of that simulacrum, the line between reporting and editorializing was erased. News on social media was delivered via cutesy memes and bot-written tweets. The result was a lack of distinction between news and entertainment, fact and fiction.

"There's no categories any more," Rainbow said. "People are scrolling through their feeds. They see a tweet from Kamala Harris, and then Marjorie Taylor Greene, and then they see something from MSNBC, and then they see Randy Rainbow, and it's all in the same font, so I think people don't take the time to put it into its proper category."

While mainstream comedy largely tried to mock the simulacrum from outside, Rainbow knew the real fight had to take place inside the matrix instead. To satirize the falsity of conservative politics, he would have to co-opt their methods. Caron calls Rainbow's approach "truthiness satire," exposing the simulacrum by creating a competing, obviously false reality, exposing both worlds as fakes.

When Trump's e-troops marched in misleading rhetorical lock-step from tweet to tweet, Rainbow countered by creating digital clones of himself to sing in perfect harmony. Trump coiffed his impossible hair, turned his face orange, and donned ill-fitting suits, and Rainbow responded with wigs, makeup, costumes, and clever video editing. Trump raged, and Rainbow sang back at him, delivering bravura performances that matched the former President's outsized ego with his own larger-than-life character.

In "Playing with Myself," Rainbow offers glimpses of where that character originated. As a boy, he wore yellow pajama pants on his head to imitate the blonde pigtails of the girls he knew at school, foreshadowing his future array of wigs. By middle school, he'd amassed an impressive collection of Broadway cast recordings. (Most of the songs he parodies are from musicals.) As an overweight adolescent, he carried note cards with snappy comebacks in his pocket to defuse the taunts of schoolyard bullies, getting an early start at using words to punch up, just as he does now with his deft lyrics.

The Randy Rainbow persona doesn't seem very far from the man himself.

"I might be saying, as the persona, exactly what I feel," he told Salon, "but it might be perfectly scripted and well-timed, or through song, or it might be in a sassy, witty response that I might not necessarily come up with on the fly if I were just having a conversation with somebody." 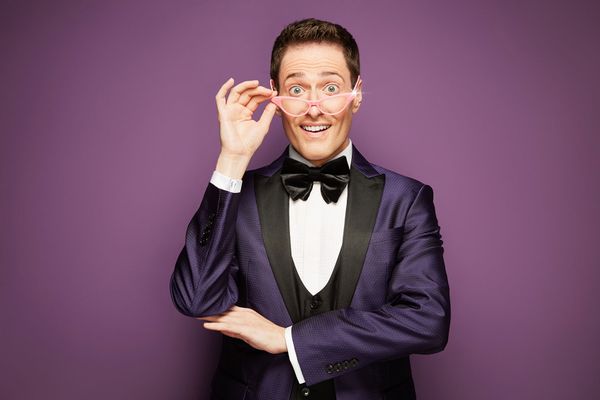 "I don't think that I can really trust other people to know what to do with me."

It took Rainbow years to become who he is now. After graduating high school, he made the classic leap of faith for an actor — moving to New York to find work — but struggled like so many others before him.

"I was just too afraid to audition," he said. "I didn't have the confidence. I had been on stage my entire life leading up to that point, but to come to New York, that was big-time."

After being fired from a production of "South Pacific" — he was just "not butch enough," they told him — he realized that in order to make it, he would have to follow a less conventional path. That path began with a revelation.

"I don't think that I can really trust other people to know what to do with me."

Weary of waiting for someone else to say yes to his ample talent, Rainbow decided to say yes to himself. With little more than a wardrobe full of costumes and a homemade green screen, he transformed his dextrous wit and encyclopedic knowledge of musical theater into a profoundly successful career.

"I was able to make the decision to produce myself," he said, "and that was ultimately my success."

RELATED: "Head of the Class" and the man behind the '80s comedy's progressive, even radical agenda

In the 21st century, anyone with a cell phone and a Twitter account can shoot videos and try to win the attention of an increasingly distracted modern audience. Billions make the attempt, in fact, their voices becoming the internet's background hum, but very few succeed. Rainbow is the rare stand-out exception. His self-produced comedy has earned him both industry recognition — including three Emmy nominations — and the viral enthusiasm of countless fans.

Surprisingly, some of those fans seem to come from across the deep partisan divide.

"I receive lots of email from people telling me things like, 'I'm a strict, conservative, Republican, QAnon anti-vaxxer, but I just love your videos!'" he wrote in "Playing with Myself."

While not naive, Rainbow remains hopeful that he might have some small effect on people.

"I have to assume that while they're laughing and singing along," he wrote. "They might also be ingesting at least a few secondhand ideas that are, shall we say, alternative to their own."

Conservatives aren't the only ones who might have had their minds opened by Rainbow's work. The performer himself seems to have learned a thing or two as well.

"The comedy I've been doing really has also helped me find my voice in other ways," he told Salon. "As a human citizen and also as a comedian."

That voice continues to be necessary in a world that remains stubbornly resistant to reality. With the threat of Elon Musk's acquisition of Twitter and Mark Zuckerberg ownership of both Facebook and Instagram, we may need Rainbow more than ever. His continued viral presence could be essential to resisting the privileged and powerful from the inside as they try to control their social media narratives. Anything they can do, after all — to borrow, of course, from "Annie, Get Your Gun" — he can certainly do better.

More stories from the world of Jewish comedy: