So much for "pro-choice" 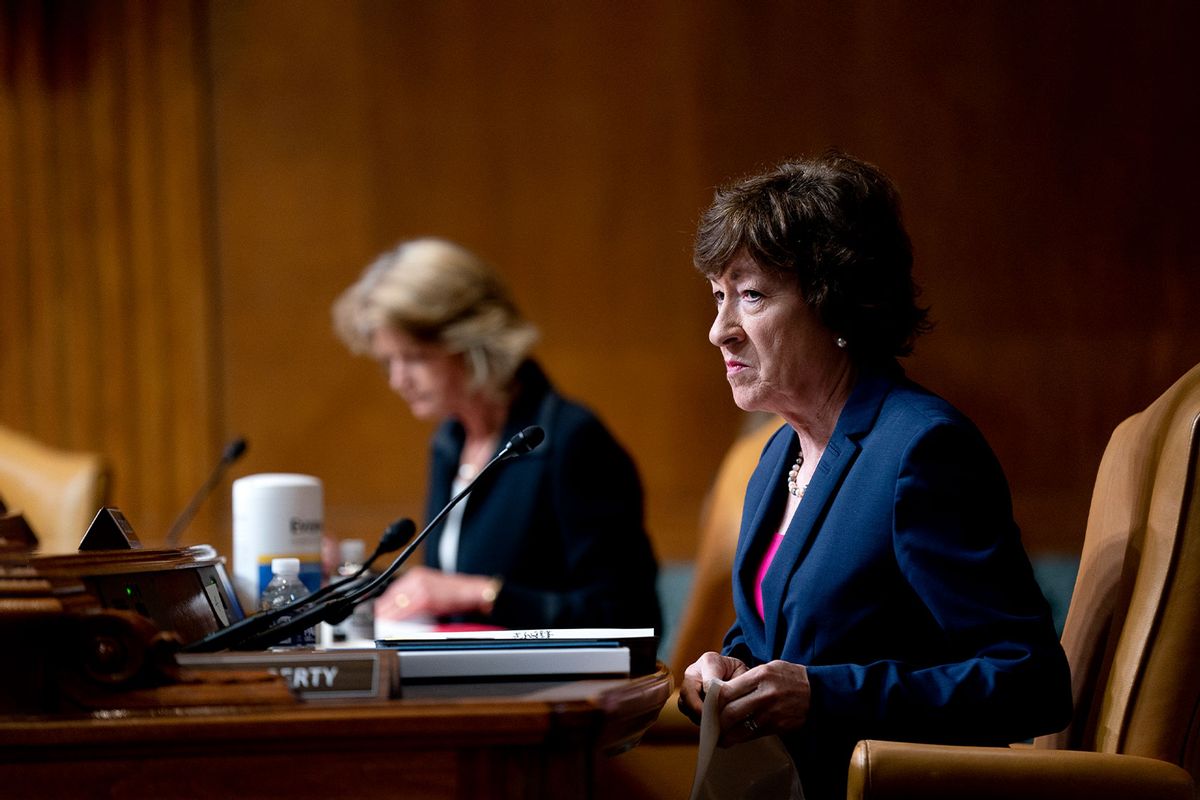 Republican Sen. Susan Collins still wants voters to believe she is pro-choice. During the hearings for Supreme Court Justice Brett Kavanaugh, Collins defended her decision to vote for the Federalist Society-linked judge by claiming to believe his assurances to her that he had no plan to overturn Roe v. Wade. In the three and a half years since, there's been a raging debate over whether she said that because she's stupid, or just a liar that knows she can't win in Maine without maintaining the illusion that she's a moderate Republican.

So she continues to insist on Kavanaugh's pro-Roe credentials, even after he cast an anti-Roe vote in 2020 with the minority of the court. Facing down a genuinely pro-choice Democratic challenger in 2020, Collins voted against confirming Justice Amy Coney Barrett. Observers noted, however, that she could get away with it because Barrett had enough votes to get confirmed anyway. Then after a draft opinion from the Supreme Court was leaked, showing that her beloved Kavanaugh was once again voting to overturn Roe, Collins insisted that it was "completely inconsistent" with what Kavanaugh told her in meetings prior to his confirmation.

Republicans used to write anti-abortion bills that had exceptions for health or for victims of rape or incest, but this new crop of abortion bans are absolutist.

I've always believed Collins isn't that big an idiot but is simply that big a liar.

Kavanaugh, after all, repeatedly lied under oath — in comically obvious ways — during his confirmation hearing. Collins rewarded him with a vote to confirm and then was rewarded handsomely for her vote with donations from the Federalist Society, money which likely helped push her over the top in her 2020 campaign. On Wednesday, she and other fake moderate Republican Sen. Lisa Murkowski of Alaska voted against the Women's Health Protection Act, which codifies Roe and recognizes abortion as a right. By taking this vote, Collins and Murkowski reveal beyond any reasonable doubt that they are not, in fact, pro-choice, even as they continue to insist otherwise on TV.

RELATED: Is the Federalist Society rewarding Susan Collins for her Kavanaugh vote with campaign cash?

Sure, Collins is still pretending that she's pro-choice despite repeatedly standing in the way of abortion rights. She put out a statement defending her vote by accusing the Democrats of designing the bill to fail. She claimed that the bill eliminates "basic conscience protections that are relied upon by health care providers who have religious objections to performing abortions."

This, like the claim to believe Kavanaugh wouldn't overturn Roe, is flat-out false. The bill only protects the right of doctors to perform abortions. It certainly doesn't require any doctor to do so. Even the most robust pro-choice activists don't want, say, an ophthalmologist in the business of providing abortions just because patients ask. And while it would be nice if there weren't any misogynist gynecologists using religion as a cover to deny women abortions, it's also for the best that such bigots aren't in the business of dealing with patients who need compassionate and safe care.

Collins also claims she plans "to continue working with my colleagues on legislation to maintain" abortion rights, citing an alternative bill she and Murkowski have written that supposedly protects abortion rights. In fact, the bill allows states to pass serious restrictions that make it hard, if not impossible, for providers to operate. If any bill is "designed to fail," it's this one Collins wrote that she knows full well will never come up for a vote.

Just a few years ago, both Murkowski and Collins were willing to be moderates in deed as well as word, voting against Donald Trump's 2017 effort to repeal Obamacare. Now they won't even stand up for a right that is supported by a strong majority of Americans. This reflects a larger shift to the right in the GOP. Those who aren't willing to go along with it face the danger of being purged. Much of the purge is centered around loyalty to Trump's Big Lie, but it's also clear that Republican politicians increasingly feel that they must toe the MAGA line in all ways — even on abortion rights — or else face losing to primary challengers that are even more far-right than they are.

RELATED: Why can't Susan Collins admit that she was wrong about Brett Kavanaugh?

Republicans used to write anti-abortion bills that had exceptions for health or for victims of rape or incest, but this new crop of abortion bans are absolutist. Republicans used to be more circumspect about their hostility to contraception access, but now are speaking more openly about plans to repeal the right to use birth control, as well. Justice Samuel Alito's leaked draft opinion really underscores how shameless the misogyny has become, as he quite literally cites a pro-rape witch-burner from the 13th century as an authority on whether women have legal rights. (He was not for the idea!) In this environment, it's no surprise that Murkowski and Collins feel their careers would be in real danger if they stood against the rabidly misogynist GOP base on the issue of abortion rights.

The whole situation is a perfect illustration of the greatest conundrum of current American politics: undemocratic election systems and high rates of voter complacency allow Republicans to be wildly overrepresented in federal power.

On the first front, the problem is simple enough. More Americans vote for Democrats, but because electoral maps favor rural and suburban areas over urban ones, Republicans win disproportionate numbers of seats. On the latter front, the issue is a little more complicated. Primary voters tend to be both more ideological than general election voters. So Republicans keep sending far-right radicals to the ballot. They then win mainly because a huge chunk of voters don't pay much attention to politics, and have no idea that they're voting for foaming-at-the-mouth MAGA radicals.

The election of Gov. Glenn Youngkin of Virginia is the most recent example of the latter phenomenon. The man is a Trumpster through and through. However, he managed to tamp down on the most rabidly fascist behaviors in public, giving Democratic Virginians an excuse to skip voting and allowing some swing voters to feel okay backing him. And sure enough, now Virginia voters are feeling betrayed by how far-right Youngkin turned out to be. Of course, this was entirely predictable if they had just paid a modicum of attention.

I've always believed Collins isn't that big an idiot but is simply that big a liar.

Collins, in particular, seems like she's trying to thread the needle by not taking actions that could alienate the MAGA base while putting on an empty pro-choice act for moderate voters. It goes a long way to explain her comically over-the-top reaction to a group of pro-choicers writing a demand that she vote for abortion rights in chalk on her sidewalk. The cops were called to deal with what Collins described as "the defacement of public property in front of our home." After having the cops called on them for "defacement" that will disappear the next time it rains, the chalkers returned to write messages reminding Collins that they also have a right to free speech.

Collins obviously does not like any kind of message that might remind her moderate voters that she is not actually pro-choice. But her reaction of trying to get the chalkers arrested speaks volumes about why she's gone full MAGA, instead of quietly retiring like so many of her more moderate Republican friends have done. Her entitled reaction echoes the same MAGA petulance that led Trump to call for shooting Black Lives Matter protesters and pushed Trump supporters to storm the Capitol rather than accept a lost election. Collins is all aboard with the power-at-any-price mentality, especially since it's other women who will have to suffer the consequences of forced childbirth.

RELATED: "Clean up your mess": Cops called to home of Sen. Susan Collins over chalk protest