Intense and insightful, Denis' new film builds empathy for the complexities of human emotion and desire 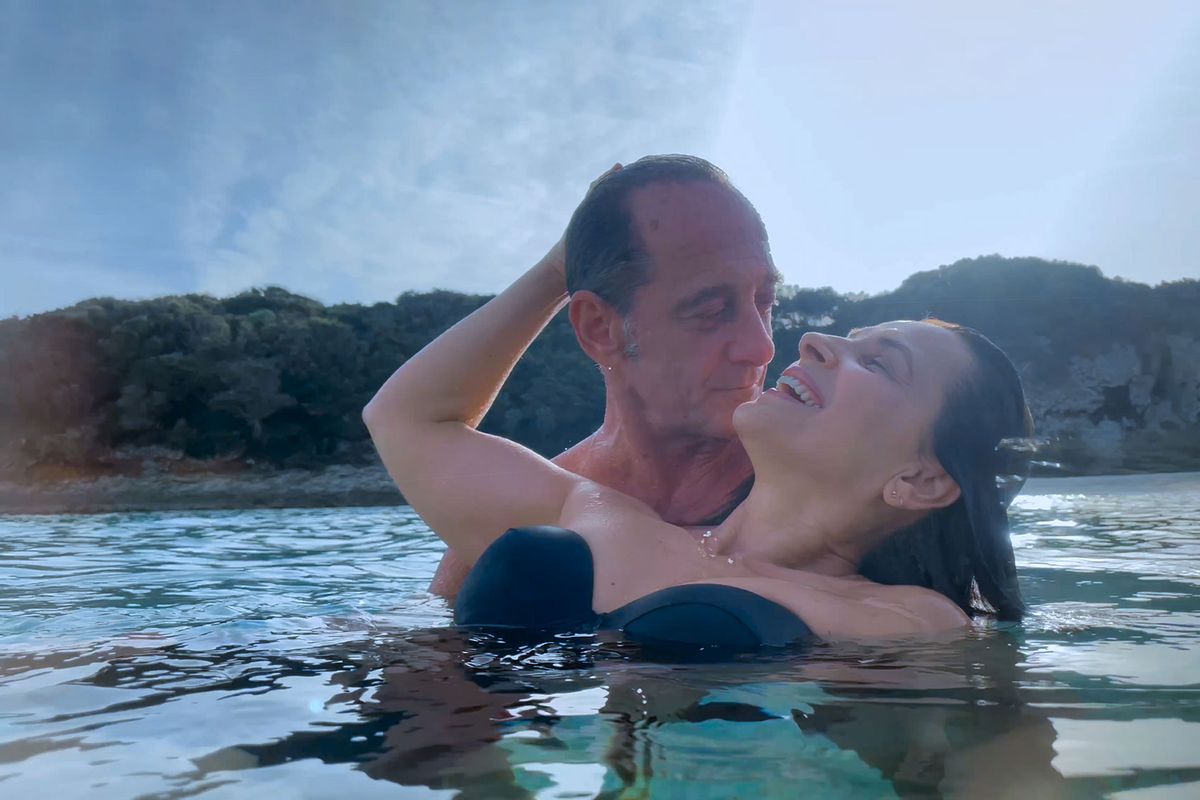 Vincent Lindon as Jean and Juliette Binoche as Sara in Claire Denis' "Both Sides of the Blade" (Courtesy of Curiosa Films. An IFC Films release)
--

Claire Denis opens her new film, "Both Sides of the Blade" (aka "Fire") with a wordless sequence featuring Sara (Juliette Binoche) and Jean (Vincent Lindon) frolicking in the water during a getaway. When they return home to their tony Paris apartment, they have sex. The love between this couple — who have been together about a decade, it is later revealed — is still very strong. And over the course of this absorbing film, that love will be tested.

"Both Sides of the Blade" spends much of its first half establishing the characters and their backstories. Sara hosts a radio program where she interviews a Lebanese woman about the country losing its lifeblood, or a West Indian man about "white thinking." It is on her way to her job one day that Sara spies François (Grégoire Colin), her former lover and Jean's friend, whom she left to be with Jean. She is struck by this unexpected sighting — François does not see her — and it causes Sara some anxiety.

"Murina" filmmaker: "You need to be a 'dangerous' woman in Croatia to survive"

As if to double down on her resolve not to reconnect with her ex, Sara tells Jean a story about how much she envied Jean's wife when she first met him. (Sara was with François at the time). "It's over between us," Sara insists about her relationship with François. But things are complicated when Jean gets a call from François asking for help starting a new agency for rugby players. (Jean used to play rugby and has an eye for talent.) Sara encourages Jean to work with François, but he is hesitant. Jean eventually relents, and it slowly drives a wedge between the couple.

Gregoire Colin as François and Juliette Binoche as Sara in Claire Denis' "Both Sides of the Blade" (Courtesy of Curiosa Films. An IFC Films release)

Much of the dramatic tension in this slow-burn drama stems from how Sara plays the ends against the middle. When Jean berates Sara for kissing François on the mouth, she claims she pulled away from him. But she also tells herself, upon reconnecting with her ex, that "love, fear, sleepless nights, the phone by the bed, getting we . . . " will all resurface after a decade of being dormant.

Binoche's performance, which is wonderfully impassioned, makes Sara's conflict feel real even if it is troubling. Her character is slippery. Is she lying to Jean? Is she contriving an affair with François? (She agrees to answer his texts). When she and François do meet up privately, she tells him, "No" when he tries to have his way with her. And as he goes off and sulks at being denied, she coaxes him back. Binoche plays out Sara's head vs. heart debate well, and she is silently expressive when she returns home to Jean after this encounter. Leaning against a wall, her eyes reveal how she processes what has happened and figures out how to move forward.

Both Binoche and Lindon convey the passion Sara and Jean have — holding hands after making love or looking at each other with deep longing. But their fights are even more revealing. When he asks to borrow her credit card, a mild spat develops. It hints at the percolating tensions between the couple. Later arguments, over the past coming back to hurt them, or the future of their relationship, are more intense and revealing. The strength of "Both Sides of the Blade" is that Denis allows viewers to understand both Jean's and Sara's positions in their fights and feel empathy.

Jean is a complex character, and Lindon, with his hangdog expression, carries the weight of a man who has struggled in life and being happy. (He seems most content doing the food shopping or buying gas). Jean has been to prison for an unspecified crime, and there is a suggestion François was involved but escaped a jail term. Jean's mother, Nelly (Bulle Ogier), has custody of Jean's son Marcus (Issa Perica), from his former marriage, and Jean is having trouble with Marcus, who is restless and hopes to quit school. Jean is plagued by his son's behavior and lectures him at length in one scene about trade school, and his possible future. It illustrates how much control Jean tries to exert over other people — a nice parallel for his relationship with Sara.

"Both Sides of the Blade" is all about control and freedom. Can these people control their emotions? Are they free to behave as they want? As the film builds to its climax, Denis keeps viewers rapt as they become deeply invested in Sara and Jean as they hurt each other and take a good hard look at their relationship. When Sara asks Jean if he believes her or François when it comes to the truth of what may (or may not) have transpired is devastating. How things play out provides the power of Denis' potent and well-acted film.

"Both Sides of the Blade" opens in theaters July 8 and VOD Aug. 23. Watch a trailer via YouTube.