In "Misery," James Caan made a writer a rock star

His Paul in "Misery" was glamorous, but the late, great actor also made him edgy and kind 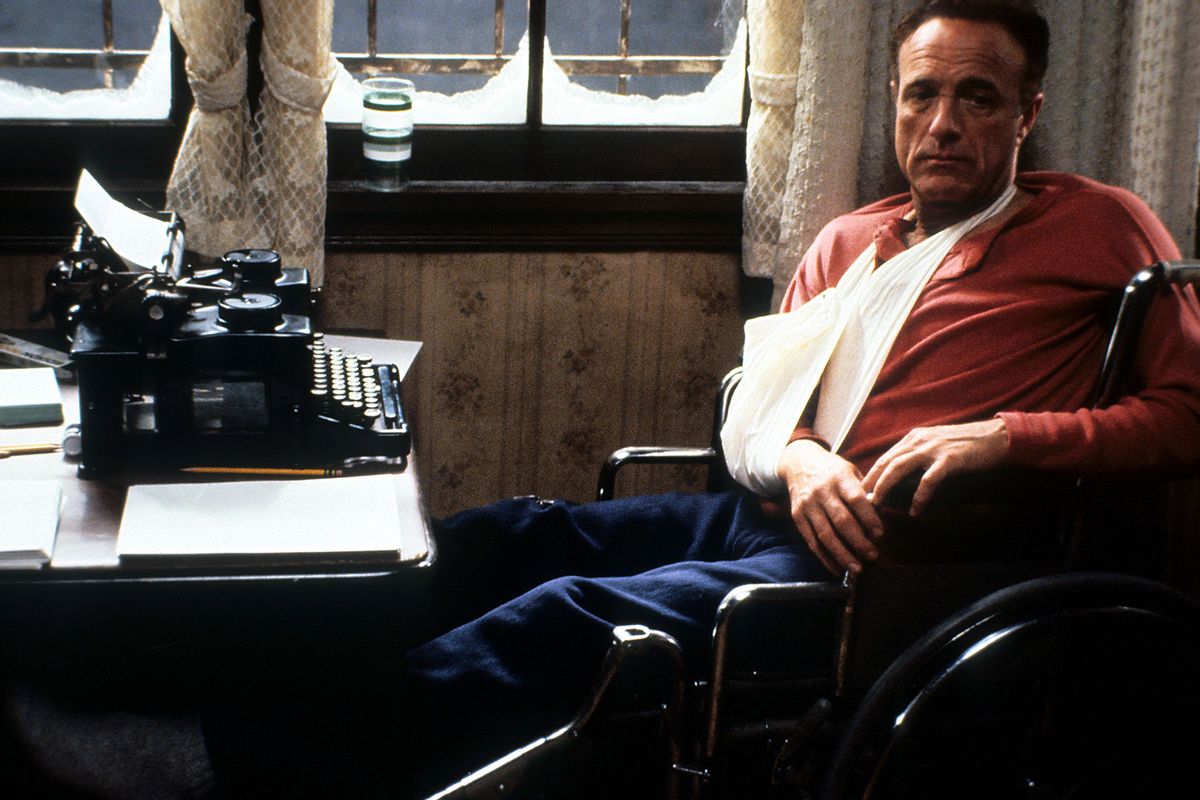 James Caan in a wheelchair in a scene from the film 'Misery', 1990 (Columbia Pictures/Getty Images)
--

The movie starts with the unmistakable clatter of typewriter keys. Beside the desk, champagne on ice, and a single cigarette and match sit at the ready. And at the keyboard: James Caan as Paul Sheldon, a famous writer about to have the worst time of his life.

Caan died on Wednesday at the age of 82. The Oscar-, Emmy- and Golden Globe-nominated actor was known for roles in "The Godfather," "Brian's Song," "Thief," and in more recent years, "Elf." But to me he'll always be Paul, the writer in Stephen King's bestselling novel turned Oscar-decorated 1990 film "Misery." To a difficult, limited role, Caan brought his trademark ruggedness. As Paul, Caan was tough and tender. He also did the unthinkable: he made writers cool.

RELATED: The art of the Caan

"Misery" centers on Paul, a highly successful novelist who's just finished the first draft of his latest book, a noted departure from his bestselling and very commercial-sounding "Misery" series, and on Annie, his self-proclaimed "No. 1 fan" (Kathy Bates). Paul has gone to a resort in the mountains of Colorado to complete his book, the same place he always goes. Once the novel's done and he celebrates briefly, he sets off in a blizzard to deliver it and return to his life.

Here's the thing about patterns: stalkers can take advantage. When Paul crashes his sports car in the snow, Annie conveniently finds him, rescues him and nurses him back to health at her remote farmhouse. But her nursing comes with a price: total devotion and a brand-new book.

These were the heady days of an author photo taking up the entire back cover of a book. Who needs a synopsis or blurbs when you have pulsing good looks?

The role of Paul was turned down by a Who's Who of notable actors, including William Hurt, Richard Dreyfuss, Robert De Niro, Al Pacino, Harrison Ford and Robert Redford. "Misery" director Rob Reiner alleged that the many movie stars who refused the role were "intimidated." Warren Beatty was also tagged for the role, but Reiner said, "When it came to the point when we were ready to do it, (Beatty) was too nervous. And he left."

It's not easy to spend most of a nearly two-hour film acting prone from a bed (which translated into 15 weeks of filming while on one's back). "Misery" also marked Caan's, its eventual leading man, return to Hollywood after taking some time away to deal with addiction. It made the film all the more perfect for him; writer King said the whole story was a metaphor for his own struggles with drugs.

Physically, Caan appeared taller than he was, with broad shoulders, a barrel chest and an energy that jumped off of his performances like sparks. The Hollywood Reporter, in their obituary, described him as the "Macho Leading Man of Hollywood." Keeping that man in a bed for weeks translated into a performance of barely contained frenzy. 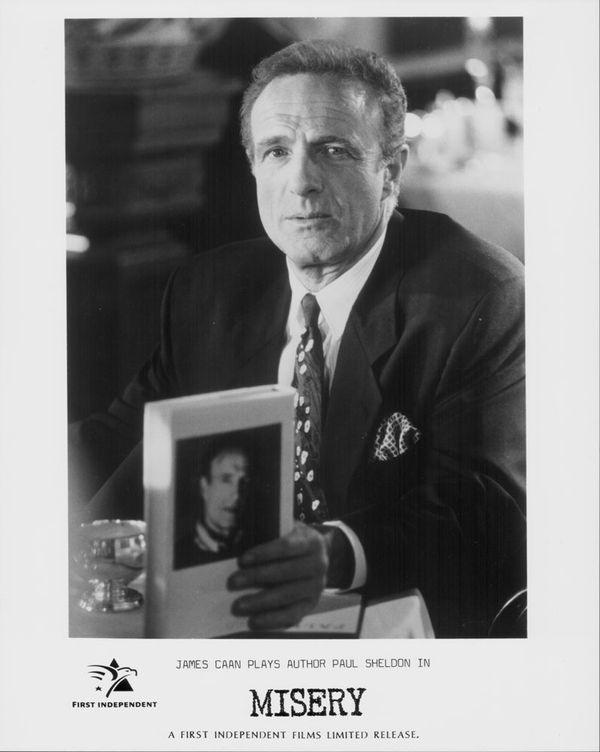 Actor James Caan in a scene from the movie 'Misery', 1990. (Stanley Bielecki Movie Collection/Getty Images)Caan had Redford's matinee idol looks. His Paul is wealthy, successful. His books are profitable enough they have paid for two houses, his agent reminds him.

The author photo on his books — which Annie has a framed version of in her living room shrine to the writer — looks like a glamour shot, more like an actor's headshot than a novelist's. These were the heady days of an author photo taking up the entire back cover of a book. Who needs a synopsis or blurbs when you have pulsing good looks?

A cool writer needs a cool agent. And that's Lauren Bacall playing the most glamorous literary agent in the world with her smoky deep voice, shoulder-padded power suit with a gold brooch and feathered '90s hair. They lunch in New York. She gives him tough love speeches. This is the dashing writer life!

Paul drives a vintage Mustang, of course. And he drives the little sports car recklessly on the snowy Colorado mountain roads. That's the confidence that Paul has, so self-assured that he's going to finish his book that he has his celebratory rituals sitting in wait next to him.

But like any good artist, Paul wants more. He has commercial acceptance, the kind most writers can only dream of, but he wants literary approval too. He wants prizes. He wants respect, not just money (in the way that only someone who has money can say). The same audacity that leads him to drive a sports car in a blizzard leads him to kill off the main character of his popular series: heroine Mercy, the moneymaker who provided those two houses — and floor seats for the Knicks.

Paul occupies that rare stratum in the book world: he's really, really popular, but he's also good. A good enough writer that the sheriff (Richard Farnsworth, who was always so heartbreakingly excellent) who picks up some of Paul's books as research when the writer goes missing, presumed dead, can't put them down. He reads them constantly. He underlines and remembers lines.

His Paul is funny, clever but not cruel, even to Annie who is very, very cruel to him. He kills her. He hurts her before that. But he never mocks her.

Is this writer character a stand-in for King? Probably. King wrote writers into many of his books, including "The Shining" and in later years, "Bag of Bones" (which is my weird favorite), but the year "Misery" was released, we didn't have any many examples of bards on screen. This was years before "Finding Forrester" or "Henry Fool;" before scribe Jughead was brooding in "Riverdale" — even before "Poetic Justice" or "Mrs. Parker and the Vicious Circle."

Paul falls into certain tropes of the writer character. He's neurotic and superstitious. He's a man, white. "Misery" is not without its misogyny. But Caan elevates the role from the page. His Paul is funny, clever but not cruel. Not cruel, even to Annie who is very, very cruel to him. He kills her; he has to survive. He hurts her before that. But he never mocks her.

"Misery" was one of the first examples of toxic fan culture, a toxicity whose poisons we continue to reckon with in stronger doses today. In the forthcoming novel "Number One Fan," Meg Elison spins this beautifully and chillingly into an updated "Misery" tale complete with sci-fi conventions, fan fiction and a woman writer kidnapped. How can you love something so much you want to hurt it, or keep it to yourself forever? If you can't have it, no one can.

But as Annie, who as it turns out, has a history of homicides, holds a dark center, Paul has an edge about him too. At the end of "Misery," as he's having intrusive, PTSD flashbacks, Paul admits to his glamorous agent, in a glamorous restaurant where he's wearing a glamorous suit, that he needed Annie.

He's patient. He remains himself, despite his captivity and the horrible things done to him (you know the ones). He doesn't pet Annie's pet pig when the friendly porcine runs up to his bedside. Paul is too cool for that. He keeps his cool, as Caan somehow kept his energetic, kinetic self contained in Paul's injured body for weeks.

Caan kept the typewriter from the film too, as a souvenir. His co-star Bates, who won an Oscar for her work as Annie, said in a remembrance: "Working with him on 'Misery' was one of the most profound experiences of my career. When you watch his performance, his terror, it's as though he's watching a snake. Brilliant."

He kept the typewriter; she kept the sledgehammer. In an interview the two did together in 2015, Caan asked her: "You want to trade?"