Trump's inner turmoil: He craves credit for January 6 — but can't admit it for fear of prison 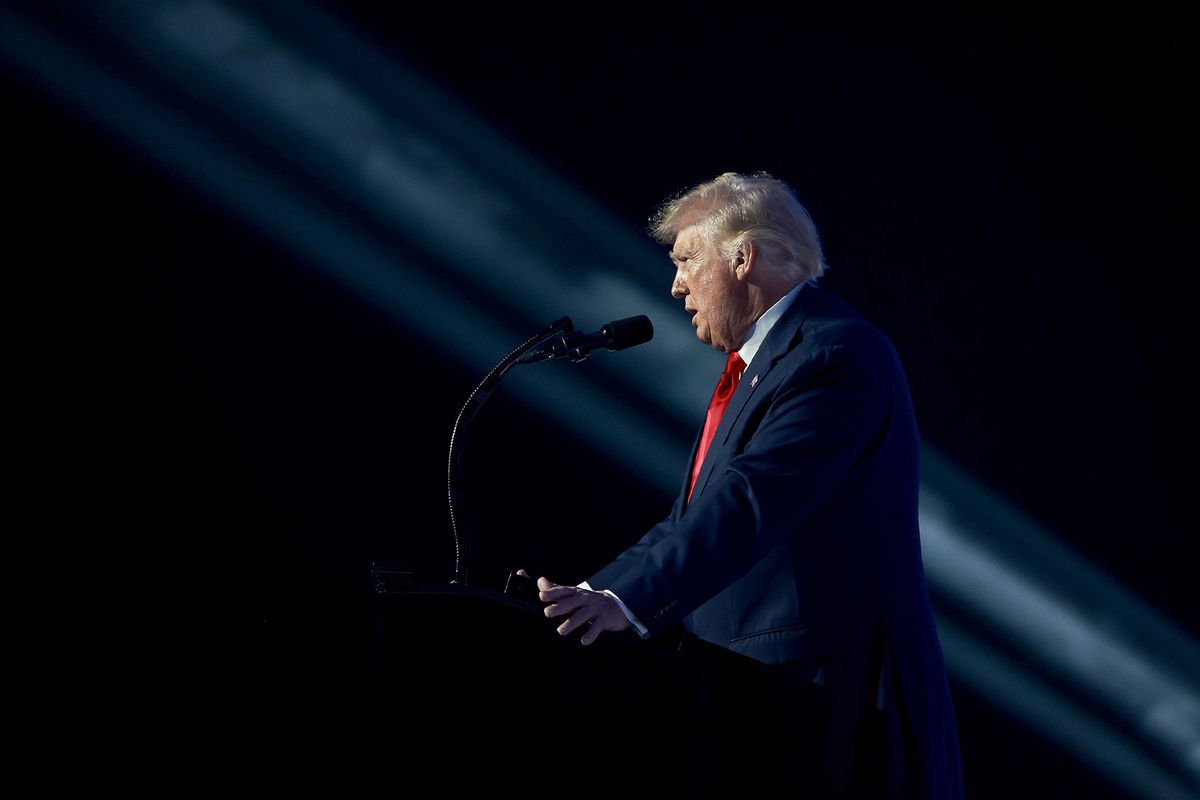 The video didn't have a clip of Donald Trump complaining about how he can't pronounce "yesterday" in it, but nonetheless, it's worth paying attention to it. On Monday, January 6 committee member Rep. Elaine Luria, D-Va., posted a video indicating that, even when he wasn't mispronouncing common words, Trump spent the day after the Capitol insurrection focused on finding that sweet spot between continuing to encourage domestic terrorism and not risking criminal exposure for doing so.

It took more than 24 hours for President Trump to address the nation again after his Rose Garden video on January 6th in which he affectionately told his followers to go home in peace.

There were more things he was unwilling to say. pic.twitter.com/cJBIX5ROxs

As hinted at by the deposed witnesses in the video, including both Ivanka Trump and Jared Kushner, one of the major reasons that his staff and family were pushing Trump to give a speech denouncing the Capitol riot on January 7, 2021 was to keep him out of legal trouble. Any fool could tell, from Trump's inciting speech and his extreme reluctance to call off the rioters, that Trump wanted the violence that day and was thrilled that his plans for an insurrection had gone as well as they had. But having him offer a statement, however reluctantly, claiming that he was appalled by the violence was a necessary step to constructing a legal and political defense. It was about having a document Trump's lawyers could point to when arguing (falsely) that Trump didn't mean for the riot to happen and that he was unaware of the effect his words would have.

The problem is that Trump's desire to stay out of jail was in direct conflict with another guiding Trump impulse: to gloat about the violence he inflicted on Congress and take full credit for unleashing the Capitol insurrection.

The inner battle between Trump's desire to evade legal consequences and his longing to yell "yeah I did it" was amply displayed in the "blooper reel" that the House committee investigating January 6 shared on Thursday night. While most of the public discussion about the video was mocking Trump for not wanting to say "yesterday," what is really most crucial is his unwillingness to either admit the election was over or to call for legal consequences for the rioters he sent to the Capitol.

Jan. 6 committee releases blooper reel of Trumps attempts to record a statement on Jan. 6.
"I don't want to say the election is over"
"Yesterday is a hard word for me" pic.twitter.com/OrY6CUt0vp

But the video Luria released Monday gives even more crucial context. It really underscores how much Trump was being pressured by his staff to release a video for purely legal reasons. No one seems to believe Trump felt anything but glee over the chaos he caused. No, the post-riot condemnation was ass-covering, pure and simple. But Trump, who lies about everything all the time, was struggling to pretend to feel anything but joy over the riot. Distancing himself from the rioters meant he couldn't take credit for the insurrection, and that was clearly bumming him out.

Not only is Trump not sorry about January 6, he'd be happy to do it again.

That's why the still shot of how much ink Trump spilled over the remarks, in an attempt to take out any language that sounded too sorry about what happened, is such crucial evidence. 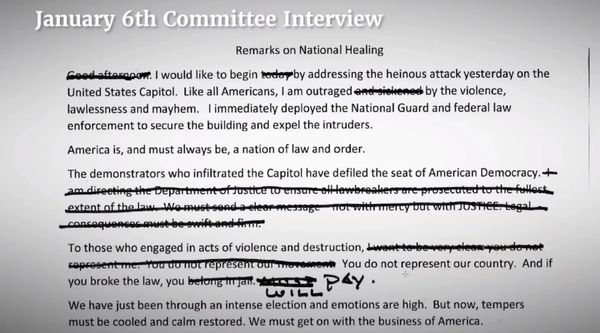 Particularly noteworthy is how reluctant Trump was to say that the rioters don't represent him. Because, of course, he wants the whole world to know that they do represent him. For someone as narcissistic as Trump, being able to convince so many people to risk their jobs, families and freedom on his behalf must be quite exciting. Not being able to brag about Jan. 6 must be incredibly painful for Trump.

This story, however, is about a lot more than Trump's ego. It's about the ongoing threat of right-wing domestic terrorism, and how Trump's antics after the Capitol insurrection created a roadmap for other Republican politicians and GOP propagandists to dial up the violent rhetoric. It's not a surprise, in retrospect, that Trump was reluctant to condemn the rioters too harshly. This is the same man who told the Proud Boys to be on "stand by" for him during a 2020 presidential debate. His behavior since he left office indicates that Trump's affection for political violence has not dimmed. Worse, it's spreading throughout the GOP.

Not being able to brag about Jan. 6 must be incredibly painful for Trump.

Salon's Chauncey DeVega has been doing the thankless work of tracking Trump's rhetoric on his app Truth Social and during his rallies. Taken together, DeVega outlines that a clear message is being sent to Trump's followers: Not only is Trump not sorry about January 6, he'd be happy to do it again.

Trump endorsed a post on Truth Social calling for "civil war" in response to the supposed enemy "within."  This was right after a mass shooter in Buffalo, New York opened fire on mostly Black customers in a grocery store, having been hyped up on the racist "great replacement" conspiracy theory that Trump also likes to hint at. Trump has also really amped up the white nationalist rhetoric, unsubtly gesturing towards the eliminationism that such views always logically point to by arguing that "this nation does not belong" to "corrupt radicals," which is Trumpian code for American citizens who aren't part of the right-wing tribe.

Over the winter, Trump pounced on another violence-stoking opportunity by joining in the Fox News frenzy over the anti-vaccine "trucker" protest in Ottawa, Canada's capital. For weeks, the pundits on Fox hyped the protest and openly longed for violence to break out between the protesters and Canadian law enforcement. Trump himself joined in on the fray with one of his usual threats disguised as a "warning," telling Fox host Sean Hannity, "You can push people so far and our country is a tinderbox too, don't kid yourself." He used the word "tinderbox" repeatedly, understandably believing his followers might not pick up on his hint the first time.

Trump has also taken multiple opportunities to hint to his followers about his true feelings of pride and joy over January 6.

He floated the idea of pardoning the rioters at one rally. He's tried to turn Ashli Babbitt, the insurrectionist who was shot to prevent her from leading a mob to chase down fleeing members of Congress, into a martyr. He's claimed the people arrested for rioting that day are "being persecuted so unfairly." When asked about the people who were chanting "hang Mike Pence," he publicly defended them by saying it was "common sense" and they were "very angry." Trump's supporters, like most of us, know to ignore the condemnations of the insurrection as mere ass-covering language. They know that these other statements reflect his true feelings of approval for political violence.

Trump may not know that injecting bleach into your lungs will kill you, but he sure does have a strong grasp of how to signal violent intent to his followers while maintaining plausible deniability to law enforcement.

Malcolm Nance on the Trump insurgency: Jan. 6 was a "template to do it correctly next time"

Unfortunately, the signals he's sending are spreading to other Republican politicians. As I noted yesterday, Dave Weigel of the Washington Post published a piece worth reading in full that really shows how normal this "civil war" talk has become among Republican candidates on the campaign trail. The Republican candidate for attorney general in Maryland, Michael Peroutka, routinely describes Democrats as foreign enemies and recommends that "the Second Amendment" is a good response to Black Lives Matter protests. As Weigel writes:

That argument has been dramatized in ads that, for instance, show one armed candidate appearing to charge into the home of a political enemy, and another warning of "the mob" that threatens ordinary Americans. In many cases the candidates are brandishing firearms while threatening harm to liberals or other enemies.

In central Florida, U.S. Army veteran Cory Mills has run ads about his company selling tear gas that was used to quell riots in 2020. "You may have seen some of our work," he says, introducing a montage of what are labeled "antifa," "radical left" and "Black Lives Matter" protesters running from the gas.

There are too many other examples to recount here, but the gist is clear: January 6 was, for Trump and his most adamant allies in the GOP, not the end of the political violence but an excuse to ramp up the inciting rhetoric.

As intelligence analyst Malcolm Nance told DeVega this week at Salon, the "attack on the Capitol was really a template for the right-wing to do it correctly next time." It's unlikely that it will play out exactly the same way, of course. But Nance is right. Trump is encouraging his supporters to be at the ready should he call for violence again.