"Susie Searches": A cautionary tale of a podcaster who finds a missing student & "insta-celebrity" 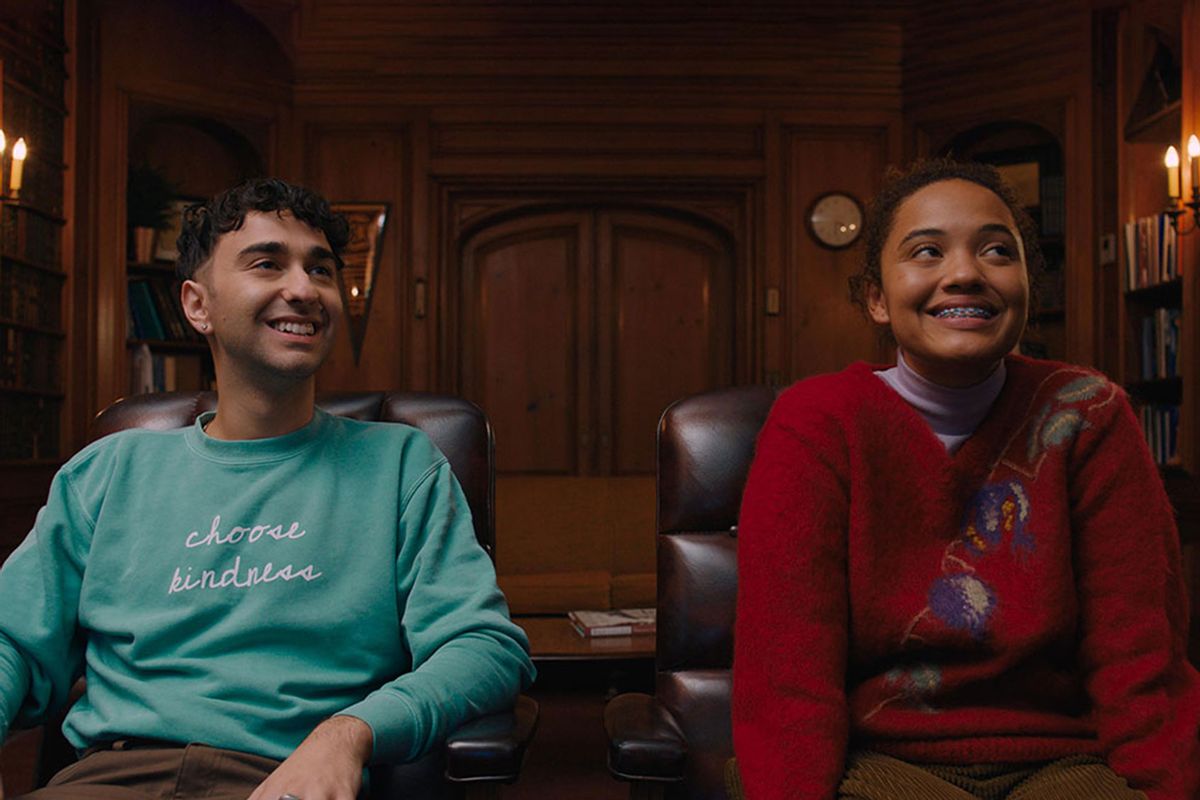 There is more than meets the eye with "Susie Searches," director Sophie Kargman's darkly comic thriller that received its world premiere at the Toronto Film Festival this week. Expanded from the director's short, this sly film has the titular true-crime podcaster (Kiersey Clemons) skyrocketing to fame when she finds her kidnapped classmate, Jesse (Alex Wolff), before the local Sheriff (Jim Gaffigan) does. But even as Jesse and Susie bond over this rescue, one big question remains: whodunit?

"I like the collective nature of podcasts . . . and that collective experience makes us feel less alone."

Kargman's film is not so much about the who as it is about the why, and as the story takes twists and turns, as bodies pile up, viewers will appreciate puzzling out the clues and red herrings.

Clemons proves to be a feisty heroine whose invisibility in the eyes of others may be her secret weapon. As she investigates and reaps the rewards of being such a good sleuth, she gains the attention she desires. How she handles her new-found success, however, is at the heart of Kargman's film.

The director chatted during the festival about the appeal of true crime podcasts, our toxic social media culture and making "Susie Searches."

I would say my special talent is my persistence. My production company is called Relentless Escargot. I think it's a talent to be able to not take obstacles as true obstacles, or nos as nos. This industry is built on rejection and certainly not for the weak of spirit or heart. People say if there's any other job to have — do that. The only way to be in the industry is if you really love it. My ability to persevere in the face of obstacles or adversity is something I'm proud of. I've always seen rejection or the word "No" as just a word. If it's not for this person, it will be for someone else. You have to be able to pivot, and if something isn't immediately presenting itself, then you go in another direction and find another road.

Your film joins "Only Murders in the Building" and the recent film "Vengeance" in that it features amateur sleuths who host true-crime podcasts. What is the appeal of this genre? Why are we so fascinated by crime stories and listening or making podcasts about them?

"It's more interesting knowing that there is a bomb."

Truth is always stranger than fiction You hear these stories, and think, Whoa! There's some zeitgeist-y idea that it could happen to us. I like the collective nature of podcasts and that there are a number of them available at our fingertips for any specific interest to anyone. It's exciting, and that collective experience makes us feel less alone. When you are making entertainment, you want to make something that taps into something universal. I think podcasts do that. True crime is really topical.

What podcasts do you listen to?

When we were writing it, "S-Town" was my favorite true-crime podcast of the most recent years. But as of late, I'm only listening to the "Team Deakins" podcast, which is on filmmaking. Roger Deakins does it with his wife. It changed my life.

The film has a very interesting tone. It's deadpan funny in parts but there is also tension when Susie investigates. How did you approach the material?

Tonally, I think it's in the vein of "Election" or "To Die For." I love dark comedic thrillers or mysteries. It's a unique and tricky tone that isn't done that often. That was always the intention. Some people when we were sending it asked, Is it a dark comedy or a thriller? Pick a lane. Why do I have to pick a lane? It's both. You can have a dark comedy thriller. It's a unique genre. "I, Tonya" is also in the same vein. I wanted to make a movie that made you laugh and nervous and scared and nervous and scared to laugh. I love all types of film, but for "Susie Searches" I wanted to make something that was an elevated genre film that was both commercial and a detailed character study about our society's fixation on the need for love and validation.

Without giving anything away, you reveal the kidnapper early on. Can you discuss why you decided to do that?

It was like Hitchcock's discussion of suspense and surprise when two people are having a conversation and there is a bomb under the table. It's more interesting knowing that there is a bomb. You look for those small nuances of a glint of an eye or intake of breath and watching their movement in a different way. If you don't know until the end, you miss that. There's something that brings you in.

In the short film, the reveal happens at the end. When Will, my cocreator and writer, and I were crafting the beats of the feature, we didn't want to prolong hiding the identity of the kidnapper.

That is what folks might expect. The goal is to find out what is going to happen. I like films that open up a world or feature complicated characters I don't understand and teach me something or make me more empathetic. I make movies to make people more compassionate

What are you saying, directly or indirectly, about our need to be seen all the time? You celebrate and satirize our social media culture in "Susie Searches."

"Susie" is a cautionary tale about the toxicity and need for insta-celebrity. If we are not careful, we can become this.

The film features a young Black woman, who is often seen as invisible and treated poorly, especially by the local police. "Susie Searches" never addresses issues of race, but the microaggressions are implied. Your short featured a white Susie. Can you talk about the issue of race in the film, or the lack of a discussion about race?

It's more a question for Kiersey. For me, when I was casting, I was looking at everyone. I played the role in the short. I wanted the best actress for the role in the feature and Kiersey was that. She had emotional dexterity. I didn't have an idea of what this character looked like. It was much more important for me to find the right actress.

One of the characters says that people wear masks, hiding who they really are. In this respect, "Susie Searches" is about identity, and how well we know folks. This is also a topic in your short "Query." How are you commenting on this idea in your films?

If there is one underlining theme in all of my work, it is taking one thing and flipping it on its head. That's a commonality between "Susie" and "Query." Humans can be multiple things all at once, and that idea of challenging preconceived notions is exciting. That's allows for complicated storytelling and interesting, textural, complicated people. I pride myself on making characters who are multifaceted. Even the small characters feel rich, they have their own arcs.

This is your first feature film after two shorts and working as an actress for a decade. What thoughts do you have about your career and are you going to pursue this kind of work in the future?

Once I started directing, I found the place I want to be. That isn't to say I won't act any more but directing is really my purpose.