"This film is Poe's origin story": "The Pale Blue Eye" director on his gothic whodunit at West Point 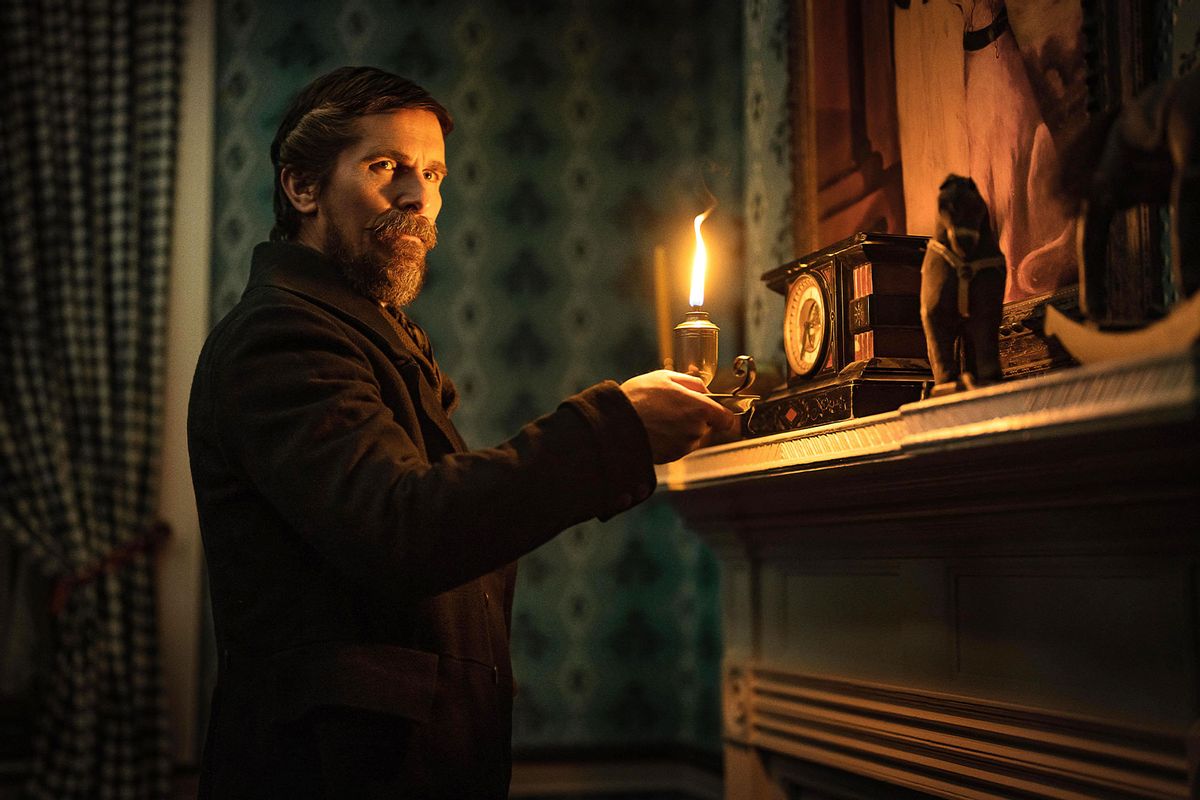 Netflix's "The Pale Blue Eye" is an intriguing mystery set at West Point in 1830. Augustus Landor (Christian Bale) is asked by Captain Hitchcock (Simon McBurney) to investigate the death of a cadet named Frye, who has hanged himself. The odd thing is, however, that his corpse was violated — the cadet's heart was stolen. The U.S. Military Academy would like this matter, which could possibly be murder, resolved before things get out of hand.

"It's quite tricky to make a film about Edgar Allen Poe at this time in his life, because most readers have him in mind as someone who is very dark and deeply invested in the trappings of macabre."

Landor is aided by a most unlikely assistant, that of Cadet E. A. Poe (Harry Melling), a poet who has a keen sense of observation. Poe helps Landor decipher a scrap of a letter found on Frye's corpse, hoping it will provide a clue to his death. As the mystery deepens, Landor and Poe encounter some uncanny things best left for viewers to discover.

Writer/Director Scott Cooper films this adaptation of Louis Bayard's novel as a slow burn that features some interesting twists and gothic elements. He reteams with Bale for a third time after "Out of the Furnace" and "Hostiles." Cooper spoke with Salon about his atmospheric new film, his love of Edgar Allan Poe, as well as creating a mystery about the ambiguous line between life and death.

Cozy up to "Glass Onion," the droll "Knives Out" sequel that delivers all the murder mystery goods

Let's start with a question about Poe and your interest in him, as well as the gothic genre. What is the appeal of this poet, and by extension, this work?

There was lots of Poe in my house. And at a young age, I liked how Poe transported me to places both geographically and psychologically that were very different than my home in Virginia. After my first film, "Crazy Heart," my father turned me on to Louis Bayard's novel, "The Pale Blue Eye," and he said I think this is so clever that Edgar Allen Poe is at the center of a detective story. It was meant to be read for pleasure, but I thought it would make a really interesting film. I wrote a screenplay that laid fallow for 10-11 years while I went off to make five other movies. Christian Bale and I had worked together several times, and I thought Bale is aging perfectly into Augustus Landor. He read the screenplay and off we went. My love for Poe goes back to my youth, but I will say it's quite tricky to make a film about Edgar Allen Poe at this time in his life, because most readers have him in mind as someone who is very dark and deeply invested in the trappings of macabre. He is obsessed with the occult and the satanic and where life ends, and death begins, grief and loss, ideas that course through our narrative. It is dangerous because people have an idea of Poe based on his later works, and not who he is as young man. He was witty and warm, and generous and this film is Poe's origin story. The events that took place in this narrative lead him to become the godfather of detective and horror fiction.

What were you aims in telling this story, which has many different elements?

"No one in the story is who they appear to be."

When I set out to make the movie, which kind of departs from Bayard's novel, I wanted it to be a whodunit. I wanted it to be a father/son love story of this aging constable who has suffered a great deal of loss and is living on the margins of society as well as a young cadet who is poetic and romantic and, unlike the other cadets, lived by a code and a rigorous lifestyle set by the military, and of course, I wanted it to be a Poe origin story all wrapped into something that hopefully feels gothic and transportive.

Can you talk about how you approach telling a mystery, dropping clues visually, or creating tension between the characters or misdirection as information is revealed or withheld?

The idea is that no one in the story is who they appear to be. Most everyone is living behind this veil, and they aren't showing who they truly are. Poe ends up being the most sincere of all of them. He's vulnerable, open and giving, and cares for Landor and cares for Landor's missing daughter and deceased wife. He falls in love with Lea (Lucy Boynton). He has a lot to give. There is sincerity in Melling's portrayal. That has to be parsed out carefully, like the clues of the whodunit. Landor and the Marquis family — the doctor (Toby Jones) and his wife (Gillian Anderson) — these are eccentric people. Upon a second viewing, you can see we lay out all the breadcrumbs.

The film considers themes of revenge and justice. What do you think a work of historical fiction like this says to contemporary society?

If you look at the film "Payback" and the "Taken" series, these are men avenging the loss of loved ones. If you can apply that to the 1830 and Edgar Allan Poe, it's quite delicious. Here you have a man who is meting out justice and who has solved some of the most unsolvable and grisly crimes. But I think people can see avenging the death of a loved one as motivation. Christian says our three movies together are about ethical revenge. 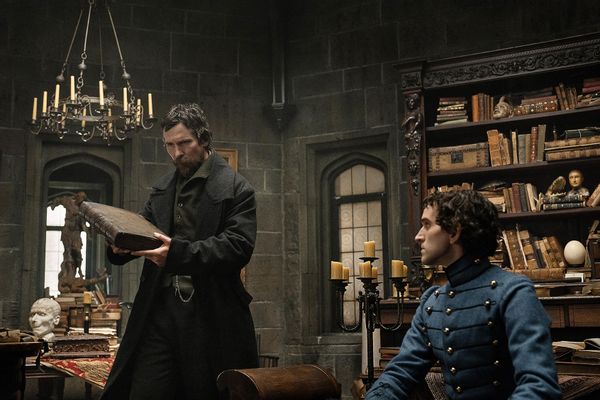 A theme in much of your work is how characters push themselves to the limit in a quest for truth and in many cases confront difficult truths in the process. What are your thoughts on that topic?

"I think people can see avenging the death of a loved one as motivation. Christian says our three movies together are about ethical revenge."

I think those themes coursing through my work now is more relevant than ever, given the society we find ourselves in unfortunately. We are living in quite fraught times. Post-pandemic — if we can call it that, I'm not sure we can — we are in fraught times and there is a great deal of animosity toward the other, whoever the other is, and that is not just political, and not just in the United States. We're seeing it in Iran and in the Ukraine. When I set out to make a film, I think of putting ordinary characters in extraordinary circumstances.

Most of the film is a slow burn, but there are a few moments of suspense. Can you talk about how you made a "horror" film that has very little bloodletting, maybe one jump scare, but still a very intense scene involving fire? This is far more of a psychological thriller than a film about a psycho killer.

One thing I want the audience to know is that it's not a horror film. Even though Poe bequeathed to us detective and horror fiction, it's the events placed upon character that are horrific. Four characters meet their death far too young. There is a missing daughter. Poe is having near-death experiences. It's not jump scares and ghouls and goblins and vampires meting out justice or horrific events. It's horror in terms of what happens in the internal struggle of the characters. Its horrific in that way and in the way that Poe approaches his work, whether it is "The Murders in the Rue Morgue," or one of my favorite short stories, "The Premature Burial," or "The Tell-Tale Heart." It's much more psychological and revealed more slowly, which appeals to me. It is also really character-driven; the characters ultimately have horrific episodes that play out in their lives. If you are going to see this movie as a horror film, you will be disappointed.

The film has a steely look and is very heavy on the blue and gray palette. How did you create the film's tone, which is chilly and at times quite foreboding and atmospheric?

That was really important. We were shooting in incredibly inhospitable conditions. It was -8 or -4 degrees Fahrenheit. When I first set out to talk about the film visually with my cinematographer Masanobu Takayanagi and my production designer Stefania Cella we talked about Caspar David Friedrich, the great German artist who allowed nature to come into his frames in quite imposing ways. We also talked about the interiors feeling like "Barry Lyndon," all lit by natural candlelight. We wanted a controlled palette of blue and gray and black and tried to remove any green. We wanted the film to feel like something that Poe knows well, which is death. The landscape doesn't feel alive. The cold, gray of West Point, the blue of their uniforms, all of these tones hopefully transports the audience along with the atmospherics, back to 1830 in a way that doesn't feel artificial. When I often watch period pictures, I feel I am seeing actors playing dress up. I like to remove the production design and costume and camera, so character, location, and atmosphere come to fore and in this instance, I wanted to feel suffocating. Almost a color film in black and white. Monochromatic tone serves the gothic in a way that isn't heavy-handed.

The film opens with a quote about the ambiguous line between life and death. Not to spoil things, but there is an element of the supernatural at work in the story. Do you believe in the uncanny and the occult?

I believe that there are inexplicable things that inform our lives in ways that we might not want to face. That particular quote comes from Poe's "The Premature Burial," and it sets the tone for our film where we are not quite sure where life ends and death begins. And that is something he wrote about quite often. I like to think when one passes on to the next frontier that there is something else. I like to keep alive this notion of the inexplicable. In 1830, they believe in the occult because there were so many things science had not caught up with and they didn't know how to explain these events and occurrences. They could only chalk it up to something that was inexplicable, or the supernatural. I don't believe it as much as Poe or the people in the narrative do, but I like to think that which remains unexplained is mysterious, and interesting, and certainly requires further experimentation.

There is a line "with enough patience, the suspect will interrogate himself." What can you reveal about your methods?

That, of course, was not in the novel. But when I set out to write and direct and produce a film, I don't want my fingerprints on the movie. Whether it is production design, camera, costumes and certainly performances, I don't want it to feel like the director is leading with who he or she is. I want the audience to completely surrender to the story, and the moments that interplay between performers as the narrative is unfolding. At the end of the story, you say, "Oh, that was directed by Scott Cooper. What else has he done?" and you look that up. Ultimately, the film isn't about me, it's about my collaborators, and more importantly it's about the audience. My sources and the way I reveal myself, hopefully, is quite subtle and invisible. If people recognize anything in my films, it's a deep humanity. As long as people can see themselves in my work, then I will have done my job.