Why I love my unitaskers (with apologies to Alton Brown)

Who says multitaskers are better? In an uncertain summer, my blowtorch got me through 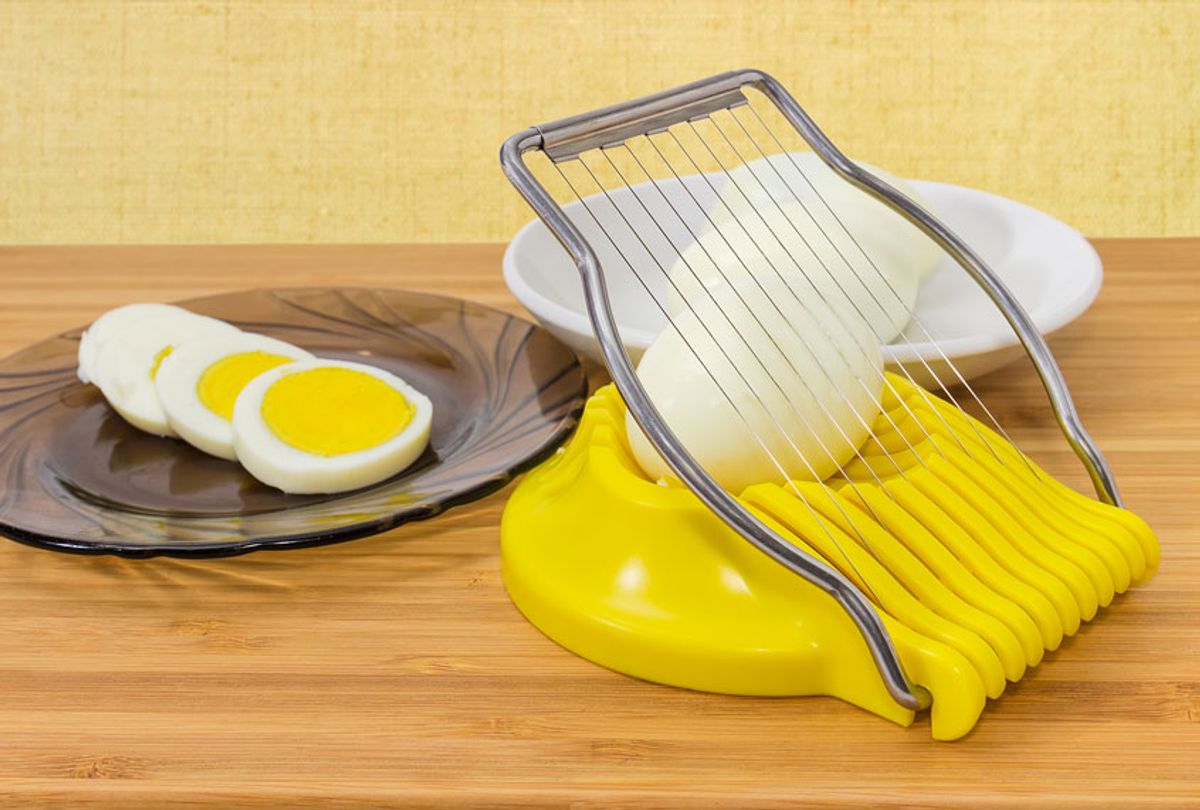 Egg slicer with egg in it, sliced and whole peeled boiled eggs on a different saucers on a wooden bamboo surface at selective focus (Getty Images)
--

The past few months have really changed me. For example, I own a blowtorch now.

Granted, it's a tiny little guy. It sits in a nondescript kitchen drawer, along with a battery-operated milk frother, two differently sized cookie scoops and two Japanese pancake rings. Clearly, once I decided to become a full time disappointment to Alton Brown, I went all in. I regret nothing!

Among his numerous achievements, the television host and cookbook author is credited with igniting a public distaste for what he famously dubs unitaskers. "There is absolutely no reason for a garlic press to exist," he once decreed. "It is utterly completely magnificently useless." And in a hilariously curmudgeonly clip from 2015, the "Good Eats" star dismantled the case for strawberry slicers, meat shredders and egg cookers. For those of us who worship in the church of Alton, his rage felt cleansing. We all had a self-satisfied laugh over those banana slicer reviews on Amazon, didn't we?

As someone whose kitchen is definitely smaller than your closet, I prided myself on my efficient, minimalist but still joy-sparking array of tools. I have a beautiful Le Creuset dutch oven I bought at a flea market when I was fresh out of college. There's a cast iron skillet I use every day. My trusty Pyrex measuring cup and compact digital scale. Three sheet pans. One pie plate. If I can't make it with what I've got, I don't even want to make it.

But as often happens with a philosophy, it can get taken too far by its own acolytes, turning freedom into self-imposed tyranny. After Brown canceled the garlic press, I found myself in a grudging relationship with my own, even though it had served me just fine for years. Every time I reached for my Zylyss Susi 3, I felt it mocking me, taunting me that real cooks don't need such gadgets.

Other, more whimsical items similarly lost their luster. I have a popover pan. I make popovers. I love them, they're always a hit. But one pan, for one occasional side dish? That's got to be wrong. Ditto my sets of oddly-sized measuring cups and spoons, gifted by a thoughtful friend years ago. I am flummoxed by the simplest mathematical tasks, and they've saved my sanity every time I've made recipe calling for three-quarters of a measure of anything. Yet wouldn't a competent cook be able to breeze through making a double portion of cookie dough with conventional tools? Isn't it shameful enough not using a scale, set to grams, of course, for everything? That collapsible salad spinner. I mean, who's that lazy about their arugula? And the rice cooker? What, a pot isn't good enough for you, your highness?

That all changed sometime in April. It wasn't too long into being stuck at home — and with it those three meals a day, seven days a week — that I decided I was going to need a lot more novelty in my kitchen if I was going to be able to face it another minute. It started with the blowtorch.

I am not a regular creme brûlée maker. No one in my family shares my fondness for puddings of any form, and I have never been forgiven for trying to serve tapioca once, during the Obama years. But I've longed for a kitchen blowtorch forever, in the way that someone who should probably develop some other interests longs for kitchen blowtorches, to toast marshmallows, to caramelize a sprinkle of sugar on fruit, to brown every bubbly bit of cheese on pasta. And now I own one and I do all those things and anyone who says money can't buy happiness doesn't own a blowtorch.

That blowtorch, it turned out, was a gateway drug. I already had a small espresso maker; wouldn't life be nicer with cappuccinos, especially when getting coffee out was still not an option? It is! Thanks, MilkPro frother! I dug out my dust-gathering ice cream maker and churned up some frozen yogurt. Then, for the biggest splurge of all, I got a pasta roller and cutter. (I looked upon the purchase as the theater tickets I wasn't going to be buying.) And let me tell you, the hands down happiest day of my summer was the afternoon, not long after my stepfather died suddenly, that I spent listening to Nino Rota and making fettuccini.

Now I love all my unitaskers. I love all my things that do one thing. I am this close to getting a vegetable spiralizer, because maybe I just want my zucchini to be more fun and I don't need any other reason than that. I think my grandmother, whose egg slicer was always in heavy rotation and who never thought to be embarrassed about it, would be pleased.

I still believe in the principles of owning things that are built to last and work well — my Lodge pan was certainly a better investment than I imagine a bacon maker would be. I still hate clutter and I don't like wasting money, which is all I think Brown was originally getting at. It's not about grim rigidity or frantic multitasking. Brown has used a blowtorch himself. He approves of rice cookers. He isn't even as down on garlic presses as his fearsome reputation might lead one to think.

Somewhere along the way, I became attached to a kind of brisk efficiency at the expense of ease and occasional frivolity. I worried that if I couldn't win the hypothetical court of "Justify that cookie cutter!" I wasn't clever; I wasn't somehow capable. I guess I feared becoming a unitasker myself.

I have done nothing but spin metaphoric and sometimes literal plates my whole adult life. I have fully adhered to the notion that the more you do, the better a person you are. I have bragged of how exhausted I am, because what modern person would even aim at being relaxed? Better to be an Instant Pot than a tea kettle, right? Lately, though, I have been trying to change. I've aimed to believe — as author Celeste Headlee as so beautifully expressed — in the power of scaling back and resisting the damaging siren call of multitasking.

Everything is overwhelming, every day, and I'll take anything that makes it even a little better. So my garlic press and I have made up. To hell with what people may say about us; we belong together. It's reminded me that if there's anything that needs to be kicked out of my kitchen, it's guilt and shame and self-doubt. So from here on in, I'm just going to try to emulate my unitaskers, and be the tea kettle I want to see in the world.