Treat yourself to a four-ingredient, single-serving s'mores milkshake this summer

Whether you're alone or wish you were, it's time to shake things up 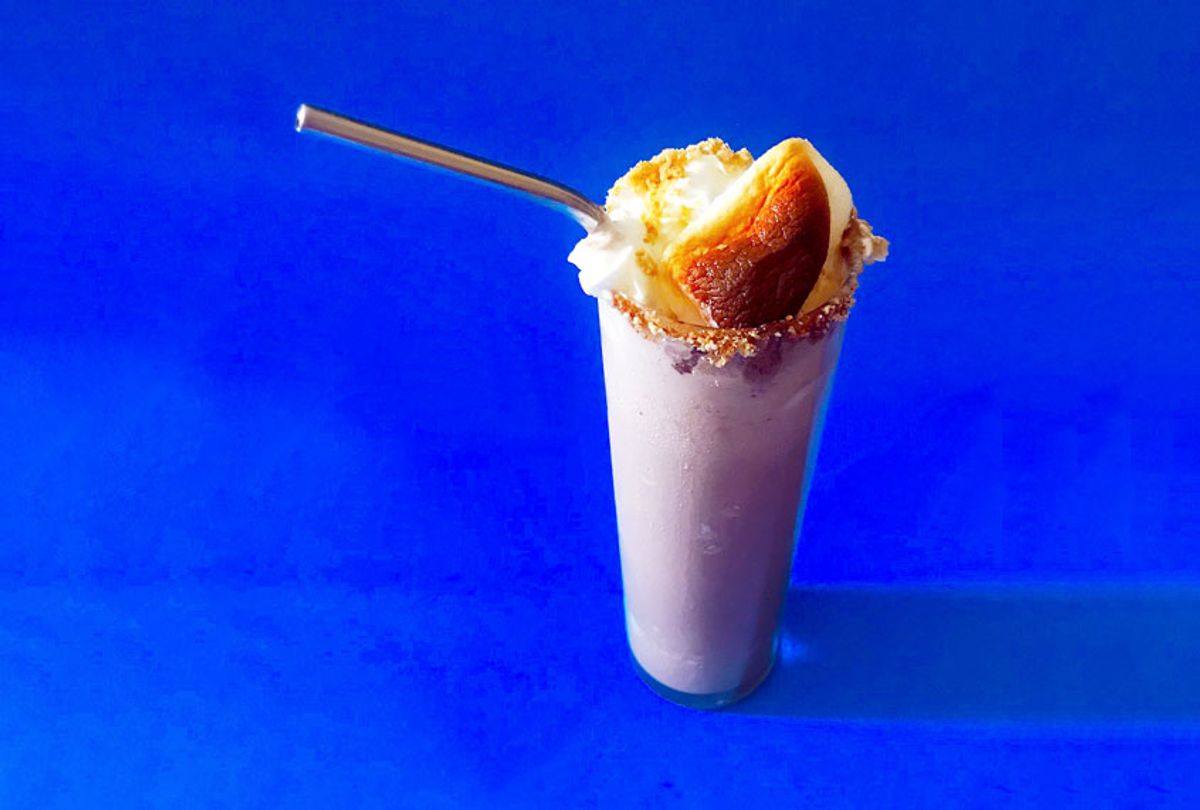 Of the many things the past few months have brought into my life, solitude hasn't been one of them. On the same day in mid-March, my spouse marked one year since getting laid off, my older daughter's college sent everyone home and my younger daughter's high school did the same.

We have passed the four-month mark now of confinement together in a very small New York City apartment of three meals a day, seven days a week, largely together. I've stewed vats of beans and simmered gallons of stock. I'e cultivated sourdough starters and slow cooked enormous cuts of meat. And I've baked everything from bundt cakes and cheesecakes, to cookies and brownies, to pies and merengues. Oh, and I've fried stuff covered in sugar. It's been swell, but I would really like a break now. Thank you, very much.

To have loved ones close and relatively safe and healthy is a privilege I'm thankful for every day. The pleasure of feeding them, offering them even a little respite in the form of something sweet, is on many days the only thing that gets me out of bed in the morning. My friends who live on their own sometimes talk about missing family mealtime or the meditative act of making a cake for someone else. Meanwhile, I lately sometimes miss the feeling of being alone in a hotel room with only a packet of Biscoff and cable TV for company.

You don't need to fill your kitchen drawers with more than one whisk. Salon Food is a huge fan of the FlexiWhisk, a whisk with a balloon mechanism that allows you to change its shape. All you have to do is press a soft rubber button and push up to adjust the size to fit your mixing bowl.

But living with others shouldn't mean a person never gets to enjoy some solo pleasures any more than being alone should limit one's dessert options to only single-serving Kozy Shack puddings (though they are sublime). I think that whatever the size of your household, you deserve something special and a little fancy that doesn't have to be divvied up. Plus, this time of year, the whole oven and stovetop situation is entirely off-putting. This is why we have blenders.

I didn't own a blender until fairly recently, because I believed they were for things you order and pay for, i.e. smoothies, margaritas and milkshakes. That was, of course, the kind of thinking one could afford to have when going out into the world and buying things was something people did. It's 2020 now, and I'm a person who has tequila in her house and owns two different kinds of ice cream scoops. I'm a person who makes shakes. Low-key, apolitical shakes.

In the realm of trendy desserts, I've never been seduced by shake mania. I concur with my firstborn that Shake Shack is just "classy McDonalds," and the cookie-encrusted frankenshakes from Black Tap don't jibe with my minimalist culinary aesthetic. I'm generally more of a root beer float from an ice cream truck kind of gal.

But all that was disrupted when my daughters had a nostalgic evening watching "Enchanted" and making s'mores. Because my favorite flavor of anything is "burned," I soon found myself down all kinds of recipe rabbit holes looking for a campfire-inspired frozen treat recipe for me — and only me.

Despite the presence of marshmallows and a dusting of graham cracker crumbs, I promise this is not a chunky shake. (I don't understand why anyone would put anything in a glass which makes the straw's job harder; fight me if you disagree.) There's just a little texture to keep it interesting, but that caramelized, toasty flavor shines through.

Juggling several measuring cups and spoons while you're in the kitchen may get annoying. At Salon Food, we bake using the Kitchen Cube, which combines more than 19 measurements into a single device. This all-in-one kitchen tool decreases clutter and increases organization at the same time.

Best of all, because of its proportions, this is a milkshake that won't bring boys to the yard and Daniel Day Lewis had best steer clear of. It's a luxurious treat, which requires exactly one straw. If you're feeling magnanimous, you can double the quantities — but don't feel obligated. Not everything has to be shared, and if anyone you live with wants a taste, tell them they can make their own.

Recipe: S'mores Milkshake for One, adapted from Martha Stewart and Dessert for Two