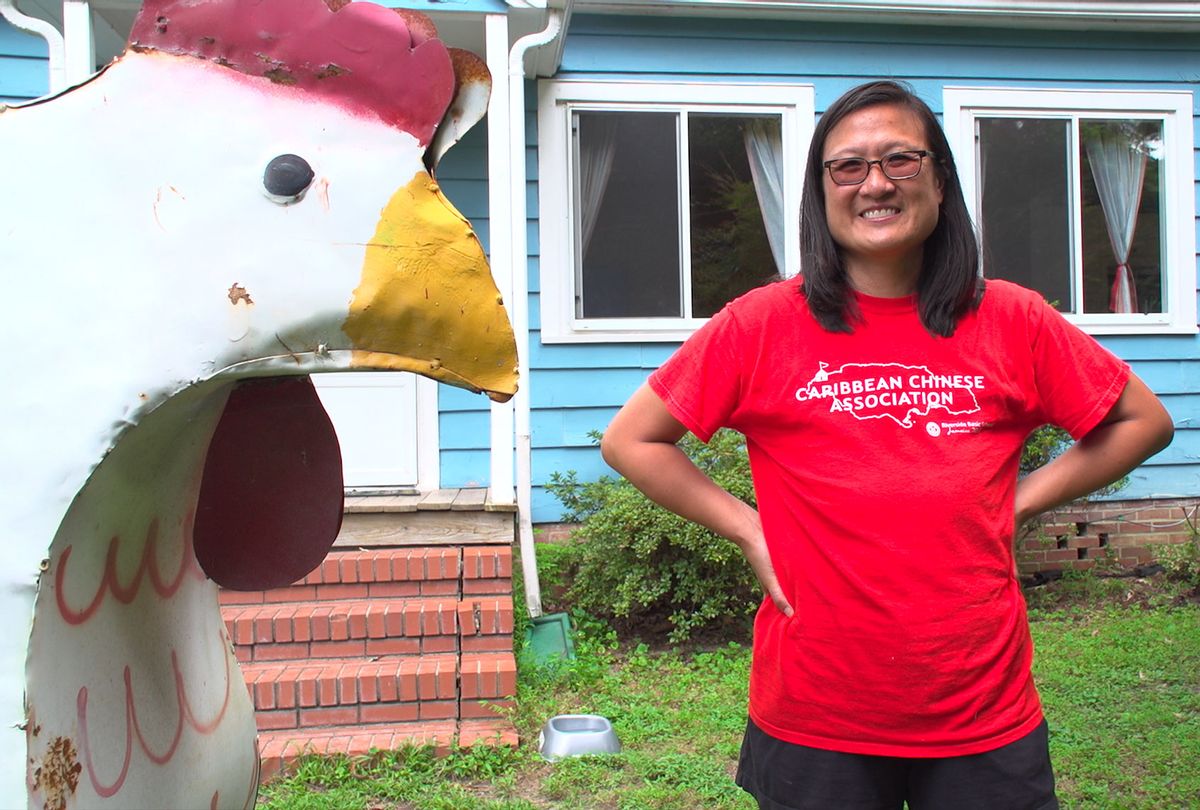 Lance Chen in Dayton, Ohio, is a staunch Trump supporter and member of the Asia American GOP coalition. He became a citizen to vote for Trump and attends Ohio Republican State Dinners for the opportunity to meet Vice President Pence and see President Trump when he swings by to support Jim Rinacci's 2018 (unsuccessful) campaign for Senate.

Democrat Kaiser Kuo, in North Carolina, is angry at people like Chen, as he believes the Chinese Americans can do better. He is involved in helping folks register to vote, and is particularly incensed by candidates like Sue Googe, a North Carolina Republican and Tea Party member. The third subject in the film, Googe is described as a "firebrand for conservatives;" her campaign posters show her posing with guns, and she is vocal in her opposition to socialism and communism. At her public rallies, she uses MAGA rhetoric.
Rounding out the participants is very liberal Jennifer Ho, a professor at the University of North Carolina at Chapel Hill (she is now at the University of Colorado Boulder), who teaches her students how to think critically about race and whiteness. Her comments on racist monuments on campus are thoughtful, and underscored by an episode in the film where the UNC Chapel Hill's Silent Sam statue is toppled.

Chen's evenhanded film also provides brief discussions of laws such as the Refugee Relief Act of 1953, which allowed Asians to immigrate. An early scene in the documentary has Chinese for Trump supporters shouting, "Build the Wall!," while a latter episode features Lance urging for legal immigration. (One of his colleagues asks, "What if China wanted to send 1 billion people to the U.S.?")

The filmmaker recently spoke with Salon about her engaging documentary.

What prompted you to address this topic and how did you find the participants for your film?

I had this idea after the 2016 election. I saw an Economist article about Chinese American Trump supporters. Other outlets also covered this story, so It challenged my assumptions about Asian American voters. I was also intrigued by how passionate and actively they were involved in electoral politics — flying aerial banners and forming Political Action Committees. Lance formed his own PAC. Sue Googe ran for office. I came here as an immigrant 17 years ago, and I never saw first generation Asian American Chinese people actively participating in American politics. I wanted to understand why they voted the way they did. I was going through my own naturalization; I am going to be a first-time voter this year. I wanted to talk to voters in my own community and ask them why they voted the way they did.

I wanted people in battleground states. It took about 5-6 months to find Lance and Sue. I talked to a lot of Chinese American Trump supporters, but none were willing to be part of a verité documentary that followed them through the 2018 midterm elections. I found Lance because some supporters listened to his podcast.

Kaiser explains that his political awareness stemmed largely from his parents, as he grew up in the '70s, and hated Nixon. While it is not part in the film, can you discuss how you developed your own political awareness? Note: I am not asking you to identify your politics.

One is me being Asian and a woman, and my experience living in America as an Asian woman shapes my political views as does living in DC, with all that's going on. I went to film school at American University and took classes like the History of Documentary Film. I saw a lot of social issue documentaries that taught me about different social issues. My first job after graduating was at the UN foundation. I made short videos for programs and campaigns about women's health and climate change to support the UN, and that shaped my understanding of the social issues.

I had to learn everything about America. I didn't grow up here and have all that knowledge. I had to learn as an adult. I'm drawn to social issues documentary with my own work. That's what I'm interested in doing as a person of color and a woman. I do believe equality is important. My values are not shaped by a person; none of my family members are here. It's really shaped by my education and personal experience.

What I appreciate about Kaiser Kuo's comments about his anger at Chinese supporters of Trump is that they seem to be voting against their own (and other minority groups') self-interests. What observations do you have about that?

They don't believe they are voting against their own interest. Lance supported Jim Rannuci because "he's a winner." One interview I did that didn't make it in the film was with Yasheng Huang at MIT, who talked about the emotional alignment of Trump as an authoritarian figure to Chinese immigrants from Mainland China that grew up in authoritarian country.

Lance told me when he first came as a student, he went to a John Kerry rally, and his friends were all Democrats, and he wasn't interested in politics and voting. It wasn't until he saw Trump on TV, on Fox News that he started following him. Sue Googe also always watched Fox News when I was at her house. She got into real estate and read "Art of the Deal," and sees Trump as a role model.

Sue Googe claims that having lived in and escaped from communist China, that she supports Republicans, as they are against socialism or communism — although Kennedy was a good Democrat, because he was against communism. Her argument makes sense, but it also seems facile. Thoughts?

The story about Sue going back to her home village in 2014, after her parents passed away, was a very emotional moment for her. That emotional trigger probably played a large role [in shaping her politics].

I appreciate the way your film illustrates how Lance canvases for his Republican candidate, Kaiser registers voters, and Jennifer discusses voter suppression. Why do you think the film's subjects are focused on these different agendas?

I filmed with them for almost two years and they were active during the election period. Kaiser was phone banking, and Jennifer was volunteering at a polling station. Lance was doing door knocking and building a voter base. I wanted to show first-time voters being civically engaged. The 2018 voter ID amendment was on the North Carolina ballot, so I thought that was important to follow as part of the story. Sue supported the law, but Kaiser and Jennifer didn't. I was interested in asking them about voting rights because it's controversial and it comes back every election season in North Carolina. It has a history of being struck down by the court.

"First Vote" considers issues of assimilation in that Lance became a citizen so he could vote for Trump. Kaiser's children discuss what they love (or don't) about America, and Sue Googe embraces the opportunity she has here. Jennifer, however, has the most complicated issues around identity, claiming that she will always be seen as "other." What can you say about how political participation instills a sense of identity for Chinese and/or Asian Americans?

"First Vote" premieres on Tuesday, Oct. 20 on PBS as part of "America Reframed." Check local listings. A screening and panel discussion with the film's participants is also taking place on Oct. 22 over Zoom.