With "Me You Madness," Steve Mnuchin's wife creates a bold, bipartisan comedy to annoy us all 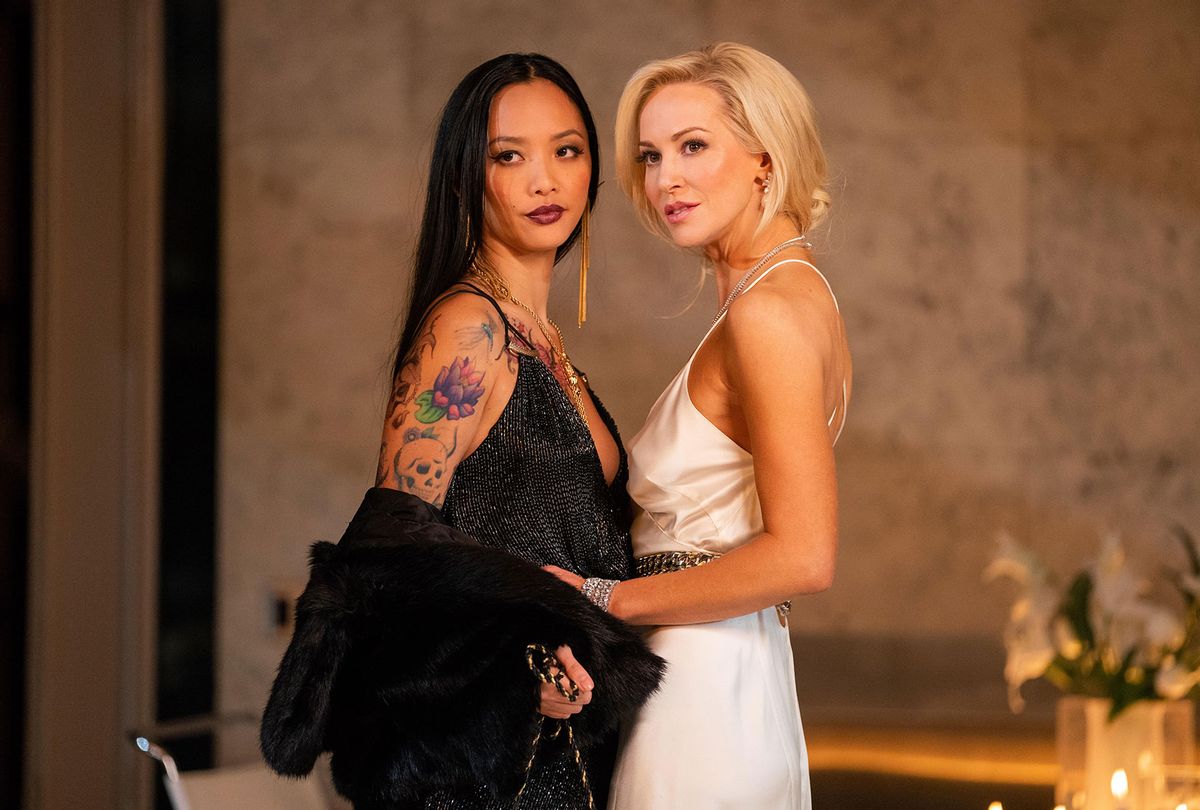 Shuya Chang and Louise Linton in "Me You Madness" (STX Films)
--

As shameful as it is to admit, "Me You Madness," the flashy directorial debut by Louise Linton, the wife of Steven Mnuchin — is not the complete and utter debacle one might hope (or expect) it to be. This is, to be Swarovski crystal clear, absolutely damning with the faintest of praise. Linton's ambitious film is, a pastiche of other films, "American Psycho," "Neon Demon," and "Basic Instinct" chief among them. But as much as one might want to hold Linton in contempt, she generates a few real chuckles in this sporadically amusing comedy-romance, which is being released on demand just in time for Valentine's Day.

"Me You Madness" is as superficial as its protagonist, Catherine Black (Linton), a fast-talking hedge fund manager who wears shiny gold knee-high boots that might make even a seasoned sex worker blush. She is addicted to exercise, taking black-lit spin classes wearing glow-in-the-dark bunny ears, lifting weights (a funny sight gag), and doing 1,000 butt crunches. The actress/filmmaker smugly displays her fit body in a crop top as well as a shower scene as if to troll haters.

But Linton certainly does her damnedest to charm. Her Catherine is, admittedly, a sociopathic serial killer and self-proclaimed shapeshifter, who displays her brilliance when she addresses viewers to inform them, "There are no f**king spiders on Antarctica." She then eats the one crawling on her finger like a potato chip. One can even hear it crunch. (The sound design is calculated, like everything else in this film, to impress and amuse).

Linton is not only breaking the fourth wall here — though it is hardly a wall, more like a dazzlingly bejeweled, very expensive, sheer curtain — but she is also providing character development, symbolism, and foreshadowing. (Female spiders often eat their male mates after sex, Catherine woman-splains).

But don't be threatened by this "really special" lady, who is amazing, beautiful, elegant, charming, smart, and sexy. (Those are words from the script; Linton also penned the screenplay). Sure, Catherine kills people, cuts them up, and keeps their body parts in a freezer. She also later cooks and serves the naughty bits to her dinner guests. But she justifies her behavior; her victims are homophobes, pedophiles, sex traffickers, neo-Nazis and even — gasp! laugh! — Republicans. (Don't worry, she's a bipartisan, bisexual murderess who also dispatches Democrats).

Moreover, Catherine is a self-described "materialistic, narcissistic, self-absorbed, raging misanthrope with an acute lack of conscience." She also has a strong sense of style. (She keeps bundles of cash and a handy gun in her accessories drawer.) The conspicuous consumption is designed to be jaw-dropping; Catherine collects sports cars including a 1965 — not 1968 — candy-apple red Mustang Fastback, and the $294,950 Aston Martin Vanquish that was used in a Bond film, "Die Another Day."

When Catherine wakes up, she is happy and says, "Because I remember I'm me, and my life is incredible."

Viewers who don't laugh with Linton/Catherine will laugh at her. And they will laugh at the sheer gall of this film and this character. "Me You Madness" is certainly, deliberately outrageous — Catherine dances with body parts to "Let's Hear It for the Boy" in one whacked-out sequence. And watching her play a trivia game with her on-demand nail technician (Jimmy Dinh) or banter in Mandarin with her sometimes lover, Yu Yan (Shuya Chang), is good for a snicker.

But what exactly is funny here? The thin plot has Catherine drugging Tyler Jones (Ed Westwick) and sexually assaulting him while he is passed out. He has come to steal from her, but she has planned revenge for one of his previous crimes. However, after a night of passionate sex, he doesn't want to rob her, and she doesn't want to kill him. What's a couple in love to do?

Alas, the film stalls once the kiss-or-kill narrative begins in earnest. The lovey-dovey pillow talk between the couple is remarkably unconvincing. And viewers will likely not be very invested in what follows — a cat and mouse game that has Catherine trying to kill Tyler, who discovered her dirty little secret in the freezer, and makes the mistake of asking her if she is on her period.

Linton fails to create any tension — sexual, comic, dramatic, or otherwise — between Catherine and Tyler, which is the juice this comedy needs. Instead, the filmmaker goes for a wink-winkiness that is more often than not, exasperating. Sure, it's clever when Catherine recounts all the films where killers use guns, and gushes about nunchucks as a weapon, but a sidebar enumerating all the "Texas Chainsaw Massacre" films is excessive. And while Catherine pauses to give a PSA about not leaving animals in cars (even with the windows cracked), this important information is misplaced.

Linton seems to tickle herself, not viewers, by having Catherine and Tyler verbally volley the word "cute" back and forth during their epic face-off, but it is not particularly adorable. Nor is their endless debate about "couch" versus "sofa," or how to pronounce "Van Gogh." Linton's penchant for juvenilia seems limitless; she includes not one, but two fart jokes, and the both, ahem, stink.

"Me You Madness" is certainly designed to showcase its writer, director, and star. A scene of Catherine attacking a victim with an unidentified object — one imagines it is a Louboutin — allows Linton to perform a scene covered in blood and lie about what happened. Her deadpan delivery here earns a genuine guffaw. As does her ability to make the word "Uber" sound sexy and funny when Catherine insists Tyler stay for a drink and call for a ride home. Even the way she mixes her cocktails may induce an adolescent giggle with its overt sexual suggestiveness. But even in 97 brisk minutes, Linton can wear out her welcome. "Me You Madness" is a one-joke film that might have worked better as a punchy short.

As her love interest, Ed Westwick has a strapping bohunk quality that is appealing to a degree that is as limited as his acting. His big scene is an energized lip-synching dance sequence to "I'm So Excited," performed in a silk robe, boxer shorts, and boots. It may be totally ridiculous, and unabashed male objectification, but to the film's credit, all of the scenes set to the wall-to-wall upbeat '80s soundtrack are slightly irresistible.

"Me You Madness" is certainly audacious, which is why it is attention-getting. Alas, Linton's broad film actually never goes over the top enough often enough, making it, ultimately, a dubious achievement at best.

"Me You Madness" premieres on demand on Friday, Feb. 12.