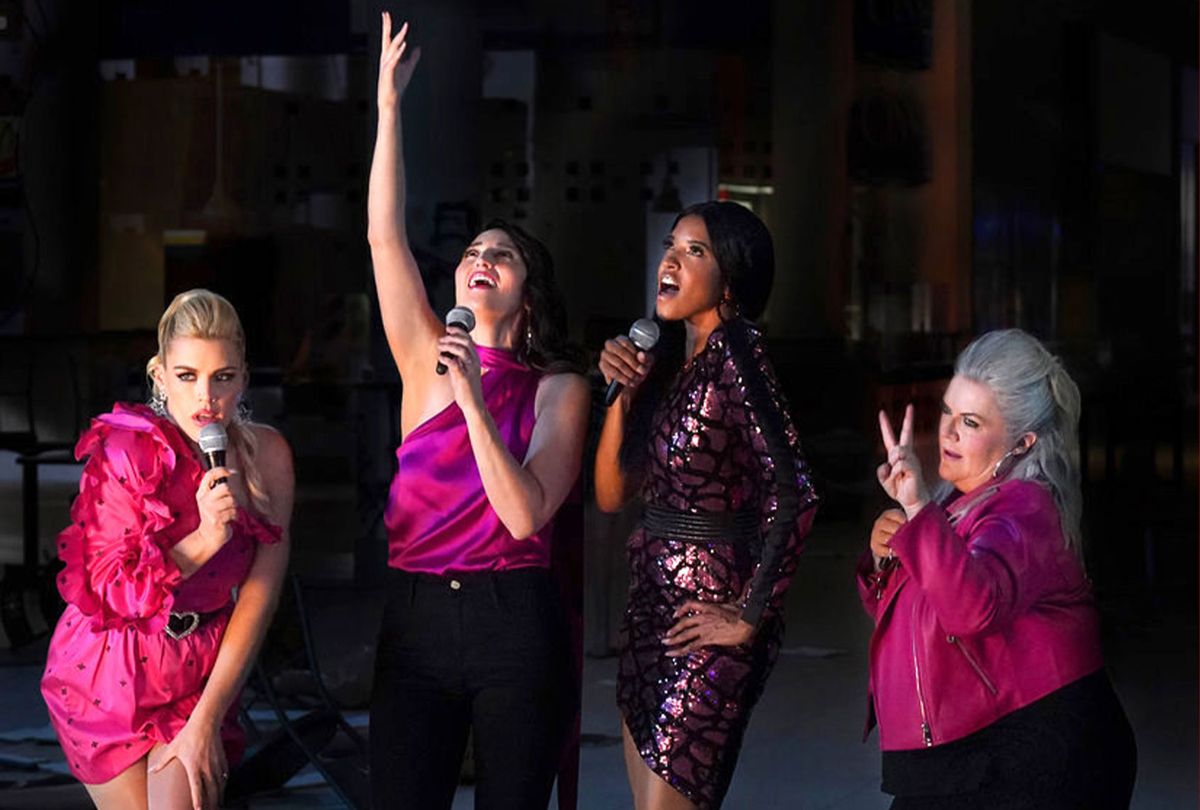 Fame has been described by various famous people as a bee (Emily Dickinson); "the castigation of God by the artist" (Picasso) and "fickle" (Marilyn Monroe). Lord Byron waxed bitchiest when he defined it as "the advantage of being known by people of whom you yourself know nothing, and for whom you care as little."

When the reunited girl group members at the center of Peacock's new comedy "Girls5eva" rode fame's heights they probably weren't aware of that cutting vignette. They'd probably never heard of Byron, but who cares? Precious few of today's celebrities have. They're too busy chasing recognition to read, not to mention being either acutely aware or in denial that obscurity lurks a breath away from fame's hemline. But knowing that wisdom comes from a pile of dust born in the late 1700s tells us something important. Fame may be fickle, but the pursuit of celebrity is eternal. Maybe even . . . five-eva.

In their 1990s heyday Girls5eva proclaimed before all the world, or at least the slice of it that watched "TRL" on MTV, that they'd always be famous and always be friends. In reality they were dozens of sundry combinations of spandex leggings, crop-tops and sugared-over harmonies. This one featured Summer, the sexy blonde (Busy Philipps); Wickie, the wild one (Renée Elise Goldsberry); Dawn, the "chill" girl (Sara Bareilles); and Gloria (Paula Pell), the "sporty" one of the group. The fifth member, Ashley (Ashley Park), was the girl who'd cycled through a bunch of other there-and-gone croon platoons.

Thirty years later they've kept none of those promises. Ashley is gone. What they once envisioned as a legacy to rival the Spice Girls ended abruptly. Wickie is broke and faking fabulousness for the 'gram. The other three are, hideously of all, living average lives. Dawn rents her apartment from her low-achieving brother (Dean Winters) and works in his restaurant. Summer blunders through her arranged boy band/girl band marriage to her suspiciously absentee husband Kev (Andrew Rannells). Gloria is a dentist.

They're fortunate to be one-hit wonders, reminded of that sliver of luck when a hot younger rapper samples their back-in-the-day jam. A subsequent gig on "The Tonight Show Starring Jimmy Fallon" rekindles that old fire whispering, "What if. . .?" Everything then comes afterward is an honest answer to that question.

"Girl5eva" could have been a simple parody of '90s pop bands, emphasizing a desperation to reclaim a youth long gone and playing up its protagonists' inability to accept what is instead of what was. Calling their quest to muscle their way back into relevance quixotic in our youth-obsessed culture is being mild.

But if the caliber of the main cast doesn't let you know this show is better than making its middle-aged protagonists the butt of its jokes, the production's pedigree should spell that out for you. Creator Meredith Scardino worked on "Unbreakable Kimmy Schmidt" along with executive producers Tina Fey (who pops up in a glorious celebrity impersonation) and Robert Carlock.

In this show, as in "Kimmy Schmidt," Scardino and the writers sling jokes with the quickness and certitude of a casino blackjack dealer while emphasizing these women's combined dedication to go after their long-shelved dreams as aspirational, and possible, instead of delusional.

"Girls 5eva" also establishes the problematic nature of most of the 1990s girl-pop genre early on, and in part through a flawless cameo by Stephen Colbert, playing a Swedish songwriting impresario who reminds them that it has been "an entire Zendaya" since the world has even thought about them. (One Girls5eva classic banger has them proclaiming themselves to be "dream girlfriends, 'cause our dads are dead.")

Despite that, absurdity doesn't rule "Girls5eva" in the same way it drove Scardino's Netflix series. Instead the scripts play up the bizarreness of our mass hunger for fame, pitting the women against their ability to influence more than youth . . . although the writers can't resist the odd joke on that front here and there. When Wickie takes on a hookup many years her junior, Winter's leathery bro quips that she's "feasting on youth" like some sort of anti-aging vampire.

Many of Fey's usual comedic beats play through these eight episodes, but familiarity isn't the worst quality for a show that's meant to be binged. Knowing what you're getting tells you whether the four-or-so-hour commitment is worth it. Really, for a pure feel-good comedy about enduring friendship, the love these women have for each other and the embrace of one's 40s with all its wisdom and physical changes, it's not much to ask..

"These new songs are shooting out of me like chin hairs!" Dawn spouts and yeah, that's one way to brag about being artistically prolific. But this also reveals the core weakness of "Girls5eva," which is that you've seen these characters before.

Bareilles' Dawn is obviously this show's Liz Lemon, level-headed but willing to settle for a lesser life until circumstances reawaken her talent and desire. Goldsberry could be either of the irrepressibly sure of herself divas Jane Krakowski marched across our screens in "Kimmy Schmidt" and "30 Rock." Nevertheless, Wickie stands apart by having a crystal grand piano named Ghislaine, which she carts along with her when she couch surfs at Dawn's place.

Neither role challenges these performers, but penalizing them for working well within their capabilities and appropriate to what's been written for them seems pointless with a comedy like this.

At the same time I also expect more from Philipps, who essentially recreates a bubblier, more naïve version of the party girl she played on "Cougar Town." The key difference is that Summer is mom to a sulky social media influencer, and she's kidding herself about Kev.

Pell's Gloria is introduced first as a visual gag, the archetype of the bandmember whose time runs down and over. Hers is the only character portrayed in flashbacks and archival footage by a different actor, Erika Henningsen, who starred in the Broadway musical production of Fey's "Mean Girls."

For a show buoyed by feminist themes the choice to make one member of a girl band look older than the rest will likely rub some folks the wrong way, although the script doesn't harp on it too heavily. Part of hitting midlife is being at peace with growing out of youth and into what and who we're supposed to be, the essential message of this comedy. Plus, and this is crucial, Pell can pretty much do no wrong here or any place else.

Featuring a quartet of actors with fierce pipes, including a Grammy winner in Bareilles and a Tony winner with Goldsberry, demands music to match the mood. This is where the writers really press into overall ridiculousness of the girl band genre by basically making each song verse a collection of punchlines. The best is the folky "New York Lonely Boy," an ode to sibling-free sons of Manhattan couples, performed utterly straight by The Milk Carton Kids. But even the ones that are intentional disasters are suitably entertaining – not enough to instantly want to make it your ringtone, a la "Peeno Noir," but unquestionably more lyrically cohesive.

"I am a work in progress. I'm not finished yet/I'll put my renaissance on the Internet!" one of Dawn's lyrics declares . . . and by the time she and the rest of Girls5eva's fab foursome belt it out, we believe them and believe in them. People love a comeback story, but one where its heroes finally arrive at where they ought to be is far better.

All episodes of "Girls5eva" are currently streaming on Peacock.