Kicking Cuomo to the curb: Democrats evolve on the politics of #MeToo

Biden and other Democrats get it: Kicking Cuomo to the curb is not just the right thing to do, it's smart politics 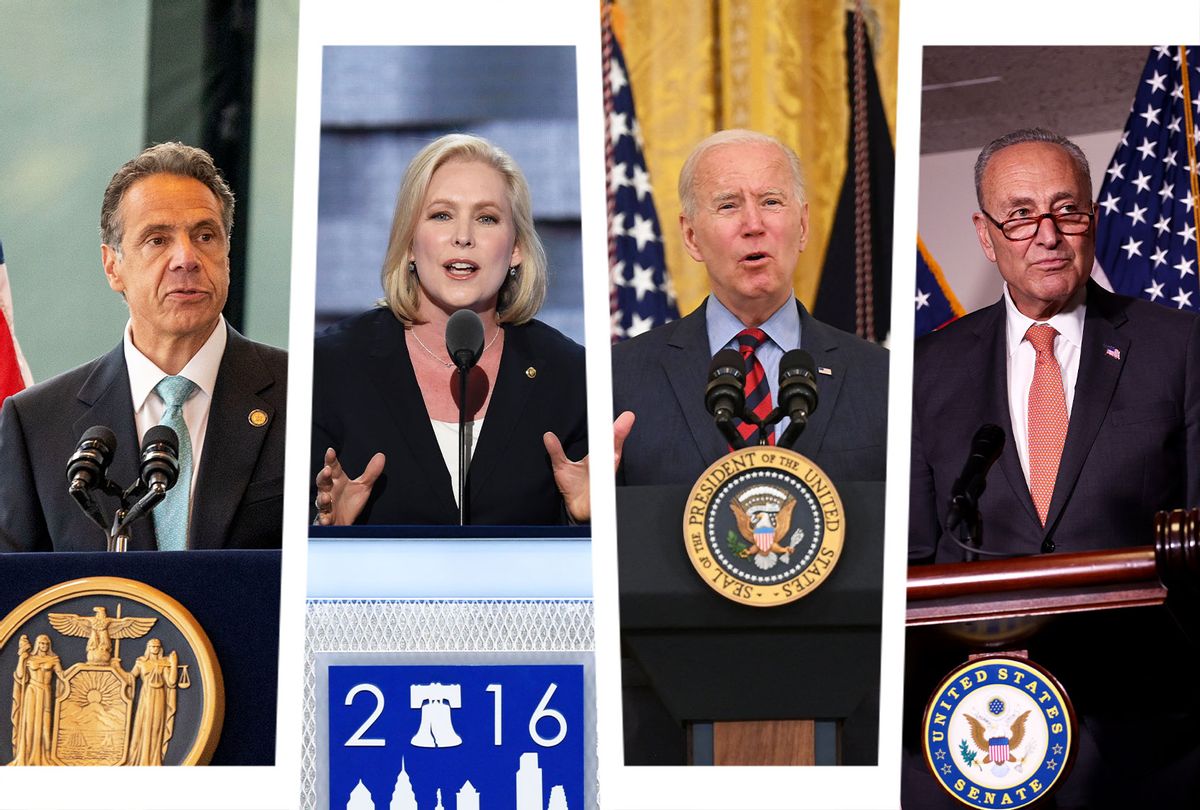 In February 2021, a handful of women stepped forward to accuse New York's Democratic governor of sexual harassment, but he was able to evade the pressure to resign immediately. The Democratic attorney general of the state, Letitia James, opened an investigation into the allegations, giving Democrats like Rep. Alexandria Ocasio-Cortez of New York and President Joe Biden a way to sidestep calls for Cuomo's immediate resignation and instead focus on waiting for the results of the investigation.

On Tuesday, James announced that the investigation revealed "a deeply disturbing, yet clear picture" of Cuomo harassing "multiple women, many of whom were young women, by engaging in unwanted groping, kisses, hugging, and by making inappropriate comments."

Mere hours after the report came out, Biden told reporters that Cuomo "should resign." New York's two senators, Senate Majority Leader Chuck Schumer and Sen. Kirsten Gillibrand, both Democrats, also issued a statement reiterating their calls for Cuomo to step down. "The people of New York deserve better leadership in the governor's office. We continue to believe that the Governor should resign." New York State Assembly Speaker Carl Heastie called the report "disgusting" and Cuomo "not fit for office."

So far, Democrats are rising to the challenge.

Cuomo, on the other hand, has gone the "brazen it out" path, as most people who are familiar with the combative governor's history expected he would.

In a televised response on Tuesday, Cuomo refused to resign and implied that he is the victim of a political hit job. Dismissing the allegations from 11 women, he defended himself by showing photos of "embraces that were totally innocent." Clearly, he has gambled that he can dig his heels in, refuse to resign, and that eventually this storm will pass and his career will survive. But with so much Democratic leadership against him, the odds of an impeachment and successful removal have risen dramatically.

The apparent unity of Democratic leadership was not necessarily a given. After all, there was a similar situation in 2018, when Sen. Al Franken of Minnesota resigned after eight women accused him of similar behavior, mostly groping. In the months and years since, Franken has quietly enjoyed powerful support among huge swaths of the Democratic base — especially the wealthy funders — who blamed his resignation on critics, especially Gillibrand, and not on Franken himself.

Anyone who saw the rallying around Franken had good reason to fear — or in Cuomo's case, hope — that the Democratic Party had lost all appetite for giving high level politicians the boot after such well-substantiated allegations. And not just because Cuomo had built up a wellspring of approval among Democrats for his daily briefings during the early days of the COVID-19 pandemic, which were a sharp contrast to the "drink bleach" nightmare on display in Donald Trump's White House. There's also the still simmering "what about Trump" sentiment that so many Democrats hide behind when wanting to minimize allegations of sexual abuse against Democratic leaders.

In sum, a lot of Democrats are angry about what they correctly perceive as a double standard between Democrats and Republicans when it comes to getting away with sexually abusive behavior. Obviously, the most prominent example of this is Trump, who is on tape bragging about committing sexual assault and has been credibly accused of sexual assault by 26 women, including rape allegations from journalist E. Jean Carroll. But Trump's support among his own party stays strong, so much so that GOP leadership is clearly ginning up for Trump to sail into the 2024 presidential nomination. Similarly, Brett Kavanaugh, Trump's appointee to the Supreme Court, survived an extremely credible attempted rape allegation and is generallly regarded by the GOP base as a noble hero, instead of a victimizer.

It makes sense to be angry about this, but what doesn't make sense is assuming, as so many Franken defenders did, that this is an unfairness to be rectified by giving male Democratic leaders a similar pass for sexual misconduct even if it does — as is true of Cuomo and Franken — fall short of the levels of violence alleged against Trump and Kavanaugh. For one thing, there's the question of what is fair to women — both the women who are victims of gropers and harassers and women who are just afraid to enter politics for fear of becoming a victim. Being fair to women and creating a safe work environment is important, even if Republicans refuse to do the same on their side of the aisle.

But also, it's just smart politics.

Someone like Trump gets away with what he does not by denying that he's corrupt or a sexual predator. Instead, he simply argues that everyone does what he does and that people are complaining not because they actually care, but because they're trying to score political points. Trump and his ilk benefit from a system where allegations of sexual abuse and harassment are seen not as serious concerns, but as bad faith noise made by people with political agendas. When Democrats let men on their own side get away with sexual harassment, that adds credence to the idea the outrage over this is little more than disingenuous politicking.

This is an issue where giving up the moral high ground is not just a bad idea, politically, but morally inexcusable. Someone needs to keep standing up for the rights of women and girls — of all people, really — to live their lives, free of sexual harassment and abuse. Republicans sure don't care, so Democrats have to. And in order to make that argument credibly, Democrats need to police their own. It's both the right thing to do and the smart thing to do.

Biden gets this. He failed on this front when he led the 1991 confirmation hearings for Supreme Court Clarence Thomas, famously failing to do more to support Thomas accuser Anita Hill. Since then, Biden has endeavored to rectify his error. He's been at the forefront of fights to pass the Violence Against Women Act and he ran the campaign against campus sexual assault when he was Vice President under Barack Obama. He may have considered Cuomo a personal friend, but his swiftness to call for Cuomo's resignation on Tuesday underscores that Biden's not about to turn his back on that carefully built legacy to defend a man with such overwhelming evidence against him. Gillibrand, who has gotten so much heat and lost so much funding for speaking out for Franken's resignation, was also not afraid to step out again to speak against Cuomo. She gets it: Standing by Cuomo means being a hypocrite and a poseur. Pushing back against him means being consistent in the belief that sexual abuse and harassment is wrong, no matter who does it. Hopefully soon the New York legislature will start impeachment hearings, and Democrats can really prove that standing against sexual abuse isn't just about words, but about taking action, even when it's your own party members who need to face judgment.