No, we're not living "The Handmaid's Tale" – it's worse, and a show highlighting how was passed over

Referencing Hulu's white feminist fable elides over how our world is more like "Lovecraft Country: Supremacy" 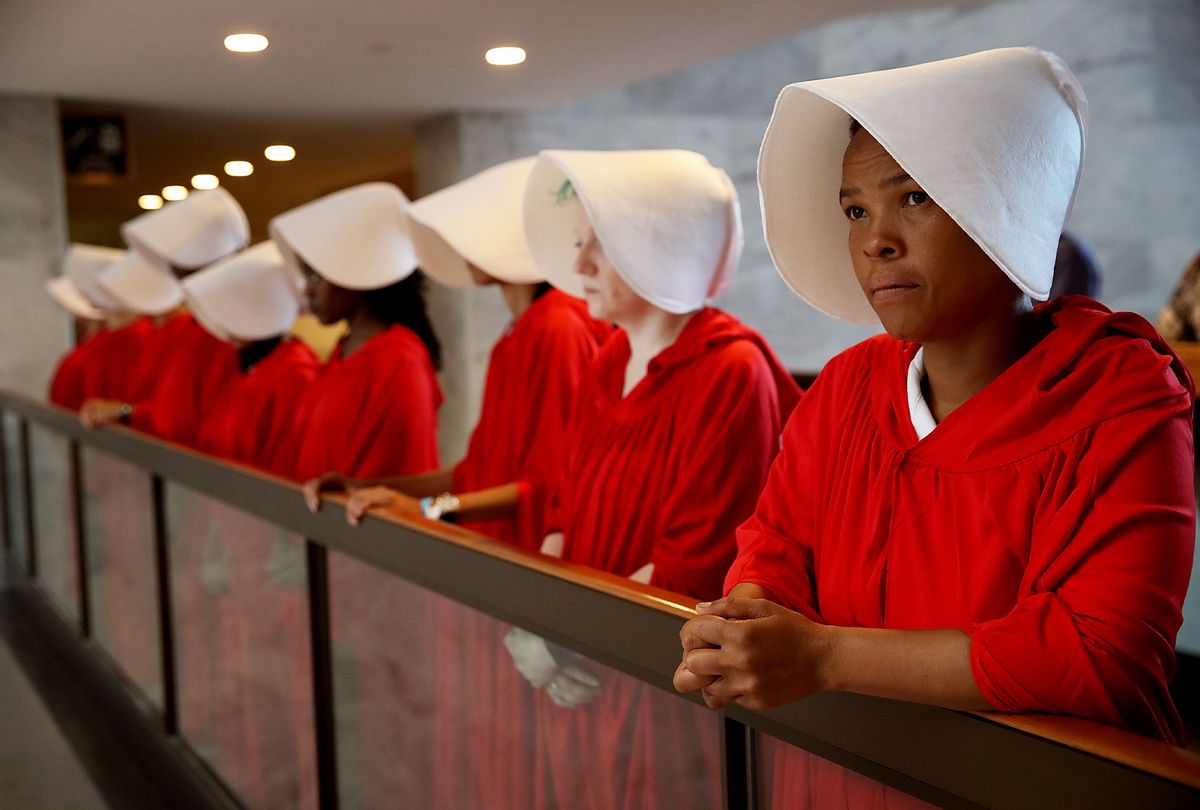 Next weekend we will see whether "Lovecraft Country" gleans any Emmy wins out of its 18 nominations. If it does, said victory or victories will be bittersweet since, despite the overwhelming critical acclaim it received and the solid ratings for its first and only season, HBO canceled it.

After the bad news left the show's supporters wondering why, series creator Misha Green subtly provided an answer by releasing a glimpse of what she envisioned for the second season.

"Wish we could have brought you #LovecraftCountry: Supremacy," Green tweeted. "Thank you to everyone who watched and engaged" tellingly adding the hashtag "#noconfederate" in her sign-off.

"Confederate," for those who may have forgotten, was a series HBO announced in 2017, an alt-history drama from "Game of Thrones" creators D.B. Weiss and David Benioff weaving its "what if" plots from a scenario in which the Confederacy won the Civil War. News of its development received a level of furious protest the network obviously did not anticipate, and yet its executives refused to confirm that the show wasn't moving forward until January 2020.

But the reason Green's small reveal of what could have been haunted me on Wednesday is entirely divorced from that debacle. What brought it to light was the flotilla of references to "The Handmaid's Tale" floating through my Twitter feed, right on schedule.

That show's title comes up whenever abortion-related rollbacks hit social media, you see. And there's such admirable predictability to these reflexive citations that I'm surprised Hulu hasn't set its recommendations algorithm to capitalize on the angst. Imagine the suggestion headers: "Because you're freaking out about what's going on in Texas . . ."

This may come off as a flippant dismissal of the very real and legitimate crisis. I assure you it is not. Honestly, I can understand why a wide swath of people read the Supreme Court's silent refusal to stop Texas' draconian Senate Bill 8 from going into effect on Sept. 1 as a sign marking our entry into Margaret Atwood's Gilead.

Its implications are severe. SB8 effectively ends Roe V. Wade's protections at the state level by banning abortions at six weeks with no exception for rape or incest and deputizes private citizens, including people who live outside of Texas, to enforce the law by suing anyone believed to have assisted in facilitating an abortion procedure. That means a patient's friend, the office manager employed by the provider, the person driving them to the clinic could be found liable. If said plaintiffs prevail in court, they can receive up to $10,000 – a bounty, essentially – and have their legal fees paid for by the defendant. The defendant is not entitled to such protections.

In the coming days I'm guessing we'll see protesters don red robes with white winged hats to bring attention to this violent injustice. Engaging in such cosplay makes for attention-grabbing civil disobedience, but it also plays a part in eliding the reality that women like Elisabeth Moss' heroic June – which is to say, white middle-class professionals with resources – will probably have access to safe abortions no matter what happens to Roe v. Wade.

Women like Yvonne Strahovski's Serena Joy, loyal wives, family members and colleagues to sexists who reward their complicity, will continue to vote against their own and fellow women's rights to retain agency over their own bodies. Any laws restricting choice won't negatively impact them and theirs.

What "The Handmaid's Tale" doesn't reflect is the reality of which people disproportionally affected by anti-abortion and anti-reproductive health legislation: poor women, Latinx and Black women, queer folks and women trapped in abusive situations.

This is what brought me back to wondering what could have been if Green had been granted a chance to bring "Lovecraft Country: Supremacy" into being.  The title hints she was onto something that's urgently needed in the speculative fiction space, which is an examination of how white supremacy is the behind the corrupt forces destroying American democracy for all but a very powerful few.

After all, the same people hellbent on subjugating women by forcing them to give birth against their will and then gutting healthcare and education funding are also passionately working to deny the vote to people of color and roll back rights protecting LGBTQIA+ folks. These are the same folks imposing their political will by mob intimidation by storming school board meetings and town halls railing against masking mandates and vaccination requirements.

As legal scholar and NAACP Legal Defense Fund President Sherrilyn Ifill neatly spelled out in a Twitter thread posted on Wednesday, "it is part of a desperate effort to do by harassment, intimidation, & menacing what could not be accomplished by regular channels of democratic engagement."

All of them are under the sway of the same force, the one after which Green named her potential second season.

The standard caveats apply here of course, starting with the acknowledgement that there were probably many reasons HBO passed on "Lovecraft Country: Supremacy." Also, said season could have ended up being a massive misfire; we'll never know.

However, the reason that tweet came to mind hinges less upon that specific pitch than the concept itself. There are a million reasons why "Confederate" was an awful idea, but there certainly is room for a thoughtful genre series based upon a view of America as it is experienced by marginalized people, centered upon a cast drawn from those communities.  But in frightening legislative scenarios like the one we're grappling with right now, no such show exists as a reference point.

If those frequent references to "The Handmaid's Tale" tell us anything, it is that audiences are more apt to process our steady erosion of legal protections through watching shows like that than they are to pore over expert analysis or court documents.

Sadly though, a likely reason that television and mainstream film studios haven't placed major backing behind politically relevant dystopic visions centering people of color is for the very same reason that "Handmaid's Tale" is popular. Dystopias depicting white characters appeal to the target audience's darkest fantasies about being threatened by a world through which they can otherwise move safely.

The rallying power of "The Handmaid's Tale" proves this, along with other popular movie and TV titles featuring white heroines such as "The Hunger Games," Amazon's adaptation of "The Man in the High Castle" or the "Divergent" series, to name a few.

In those stories the audience isn't encouraged to contemplate the ways in which the few characters of color in the heroine's sphere might have faced a level of discrimination she didn't. As in "The Handmaid's Tale," racism and class stratification usually isn't explicitly examined. It's assumed that since the world has crumbled to the point where it's terrible for people like June, it must be equally bad for everyone.

Except it isn't, evident in the shocking – shocking! – recent news coverage of all the ways that reproductive health discrimination and the anti-abortion movement has disadvantaged women of color, immigrants and the queer community for decades. Centuries, truly. But if "The Handmaid's Tale" is the only lens through which one evaluates America's reproductive rights struggles, you may not make that connection.

Where were the scores of "America is becoming 'The Handmaid's Tale'!" warnings in September 2020, when a whistleblower filed a complaint about a government-contracted doctor sterilizing women in Immigration and Customs Enforcement (ICE) custody without their knowledge or consent?

Where were they when increasingly restrictive laws shut down women's health centers in other rural communities in Texas, limiting access to adequate preventative medicine, pre-natal care and maternity services?

Granted, some people made the connection between the show and reality in the 2019 case of Marshae Jones, a Black woman in Alabama indicted for the death of her fetus after she was shot multiple times in the stomach – in part, I'm guessing, because Atwood herself linked her vision of dystopia to the case.

Suffice it to say yes, reproductive rights advocates have a right to be alarmed and fed up. But before you reductively cite "The Handmaid's Tale" as a frame of reference reconsider what it implies. Because the dystopia it cloaks in vivid costumes and outrageous Aunt Lydias has been the reality for millions of poor people, many of them Black and Latinx, for a very long time. But that reality has never received the benefit of striking costumes or grand sets, let alone a full TV season.