"Dexter: New Blood" is less of a revival than another stab at a satisfying closure

Michael C. Hall's avenging serial killer returns in 2021 largely unchanged. Given how he left us, that may be...OK? 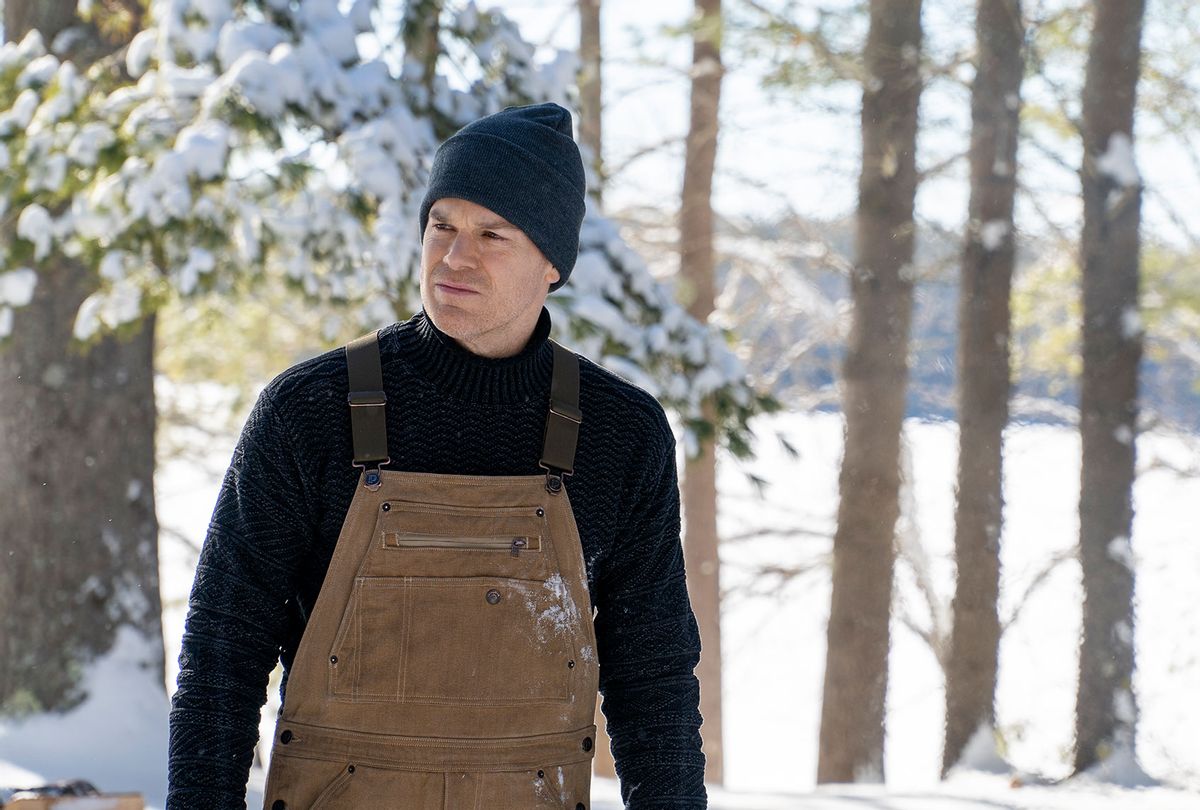 Part of Dexter Morgan hopes the world joins him in pretending that the last decade, and much of what came before it, never happened.

Clyde Phillips, the first showrunner to steer "Dexter" from the novels originating the character into a premium cable phenomenon, doesn't have that luxury. His and Michael C. Hall's return in "Dexter: New Blood" has no choice but to reconcile a terrible break-up between the character and their audience.

Phillips exited "Dexter" at the end of Season 4, long before the finale that is popularly thought of one of the worst ever. Our last view of Hall's avenging serial killer placed him in Oregon, unleashing the inner predator he's dubbed The Dark Passenger on . . . old growth forests.

Dexter Morgan met us as a forensics specialist with the Miami Police Department, a wolf hiding among bloodhounds he sated with a helpful attitude and daily donut deliveries. At that series' close he abandoned his infant son Harrison with his serial murdering lover Hannah to live out his days as a lumberjack, taking chainsaws to lumber. By then the show had long lost the sharp edge that once made it unmissable.

Thinking back on it, his Pacific Northwest move mainly left me with a shrug. It wasn't a satisfying ending, but it was one that could have remained undisturbed. Monsters gravitate towards the woods, after all. Choosing to vanish into one seems like a natural choice for a serial killer who's been found out.

Still, long absences and an ocean of TV mediocrity has a way of casting past shows and their shortcomings in a rosier glow.

None of this means we needed "Dexter: New Blood," but its announcement wasn't met with resistance. We may not have been clamoring for it with the same molten passion fans poured into keeping hopes for a "Deadwood" revival alive, but it shares the air of unfinished business. The difference is that "Deadwood" didn't have an ending until David Milch finally gifted the world with its closing chapter in 2019.

In contrast, many would agree that "Dexter" could use some version of a mulligan, even eight years after the 2013 finale.

Knowing this new effort is helmed by Phillips, the man who produced the first show's best seasons may be sufficient to instill confidence in any doubters.

Phillips gifted viewers with an incomparably taut season of TV before he left the show at the end of Season 4. This was the arc where Dexter pursued and evaded John Lithgow's Trinity Killer only to pay a grave price for indulging his urge to take down a predator of predators.

"New Blood" doesn't entirely ignore the subpar seasons that came after that, although the title hints at its driving premise.

All these years later, Dexter is concentrating on keeping his sociopathic predator locked down deep. He's built a new life in Iron Lake, an upstate New York town where he goes by Jim Lindsay. Jim lives in a cabin on a lake, keeps a few goats and chickens, and works at the local outdoor sporting goods shop.

Never one to completely stay away from police business, Dexter – sorry, Jim – dates the local police chief Angela Bishop (Julia Jones). Above all he's devoted to a routine, treating his murderous impulses like a substance addiction. And as addicts are prone to do, he slips . . . just in time for Harrison (Jack Alcott), who is now a teenager, to turn up in his life unannounced.

From there "New Blood" follows many of the original's patterns with a few enhancements, none of them terribly daring.

Hall interprets Dexter's new false identity as an opportunity to embrace some semblance of normalcy, injecting sanguine characteristics into his performance that his Miami persona lacked.

Maybe this is evidence that Dexter has, if not changed, at least learned from the past. Jim Lindsay isn't entirely relaxed, but he slips into the community's ecosystem without anyone registering him as overtly creepy. That tracks, since everybody there is nice and a little odd, including Angela's fellow officer Logan (Alano Miller).

Phillips abandoned the other details that defined the original. Gone is the stylish opening credits sequence transforming Dexter's morning ritual into a murder scene every week. His sarcastic voiceovers revealing his true thoughts are also missing; both omissions serve a purpose.

He's still guided by imaginary conversations with a role model, but his supportive insights from his adoptive father Harry (James Remar) have been replaced by more punishing visitations from his sister Deb (Jennifer Carpenter ).

Harry held the role of Dexter's guide and conscience. Deb is more of a torturer, threatening him with warnings about what could happen if he slips up or makes messy choices, and this show wouldn't have any reason to exist if he didn't.

"Dexter" dropped at the height of our fixation with antiheros, joining the ranks of Don Draper ("Mad Men", Vic Mackey ("The Shield"), and Tommy Gavin ("Rescue Me") and coinciding with the departure of Tony Soprano, the figure who started it all. He's also the aughts versions of the serial killer boogeymen that proliferated in the '90s after "The Silence of the Lambs" made Hannibal Lecter a critical favorite.

Even in a sea of terrible men lionized by our culture, Dexter Morgan stood out. The crux of his appeal is the character's ability to channel his sociopathy into "The Code": he's a serial killer, but he only hunts those who are provably evil. He has a terrifying body count, having disappeared more than 100 people, but if he can't find evidence of your egregious malice, you have no reason to fear him.

Applying the character's duality and operating principles to modern definitions of good and evil could make for a fascinating update. But "Dexter: New Blood" can't quite unstick itself from the past, in the same way that Dexter himself cannot fully shed the old skin of who he was.

Jim Lindsay really doesn't want to kill anyone, but Dexter Morgan can never predict when or why his Dark Passenger will overcome his desires. Harrison's arrival gives him a new reason to maintain his decade-long streak of being murder-free.

His son's emotional distance also makes Dexter fear that Harrison has inherited his father's destructive hunger – recalling, always, that both father and son were found in pools of their mother's blood when they were infants.

Moral compasses are insufficient jailers because they malfunction all the time.

Just ask Joe Goldberg, the sociopath at the heart of "You" and the nearest inheritor to the legacy of "Dexter." Joe is essentially the 2021 edition of Dexter Morgan except he was built without a code to keep his obsessions in check. Joe isn't necessarily more appealing than his predecessor, and "You" at its best can't hold a candle to the greatest seasons of "Dexter."

But "You" and Joe tap into a sinister undercurrent of romanticized abuse and violence running through our culture. Joe is a bibliophile who believes in classic love stories. His hunt for love leads him to fixate on one woman, expecting her to live up to his impossible fantasy. When she inevitably falls short, he erases her and moves on.

Penn Badgley, who plays Joe, once gently confronted women online when they shared how much of a crush they developed on his character by reminding them that Joe is a murderer. What's frightening is how pervasive that warped acceptance is. Not only is it directed toward fictional figures but real men with a reputation for violence.

Witness the continued success of Mel Gibson and Chris Brown or, most recently, the Insider report about Barstool Sports' founder Dave Portnoy's history of subjecting young women to violent, traumatic sex acts. Each of these men have a reputation for being abusive misogynists, but the horrifying part is to witness people frame these acts of barbarity as entertainment or, worse, part of the attraction.

Portnoy's combative trolling and tendency to unleash his devoted followers on women is central to his public image. And yet, as the Insider story indicates, "Young women tag him in provocative videos and photos in an attempt to get his attention."

"You" and Joe are the distilled products of a misogynistic culture, creating a combination of attraction and revulsion in the audience – especially when he gets his wish and marries his match.

"Dexter" operates on a simpler framework, one from which "You" sprang and evolved. That makes it odd to see "New Blood" working with classic mechanics while letting subplots tied to current topics remain largely adjacent to his part of the action. Dexter Morgan was never expressly a white knight, but placing such a tight focus on his dilemmas without adequately integrating present concerns about crime and punishment is a missed opportunity, holding back the story's transition from what was to what it could be.

Iron Lake also is home to several astronomically wealthy and entitled heels, including a domineering giant played by the always excellent Clancy Brown. It's also a place where women go missing. Angela is at the center of that subplot, and has ties the local Seneca community whose members also have disappeared. These threads and Dexter's are bound to tangle, but as it stands there are no hints that it'll do so in a way that speaks broader message besides setting up what we hope will be a tense finish.

Little of that should get in the way of "Dexter: New Blood" capturing a new audience and reclaiming old fans discontented by where the original left us. Familiar habits are a comfort, even the bloody ones, which mean it's probably sufficient that Dexter Morgan's limited series misadventures are at least as entertaining and those driving better past arcs.

As to whether the story can maintain its edge through the finish, consider us wary.

"Dexter: New Blood" premieres Sunday at 9 p.m. on Showtime. Watch a trailer for it below, via YouTube.