Dino chicken nuggets: the history, the meaning, the majesty of a cultural icon

Little salty T-Rexes have a starring role in "Sweet Magnolias" — and in our hearts. Here's why they're so big 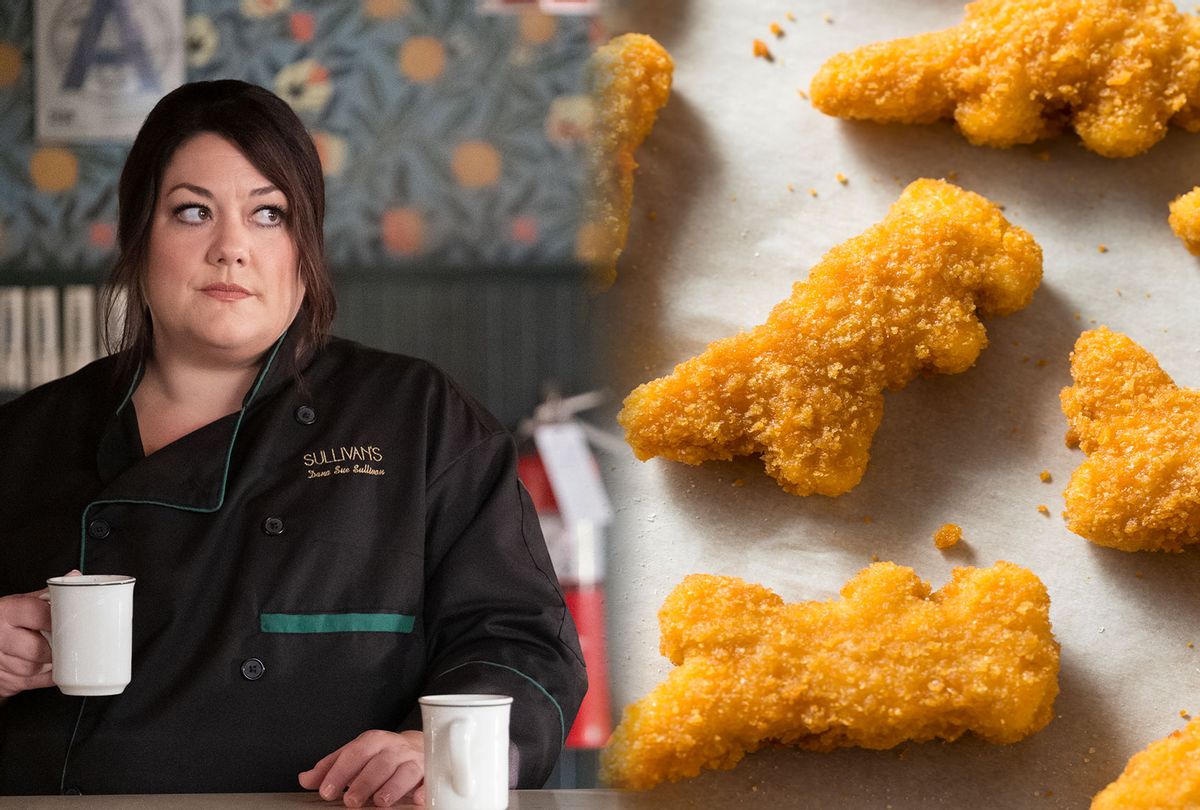 Tom Haverford of "Parks and Recreation" likely had a special name for them. Baby Yoda sings a song about them. And they are a food my child will never turn down.

The food is more than a snack, but a cultural icon, representing not simply a crudely rendered T-Rex but home, innocence, belonging. In the second season of the Netflix hit show "Sweet Magnolias," dino nuggets get their own significant plotline. What is it about these Cretaceous bites? Where did they come from? Why are they so tasty? And why — this question comes from my son — don't I have more of them waiting in the freezer right now?

Related: Bless their hearts: The women of Netflix's "Sweet Magnolias" need to do more than pour it out

In "Sweet Magnolias," the show about three southern women dealing with divorce, children and men in a small, South Carolina town, dino nuggets play a pivotal role. One of the main characters, Dana Sue (Brooke Elliott) a chef and mother, has volunteered to cook and distribute food at the local vacation Bible school.

Austin's meltdown and his specific food preference could signal that the young character is perhaps neurodivergent, but that's not the direction "Sweet Magnolias" decides to go. After a teenaged counselor gossips about the child ("the middle child of five") and the pastor both shuts down the gossip and continues to gossip herself (Austin's father is "underemployed" and the family "haven't joined [the church] yet, but I'm helping as much as I can. Well, as much as they'll let me"), Dana Sue's estranged husband informs her he went to school with Austin's father, and the family is poor.

This is a lot of gossiping in a church yard with the child in question literally in earshot. It should also be noted that Austin is a child of color — one of the very few we've seen on this show — and Dana Sue is a white woman. It's troubling that "Sweet Magnolias" chose to make one of its only young characters of color poor. And Dana Sue, of course, will make everything better.

But why chicken nuggets?

Leaving aside that Austin may simply have a favorite, as many children do, or be picky and hangry (again, happens a lot with kids), chicken is the most popular meat in the United States, according to The Guardian, which calls the mighty chicken nugget "the true symbol of our era." Chicken's popularity can in large part be traced to its thriftiness. It's one the cheapest meats you can purchase, and has been since at least the 1960s (though that information comes from the National Chicken Council, so maybe take your chicken with a grain of salt).

Of course, its inexpensiveness comes at a price, including workers' lives. As The Guardian writes, only "two cents for every dollar spent on a fast-food chicken goes to poultry workers." Poultry processing was a highly dangerous job before the pandemic, and since its onset, poultry workers have been some of the hardest hit by the virus, along with all meat processing workers.

For the consumer — maybe especially the parent — chicken's appeal comes from the fact you can stretch it, using bones to make broth, shredding leftover bits into chicken salad, for example. And it's relatively bland, a blank protein canvas for sauces, breading, dips or other flavors. That makes it perfect for kids, especially when clothed in the crispy coating of nug-form. Most kids love a fried thing. (OK, I do too.) The nugget is finger-friendly. It's portable. And it's cute.

Though it's hard to know who came first, agricultural scientist Robert C. Baker is generally considered the father of the chicken nugget, inventing it in his Cornell University laboratory in 1963. Importantly, Baker used leftover, little-utilized bits of chicken that might otherwise be wasted and "found a way to keep the breading attached to the nuggets during the frying process."

According to the History network, Baker, who invented dozens of food products, including turkey ham, "did not patent chicken nuggets. Instead, he mailed the recipe to hundreds of American companies who would later profit from his invention." Thank you for your service, chicken nugget Father.

As for when chicken nuggets started coming out dinosaur-shaped? We can possibly thank "Jurassic Park" for that.

In 1993, the year the blockbuster film adapted from Michael Crichton's novel first roamed the Earth, dino chicken nuggets debuted at the Museum of Natural History, along with dino fries and dino gummy bears. "The Museum had briefly considered a Bronto Burger as well, but they scratched the idea for fear some kids might assume the worst." Leave my favorite plant-eater alone, please.

Kids love dinosaurs. Adults do too, and the hope that in making food shaped like a beloved creature a kid might actually eat dinner is genius. It works. And I regret to inform you, though likely this is no surprise to any parent or guardian, dino chicken nuggets are sometimes slightly more expensive than the lump-shaped ones. They can definitely be harder to find in stores, especially when your child demands them.

Yet unscientifically, they are the most delicious. According to a ranking of chicken nuggets by shape on Thrillist (where the dino nug comes in at number 1, by the way), this is due to "the general girth of the dino appendages, which manages to prevent the overall animal from drying out. They also have fat little bellies that seem to burst with salty juices."

It's not only that the shape evokes comfort for adults as well as kids, a return to perhaps a more innocent time in our lives (not to mention a more innocent, pre-meteor time for the dinos), dino chicken nuggets are readily identifiable. Even a child who perhaps cannot yet distinguish between nugget brands can tell if they're shaped fancy or not.

In "Sweet Magnolias," Dana Sue's sort-of ex explains that Austin "just wants to be like all the other kids who have name brand food that was bought for him instead of donated to his family like an afterthought." People living in poverty or food insecure homes deserve nice things, including nice food, including treats.

But dino chicken nuggets aren't exactly a treat, not like steak or lobster. Not even like cookies. They're protein that gives you energy and helps you feel full (so does steak and lobster, by the way). For some kids, they're a staple.

Dana Sue runs a nice, likely expensive restaurant. She's personally affronted that Austin would request store-bought nuggets in the face of her fine, lovingly made charity food — and doubly offended when she bakes him fancy (probably organic) nuggets from scratch and he rejects them. He wants the dino ones, the ones that taste a certain way and look a certain way, a way that he knows and a way that many other children get to have. Can you blame him?

Dana Sue finally wises up and brings the child commercial dino chicken nuggets, along with some extras and other food to take home with him, a gift certificate to her restaurant for his family and her phone number. She says, her eyes filling with tears, he can call her any time and she'll stop what she's doing and make him dino nuggets. This is an emotional moment, though it does have the uncomfortable whiff of white saviorism, when Austin sees the food and hugs Dana Sue, telling her he loves vacation Bible school and he loves her.

I think what Austin loves is what any kid loves and needs: to be seen, to feel special and appreciated, taken care of and safe — to recognize the savory, hot food coming out of the oven or set out on the picnic table and know it will be enough. It will be everything.