Burned Out: When you're sick of cooking, embrace the comfort of "sick day" food

Even if you're feeling A-okay, indulge in a hot bowl of soup, served up with Saltines and some ginger ale 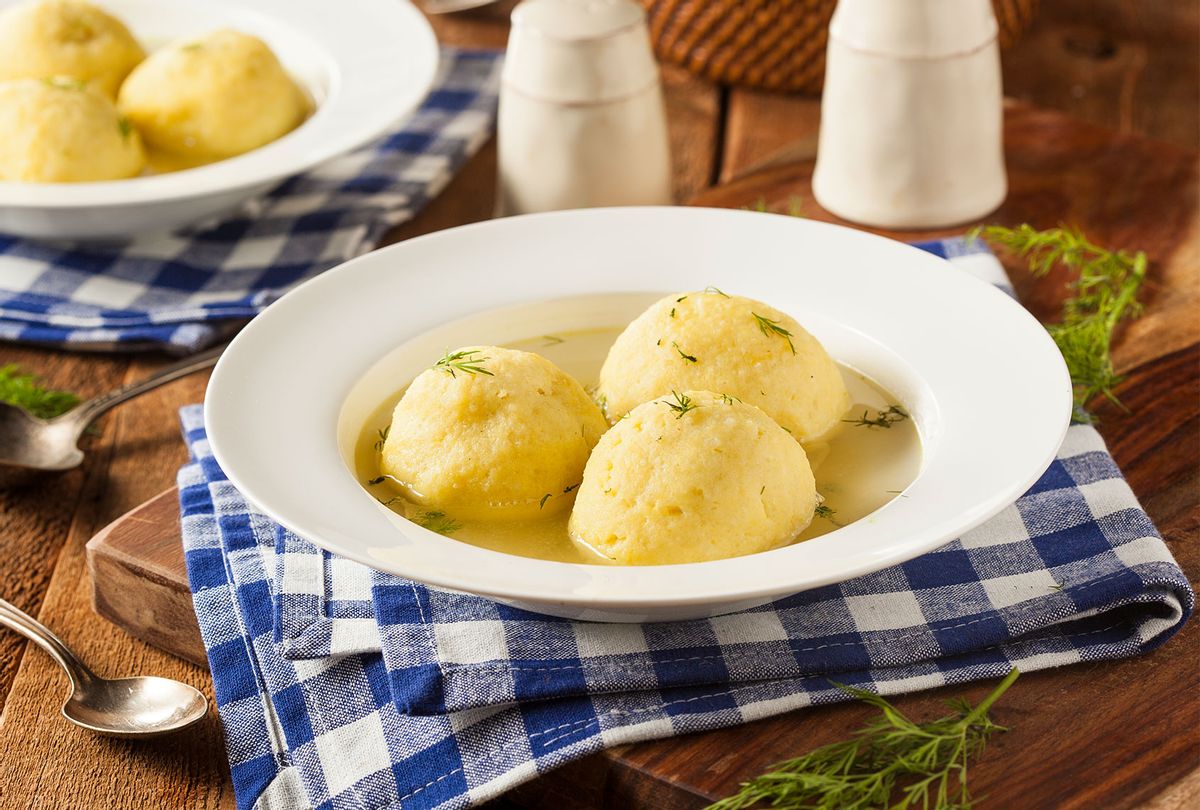 Last night, I sat down for a late dinner — well, curled up is honestly more accurate. I smooshed myself into the corner of my couch while draped in the largest and softest sweatshirt I own, and balanced a bowl of chicken soup between my knees. It was a kind of hybrid between chicken noodle and Italian wedding soup.

I started by rolling out some quick miniature meatballs made with some leftover ground chicken and sauteing them in a slick of olive oil. Once they browned, I pulled them out, set them aside and tossed in some garlic, roughly chopped white onion and a little leftover white wine to mingle with the browned bits. Once those were soft enough, I doused the whole thing in broth, added some frozen carrots and spinach, lemon zest, and a sprig of wilting rosemary that had been languishing in the fridge.

The soup simmered while I half-watched the "High Maintenance" episode with Ira Glass again, then tossed in some wagon wheel pasta which, Whole Foods has the audacity to brand as a "kid's cut." Once those were al dente, in went the meatballs for a quick stir. I ladled a huge spoonful into a bowl and topped it with  a little shaved parmesan and an embarrassing amount of oyster crackers.

I found the remote, began rewatching "Bored to Death" and took a bite of the soup; it was simple and earthy and bright. I washed it down with a drink of cold ginger beer and, for the first time in weeks, I felt truly soothed. I wasn't physically unwell — other than, you know, feeling weighed down by the often crippling anxiety that comes with living through a global pandemic — but the immediate sense of warming comfort that the meal provided me is a true case for making "sick day food" when you're sick of cooking.

We've talked about this concept of culinary fatigue a lot over the past couple weeks as part of Salon's "Burned Out" series. Thus far, we've covered how to grocery shop when you're sick of cooking and how to make the most of pre-made building blocks found in the freezer section.

This week's exploration of "sick day" food is more about mindset than instruction — preparing foods that are equal parts comforting and nourishing, and above all, require minimal energy to make. The point of this series at large is to get you excited (or at least not dreading) being in the kitchen again, and there's really nothing better for that than sitting down with a dish that prompts you to say, "I made this and I feel better for having done so."

Here are some of my favorite kinds of foods for that purpose.

There really is nothing more comforting than a hot bowl of soup. I have some definite favorites, which tend to kind of follow a theme — chicken and rice, chicken noodle, avgolemono, matzo ball soup. But there are lots of options. Earlier this year, Joseph Neese put together a list of some of the best soup recipes on Salon Food:

Whatever you choose, the benefits are the same when you're trying to break out of a cooking slump. Soup is the ultimate one-pot meal, which provides a momentary reprieve from the monotony of dish duty, and that one pot makes multiple servings (maybe freeze some for the next time you don't feel like cooking dinner from scratch?). Just don't forget the sleeve of Saltines.

If you typically take your oatmeal with brown sugar and cinnamon, this may sound like a bit of a stretch, but savory oatmeal is having a moment and for good reason: it's a nourishing, stick-to-your-ribs dish that you can doctor up to fit your tastes. Here are some of the basics:

There's that quote, "Simplicity is the essence of happiness," that, while ridiculously overused as an Instagram caption by wellness influencers, is honestly great advice in the kitchen. Sometimes two ingredients are such an ideal pair that it doesn't make sense to mess with perfection. Case in point, carbs and butter.

When I was a kid, buttered noodles were my go-to "sick day" food. White rice with a pat of golden butter was what got me though mono when I was in high school. Just last night, I found myself lusting after this Japanese Butter Knife and the promise of slathering golden curls of chilled butter onto thick slabs of toast.

Of course you can augment these dishes — add some cracked black pepper to your pasta, soy sauce to your butter rice or a drizzle of warmed honey to your toast — but also consider sticking to the basics, buying items that are just a touch nicer than what you typically buy. Fresh pasta, bakery-quality bread, cultured butter. It makes a difference.

Hydration is key when you're sick (of cooking). But seriously, there are drinks that I don't tend to consistently keep in the house unless I'm not feeling well. Ginger ale, jugs of orange juice, Sprite, coconut water.

Perhaps it's something different for you. My best friend, for instance, swears that Vitamin Water and matcha lattes heal her overnight. But trust me when I say it's going to help. "Self-care" is of those phrases that has become so culturally ubiquitous that it's almost been rendered meaningless, but ladling out a hot bowl of soup and pouring yourself a cold glass of whatever-your-choice seems like a pretty good place to start.