Deleted scenes from "The Beatles: Get Back" we'll never see

This (totally real) footage definitely won't show up in any future expanded cuts, either 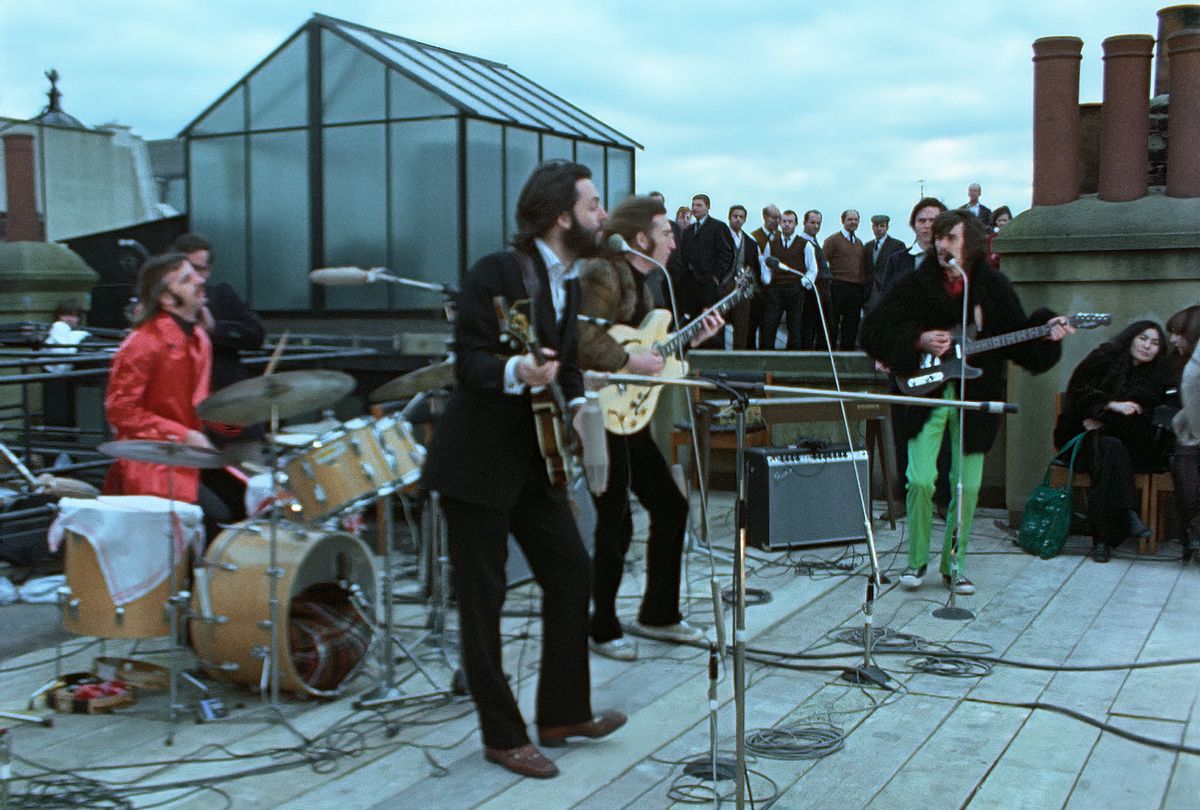 Peter Jackson's documentary series "The Beatles: Get Back" premiered on Disney+ over Thanksgiving weekend. The three-episode special, which ran 470 minutes, was culled from over 60 hours of original studio footage and 150 hours of audio recordings.

To preserve continuity, streamline themes, and get the final running time under eight hours, the following moments were edited out:

Day 1: Paul shows up to Twickenham Studios with 11 new songs, plus a formula for a future unknown pandemic vaccine he jotted down in the cab on the way over.

Day 2: Peter Sellers drops by Twickenham to say hello to Ringo, his co-star in the upcoming film, "The Magic Christian." The visit is cut short when Yoko Ono asks Sellers if he'll call her estranged husband's divorce lawyer and threaten him using the Clouseau voice.

Day 3: Paul, George and Ringo arrive to find John and Yoko have covered entire Twickenham Studios in bed sheets. Before passing out on scaffolding, John declares the Beatles "are bigger than Christo."

RELATED: If "The Beatles: Get Back" has a villain, it might be Michael Lindsay-Hogg

Day 4: George briefly quits band after Paul mildly criticizes the way he pats a pack of cigarettes against the palm of his hand.

Day 6: After lunch, the Hare Krishna invited to Twickenham by George rolls up rug, announces he's going back to school to become a substance abuse counselor. Recording engineer Glyn Johns convinces him to leave the rug or it'll be another nine hours reworking the acoustic levels.

Love the Beatles? Listen and subscribe to the "Everything Fab Four" podcast.

Day 7: (audio only) Alleged 30 minute screaming match between Paul and John. Audio is determined unusable because microphone was hidden in a flower pot two doors down from studio at Twickenham Florists.

Day 8: George briefly quits band after John explains why he referred to Glyn Johns as the stage actress-singer "Glynis Johns." George claims he had already come up with that nickname, but no one heard it because he's the Quiet Beatle. During the heated seven-minute argument, Paul writes complete lyrics to "Send in the Clowns" on the back of a napkin, shoves it into his vest pocket, where it remains for three and a half years until mysteriously discovered in Manhattan by Stephen Sondheim's dry cleaner.

RELATED: In 1969, the fifth Beatle was heroin

Day 9: 28th take of "The Long and Winding Road" is ruined when Yoko loudly tucks hair behind ear.

Day 9-10: After Beatles move out of Twickenham to Apple Studios, eight hours of overnight security footage of Gerry and the Pacemakers, the Dave Clark Five, Freddie and the Dreamers and Cliff Richard rummaging through garbage looking for lyrics.

Day 10: Longtime road manager Mal Evans is briefly fired after he lingers too long on the loading dock and is not available to write down 112 lyric changes to "Let it Be," plus two dozen added ingredients to Paul's recipe for Shepherd's Pie.

Day 11: Upon advice from future Beatles manager Allen Klein, John signs a waiver with Lindsey-Hogg permitting footage from any future colonoscopy to be used in documentary.

Day 12: George briefly quits band when Ringo dresses up as a mystic (putting snare drum tea towel over his head) and predicts he will one day be sued by the Chiffons for plagiarism.

Day 13: Executives from EMI show up and present each member of band with Platinum Ash Tray, representing one million cigarettes snuffed out during recording session.

Day 14: Yoko gets only laugh in 60 hours of footage when she announces she's changed her name to Michael Lindsey-Hoko.

Day 17: Rehearsal canceled after Beatles electronics guru "Magic Alex" Mardas tries to connect George's rosewood Telecaster through both the Leslie cabinet and the late Leslie Howard. George is furious rehearsal is canceled before he can quit band.

Day 20: 13-year-old London native Hilary Farr (nee Labow), 40 years from hosting "Love it Or List It," convinces Apple receptionist to give her £5,000 out of petty cash to upgrade and stage rooftop.

Day 21: As band listens to booth mix of rooftop concert, George finally gets some attention, winning the daily "Thinnest Beatle" contest and breaking John's 20-day streak. The prize, a half-eaten biscuit, is presented by Peter Sellers dressed as Twiggy.

DAY 386: Despite being given combination to Apple master tape vault by John and Allen Klein, Phil Spector shoots locks off anyway.

DAY 18271:  22 minutes of Peter Jackson's personal assistant on hold with Disney+ customer service before being disconnected.

Get Back Humor The Beatles