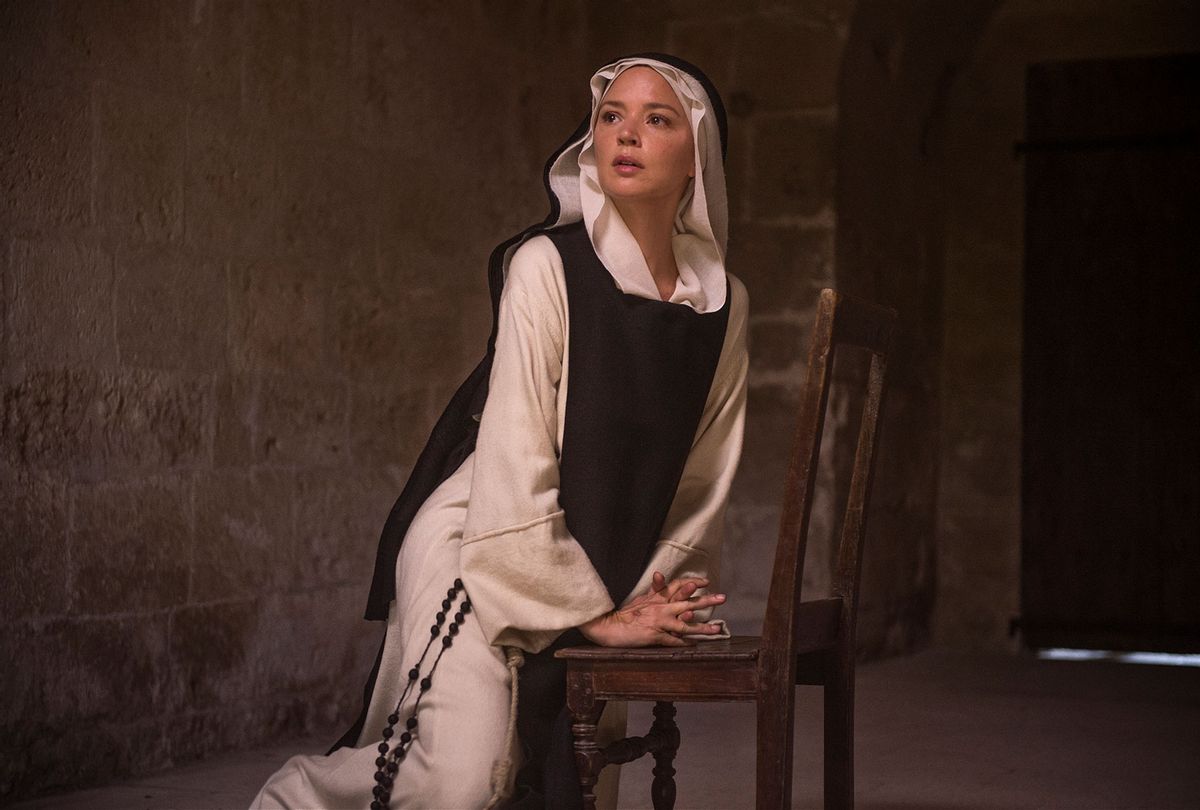 The film itself isn't perfect – something gets lost between the homage to 1970s nunsploitation and a genuine interrogation of faith and desire – but it's the response from audiences and critics alike that is telling. When you read the words "lesbian nuns," you instinctively know that this isn't going to be a sober examination of homophobia and misogyny within the Catholic church.

"You know how us Catholic girls can be," Alanis Morrisette snarled on "Jagged Little Pill" in 1995. "We make up for so much time a little too late." Two years later a Guinness advert claimed that "36% of strippers have a convent education," admitting in the next breath that this was a made up statistic – but didn't it feel true? The cliché of Catholic schoolgirls as embryonic sluts, simmering in the pop culture lexicon since Ken Russell's "The Devils" was released in 1970s, came to the boil in the last decade of the millennium as long-standing sexual abuse scandals in the Catholic church hit the headlines.

The Act of Uniformity in 1662 had formalized the Church of England and limited the rights of Catholics to worship publicly or stand for political office, but it was the intellectual movement prioritizing reason over superstition that helped relegate it to a relic of less evolved times.

Before the 1700s, religion was the sole method of interpreting human experience in the Western world. As new philosophies entered cultural currency, the meaning bled out of what were once essential tools arbiting the relationship between God and man; now they were simply props. Political anti-Catholic propaganda capitalized on this, and by the Victorian era, symbols of Catholicism were now seen through a filter of eroticism. Even the idea of the sexy nun costume dates back to at least the 1890s according to Toulouse Lautrec who witnessed them at the infamous Rue des Moulins brothel.

Anti-Catholic propaganda as entertainment came about as the pushback against Catholic oppression began to take force. The Roman Catholic Relief Act of 1829 removed most of the restrictions put in place in 1662 and the century saw Irish immigration that boosted Britain's Catholic population from 30,000 at the start of the century to 750,00 by the middle. The possibility of unfettered Catholicism in Britain, with its treasonous allegiances to a foreign leader in the Pope, was condemned heavily by The Times as a threat to the British way of life.

Xenophobia mingled with the recent – and bloody – fights over Catholic vs. Protestant rule was presented as a threat not only to the British way of life and the family, but to virtue itself.  According to "The Confessional Unmasked," a 19th century book purporting to be a glimpse into the secret and torrid life of papists, Catholic priests used the sanctity of the confessional to rape women, and secret entrances were built into convents to allow them to enter nuns' bedrooms. In what became known as "the great convent scandal," stories in the press abounded of young Protestent women forced into nunneries where they were made to convert, endure flagellation and to serve priests sexually. Few, if any, of these were provable but it whipped up a frenzy that saw public protests, popular songs threatening violence against bishops and Cardinals and an entire genre of Gothic fiction that saw its young heroines imprisoned in convents against their will.

Ann Radcliffe's "The Mysteries of Udolpho," devoured by Catherine Morland and parodied by Jane Austen in "Northanger Abbey" features a woman in a nun's habit that perfectly encapsulates the fetishized dichotomy of religious chastity and unbridled sexuality. The hugely popular novel, whose readers were mostly women, presents, "her countenance . . . partly shaded by a thin black veil, and touched . . . with inimitable softness. Hers was the contour of a Madonna, with the sensibility of a Magdalen."

Of course, there were more salacious options on offer if one wanted to truly empathize with the poor innocent – and nearly always attractive – young women seduced into a life of Communion wafers and secret vice. "The revolting crimes of Monks, and the horrible fate of Females inveigled into Nunneries by Catholic Priests," as it was described in "The Appalling Record of Popish Converts and the Awful Disclosure of Tortured Nuns," became the locus for a socially acceptable form of pornography that marked Catholicism out as not only other, but dangerous.

RELATED: 15 sexual hang-ups we can blame on the Catholic church

These were presented as true accounts, but tellingly these days Google categorizes "The Confessional Unmasked" under not only Fiction but also Erotica. Increasing religious tolerance and shifting political priorities replaced Catholicism in the popular imagination by other cultural "threats" such as the suffragettes and homosexuality by the early 20th century, and it wasn't until the 1970s that it resurfaced in the campy sister-on-sister action of nunsploitation. By that point the Church itself was modernizing in some areas, but stood firm against the sexual revolutions underway.

"Benedetta" comes after Andrew Scott's Hot Priest won the hearts and groins of viewers everywhere, Mike Flanagan turned his horror gaze to the church in "Midnight Mass" and UK series "Derry Girls" gained a cult following. Once again, Catholicism is having a pop culture moment – but now it has a very different cultural context to contend with. Lesbianism onscreen is no longer confined to the institutional homosexuality of prisons and convents, so Voerhoven has to up the ante to give his audience thrills. By an accident of timing, the plague that threatens the convent and the surrounding areas feels more immediate – and dangerous – than the lingering shots of naked novitiates.

Reviewing the film for Autostraddle, critic Drew Gregory noted, "If you go into 'Benedetta' wanting sacrilege, you will technically find it. But if you're queer, sacrilege is nothing new." Sapphic sex behind cloistered walls is no longer enough to shock when the Catholic church itself is grappling with the meaning of sexual sin and the role of LGBTQ worshippers, and the zeitgeist has refocused its attention on Islam as the foreign religious threat of the moment, using much of the same language as the Times did back in 1850.

Critical reception has been mixed. Verhoeven is an accomplished filmmaker who deserves his reputation, and the film is visually stunning. But as the Catholic church creaks into the 21st century and queer media is having a heyday, "Benedetta" feels like a relic of a previous time, much as the confessional and transubstantiation felt to a world embracing the new ideas of the Enlightenment.

"Benedetta" is available in select theaters and on demand. Watch a trailer for it below, via YouTube.